Given their outstanding versatile properties, multilayered anticorrosion coatings have drawn great interest from researchers in the academic and engineering fields. However, the application of multilayered coatings is restricted by some limitations such as low interlayer compatibilities, the harsh preparation process, etc. This work introduced a composite film fabricated on a 2A12 aluminum alloy surface, including an anodic oxide film, a sol–gel film, and a layer-by-layer (LBL) self-assembling film from bottom to top. The microstructure and elemental characterization indicated that the finish of the coating with the LBL film resulted in a closely connected multilayered coating with a smoother surface. The anticorrosion performance was systematically evaluated in the simulated corrosive medium and neutral salt spray environment. The integrated coating with the LBL film presented an excellent anticorrosion ability with system impedance over 108 Ω·cm2 and a self-corrosion current density two orders of magnitude lower than that of the other coatings. After the acceleration test in a salt spray environment, the multilayered coatings could still show a good protective performance with almost no cracks and no penetration of chloride ions. It is believed that the as-constructed multilayered coating with high corrosive properties and a fine surface state will have promising applications in the field of anticorrosion engineering. View Full-Text
Keywords: multilayer; corrosion; impedance; layer-by-layer multilayer; corrosion; impedance; layer-by-layer
►▼ Show Figures 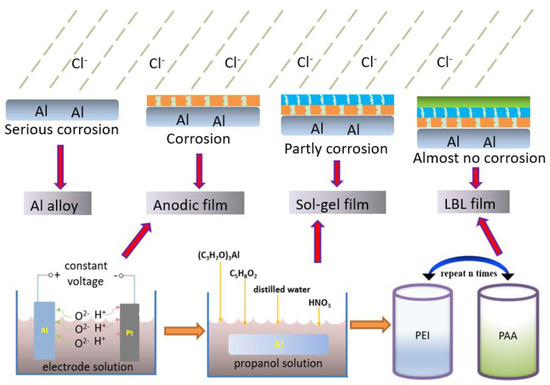