Scanning 3DXRD Measurement of Grain Growth, Stress, and Formation of Cu6Sn5 around a Tin Whisker during Heat Treatment

The 3D microstructure around a tin whisker, and its evolution during heat treatment were studied using scanning 3DXRD. The shape of each grain in the sample was reconstructed using a filtered-back-projection algorithm. The local lattice parameters and grain orientations could then be refined, using forward modelling of the diffraction data, with a spatial resolution of 250 . It was found that the tin coating had a texture where grains were oriented such that their c-axes were predominantly parallel to the sample surface. Grains with other orientations were consumed by grain growth during the heat treatment. Most of the grain boundaries were found to have misorientations larger than 15, and many coincidence site lattice (CSL) or other types of low-energy grain boundaries were identified. None of the grains with CSL grain boundaries were consumed by grain growth. During the heat treatment, growth of preexisting Cu6Sn5 occurred; these grains were indexed as a hexagonal phase, which is usually documented to be stable only at temperatures exceeding 186 . This indicates that the phase can exist in a metastable state for long periods. The tin coating was found to be under compressive hydrostatic stress, with a negative gradient in hydrostatic stress extending outwards from the root of the whisker. Negative stress gradients are generally believed to play an essential role in providing the driving force for diffusion of material to the whisker root. View Full-Text
Keywords: tin whiskers; scanning 3DXRD; stress; Cu6Sn5 tin whiskers; scanning 3DXRD; stress; Cu6Sn5
►▼ Show Figures 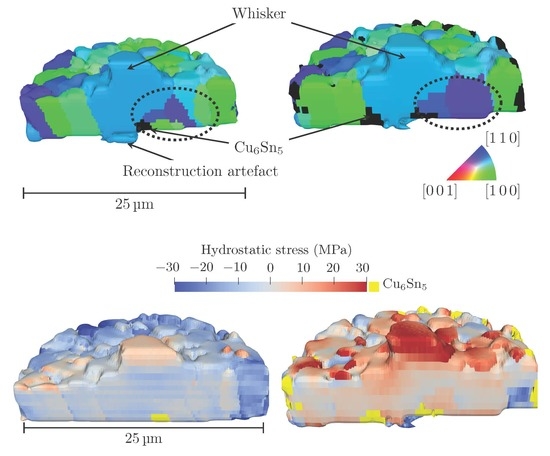