In Situ Formation of TiB2 in Fe-B System with Titanium Addition and Its Influence on Phase Composition, Sintering Process and Mechanical Properties
Previous Article in Journal

The aim of the study was to clearly determine whether selected modern medical materials and three dimensional printing allow for satisfactory viability of human osteoblasts, which is important from the point of view of the subsequent osseointegration process. Moreover, as implants are produced with various topography, the influence of surface roughness on viability of bone cells was evaluated. To conduct the research, primary human osteoblasts (PromoCell) were used. Cells were seeded on samples of glass-reinforced polyetheretherketone (30% of the filling), Ti6Al4V manufactured with the use of selective laser melting technology and forged Ti6Al4V with appropriately prepared variable surface roughness. To assess the viability of the tested cells the 3-(4,5-dimethylthiazol-2-yl)-2,5-diphenyltetrazolium bromide was used. Results showed that all evaluated materials do not exhibit cytotoxic properties. Moreover, on their basis it can be concluded that there is a certain surface topography (designated i.a. as roughness equal to approx. Ra = 0.30 μm), which ensures the highest possible viability of human osteoblasts. On the basis of the received data, it can also be concluded that modern glass-reinforced polyetheretherketone or Ti6Al4V produced by rapid prototyping method allow to manufacture implants that should be effectively used in clinical conditions.
Keywords: biomedical material; cytotoxicity; osteoblasts; sinister laser melting; surface roughness biomedical material; cytotoxicity; osteoblasts; sinister laser melting; surface roughness

2.1. Preparation of Samples and Modifications of Their Surface

In order to conduct the research, nine samples of PEEK GRF30, Ti6Al4V SLM as well as forged Ti6Al4V were prepared. The samples were cylindrical with a diameter of 10 mm and height of 5 mm. PEEK GRF30 samples were manufactured by injection molding, Ti6Al4V SLM samples were created with consideration of appropriate laser beam’s parameters (diameter = 0.10 mm, power = 190 W, speed = 500 mm/s, energy density = 127 J/mm3, porosity < 0.5%) and thickness layer of 0.03 mm with subsequent recrystallization annealing (850 °C for two hours), while Ti6Al4V by forging (at 900 °C) also with subsequent recrystallization annealing (800 °C for one hour). The front (tested) surfaces of the samples were machined first with sandpaper using its gradation from 120 to 2000.
Subsequently, front faces of eight samples of each material (leaving one polished) were mechanically damaged by their single and manual linear displacement of 100 mm sandpaper surface. Constant pressure was maintained during the movement of the sample. Each of eight samples was treated with sandpaper of different gradation: 240, 400, 600, 800, 1000, 1200, 1500 and 2000. The obtained surface roughness reflects the possibility of implant damage during i.a. its pressing into reamed medullary cavity, that generates high stresses in the process, as was indicated in the one of the authors recent paper [40].
The surfaces were then examined using a confocal microscope (LEXT OLS4000, Olympus Tokyo, Japan) to determine the effect of the previously performed modification in the surfaces roughness. In the microscope’s software, nine profile lines with a length of 100 μm were applied to the central part of the sample at fixed distances of 10 μm (Figure 1). For the profiles obtained, the individual surface roughness was determined (Ra1–9, Rp1–9, Rv1–9 and Rz1–9). Afterwards, their values were averaged to approximate the overall surface roughness for the tested sample.

2.2. Evaluation of Primary Human Osteoblasts with the Use of MTT Test

3.1. The Influence of Mechanical Treatment on Surface Roughness

Figure 7 shows the viability of osteoblasts in relation to the roughness of tested materials.
Table 1 presents all the obtained values of the remaining parameters clearly defining the topography of the obtained surfaces to clearly present their influence on osteoblasts viability.
Finally, Figure 8 presents the average viability of cells on the tested materials to the overall evaluation of their cytotoxicity.
When analyzing results presented in current subsection, a significant difference between the cells viability of the tested materials is observable. For surface roughness of Ra ≤ 0.3 μm, cells viability on Ti6Al4V was nearly twice as high as in the case of PEEK GRF30. For Ra > 0.3 μm, cells viability on both materials was similar. It can also be noted that the optimal roughness, in the case of the materials tested, was approx. 0.2–0.3 μm (maximum cells viability was 176.03%, for Ti6Al4V with Ra = 0.2 μm while the highest viability of 131.15% for PEEK GRF30 was with of Ra = 0.29 μm). What is more, further analysis can also indicate that for polished PEEK GRF30 sample (Ra = 0.18 μm), cell viability was below 70% (in this case the viability was 62.72%). This suggests the lack of sufficiently high biocompatibility and the need to change the surface condition of polished PEEK GRF30.
When analyzing the results for Ti6Al4V SLM, it can be noticed that, as in the case of two other materials, the viability of osteoblasts rises with the increase of roughness from the one obtained during the polishing process. It should be taken into account that surface state characterized by Ra = 0.30 μm also allowed to achieve the highest possible cells viability. Again, with further increase in surface roughness, osteoblasts viability was decreasing however, it was maintained on higher level in relation to PEEK GRF 30 and Ti6Al4V. It can be caused by the presence of microholes formed in the process of 3D printing, which most likely improve the surface topography in terms of cells viability.
The results suggest that there may exist a certain surface condition, different from polished, on which osteoblast cells are characterized by a higher viability. This statement is confirmed in the available literature, according to which the Ra value of 0.3 μm, is optimal for achieving adequate cell viability [45]. This is also confirmed by other studies, which state that external cracks on surfaces can positively affect the viability of osteoblasts [46].
The results obtained also indicate that the cell viability was small for significant roughness, i.e., in this case resulting from the machining outer surface of the material with the low gradation sandpaper. Surface damage may occur during the implantation of press-fit implant (due to the high stresses) like an implant for direct skeletal attachment of limb prosthesis. It can result in reduction of its biocompatibility and consequently lowered possibility of obtaining appropriate primary stabilization. This would explain the reason for removal of ITAP implants from individual cases of its use in dogs after limb amputation due to osteointegration failure [20].
A similar effect on the cells viability can be noticed while analyzing the influence of three more parameters describing surface topography (i.e., Rp, Rv and Rz). On their basis it can be also concluded that the roughness slightly higher than the one obtained after polishing, allows us to increase osteoblasts viability. This confirms previously presented conclusions determined on the dependency presented in Figure 8.

In the future the authors plan to conduct the evaluation of cytotoxicity of PEEK GRF30 and Ti6Al4V SLM with consideration of different topographies, which were considered in the presented study, as well as to use more samples in order to obtain more comprehensive research. Different topographies could be created via mechanical treatment, carried out in more than one direction to create, e.g., bidirectional, circumferential or random damage in samples surface. This could provide a better understanding of the influence of various roughness on human osteoblasts viability. Moreover, the authors also consider examining the effect of wear particles on the cells response as some studies suggest that above-mentioned debris may have a potential role in bone resorption around orthopaedic implants.

Cells viability studies are basic research conducted to evaluate biocompatibility of the implant, allowing us to estimate the tissue response after its implantation. The study with the use of MTT test, presented in the paper, allowed the initial evaluation of functionality of PEEK GRF30, Ti6Al4V SLM and Ti6Al4V in post-implantation conditions in typical polished state or after surface damage in longitudinal direction.
The general results indicate that the biocompatibility requirements were fulfilled by all of the tested materials. However, when selecting appropriate material for implants, surface roughness should be taken into account, which could significantly influence the viability of human osteoblasts.

This research was funded by National Science Centre, Poland, grant number 2016/23/N/ST8/03526 and the APC was funded by Ministry for Science and Higher Education, project number S/WM/1/2017. 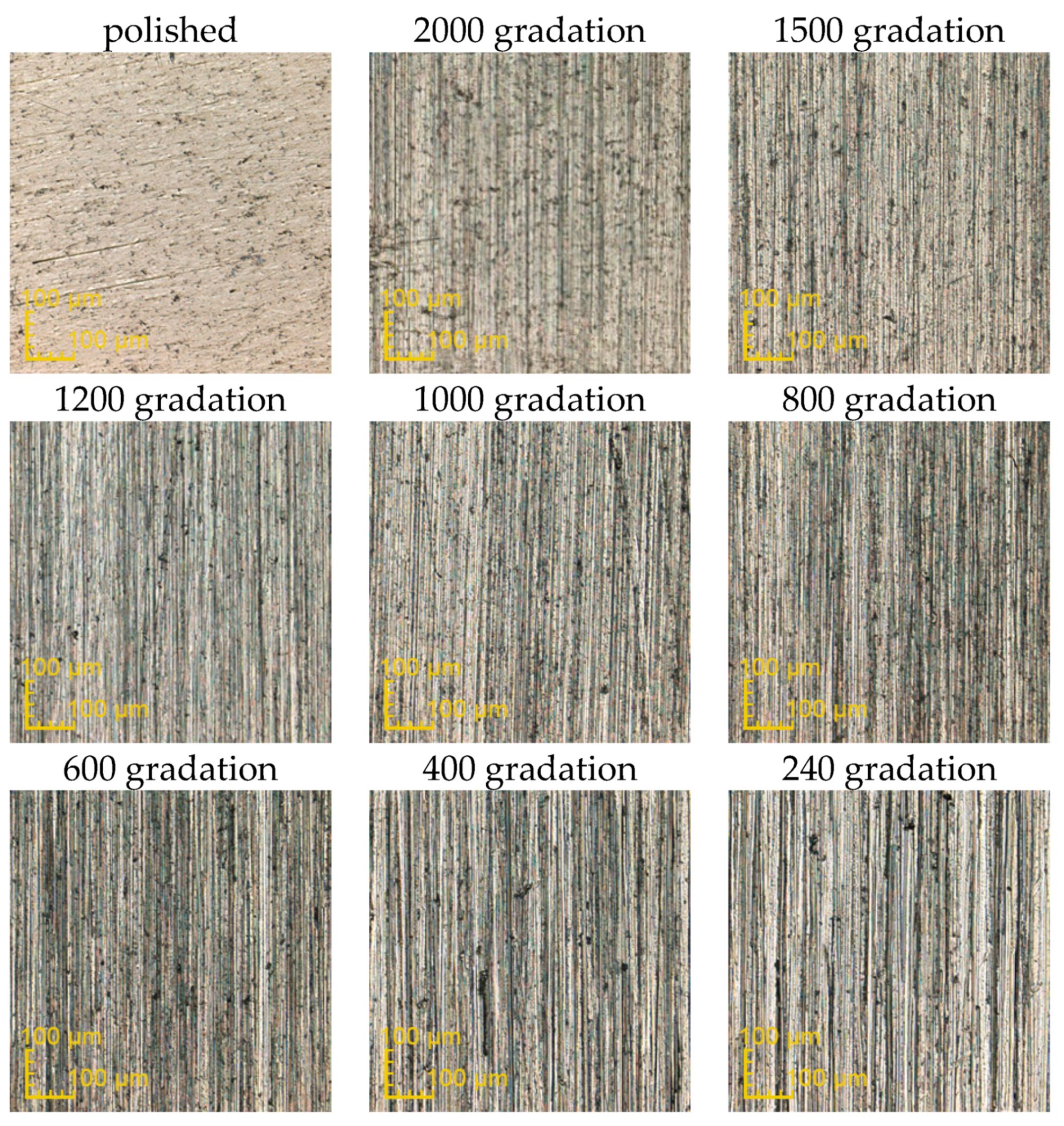 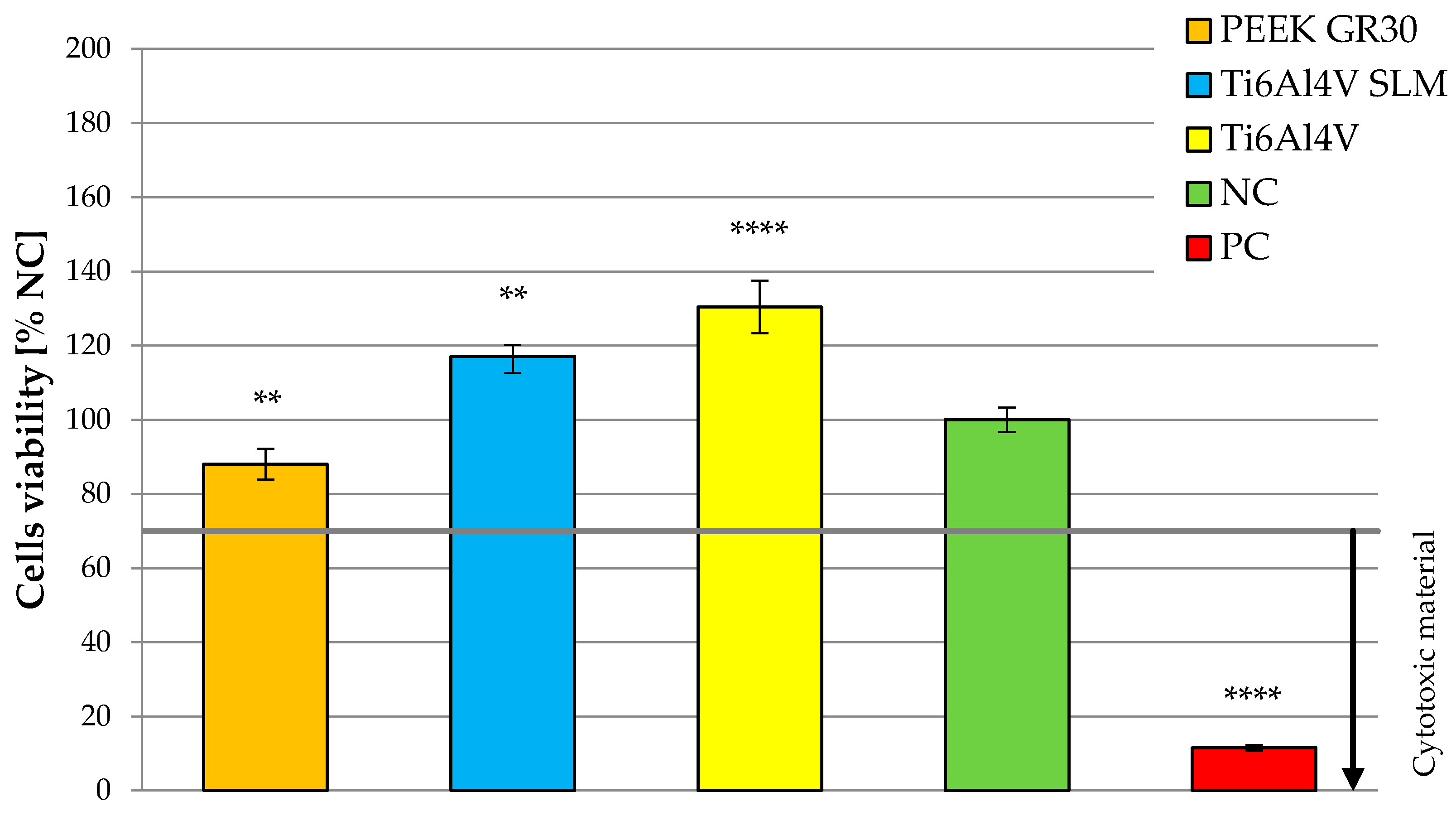