:
Porous materials derived from natural resources, such as Luffa sponges, pomelo peel and jute fibres, have recently emerged as oil adsorbents for water purification, due to their suitability, low environmental impact, biodegradability and low cost. Here we show, for the first time, that the porosity of the fruiting body of polypore mushrooms can be used to absorb oils and organic solvents while repelling water. We engineered the surface properties of Ganoderma applanatum fungi, of which the fruiting body consists of a regular array of long capillaries embedded in a fibrous matrix, with paraffin wax, octadecyltrichlorosilane (OTS) and trichloro(1H,1H,2H,2H-perfluorooctyl)silane. Morphological and wettability analyses of the modified fungus revealed that the OTS treatment was effective in preserving the 3D porosity of the natural material, inducing super-hydrophobicity (water contact angle higher than 150°) and improving oil sorption capacity (1.8–3.1 g/g). The treated fungus was also inserted into fluidic networks as a filtration element, and its ability to separate water from chloroform was demonstrated.
Keywords:
biomimetics materials; porosity; oil/water separation; micro-tubes

Porous materials with special wettability (super-hydrophobicity and lipophilicity) find application as membranes and sponges for water and wastewater treatment [1,2,3,4,5,6]. They combine engineered wetting properties (water contact angle higher than 150°, sliding angle lower than 10°, and low oil contact angle) and interconnected porosity to repel water while promoting the flow of oily substances and other pollutants through the pores.
In recent years, oil adsorbents based on natural porous materials have emerged as potential candidates for oil-water separation because they are abundant, sustainable, biodegradable and inexpensive [7]. Recent papers have reported on the super-hydrophobic treatments of natural Luffa sponges (Luffa cylindrica). They are formed of a three-dimensional (3D) network of cellulose-based microfibres [8]. Polyhedral oligomeric silsesquioxane [9], fluorinated silica nanoparticles [10] and waterborne polyurea adhesives containing silica nanoparticles [11] have been used to functionalise Luffa sponges. The treated sponges were characterised by a water contact angle (WCA) between 152° and 156°, and an oil absorption capacity (diesel, vegetable oil, chloroform and toluene) in the range of 3–10 g/g. In another study, the porous, honeycomb-like internal structure of pomelo peel (Citrus maxima) was modified with acetic anhydride and styrene to enhance the sorption of diesel and lubricating oil [12]. Untreated pomelo peel exhibited a WCA of 82° and sorption capacity of 6 and 9 g/g for diesel and lubricating oil, respectively. Modified peels showed an increased WCA (up to 128°) and a maximum oil sorption capacity of 19 and 26 g/g for diesel and lubricating oil, respectively. The regular micro-porosity of jute fibres has also been used to create oil sorbents [13]. The jute fibres were functionalised with silica via the sol-gel method and subsequently made hydrophobic (WCA of 136°) with octadecyltrichlorosilane (OTS). The maximum adsorption capacity of the treated fibres was 8 g/g for diesel. In another study, silk fibres were modified with an environmentally friendly enzyme-etching approach and then functionalised with methyltrichlorosilane to achieve super-hydrophobicity (WCA between 140° and 160°) and oil-water separation [14].
Here, we study how the 3D porous structure of the fruiting body of polypore fungi (also known as bracket fungi) of the genus Ganoderma can be functionalised to achieve super-hydrophobicity and enhanced oil sorption. The Ganoderma genus comprises of mushrooms that grow on decaying logs or tree stumps (Figure 1a) and are widely studied for their bioactive polysaccharides and triterpenoid compounds that have antioxidant, antitumor and antibacterial properties [15,16,17]. So far, macro- and microscopic features of these fungi have been primarily investigated for taxonomic purposes [18,19]. In this work, we show, for the first time, that the unique porous structure of the fruiting body of Ganoderma is advantageous to create systems with engineered water and oil absorption capacity. We selected Ganoderma applanatum for its porosity that is characterised by tubular long pores embedded in a fibrous matrix. We treated the fungus with paraffin wax (PFW), OTS or trichloro(1H,1H,2H,2H-perfluorooctyl)silane (FOTS) to achieve high WCA (higher than 150° in some cases) and high oil sorption. We demonstrated that the modified fungus can be used as a recyclable oil sorbent and can be embedded in plastic tubes to create a filter media for oil-water separation.

Static water contact angle (WCA) and oil contact angle (OCA) of treated G. applanatum samples were measured using a DataPhysics OCA 20 instrument (Filderstadt, Germany), using 5 μL droplets at ambient temperature. An average of 10 different zones per sample were analysed. Advancing and receding angles were measured by increasing and reducing the volume of a 5 μL water droplet. Images were recorded and evaluated every 1 µL.
The morphology of the pristine and treated G. applanatum sample surfaces was analysed using the Scanning Electron Microscope (SEM) Hitachi TM3030 (Tokyo, Japan) using an acceleration voltage of 15 kV. Prior to transferring the samples into the SEM chamber, a conductive layer of 90s gold/palladium (Au/Pd) was deposited onto the sample surface using a Quorum Q150T ES sputter (Laughton, UK).
The X-ray diffraction (XRD) analysis was carried out by a Bruker D2 PHASER (Billerica, MA, USA) desktop diffractometer with a rotating copper anode CuKα (wavelength λ = 0.1542 nm) in the transmission mode (30 kV, 10 mA). A 2θ angle in the range of 5–40° was scanned at a speed of 1 °/s.
The maximum oil sorption capacity of the treated samples was evaluated via immersion into the oils and organic solvents for 5 min. Then, the samples were suspended for 30 s to remove the excess of oil and organic solvent, and weighed on a digital balance. The weights of the samples before and after oil absorption were used to calculate the maximum sorption capacity according to the following formula: where (%) is the sorption capability, and are the weights of samples before (dry sample) and after (wet sample) the oil sorption, respectively.
The recyclability and possibility of reusing the OTS-modified G. applanatum samples for sorption of organic liquids was also investigated. Three samples were immersed in dioxane for 5 min and, after removing the oil excess, weighted to estimate the maximum sorption capacity. Then, the samples were washed in ethanol and dried overnight in a desiccator at 50 °C. This procedure was repeated 3 times.
The abrasion resistance of the treated samples was evaluated by a multistep dry manual test. The sample surface was abraded firmly with a gloved hand (300 mm nitrile glove) using a back and forth movement for 50 times [20]. The wetting properties of the abraded samples were then analysed.
Statistical analysis was performed on independent trials, which were repeated at least three times. Mean and standard deviation (SD) were calculated. One-way analysis of variance, followed by Tukey’s multiple comparison test, with a confidence interval of 95% for mean, was used to analyse the results by Minitab software (p < 0.05).

In this study, we show that Ganoderma fungi can be considered a source of 3D biodegradable porous materials with low environmental impact for oil/water separation applications. These fungi are widely available as they are involved in the natural decomposition of dead wood. Here, we treated the fungi surface with silane-based self-assembled monolayers, which are widely used to make a variety of materials super-hydrophobic [45]. The fungi were used without further processing, but pyrolysis can be implemented in the future to reduce the initial weight of the fungi. We obtained oil sorption capacities that were lower than those reported for synthetic sponges and membranes [46,47,48], but comparable to those of natural, non-pyrolyzed fibrous materials. The chemical components of the fungi (glucans and chitin) are mainly water-insoluble and resistant to organic solvents and acid solutions [49,50,51], making these porous systems stable in harsh environments. This work opens the way to a novel use of Ganoderma fungi as filtration/purification elements that can also be integrated into fluidic devices and used to separate emulsified oil from water.

The authors acknowledge the use of the facilities in the Loughborough Materials Characterisation Centre, Department of Materials. 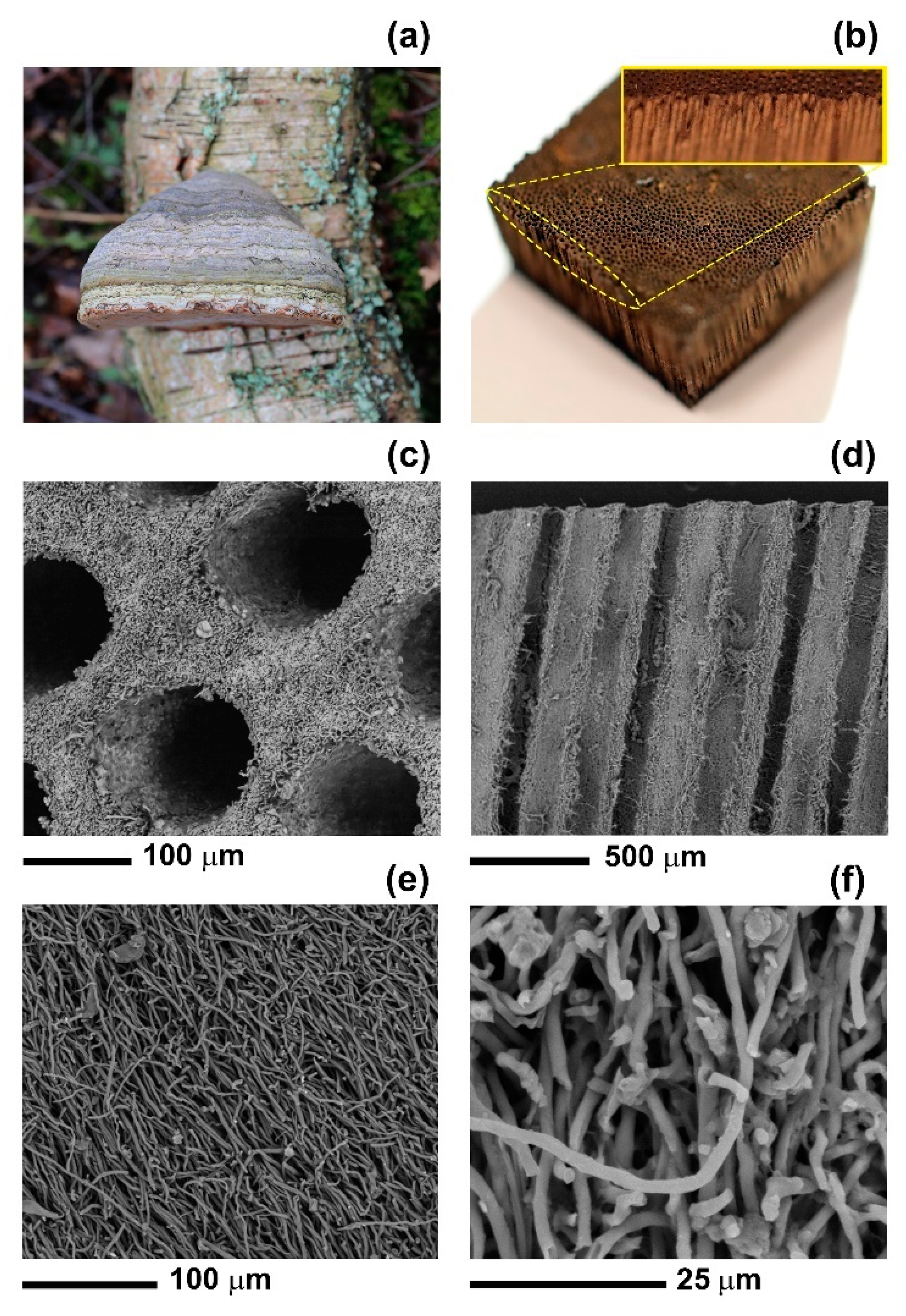 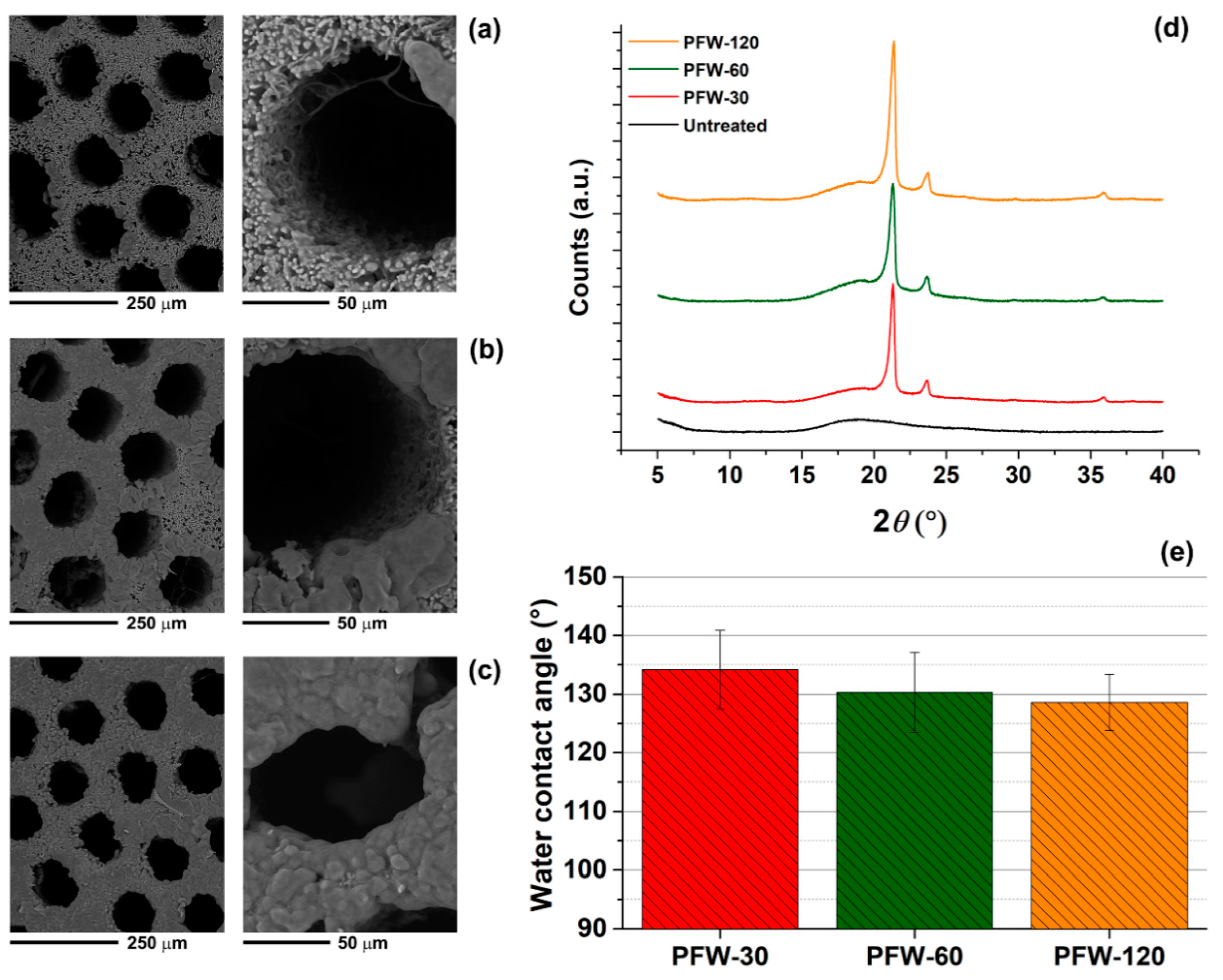 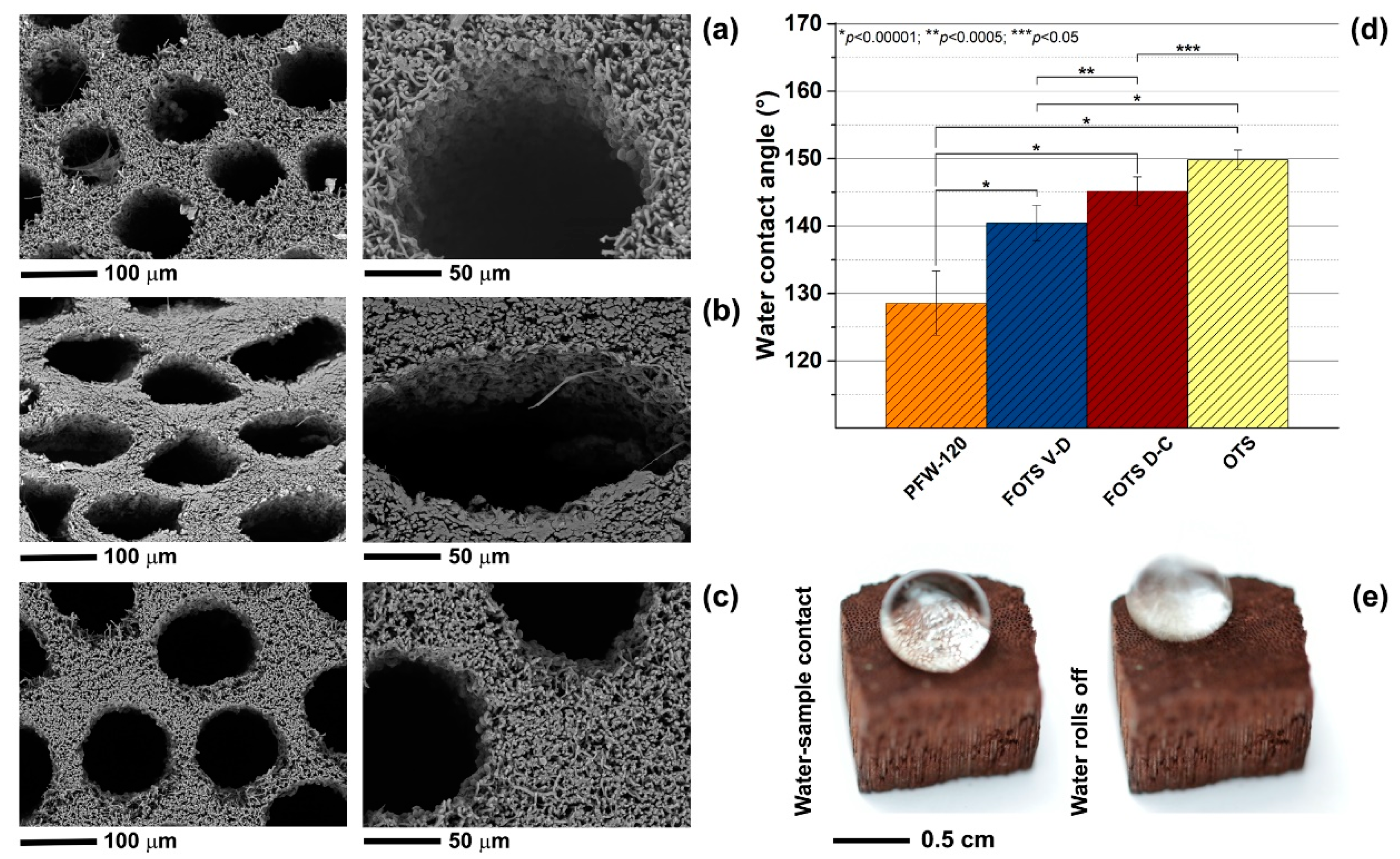