Compacted graphite iron is the material of choice for engine cylinder heads of heavy-duty trucks. Compacted graphite iron provides the best possible compromise between optimum mechanical properties, compared to flake graphite iron, and optimum thermal conductivity, compared to spheroidal graphite iron. The vermicular-shaped graphite particles, however, act as stress concentrators, and, as a result of delamination from the metal matrix, they are responsible for crack initiation during the thermomechanical fatigue cycles occurring through engine startup and shutdown cycles. Scratch tests driven over the matrix and into the graphite particles were performed in order to characterize the strength of the metal–graphite interface. Samples extracted from a cylinder head in as-cast condition were compared to samples subjected to a heat-treatment at 700 °C for 60 h. The former samples were composed of a primarily pearlitic matrix and graphite particles (~11.5 vol %), whereas, after annealing, a certain pearlite fraction decomposed into Fe and C, producing a microstructure with graphite–ferrite interfaces, exhibiting a partially spiky morphology. The scratch test revealed that the ferrite–graphite interfaces with spiky nature exhibited a stronger resistance to delamination compared to the ferrite–graphite interfaces with smooth morphology. One reason for the high interface strength is the mechanical interlocking between graphite spikes and ferrite, increasing the contact area between the two phases. View Full-Text
Keywords: bonding strength; scratch test; compacted graphite iron bonding strength; scratch test; compacted graphite iron
►▼ Show Figures 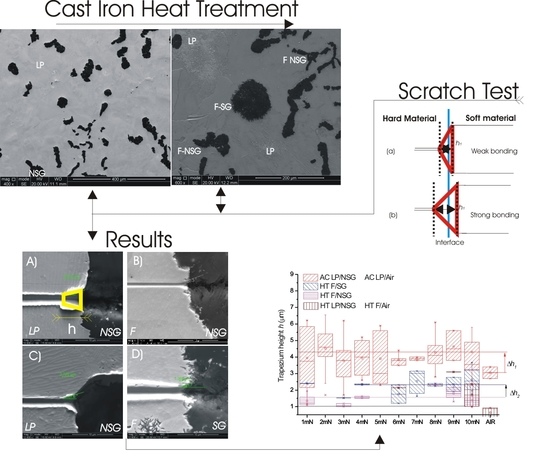