Some binary and ternary intermetallic compounds based on nickel, aluminum, titanium, and iron excel in properties like good mechanical properties, shape memory, thermal stability, and also low density. For example Ti-Al alloys with low density and at the same time high mechanical properties are appropriate for aerospace industry. The addition of silicon improves the oxidation resistance at high temperatures [1]. The approximately equimolar Ni-Ti alloy is a well-known shape memory material. The shape memory effects are caused by non-diffusion phase transformation between austenite (high-temperature cubic structure) and martensite (low-temperature monoclinic structure) in the NiTi intermetallic phase. Intermetallics are usually produced by conventional melting and casting methods such as vacuum induction melting (VIM) and vacuum arc re-melting (VAR) [2]. These production methods are expensive and problematic due to high reactivity of melt and poor casting properties. The carbon crucibles react with the melt. Therefore the special crucibles coated by zirconia or yttria must be used for Ni-Ti alloys and the production price grows [3]. Powder metallurgy offers perspective methods of production of Ni-Ti alloys and other intermetallic compounds [2,4,5,6,7,8]. The elemental powders are mixed and pressed and consequently the pressed powder mixture compact is heated to the ignition temperature (which is lower than the melting point). The exothermic combustion reaction is initiated and leads to the formation of intermetallic phases. If the whole compressed compact is heated at the same time, the process is called ‘thermal explosion mode of self-propagating high-temperature synthesis’ (TE-SHS). If the heat source is focused only on one side of the compressed powder mixture compact and the reaction goes through the compact gradually, the mode of SHS reaction is called ‘plane wave propagation mode’ [9]. In the binary Ni-Ti system, the eutectic temperature 942 °C has been stated to be the initial temperature of the SHS reaction in some publications [10]. The initial temperature of approximately 890 °C was found out and the start of reaction is connected with α→β titanium transformation at the temperature of 882 °C [7]. The influence of heating rate, temperature of reactive sintering, particle sizes of nickel and titanium powders on microstructure, phase composition, and porosity were investigated in many publications [4,10,11,12,13].
The addition of aluminum into the near equiatomic Ni-Ti powder mixture was researched and the decrease of porosity and improvement of corrosion resistance and hardness were reported [14]. The two exothermic peaks were measured during heating of Ni-Ti-Al pressed compact containing 10–40 at % of aluminum. The first peak was observed at the temperature range of 595–625 °C, being related to the reaction between nickel and aluminum at eutectic point at the temperature of 640 °C. The second exothermic peak accompanies the reaction between nickel and titanium in the temperature range 938–946 °C at approximately eutectic point. Increasing amount of aluminum leads to higher exothermicity of the first peak and to lower exothermicity of the second peak [15].
In the present study, the addition of a low amount of aluminum (1–7 wt %) into the near equiatomic Ni-Ti powder mixture is studied. The mechanism of the reactions was studied in dependence of the heating rate.

The metallic powders with the following particle sizes and purities were used as reagents: nickel (<150 µm; 99.99 wt %), titanium (<44 µm; 99.5 wt %) and aluminum (<44 µm; 99.7 wt %). The powder mixtures were blended in desired proportions (shown in Table 2) and uniaxially compressed at room temperature to cylindrical green bodies of 12 mm in diameter at a pressure of 450 MPa for five minutes using LabTest 5.250SP1-VM universal loading machine (Labortech, Opava, Czech republic). The differential thermal analysis (DTA) of the Ni-Ti-Al compressed powder mixtures was carried out using the SETSYS Evolution–1750 device (Setaram, Caluire, France) by the heating rate ranging from 50 to 1200 °C with the heating rate of 30 °C·min−1 in argon atmosphere and alumina crucible. The weight of the tested samples was approximately 80 mg, which was mechanically separated from the compressed powder mixture. The substitution for the DTA with a maximal applicable heating rate of 30 °C·min−1 was searched for measuring and observing of influence of heating rate on the initial temperature of TE-SHS reaction. The device composed of induction furnace with the protective argon atmosphere and optical pyrometer OPTRIS P20 2M (Optris, Portsmouth, NH, USA) can record the heating curve with the initial temperature at a heating rate of approximately 110 °C·min−1.
The TE-SHS reaction of the compressed powder mixtures was performed in the fused silica ampoules evacuated to 10−2 Pa and sealed. The ampoules with the samples was inserted to the electric resistance furnace preheated to the temperature of 800 and 1100 °C for a process duration 20 min followed by cooling in air. The NiTiAl5 sample was annealed at 610 °C for 20 min to determine which phase is formed as the first. The metallographic samples were ground by sandpapers P180–P4000 (Hermes Schleifmittel GmbH, Hamburg, Germany) with SiC abrasive elements, polished by diamond pastes and etched in Kroll’s reagent (10 mL HF, 5 mL HNO3, and 85 mL H2O). The microstructure was observed by the scanning electron microscope TESCAN VEGA 3 LMU (Tescan, Brno, Czech republic) equipped with the OXFORD Instruments X-max 20 mm2 SDD EDS analyser (Oxford Instruments, High Wycombe, UK) for identification of the chemical composition of the individual phases. The phase composition of the alloys was identified on the samples’ ground surfaces of using X-ray diffraction (XRD) by the means of PANalytical X’Pert Pro diffractometer (PANalytical, Almeo, The Netherlands) with a copper anode. The Vickers hardness test with a load of 10 kg at laboratory temperature was performed in order to compare the quality of sintering at temperatures of 800 and 1100 °C.

This investigation describes the differences in the reactive sintering mechanism between the binary NiTi46 and the powder mixture with various additions of aluminum NiTiAl1–7 wt %. The changes in sintering duration were observed when the addition of aluminum into NiTi powder mixture was higher than 5 wt %. The diffusion-controlled reaction with the Ti2Ni phase as a product occurs below the α→β Ti transformation temperature (882 °C) and close to this temperature (860–890 °C) TE-SHS is initiated in NiTi46, NiTiAl1, and NiTiAl3 wt % powder mixtures. The aluminum content 5–7 wt % in powder mixture activates the TE-SHS at approximately 630–640 °C by heating rate 110 °C·min−1 and higher. The microstructures of the samples sintered at the temperatures of 800 and 1100 °C are very similar in the case of NiTiAl7 alloys. 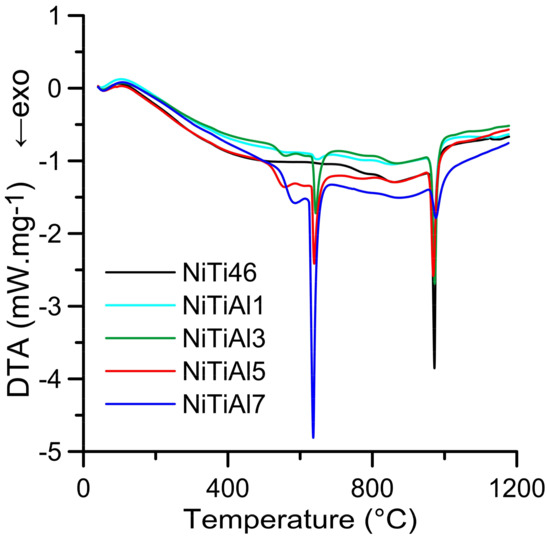 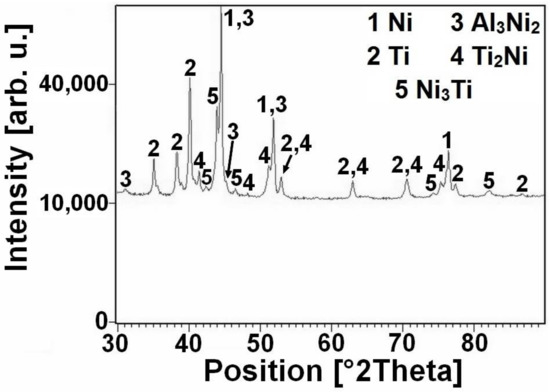 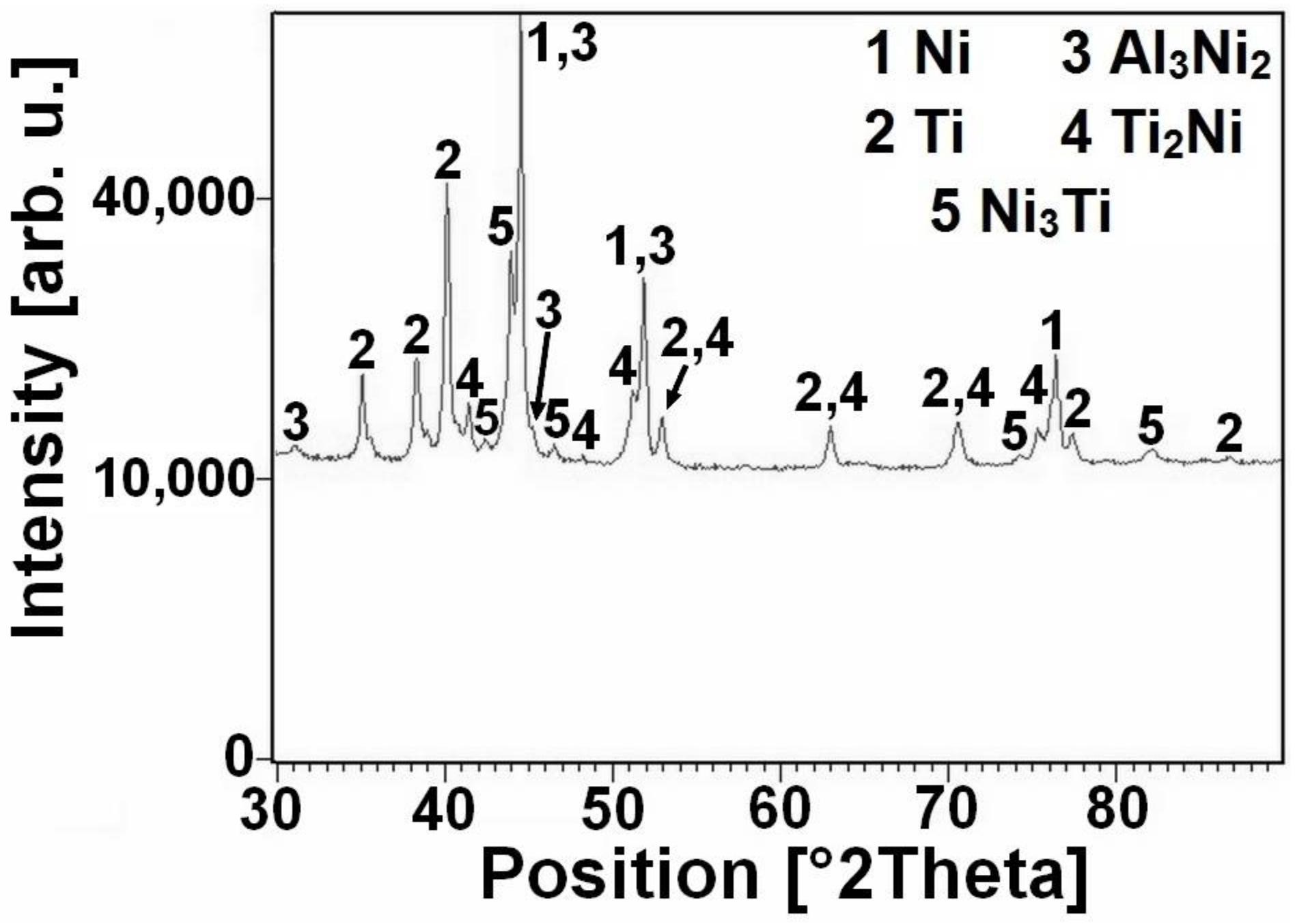 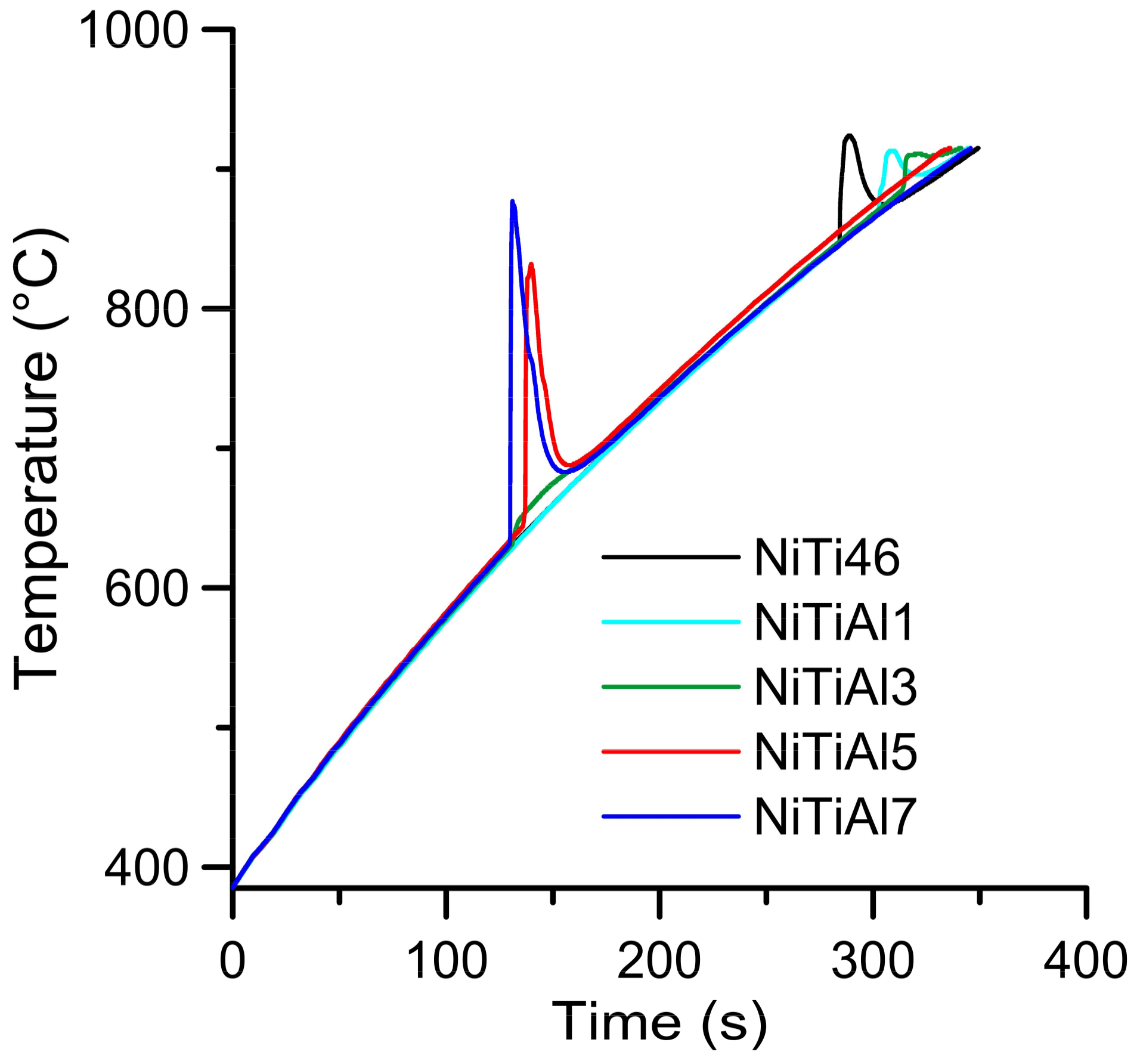 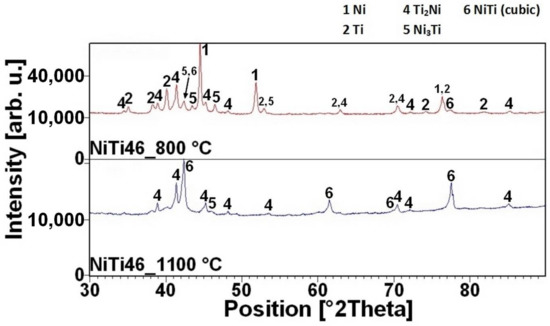 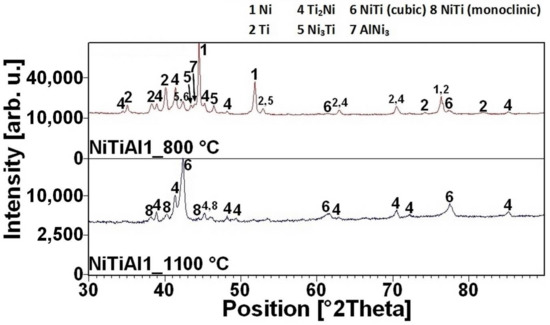 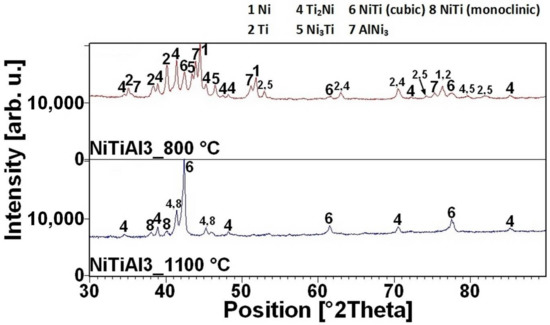 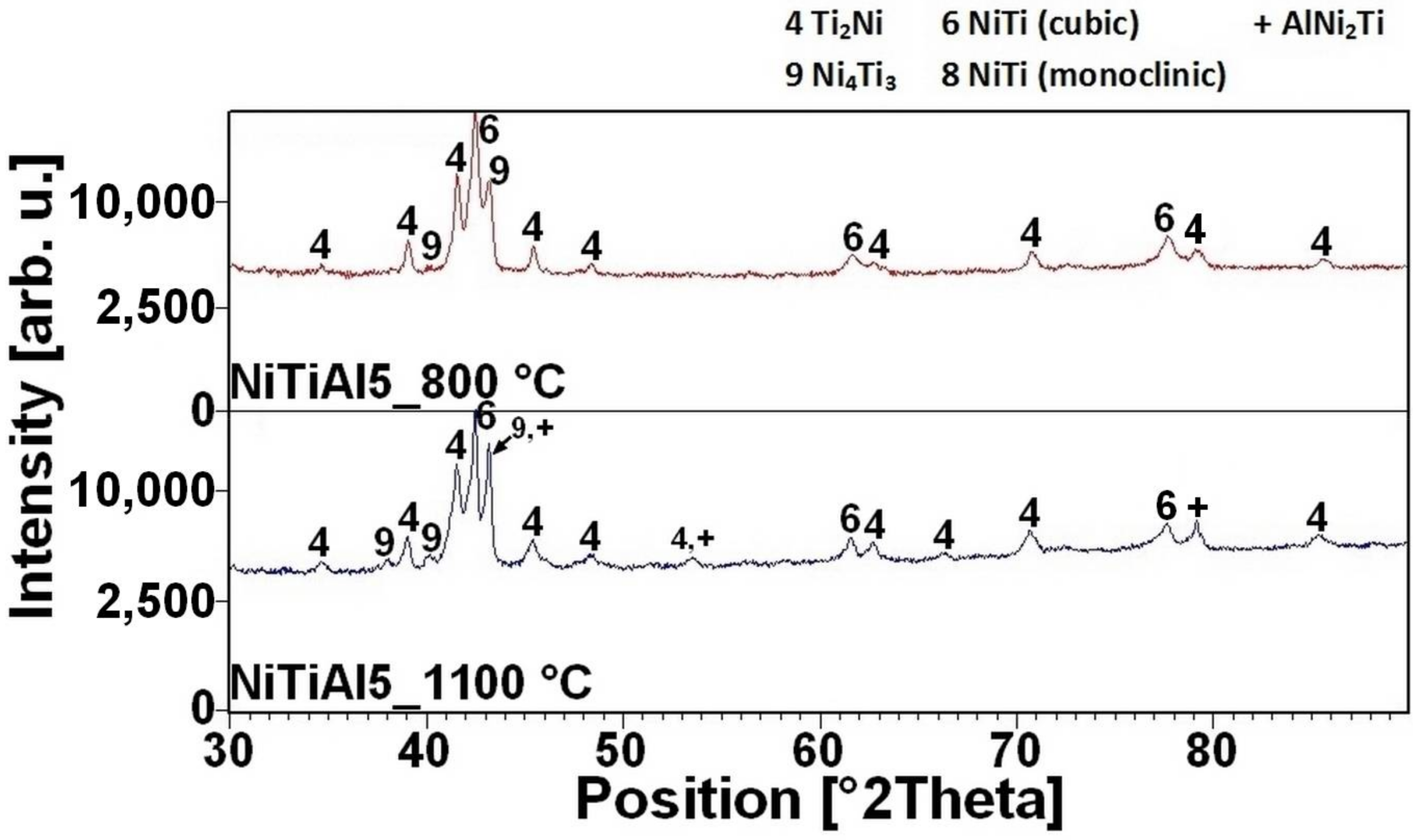 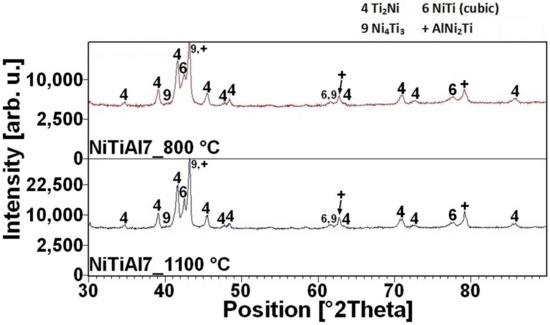 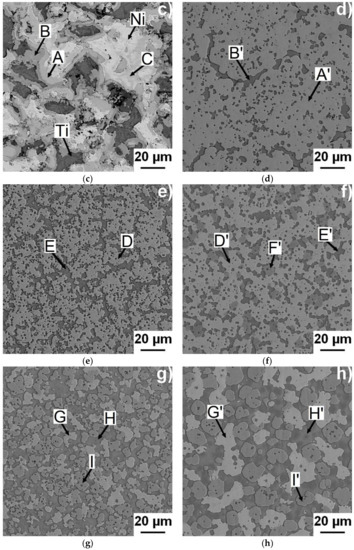 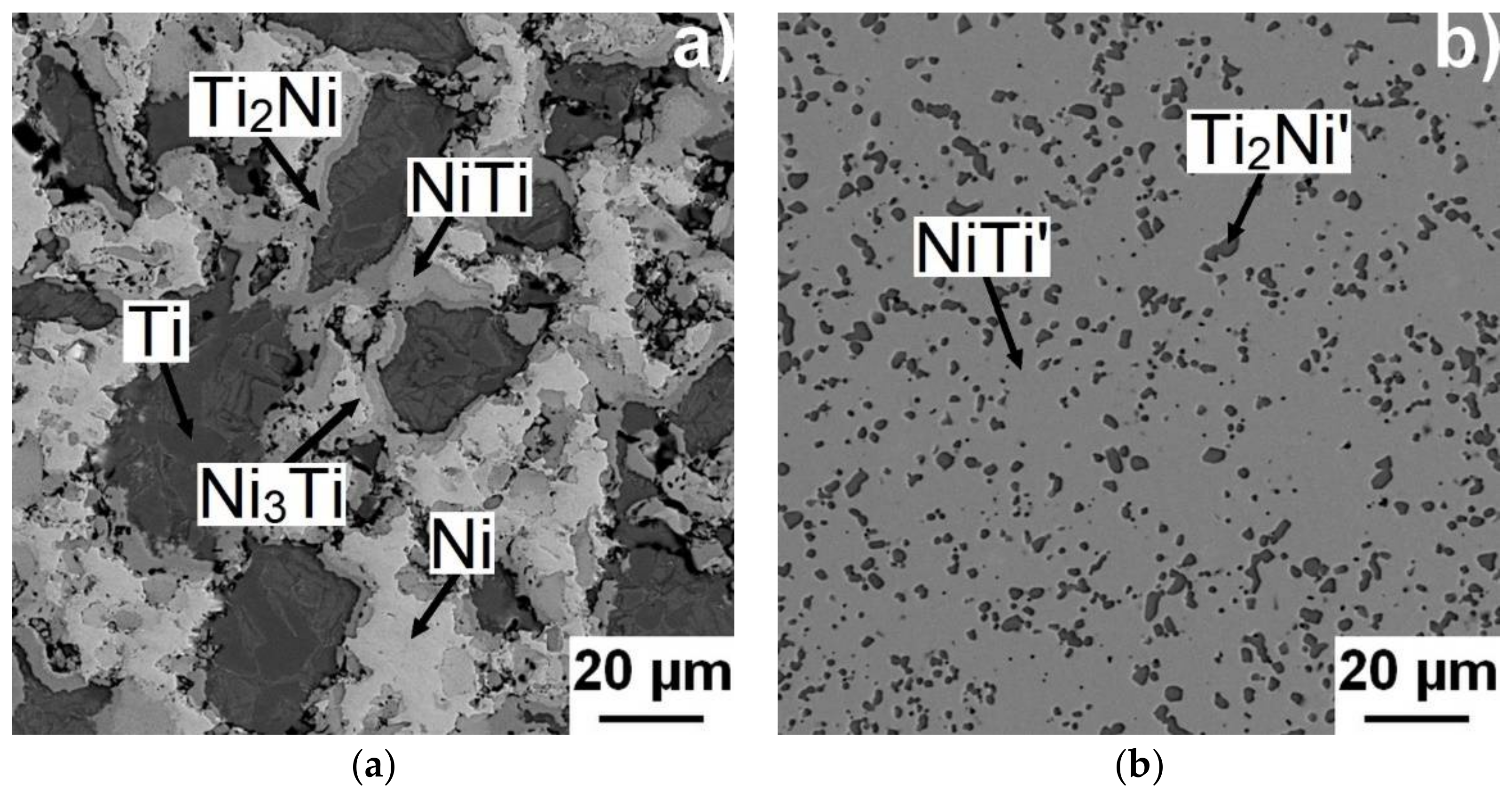 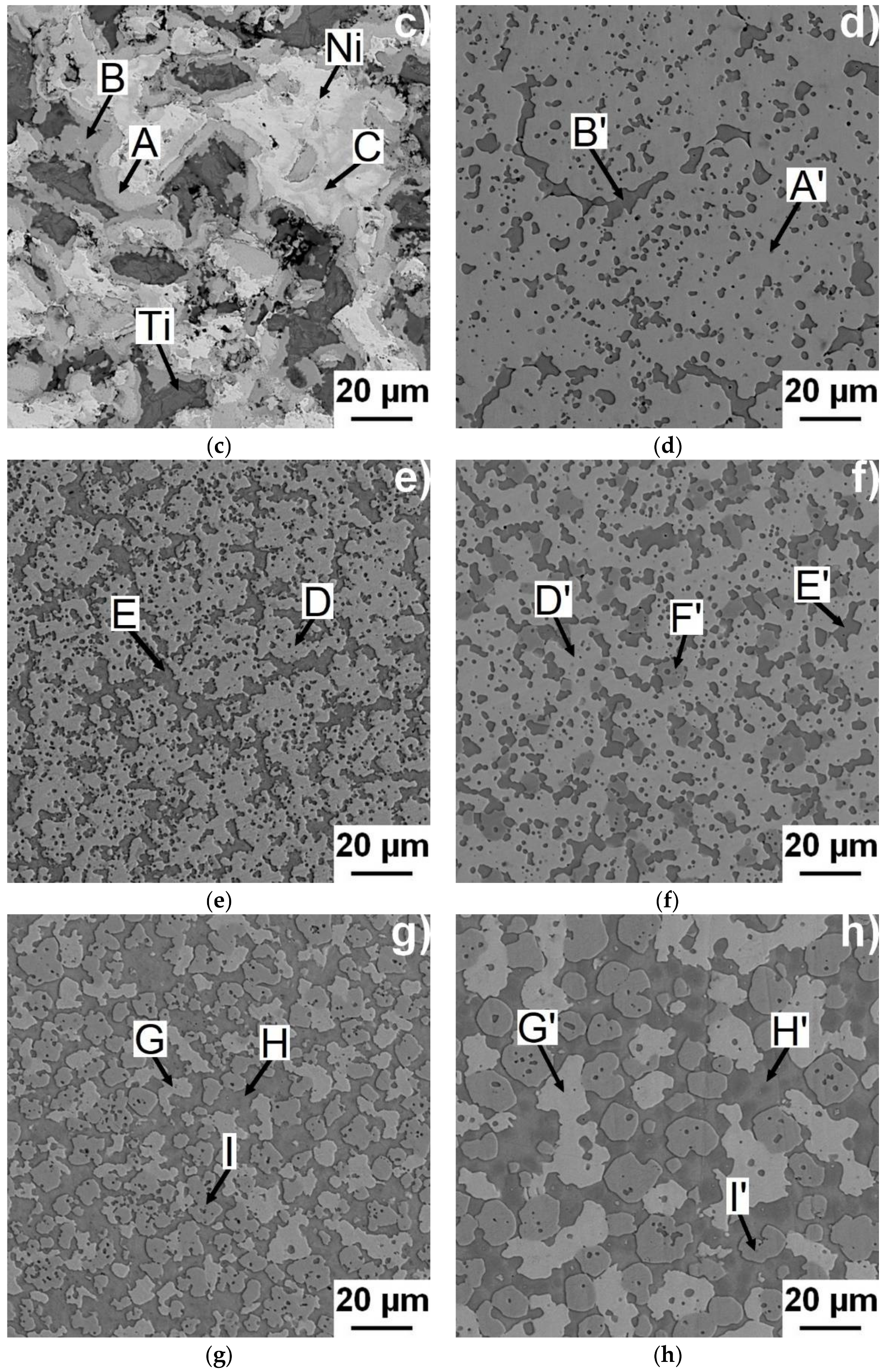 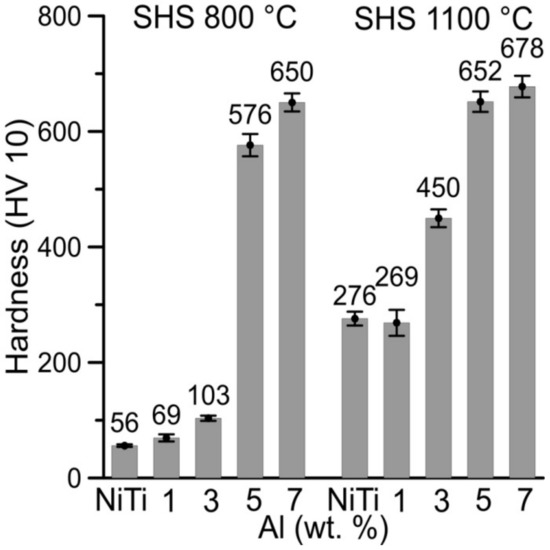 Table 2. Chemical compositions of the prepared powder mixtures.
Table 2. Chemical compositions of the prepared powder mixtures.
© 2018 by the authors. Licensee MDPI, Basel, Switzerland. This article is an open access article distributed under the terms and conditions of the Creative Commons Attribution (CC BY) license (http://creativecommons.org/licenses/by/4.0/).
We use cookies on our website to ensure you get the best experience. Read more about our cookies here.
Accept
We have just recently launched a new version of our website. Help us to further improve by taking part in this short 5 minute survey here. here.
Never show this again