Titania (TiO2) is considered to have immense potential as a photocatalyst, the anatase phase in particular. There have been numerous attempts to push the limits of its catalytic activity to higher wavelengths to harness the visible electromagnetic radiation. Most of the investigations till date have been restricted to fine-tuning the bandgap by doping, control of defect chemistry at the surface and several to first principle simulations either with limited success or success at the cost of complexities in processing. Here, we report a simple and elegant way of preparing ceramics through precursor chemistry which involves synthesis of macroporous and mesoporous nanocomposites with in situ formation of TiO2 nanocrystals into a robust and protecting SiOC matrix. The in situ nanoscaled TiO2 is anatase of size 9–10 nm, which is uniformly distributed in an amorphous SiOC matrix forming a new generation of nanocomposites that combine the robustness, structural stability and durability of the SiOC matrix while achieving nanoscaled TiO2 functionalities. The stabilization of the anatase phase even at temperature as high as 1200 °C was evident. With an average pore size of 6.8 nm, surface area of 129 m2/g (BET) and pore volume of 0.22 cm3/g (BET), mesoporosity was achieved in the nanocomposites. The composites exhibited visible light photocatalytic activity, which is attributed to the Ti–O–C/TiC bonds resulting in the reduction of band gap by 0.2 to 0.9 eV. Furthermore, the heterojunction formed between the amorphous SiOC and crystalline TiO2 is also expected to minimize the recombination rate of electron-hole pair, making these novel nanocomposites based on TiO2 extremely active in visible wavelength regime. View Full-Text
Keywords: silicon oxycarbide; precursor derived ceramics; photocatalysis; adsorption silicon oxycarbide; precursor derived ceramics; photocatalysis; adsorption
►▼ Show Figures 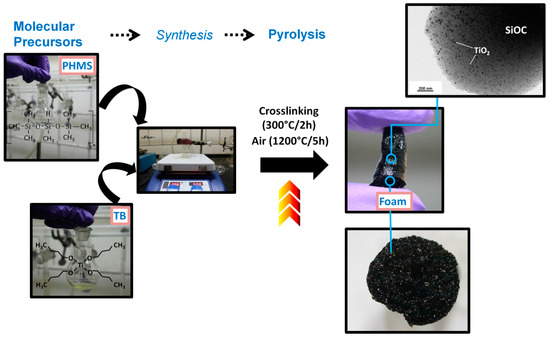