Upper Critical Solution Temperature (UCST)-type thermally responsive polypeptides (TRPs) with phase transition temperatures around 37 °C in phosphate-buffered saline (PBS) buffer (pH 7.4, 100 mM) were prepared from poly(l-ornithine) hydrobromide and coated on non-tissue culture-treated plastic plates (nTCP). Cell adhesion was observed at temperatures above the phase transition temperature of the coating polymer (39 °C), while cell release was triggered when the culture temperature was switched to 37 °C. Approximately 65% of the attached cells were released from the surface within 6 h after changing the temperature, and more than 96% of the released cells were viable. Water contact angle measurements performed at 39 and 37 °C demonstrated that the surface hydrophobicity of the new TRP coatings changed in response to applied temperature. The cell attachment varied with the presence of serum in the media, suggesting that the TRP coatings mediated cell attachment and release as the underlying polymer surface changed conformation and consequently the display of adsorbed protein. These new TRP coatings provide an additional means to mediate cell attachment for application in cell-based tissue regeneration and therapies. View Full-Text
Keywords: UCST polymer; thermo-responsive polypeptides; controlled cell attachment UCST polymer; thermo-responsive polypeptides; controlled cell attachment
►▼ Show Figures 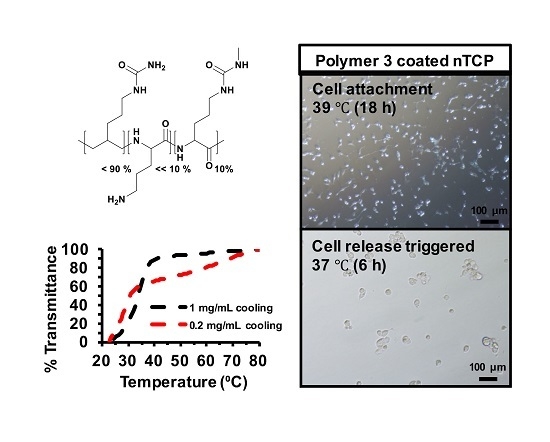