This work demonstrates that a version of the Reduction Expansion Synthesis (RES) process, Cr-RES, can create a micron scale Cr coating on an iron wire. The process involves three steps. I. A paste consisting of a physical mix of urea, chrome nitrate or chrome oxide, and water is prepared. II. An iron wire is coated by dipping. III. The coated, and dried, wire is heated to ~800 °C for 10 min in a tube furnace under a slow flow of nitrogen gas. The processed wires were then polished and characterized, primarily with scanning electron microscopy (SEM). SEM indicates the chrome layer is uneven, but only on the scale of a fraction of a micron. The evidence of porosity is ambiguous. Elemental mapping using SEM electron microprobe that confirmed the process led to the formation of a chrome metal layer, with no evidence of alloy formation. Additionally, it was found that thickness of the final Cr layer correlated with the thickness of the precursor layer that was applied prior to the heating step. Potentially, this technique could replace electrolytic processing, a process that generates carcinogenic hexavalent chrome, but further study and development is needed. View Full-Text
Keywords: metal coating; reduction expansion synthesis; chrome metal coating; reduction expansion synthesis; chrome
►▼ Show Figures 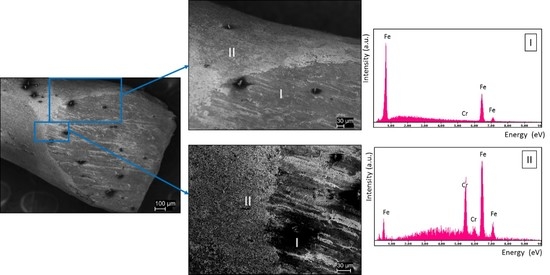