Two heat treatments were carried out below (Ti6Al4V800) and above (Ti6Al4V1050) Ti6Al4V beta-phase transformation temperature (980 °C), with the purpose of studying the effect of microstructure on the adhesion and proliferation of fibroblast cells, as well as their electrochemical behavior. These alloys were seeded with 10,000 L929 fibroblast cells and immersed for 7 days in the cell culture at 37 °C, pH 7.40, 5% CO2 and 100% relative humidity. Cell adhesion was characterized by Scanning Electron Microscopy (SEM) and Electrochemical Impedance Spectroscopy (EIS) techniques. Polygonal and elongated cell morphology was observed independent of Ti6Al4V microstructure. Besides, C, O, P, S, Na and Cl signals were detected by Energy Dispersive X-Ray Spectroscopy (EDX), associated with the synthesis of organic compounds excreted by the cells, including protein adsorption from the medium. In certain areas on Ti6Al4V and Ti6Al4V800 alloys, cells were agglomerated (island type), likely related to the globular microstructure; meanwhile, larger cellular coverage is shown for Ti6Al4V1050 alloy, forming more than one layer on the surface, where only Ca was recorded. Impedance diagrams showed a similar passive behavior for the different Ti6Al4V alloys, mainly due to TiO2 overlaying the contribution of the organic compounds excreted by fibroblast cells. View Full-Text
Keywords: Ti6Al4V; heat treatment; fibroblasts Ti6Al4V; heat treatment; fibroblasts
►▼ Show Figures 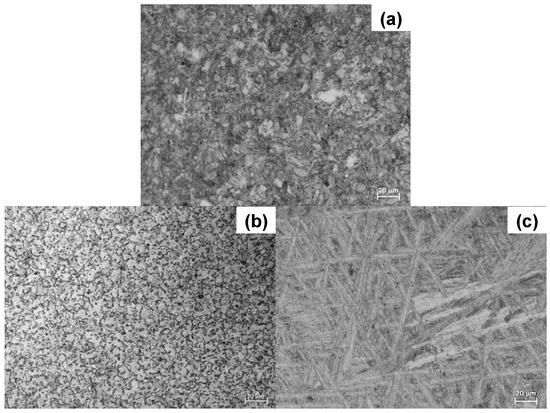