A schematic diagram of the experimental device is illustrated in Figure 1. The primary components of the apparatus are a stainless steel reactor, an air bath system, and a data collection system. 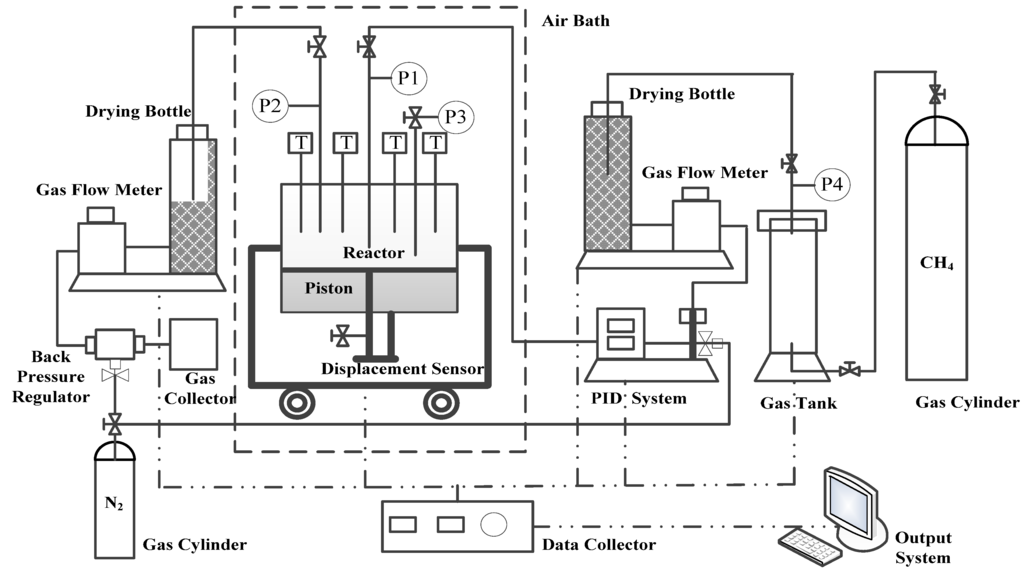 The reactor is 300 mm in internal diameter, 70 mm in inside height and has a volume of 5 L. It is made of stainless steel which can sustain pressures up to 20 MP. There is a movable piston in the reactor which is used to press the porous media and change the volume of the reactor. The effective volume of reactor could be obtained by using the displacement sensor which is attached on the piston. A gas flow meter is used to obtain the amount of gas injected. The PID system could control the gas steadily injected into the reactor under the same pressure difference which is useful to make the gas flow meter more accurate. N2 pressure is used to provide the power for the PID system and back pressure regulator. Uniform quartz glass beads (AS-ONE, Co., Ltd., Osaka, Japan) BZ-04 (0.350–0.500 mm, average 0.4 mm) were used to simulate the porous media. The porosity of the porous media is 36.1%. The reactor is enclosed in an air bath which can maintain at a constant temperature ranging from 253 to 323 K with a precision of ± 0.1 K. The upper and bottom ends of the reactor were capped with thermal insulation foam and the heat mainly flows into the reactor through the walls of the cylinder. The temperature and pressure profiles are measured by 16 Pt. 1000 thermal resistance thermometers and three pressure sensors which have a precision of ± 0.1 K and ± 0.1 MP, repectively, placed on top of the reactor in different positions. The details of the position of the thermal resistance thermometers and pressure sensors are shown in Figure 2. All the data was detected and recorded every 30 s.

First, the reactor was cleaned with deionized water. Then dry BZ-04 quartz sand was tightly packed in the reactor and saturated with deionized water and the amounts of both were recorded. Then the reactor was closed and the piston used to press the porous media until the axial pressure comes to 10 MP. After that, the axial pressure was decreased to zero and the reactor was evacuated for 10 min to remove air using a vacuum pump. Then the methane was dried and charged into the reactor steadily until the pressure rose to the given pressure of 8.4 MP at 20.5 °C and the flow meter and PID system are used to measure and record the amount of methane gas during this process. Finally, the air bath system was turned on and the temperature kept at 1 °C which is higher than the ice point to avoid the formation of ice in order to remove the buffer effect which is observed by Pang et al. [14,15]. The main materials used in the experiment are listed at Table 1. When the pressure drop in the system is less than 0.1 MP over 3 h, the hydrate formation process is assumed to be complete. 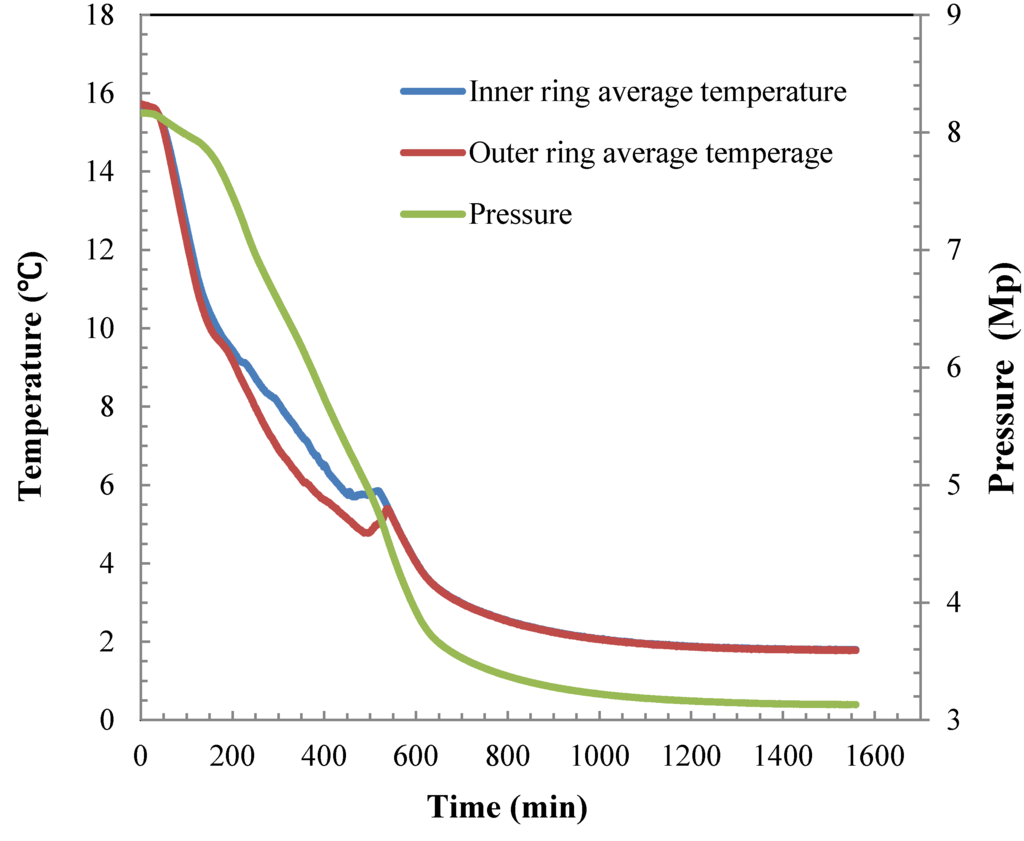 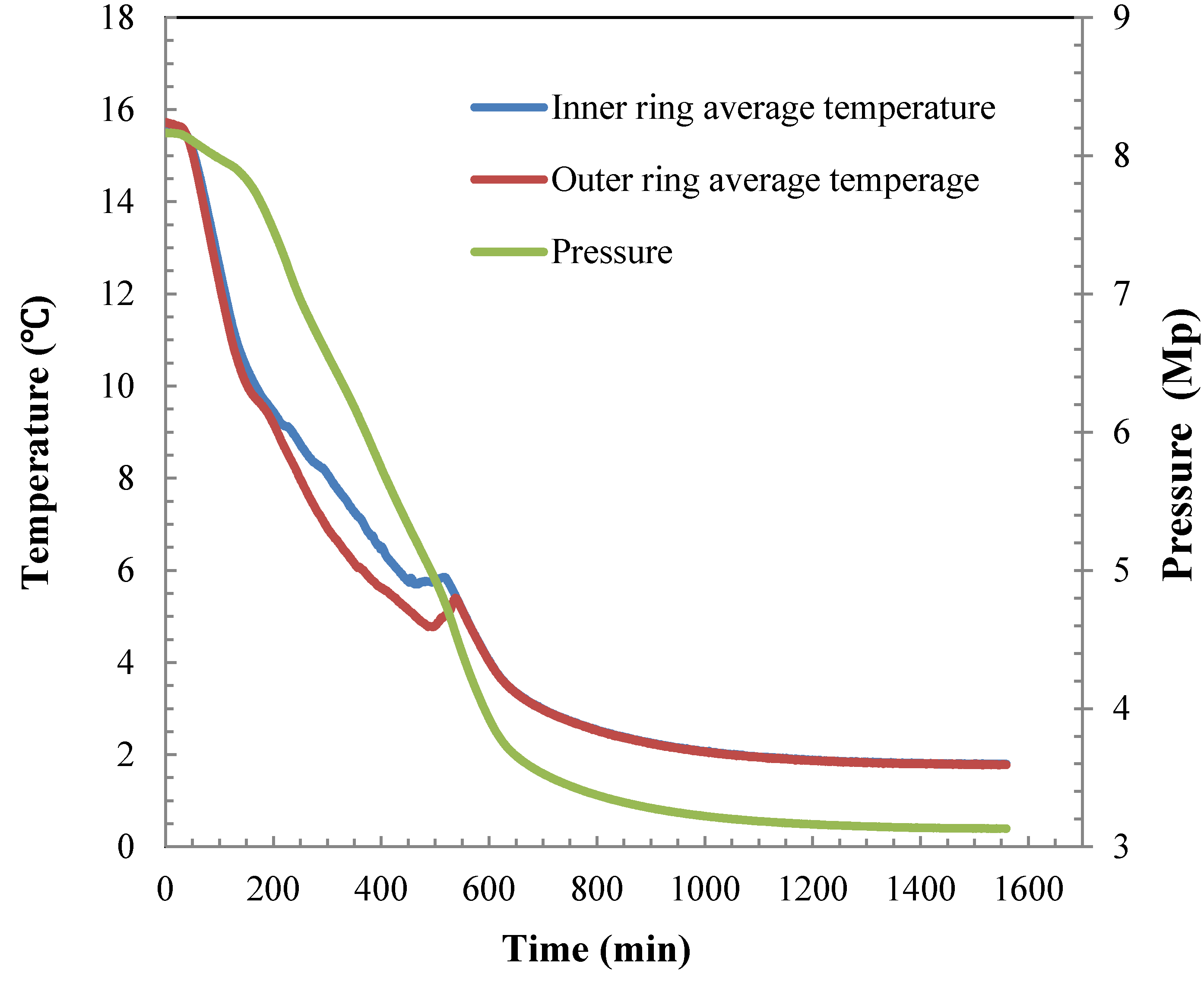 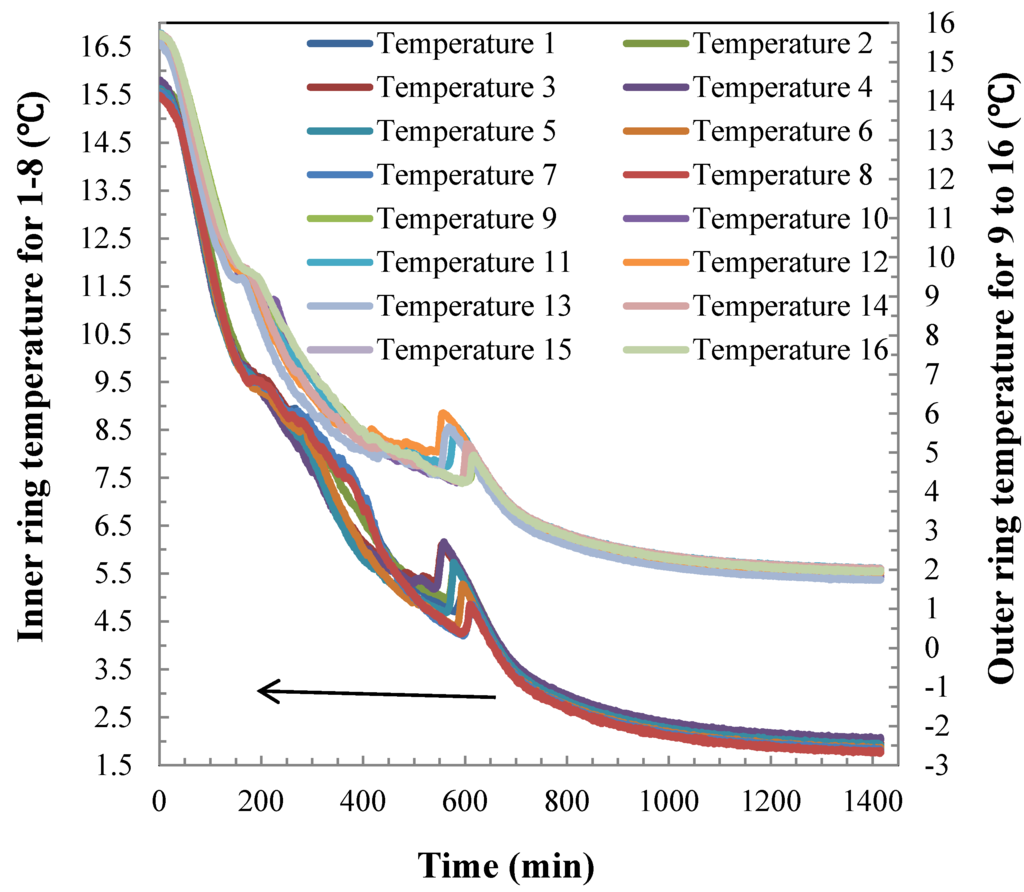 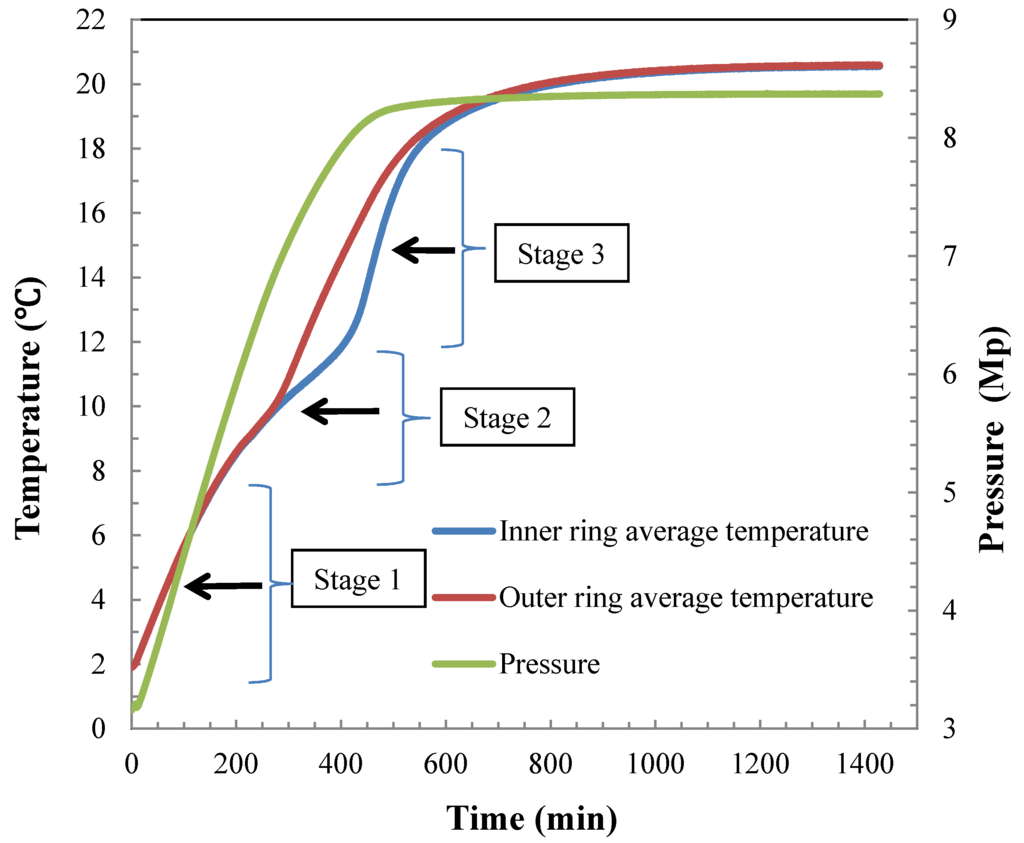 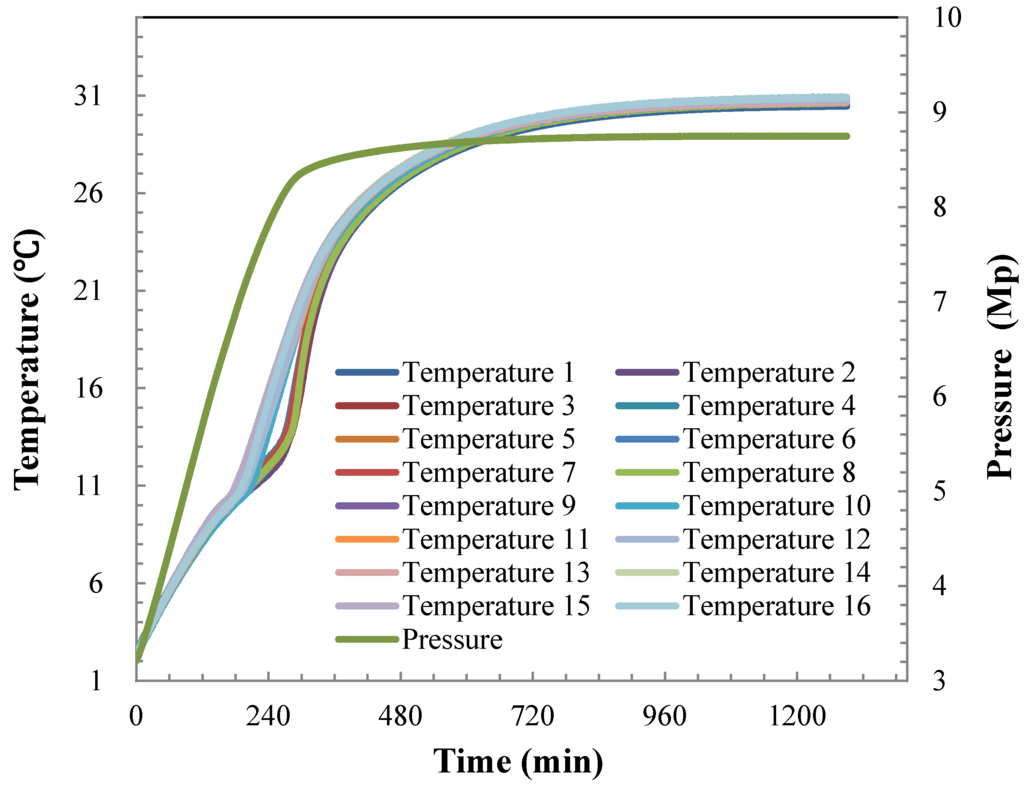 In the Messoyakha field production stage (IV), the well was closed and came to the preservation phase. As the temperature and pressure are above the equilibrium conditions, therefore the hydrate continues to dissociate and pressure increases [25,26,27]. This study stimulates the hydrate dissociation in the preservation stage. The environmental temperature was set as 10 °C, which is similar to the Messoyakha field. As shown in Figure 7, there is no significant temperature difference between the inner and outer parts of the reaction, which indicates that the hydrate dissociates uniformly in different positions of the reactor. As the pressure and temperature are near the equilibrium conditions, the hydrate dissociates slowly than the other groups, about three times as much as that at other temperatures. Since the hydrate decomposes slowly, the heat needed can be compensated by the heat flow from the air bath which results in the uniform dissociation of hydrate. In addition, the thermal properties of hydrate sediments change slowly, which has little impact on the heat flow of the reactor. This is meaningful in controlling the safety of the geology in hydrate exploitation.

At the dissociation stage, the temperature of the air bath comes to the set values in a few minutes. The heat flows into reactor through the stainless steel wall. As the thermal conductivity of stainless steel wall is 16 W/mK, which is much larger than that of the hydrate sediment, the temperature of the inner and outer ring walls of the reactor is assumed to be same. Before the temperature of the wall increases to the phase equilibrium condition, the hydrate has not dissociated and there is no phase change in the reactor. The heat conduction is the controlling heat transport process while this happens. The accordant and homogenous temperatures in different positions of the reactor also proved that. With the temperature of the wall rising, the hydrate near the wall begins to decompose. The dissociation of solid hydrate in porous media to liquid water and gas is a phase change process which involves three phases. This process in the presence of sand is an unsteady process. This unsteady state is expected since as the hydrate dissociates, the sand present in the unconsolidated hydrate sediments starts building a layer in front of the un-dissociated hydrate zone. 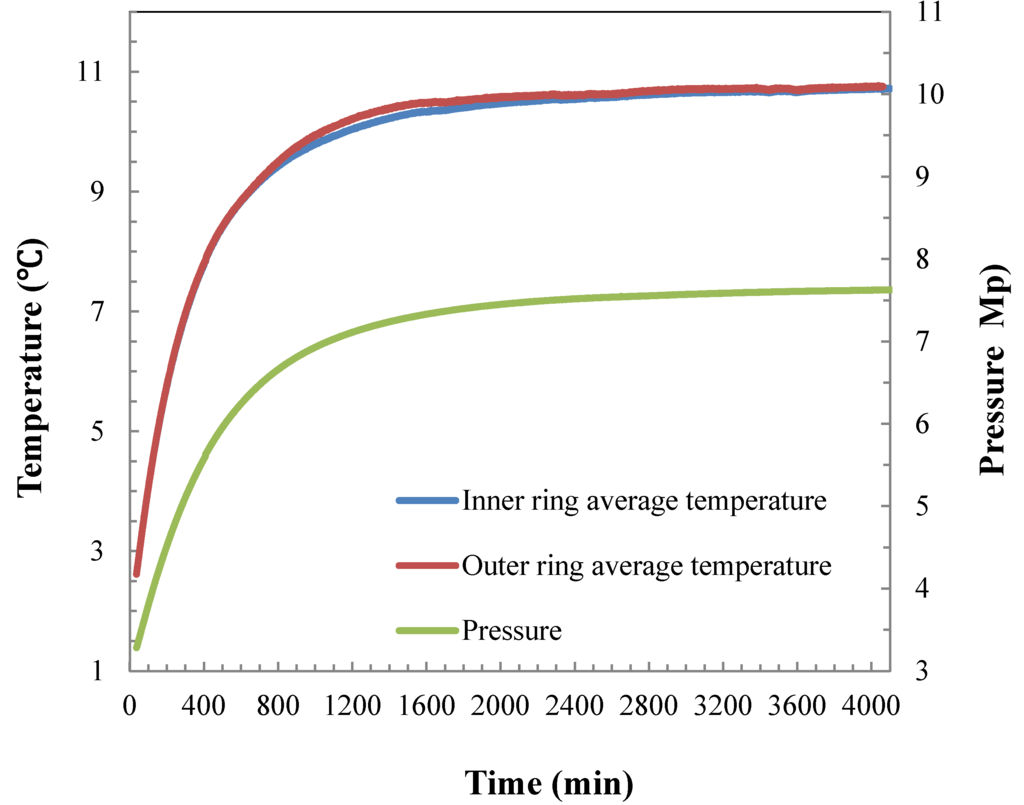 4.4. Temperature Difference during the Hydrate Dissociation

In this study, the hydrate dissociates in a closed reactor by thermal method. If the hydrate in local place decomposes too quickly that the heat from the air bath could not compensate, there will be a temperature difference in the radial direction. That means there are large amount hydrate dissociation and the change of thermal properties of hydrate. The temperature difference in the hydrate sediment is the main driving force for the dissociation. Figure 8 and Figure 9 show the ΔToi with different production environment temperatures. 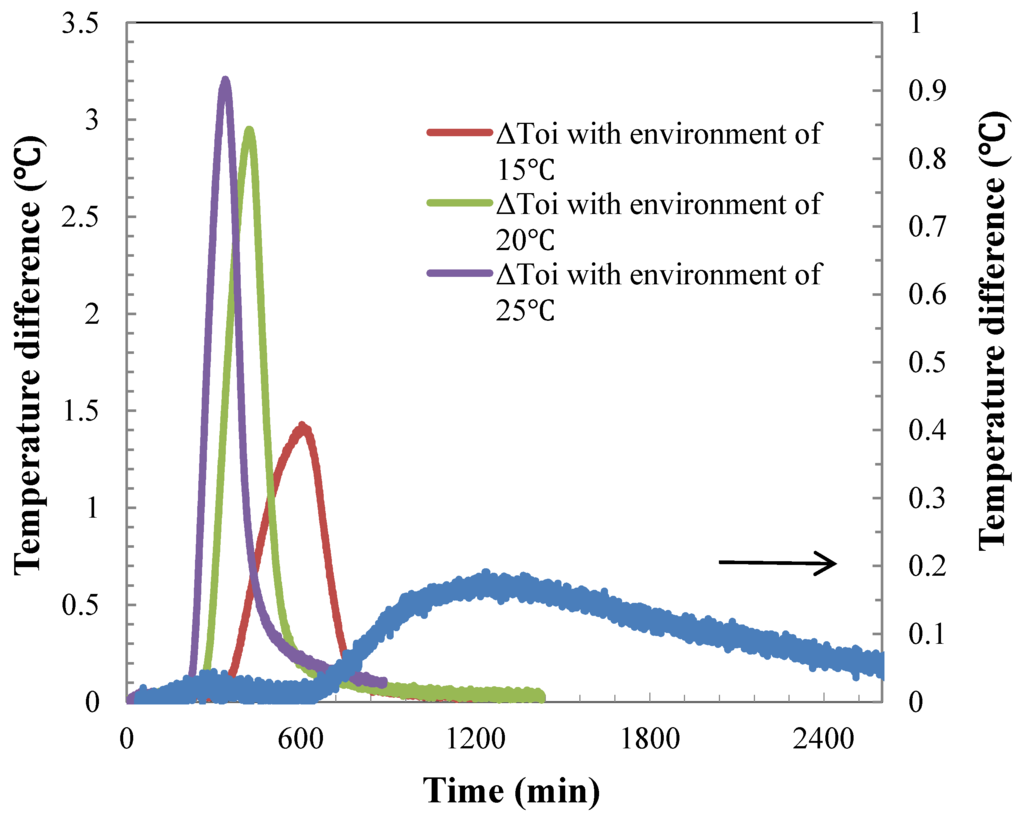 In this paper, experiments were conducted to examine the heat transfer performance during hydrate formation and dissociation using a 5 L volume reactor. The hydrate was dissociated in a closed reactor by the thermal method. From the experimental results, the following conclusions can be drawn:
(1) An apparent temperature difference is obtained between the two radial positions in the reactor when the hydrate begins to form, which is led by the exothermic process and the change of the thermal properties of hydrates. There are two stages for the formation of large amounts of hydrate. The hydrate at the surface of the reactor forms at first, with the decreasing of temperature and gas penetrating into the porous media, the hydrate then begins to form in the middle of the reactor.
(2) There are three stages in the hydrate dissociates process in a closed reactor by the thermal method, which is caused by the rate of dissociation and heat flow. The delay of hydrate dissociation between the inner ring and outer ring positions indicated the existence of a dissociation interface and moving boundary. An apparent temperature difference appears in the hydrate sediment during the dissociation process. However, the hydrate dissociates homogeneously and the temperature difference is much lower than under other condition when the production environment temperature is around 10 °C. Under this experimental conditions, the temperature of the convection of water in porous media is ignored. The heat is mainly conducted into the dissociated zone and into the dissociating zone.
(3) With the increasing temperature of the air bath, the maximum of ΔToi grows except when the temperature comes to 40 °C. The period of ΔToi are in accordance with the total time of hydrate dissociation. The period of ΔToi with environment of 10 °C is about twice as long than in the other groups.