:
Low-carbon energy transitions taking place worldwide are primarily driven by the integration of renewable energy sources such as wind and solar power. These variable renewable energy (VRE) sources require energy storage options to match energy demand reliably at different time scales. This article suggests using a gravitational-based energy storage method by making use of decommissioned underground mines as storage reservoirs, using a vertical shaft and electric motor/generators for lifting and dumping large volumes of sand. The proposed technology, called Underground Gravity Energy Storage (UGES), can discharge electricity by lowering large volumes of sand into an underground mine through the mine shaft. When there is excess electrical energy in the grid, UGES can store electricity by elevating sand from the mine and depositing it in upper storage sites on top of the mine. Unlike battery energy storage, the energy storage medium of UGES is sand, which means the self-discharge rate of the system is zero, enabling ultra-long energy storage times. Furthermore, the use of sand as storage media alleviates any risk for contaminating underground water resources as opposed to an underground pumped hydro storage alternative. UGES offers weekly to pluriannual energy storage cycles with energy storage investment costs of about 1 to 10 USD/kWh. The technology is estimated to have a global energy storage potential of 7 to 70 TWh and can support sustainable development, mainly by providing seasonal energy storage services.
Keywords:
climate change; energy systems analysis; energy transition; gravitational energy storage; smart grid management; electricity storage model

The amount of usable space will determine the suggested design’s storage medium in the upper storage site (surface) and the lower storage site (underground), which is proportional to the energy storage potential of the mine, the demand for the energy storage service, and the energy storage costs. For instance, a solution including a sand and water mixture can be appropriate due to its low cost. However, if the mine is small and the demand for energy storage is high, materials with a higher density may be used if the additional cost of the material permits. The densities and prices of various storage mediums have been compared [54,55,56,57,58].
The paper investigates UGES projects with 4,000,000 and 40,000,000 tons of sand. Assuming a sand density of 1600 kg/m3 and that the cone-shaped sand pile has an average height of 50 m, the area required is 0.15 and 1.5 km2. Table 1 compares various operational setups for UGES (the usual weight limit applied in conventional lifts is shown in Table 1). Concerning the mine storage capacity, the number of storage containers varies greatly. Assuming that the lifts in the mine have an average power generation capacity of 10 MW, the storage cycle in days is projected to be (87.2/24/10 * 1000 = 363.3). The plant’s capacity factor is poor because it spends half of the time storing energy and half of the time producing electricity.
Additionally, to generate electricity, the lift must travel up and down. The electricity generation capacity factor is 35% if the system is used at a 70% capacity factor. The energy storage capacity of a mine with 4,000,000 tons of sand and a 200 m average height difference is 1.74 GWh (4,000,000 × 1000 × 200 × 0.8 × 9.81/1000/1000/1000/60/60 = 1.74 GWh), which is slightly smaller than a usual daily pumped storage plant [59]. Higher average height differences in the UGES plant result in longer storage cycles and greater energy storage capacity. As shown in Table 1, various operational configurations could lead to energy storage cycles of a week, a month, or a year. Since batteries can more reliably, affordably, and efficiently supply short-term energy storage, the UGES design and operation should concentrate on long-term storage cycles (weekly, monthly, or yearly). However, the UGES could also supplement short-term energy storage on emergent occasions.
The power capacity of UGES plants depends on the amount of sand that can be lowered each time. This varies with the shaft depth, dimensions, speed, and density. The density is assumed to be 1600 kg/m3. Table 2 presents the power capacity of UGES projects. As can be seen, a project with a 200-meter depth with container dimensions of 1 m × 1 m and a speed of 0.25 m/s has a power capacity of 0.35 MW of electricity.
On the other hand, a project 1000 m deep with container dimensions of 4 × 4 at a speed of 1.0 m/s has a power capacity of 113 MW. This power capacity is similar to a small PHS plant. PHS plants have higher power capacities because of the larger tunnel diameters (10 m), larger velocities (4–6 m/s), and the whole tunnel being filled with water.
To display the operation of a UGES plant, we propose using a solar power plant with 1.35 GW and a UGES plant with 100 GWh storage capacity in the TauTona mine to meet 1% of the demand for electricity in South Africa [60]. The TauTona mine and solar power plant are located 50 km from Johannesburg, South Africa, with the coordinates of −26.4160 latitude and 27.4274 longitude, as presented in Figure 6a. Data from the Renewable Ninja website create the location’s solar generation profile [61]. The minimum power capacity required to supply the energy described in Figure 6a is 36 MW. The proposed UGES plant has an average depth of 1150 m and 40,000,000 tons of sand and operates with a speed of 0.25 m/s. Figure 6b illustrates how the UGES plant is intended to store energy in seasonal cycles. The short-term energy storage cycles are not described and are assumed to be performed with other energy storage alternatives, such as batteries and pumped storage. Besides providing seasonal storage generation, the UGES plant can also generate power during exceptionally hot days.
This study supposes that the mine shaft and the underground tunnels are already in place. However, there is still the need to buy the sand and the mining auxiliary equipment and install the cables, moto/generators, and foldable containers. This paper does not consider the additional charge of renting the mine and its top to store the containers and sand. The costs of UGES components are described in Table 3. A mine with 40,000,000 tons of sand and an average height difference of 1000 m is being utilized to demonstrate the system’s cost. A 1.6 USD/kWh price tag is projected for energy storage. The cost of storing energy with UGES decreases with an increase in the height difference between the lower and upper storage locations. Table 4 presents the UGES energy storage costs and power capacities at different depths. It should be noted that because natural underground mine caverns are irregular, there may be associated remediation costs which are not considered in this study due to the difficulty of assessment.

In light of the findings of this study, to produce a modest but constant amount of energy for a long time, UGES could be designed to store energy over weekly, monthly or seasonal scales, depending on the demand for energy storage. To offset the short-term changes in electricity consumption of solar and wind generation, this modest but consistent electricity generation might be supplemented with other storage technologies, such as batteries and PHS. The cost of installed energy storage for UGES is estimated in this study to vary from 1.0–10.0 USD/kWh, assuming an average height difference between the upper and lower storage sites of 1500 and 200 m, respectively. The project is less expensive the more significant the height difference. The power generation capacity varies with the mine’s depths, the mine shaft’s diameter, and the sand moving speed. This paper proposed constructing several motors/generators along the shaft to reduce the cables’ costs and allow using smaller, more common/affordable motors/generators. The system’s technical lifespan can range from 20 to 30 years. The technology’s storage potential ranges from 7 to 70 TWh globally, with most of this potential concentrated in China, India, the USA, and Russia. A precise description of the UGES system performance is outside this paper’s scope. We propose a more detailed analysis of the system’s performance and efficiency for future work. UGES is a particularly interesting technology for long-term energy storage to reduce seasonal fluctuations in electricity demand and wind and solar generation. 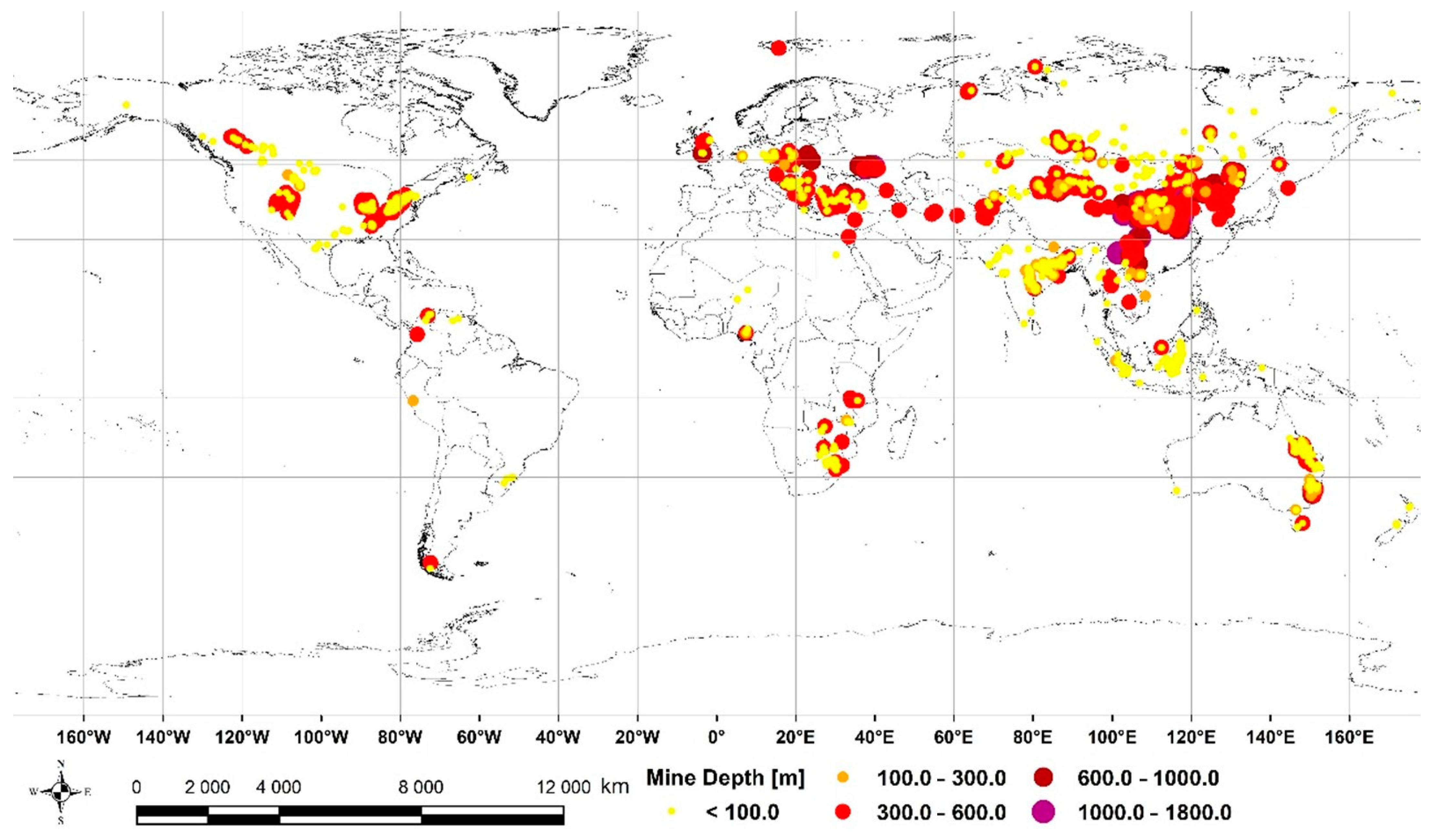 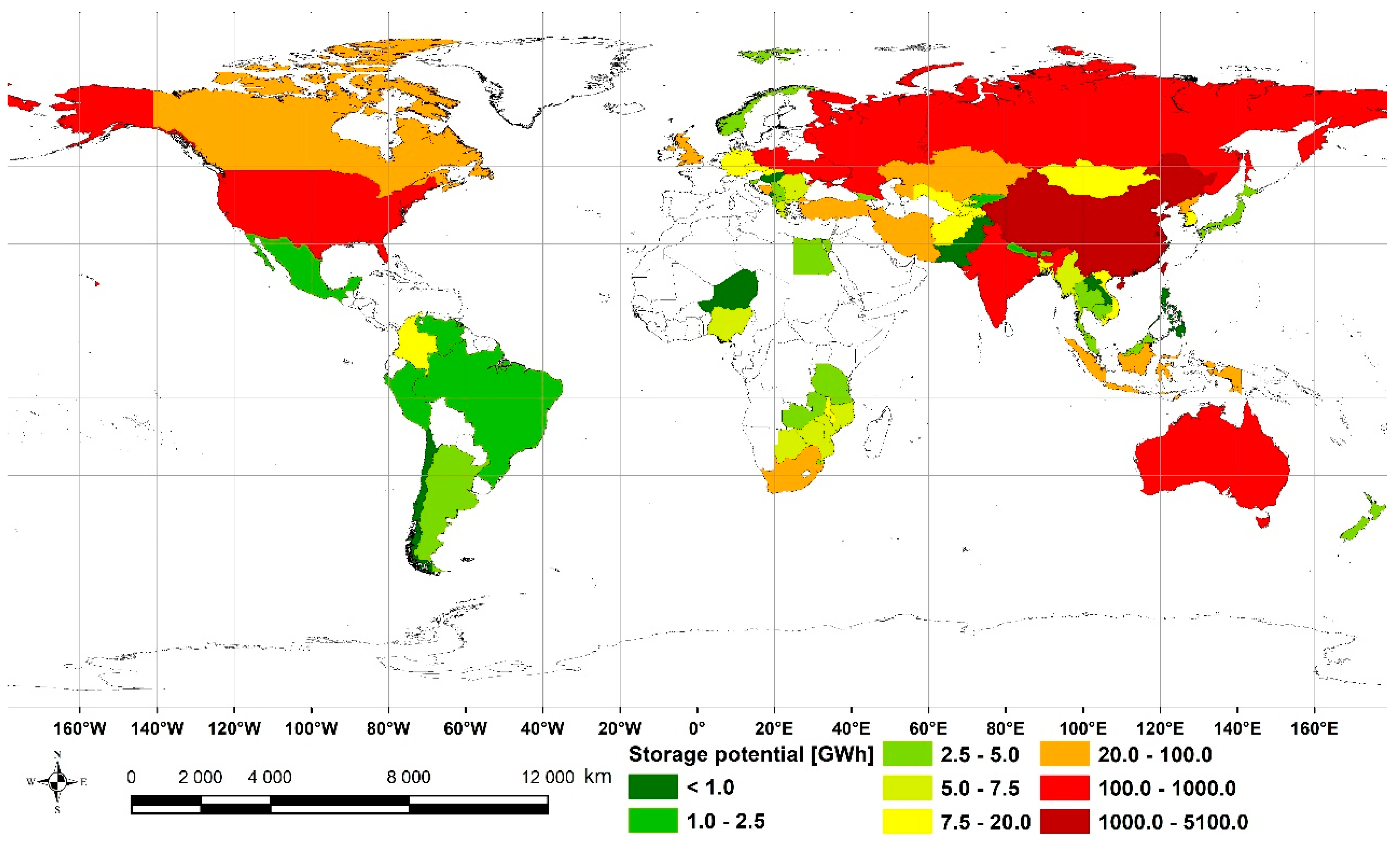 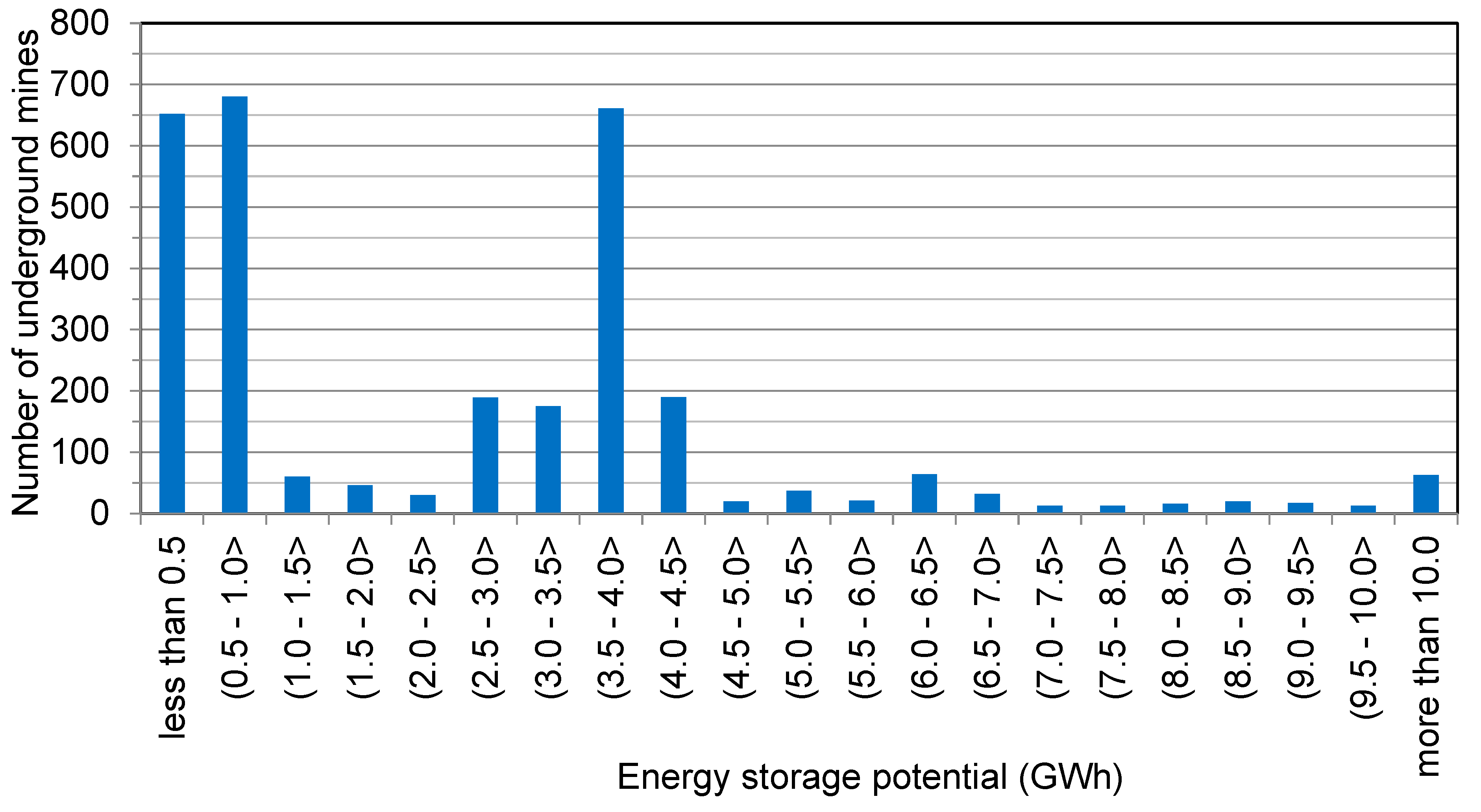 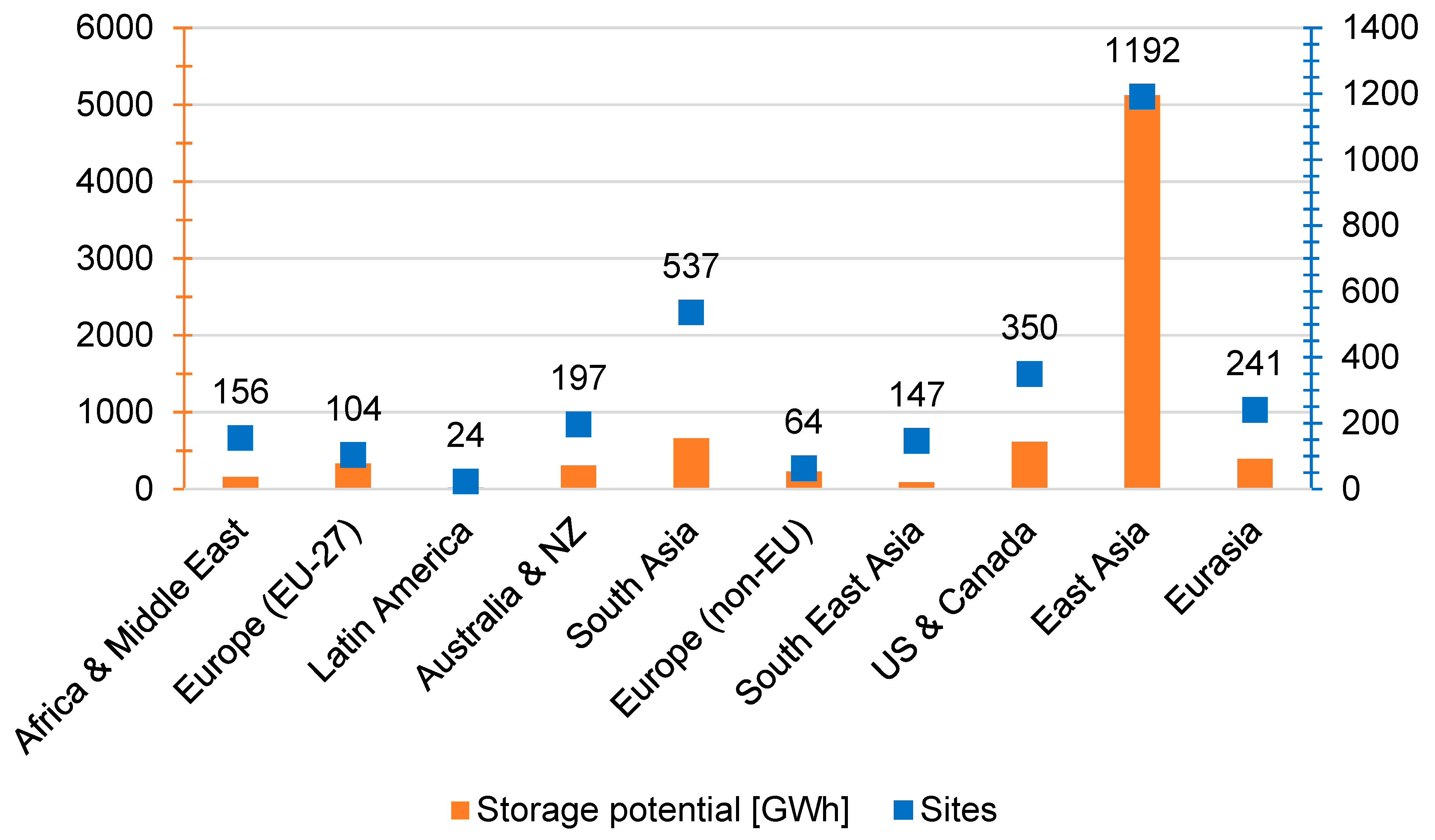