During the pulsed gravel packing process in horizontal wells, the sand-carrying fluid is transported to the horizontal section of the wellbore through the pipe string [35]. When the sand-carrying fluid enters the annulus of the casing and sand control string, the gravel is gradually transported and deposited in the annulus, while the fluid is returned to the sand control string through the screen tube. The function of the screen tube is to prevent gravel from entering the sand control string, so that the gravel is deposited in the annulus, and to prevent sand in the formation from entering the wellbore during the production process of the oil well. A physical model was established for the gravel packing process of horizontal wells, as shown in Figure 1.
By simplifying the physical model of the gravel packing process in horizontal wells, a finite element numerical model was established for the horizontal well section. The string diameter was 88.9 mm, the borehole diameter was 152.4 mm, and the model length was 20 m. The model is shown in Figure 2:
In order to ensure the convergence and stability of the calculation results, the following assumptions were made for the boundary conditions of the numerical model:
(1) Velocity inlet boundary was adopted and the user-defined function (UDF) was introduced to realize the change of pulse waveform. At the same time, the influences of annulus temperature and bottom hole gas and water seepage on the flow of sand-carrying fluid were ignored, and the sand-carrying fluid was regarded as the incompressible fluid [36].
(2) The outlet boundary adopted the pressure boundary, and the boundary pressure value was consistent with the environmental pressure.
(3) The string and wellbore were assumed to be smooth without slip boundary, and the gravel diameter and density were the same in any wellbore section.

In Fluent software, the sinusoidal pulse waveform was defined by embedding the UDF program to change the inlet boundary velocity. According to the theory of sinusoidal pulse wave, the frequency range of the selected pulse waveform is 2.5–10 Hz, the amplitude range is 1.5–2.0 m/s. Numerical simulation is carried out by combination of frequency and amplitude, where the simulation time is 60 s, the average amplitude is 1 m/s, the initial sand-carrying ratio is 10%, the gravel diameter is 1 mm, the sand-carrying fluid viscosity is 1.0 mPa·s, and the eccentricity of the string is 0. The evaluation criteria were fixed bed volume fraction and gravel migration velocity. Pulse waveforms with different amplitudes and frequencies are shown in Figure 3 and Figure 4, respectively.
In the pulsed gravel packing process of horizontal wells, three layers of hydraulic flow may occur in annular flow field, which are fixed bed, moving bed, and suspended bed as shown in Figure 5.

4. Analysis of Influencing Factors for the Pulsed Gravel Packing

4.1. Impact of Displacement on Pulsed Gravel Packing in Horizontal Wells

4.2. Impact of the Viscosity of the Carrying Fluid on Pulsed Gravel Packing in Horizontal Wells

Conceptualization, J.Y., S.C., and Q.O.; data curation, Y.Z.; supervision, X.Q. and Y.G.; writing–original draft, Z.Z. All authors have read and agreed to the published version of the manuscript. 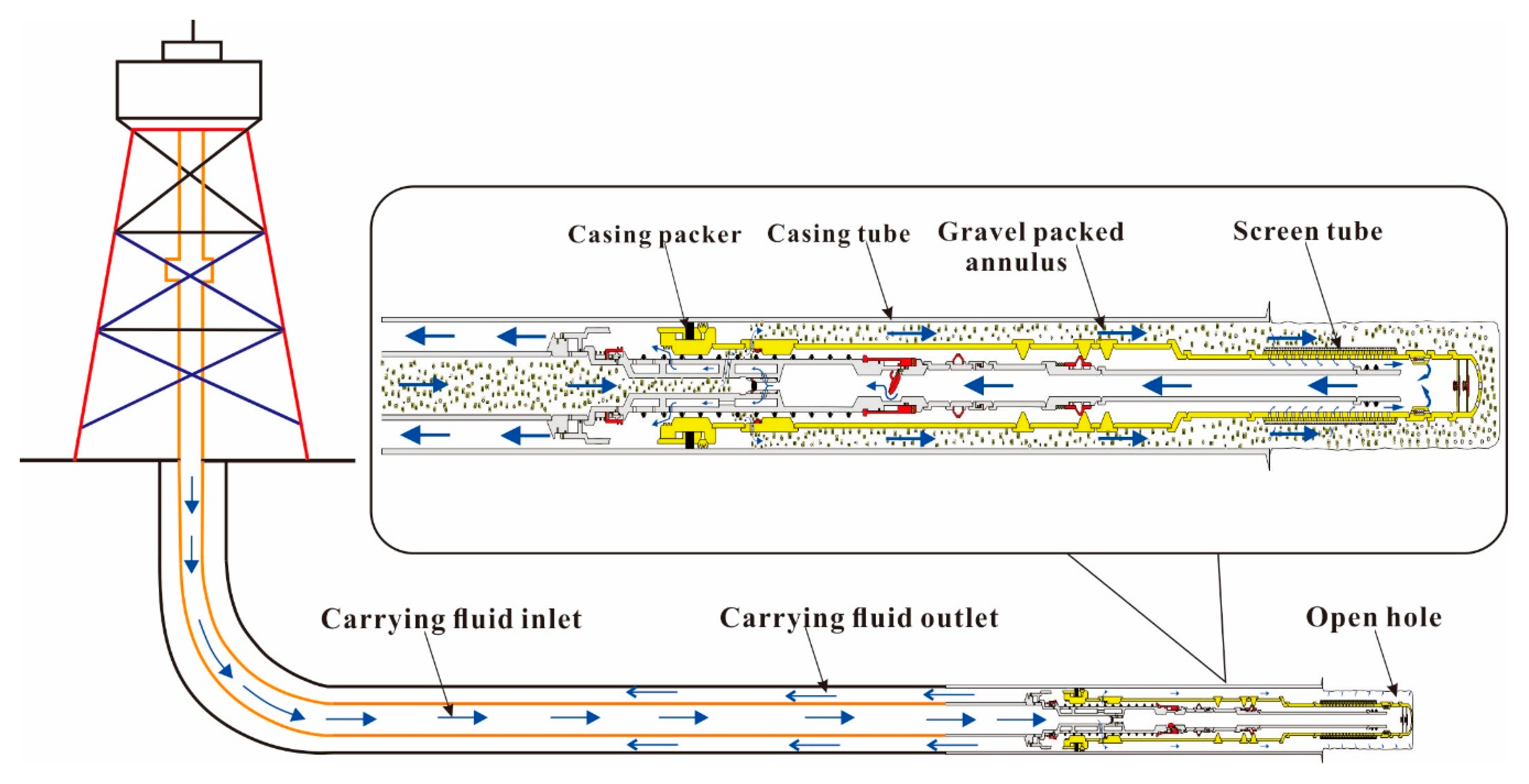 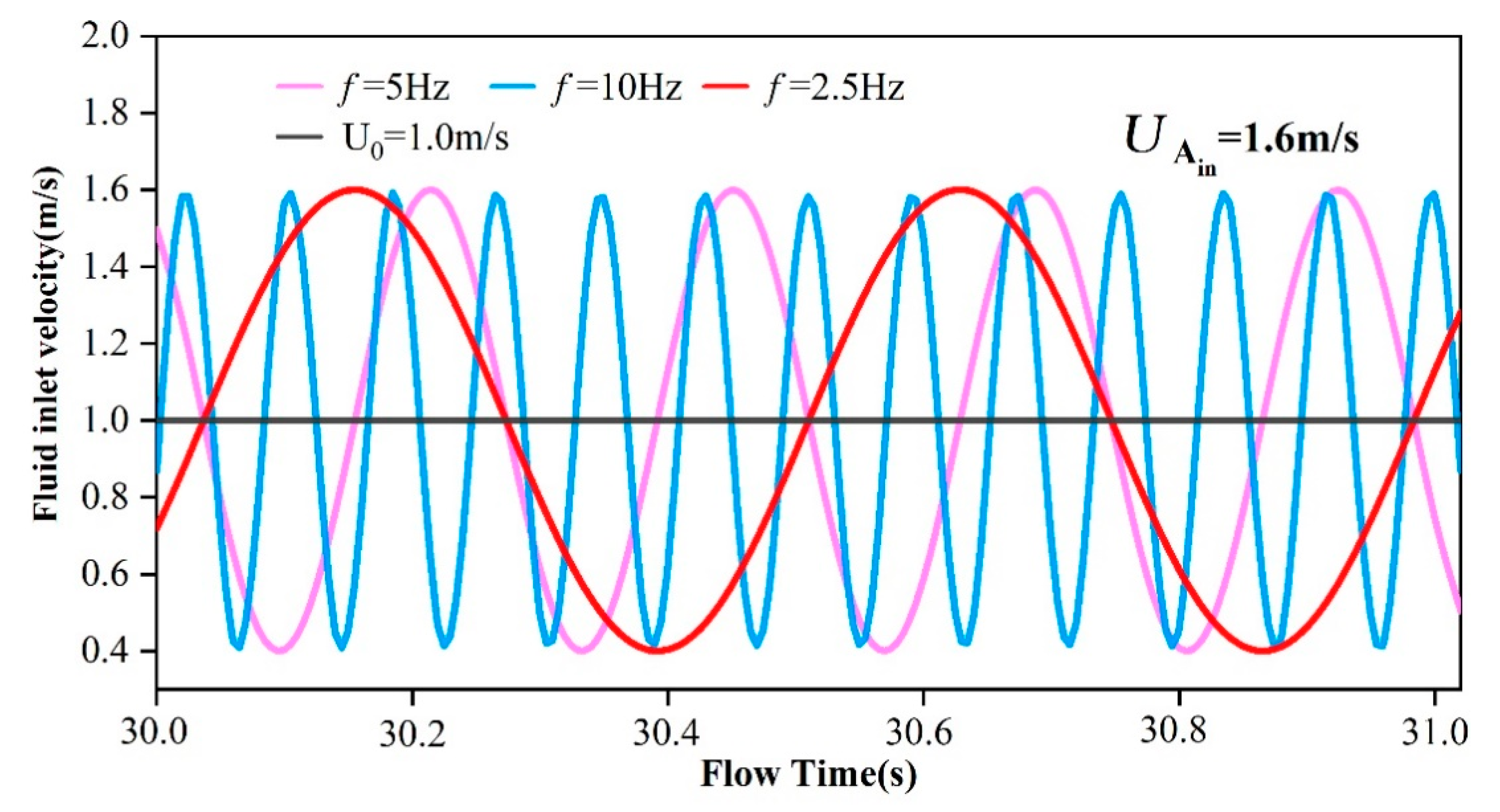 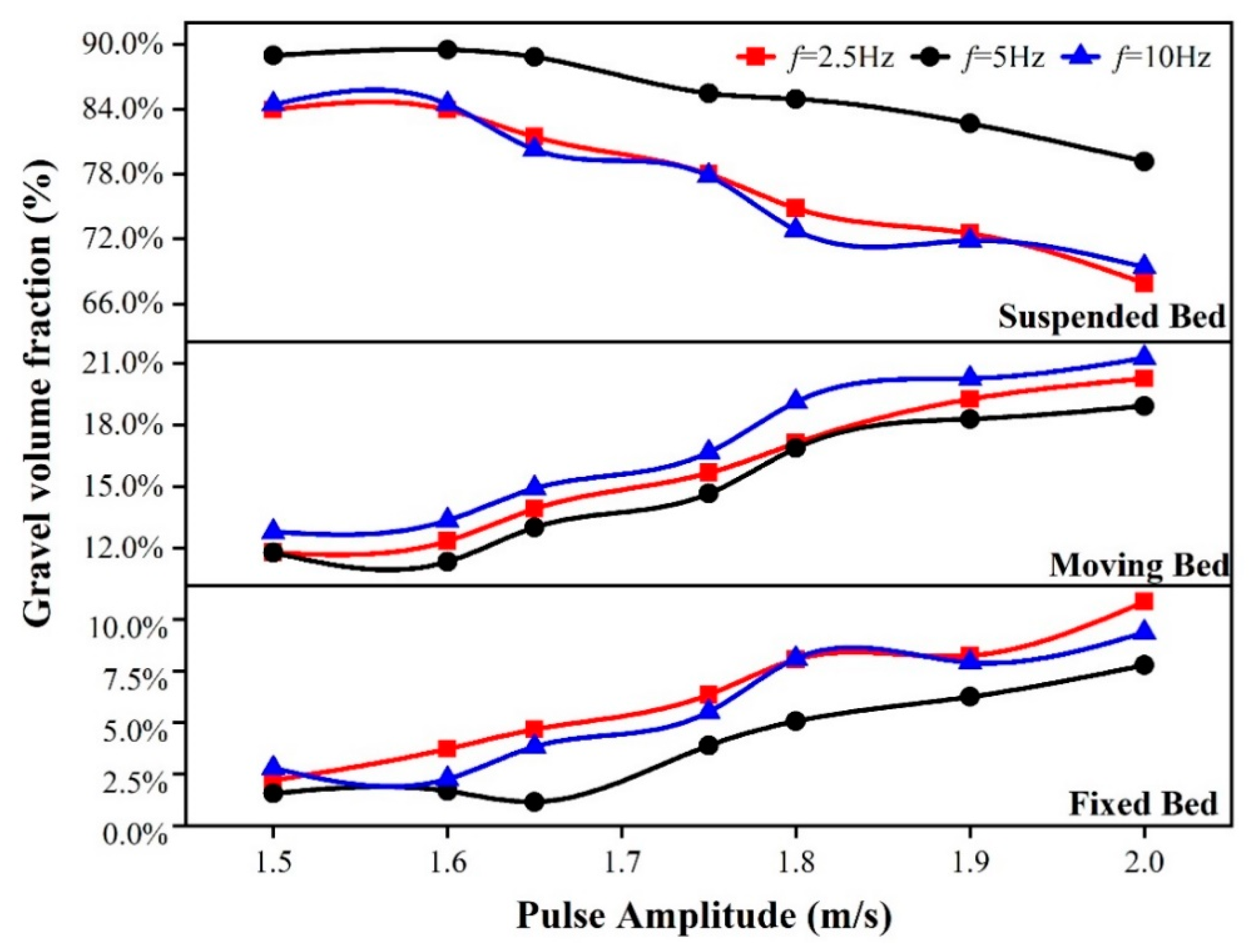 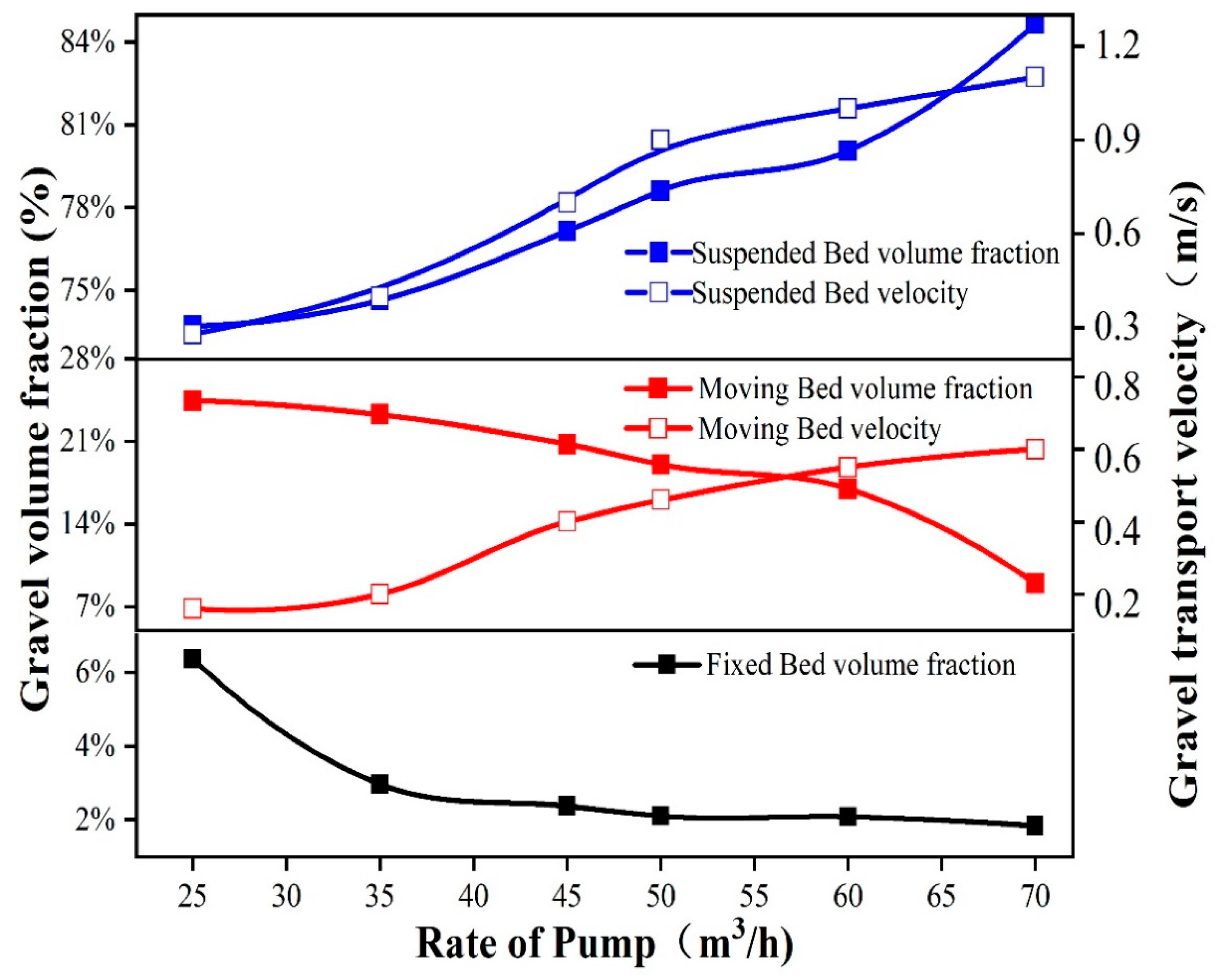 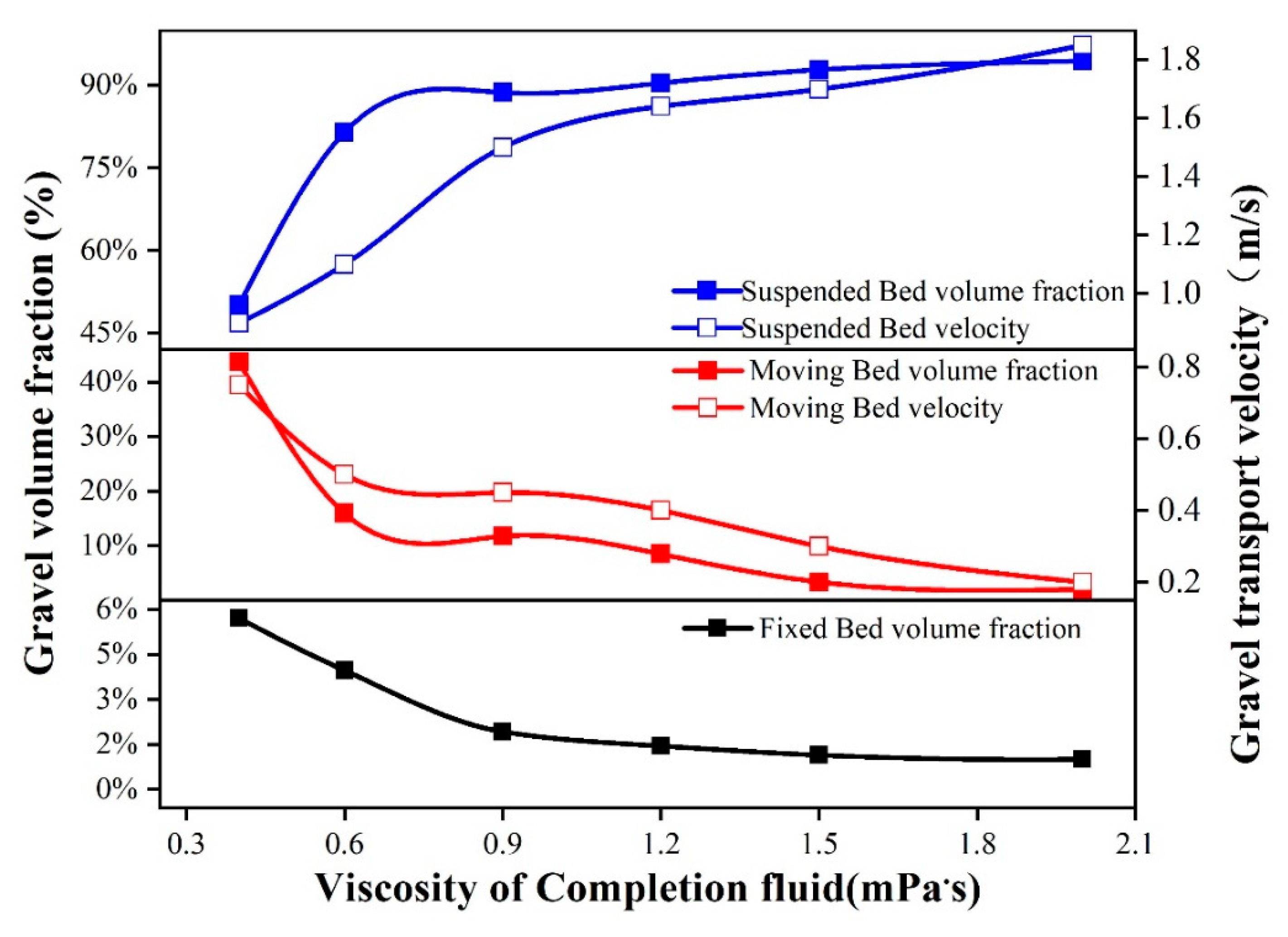 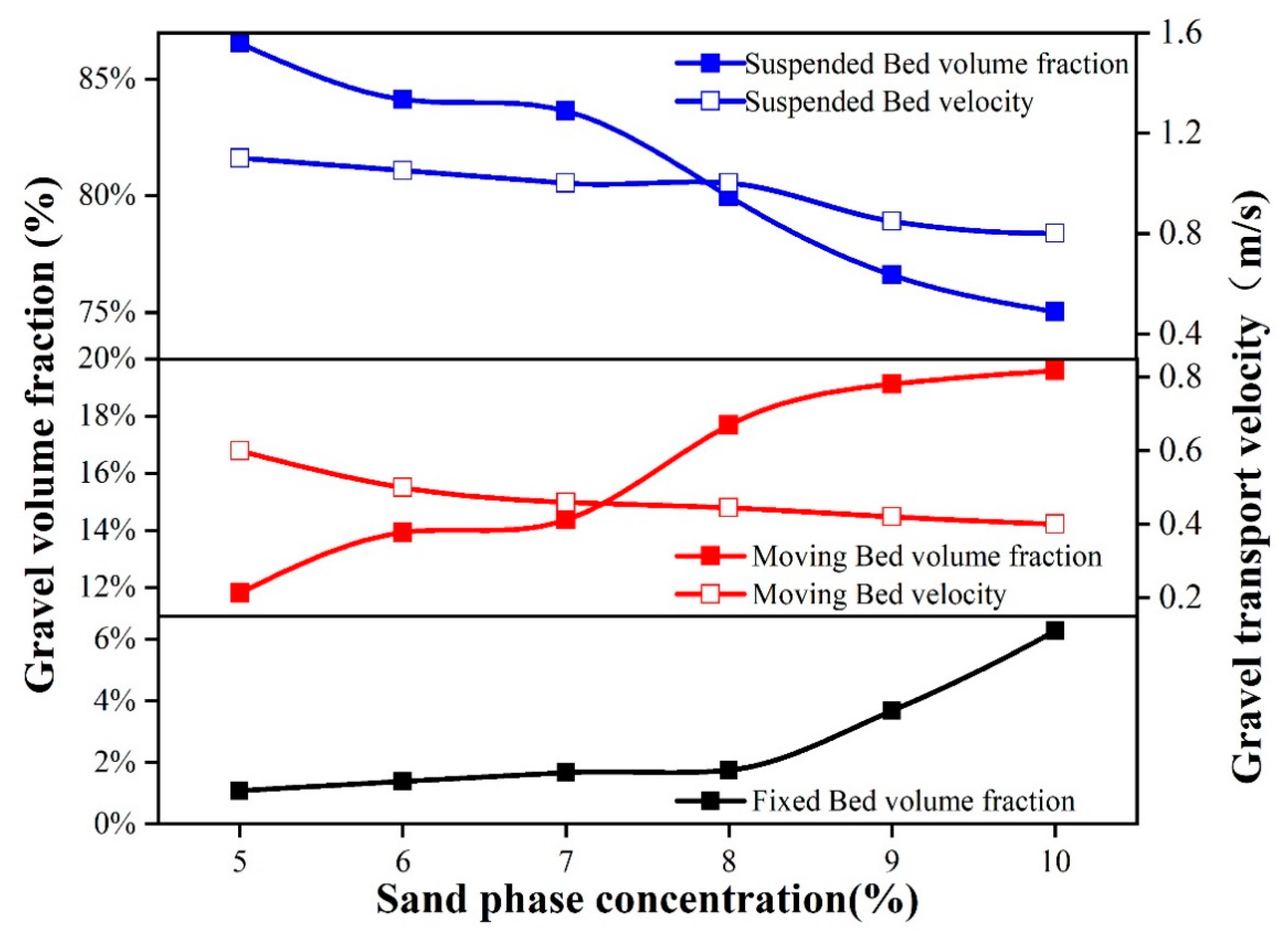 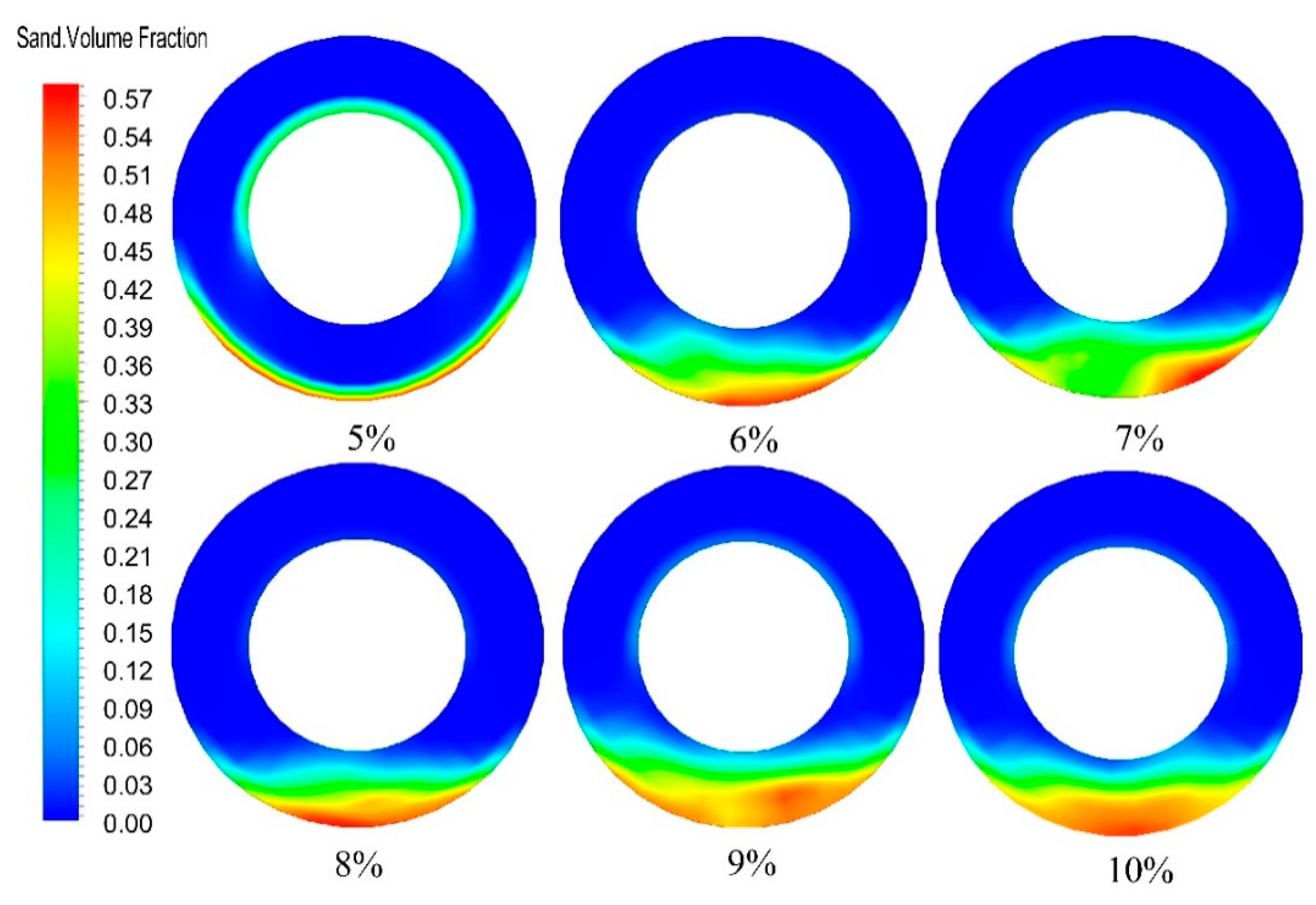 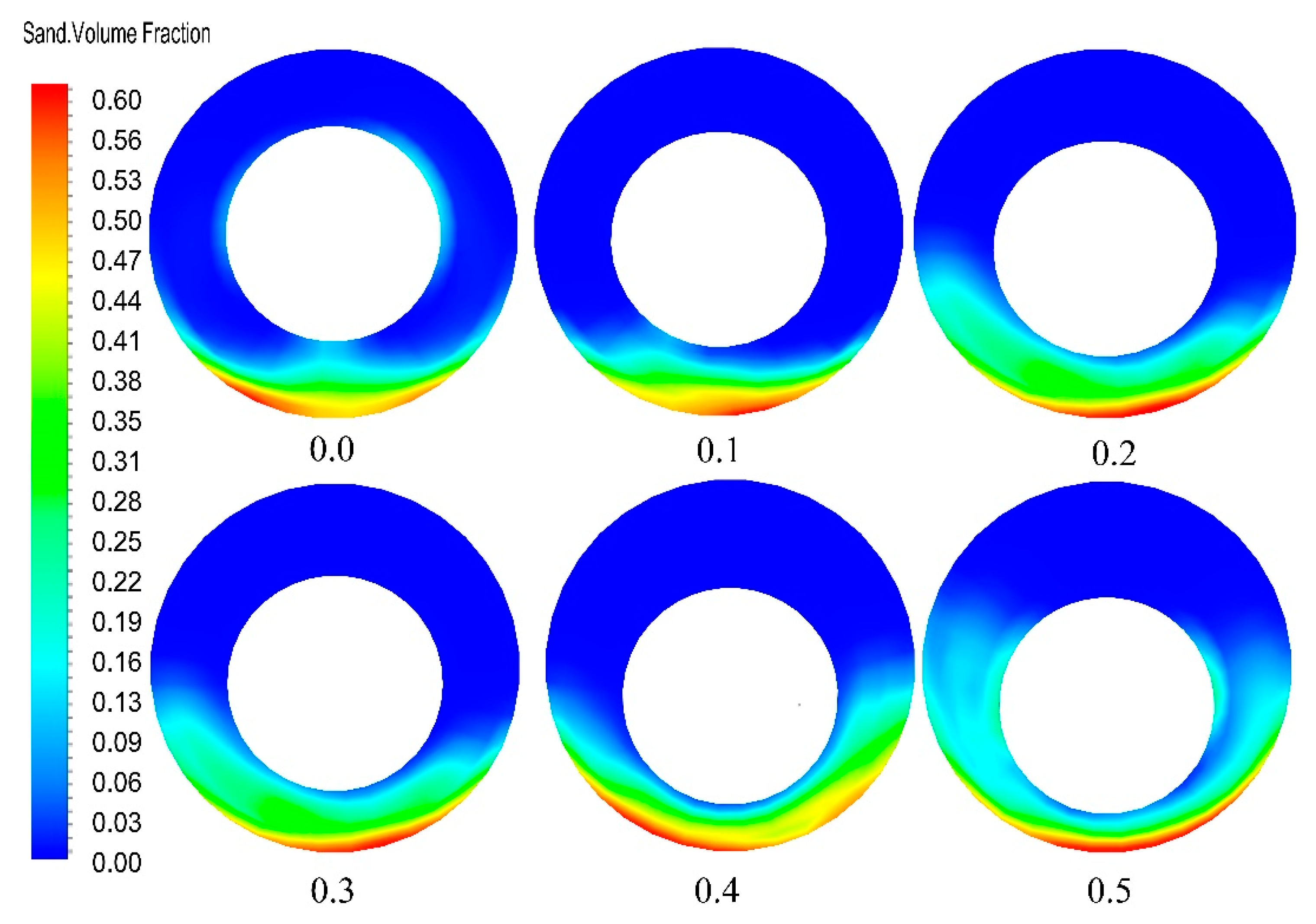