Can Nuclear Batteries Be Economically Competitive in Large Markets?
Next Article in Special Issue

A New Zealand Perspective on Hydrogen as an Export Commodity: Timing of Market Development and an Energy Assessment of Hydrogen Carriers
Previous Article in Journal

This paper shows the results of an in-depth techno-economic analysis of the public transport sector in a small to midsize city and its surrounding area. Public battery-electric and hydrogen fuel cell buses are comparatively evaluated by means of a total cost of ownership (TCO) model building on historical data and a projection of market prices. Additionally, a structural analysis of the public transport system of a specific city is performed, assessing best fitting bus lines for the use of electric or hydrogen busses, which is supported by a brief acceptance evaluation of the local citizens. The TCO results for electric buses show a strong cost decrease until the year 2030, reaching 23.5% lower TCOs compared to the conventional diesel bus. The optimal electric bus charging system will be the opportunity (pantograph) charging infrastructure. However, the opportunity charging method is applicable under the assumption that several buses share the same station and there is a “hotspot” where as many as possible bus lines converge. In the case of electric buses for the year 2020, the parameter which influenced the most on the TCO was the battery cost, opposite to the year 2030 in where the bus body cost and fuel cost parameters are the ones that dominate the TCO, due to the learning rate of the batteries. For H2 buses, finding a hotspot is not crucial because they have a similar range to the diesel ones as well as a similar refueling time. H2 buses until 2030 still have 15.4% higher TCO than the diesel bus system. Considering the benefits of a hypothetical scaling-up effect of hydrogen infrastructures in the region, the hydrogen cost could drop to 5 €/kg. In this case, the overall TCO of the hydrogen solution would drop to a slightly lower TCO than the diesel solution in 2030. Therefore, hydrogen buses can be competitive in small to midsize cities, even with limited routes. For hydrogen buses, the bus body and fuel cost make up a large part of the TCO. Reducing the fuel cost will be an important aspect to reduce the total TCO of the hydrogen bus. View Full-Text
Keywords: electric bus; hydrogen bus; zero-emission buses (ZEB); city bus; public transport; total cost of ownership (TCO) electric bus; hydrogen bus; zero-emission buses (ZEB); city bus; public transport; total cost of ownership (TCO)
►▼ Show Figures 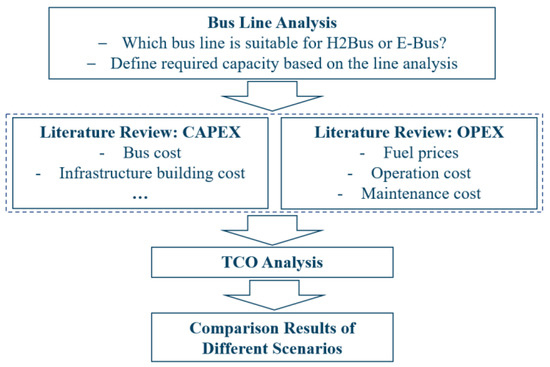