The major objective of the investigation reported in this article is to demonstrate the feasibility of controlling a Doubly Fed Induction Generator actuating directly on the rotor voltage produced by the Rotor Side Converter, as its reference value may be determined analytically, after definition of the control objective. Two usual objectives are here considered: maximum power extraction from wind (MPPT) and stator reactive power equal to zero. This last objective defines the reference slip to be considered in the formulation of developed power that, jointly with the reactive power equation, forms the system to calculate the rotor reference voltages. The process is completed by specifying the desired dynamical response. Thus, the angular velocity of the rotor should quickly reach its reference value, which requires maximal power acceleration at the beginning, but respects the restriction that no overshoot should be allowed. This is achieved by means of a constrained optimization process solved in real time. Following recent trends, only measurements obtained from stator (voltages and currents) sensors are used. This way, angular velocity and rotor currents are estimated in real time. An algorithm for inductance estimation is also included, which prevents deviations of nominal values that could lead to false reference voltages. View Full-Text
Keywords: DFIG optimal control; direct control; minimal sensors set; MPPT; transient stability; WECS DFIG optimal control; direct control; minimal sensors set; MPPT; transient stability; WECS
►▼ Show Figures 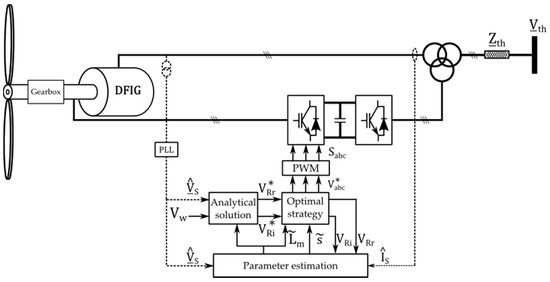