The mechanical power and wake flow field of a 1:40 scale model of the US Department of Energy’s Reference Model 1 (RM1) dual rotor tidal energy converter are characterized in an open-channel flume to evaluate power performance and wake flow recovery. The NACA-63(4)-24 hydrofoil profile in the original RM1 design is replaced with a NACA-4415 profile to minimize the Reynolds dependency of lift and drag characteristics at the test chord Reynolds number. Precise blade angular position and torque measurements were synchronized with three acoustic Doppler velocimeters (ADV) aligned with each rotor centerline and the midpoint between the rotor axes. Flow conditions for each case were controlled to maintain a hub height velocity, 1.04 ms, a flow Reynolds number, 4.4 × 10, and a blade chord length Reynolds number, 3.1 × 10. Performance was measured for a range of tip-speed ratios by varying rotor angular velocity. Peak power coefficients, 0.48 (right rotor) and 0.43 (left rotor), were observed at a tip speed ratio, 5.1. Vertical velocity profiles collected in the wake of each rotor between 1 and 10 rotor diameters are used to estimate the turbulent flow recovery in the wake, as well as the interaction of the counter-rotating rotor wakes. The observed performance characteristics of the dual rotor configuration in the present study are found to be similar to those for single rotor investigations in other studies. Similarities between dual and single rotor far-wake characteristics are also observed. View Full-Text
Keywords: marine energy; wake flow; rotor performance marine energy; wake flow; rotor performance
►▼ Show Figures 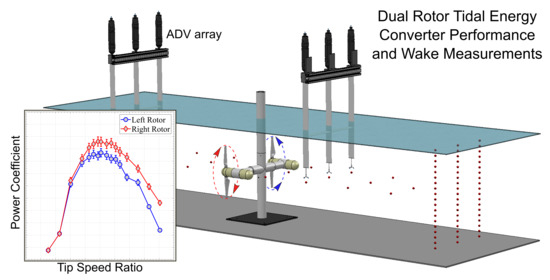