A Review of Criticisms of Integrated Assessment Models and Proposed Approaches to Address These, through the Lens of BECCS
Next Article in Special Issue 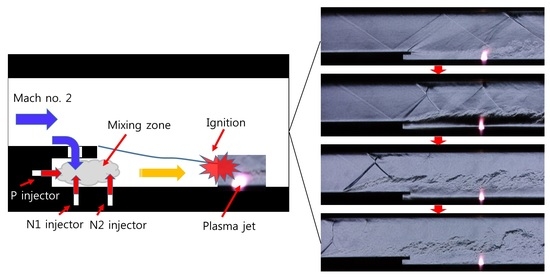 Hypersonic vehicle concepts for high-altitude passenger planes or space launchers have been designed based on dual-mode scramjet engines or rocket-based combined cycle (RBCC) engines [1,2]. These hypersonic vehicles are initially accelerated by the rocket booster to obtain the sufficient inflow air speed required for start-up of the scramjet engines. Before the scramjet engines operate, the inflow air into the combustor changes from subsonic to supersonic flow, which is called dual-mode. Dual-mode scramjet engines start from a flight Mach number of 2 with shock trains in the isolator [1]. When the flight Mach number goes beyond 5, the combustion mode changes to the supersonic combustion (or scramjet) mode. Under this transition mode, the isolator is generally used to prevent the shock train from affecting the intake of the vehicle [3].
For supersonic combustion, it is necessary for some mixers to hold the flame and to blend the fuel-air mixture in the supersonic flow [4]. These mixers are generally categorized into two types: passive methods and active methods. Passive methods, such as a cavity [5] and a step [6,7], provide a space to hold the fuel-air mixture with minimum flow disturbance to the supersonic flow. Of these, the step mixer is often chosen as the passive mixing device due to its simple geometric structure. However, the recirculation region generated behind a step mixer is considered to be a dead region [6]. Although there is a circular flow in the recirculation region, it is not sufficient to stir the fuel-air mixture. Furthermore, even though several injectors are equipped to actively inject fuel into the recirculation region, mixing enhancement has not been observed in past studies [7]. The active methods induce aerodynamic fluctuation to enhance mixing. For instance, Helmholtz resonators [8] create an acoustic wave and hyper mixers [9,10] generate stream-wise vortices by a pressure gradient.
From these mixer models, to enhance mixing in the supersonic combustor, it is considered that a subsonic recirculation region is essential for an active stirring system. It is adequate to select the step mixer for a duct-type combustor to develop a new mixer associated with the concept. Moreover, for the dual-mode scramjet, the upstream area of the step mixer is the isolator and the enlarged downstream duct is used as the combustor. An air blowing device is applied to the step mixer to actively provide air into the recirculation region behind the step mixer. This new mixer is named the vent slot mixer, and this has been already studied in previous work [11,12]. The detailed design is discussed later in this paper.
In the previous work [12], the inflowing air through the slot enlarges the jet plume developed by the normal injection. The relationship between the vent mixer and the normal injection position has an effect on the mixing performance. In addition, the position of the injectors in the recirculation region is an important factor because the fuel (injectant) remnant is dependent on the injection direction in the recirculation region [13]. Because of this, several injectors were installed in different locations of the recirculation region in the current work. The previous work [12,13] utilized the slot to supply air into the recirculation region, but the current work considers the difference between the mixing and combustion performances according to the usage of the slot and circular holes.

The rectangular duct-type supersonic combustor model was composed of a Mach 2 half nozzle and a discontinuous rectangular duct, as shown in Figure 1. The isolator was 50 mm long and 30.7 mm high, and the combustor was 210 mm long and 36.7 mm high. The pressure ratio between the isolator inlet and outlet was 2:1 and designed using Billig’s formula [3]. Air in the laboratory room was drawn into a vacuum tank of 5 kPa and then accelerated through the Mach 2 half nozzle. The unit Reynolds number of the mixer model was about 6.6 × 105 per meter. Hydrogen gas was used as an injectant. There were three injectors: a parallel injector (P), a normal 1 injector (N1), and a normal 2 injector (N2). A detailed description of these injectors is shown in Figure 1.
The mixer models were attached to the lower wall. Two new mixer models were employed; one was a vent slot mixer (VSM), and the other was a vent circle mixer (VCM). The step mixer is generally chosen as the mixer model for a supersonic combustor owing to its simple structure, however, it has poor mixing performance in the recirculation region behind it. To enhance the mixing performance, the vent mixer was developed to actively provide air into the recirculation region behind the step mixer. The configuration of the vent mixers is shown in Figure 2. The vent mixer had an extended block from the step wall, which was 6 mm long and 2 mm thick. To supply the main air into the recirculation region, a slot or several circular holes were perforated in the extended block. The VSM had a slot and the VCM had circular holes, and these are detailed in Figure 2. The slot and circular holes were selected to compare the difference between the two-dimensional inflow of the slot and three-dimensional inflow of the circular holes in the recirculation region.
The igniter and measurement methods in the current test were utilized under the same conditions of the previous tests [7,11,12]. A plasma jet (PJ) torch was used as the heat source to ignite the hydrogen [14]. The PJ was injected from a 1.5 mm diameter hole, which was placed at 60 mm from the mixer wall, with a power of 2.5 kW [15]. Schlieren images were captured using a stroboscope lamp with a pulse time of 180 ns and a digital camera (Canon EOS-D30), and then the original images were processed with the unsharp mask filter of Adobe Photoshop CS. Static pressures on the wall were recorded by strain-gauge type pressure transducers (PDCR23D-200psi, Scanivalve Inc., Liberty Lake, WA, USA) with a frequency of 10 Hz. The injection pressure was measured by a PAB-A200KP pressure transducer (Kyowa Inc., New York, NY, USA). A gas-sampling technique was carried out to measure the residual gas on the lower wall through the pressure ports. The sample gas was evacuated to a small gas-sampling chamber of 0.4 kPa for 10 s after each run, and it was analyzed with a Micro-GC analyzer (CP-4900, Varian Inc., Palo Alto, CA, USA). The gas-sampling uncertainty was less than 1% for N2 and 6% for O2 and H2.

This work was carried out to study the performance of vent mixer models in a laboratory-scaled supersonic combustor facility, with forced ignition by a plasma jet torch performed with the cold main flow.
In the mixing test, the inflow air through the slot or circular holes of the mixers enhances the mixing characteristics, particularly span-wise dispersion, while the injectant is emitted in the recirculation region. In other words, the mixers are effective at dispersing the hydrogen-air mixture by direct interaction between the inflow air and the injection. On the other hand, injection out of the roof-plate of the mixer is little affected by the inflow air through the slot or circular holes of the mixers. Furthermore, the mixing pattern shows similar performance irrespective of hole shape, such as a slot or circular hole, on the roof-plate of the mixer.
Under the unheated main flow condition, the combustion is sensitive to the hydrogen flow rate supplied to the plasma jet in the small-scaled combustor. Although the fuel-air mixture is widely dispersed in the shear layer or the recirculation region, it is difficult to ignite the fuel-air mixture without the heat source. First of all, thermal choking occurs for the parallel injection for ER = 0.03 regardless of the mixer models, compared with the normal 1 and normal 2 injections. For the parallel injection, although the mixing performances of the VSM and the VCM are similar to each other, thermal choking is observed earlier for the VSM than the VCM. For the normal 1 injection, both the vent mixers show similar mixing and combustion performances. The normal 2 injection has the poorest combustion performance compared with the other injection cases, and the VSM is slightly superior to the VCM in terms of the combustion pressure rise. The flow is easily thermally choked for lower equivalence ratios due to the low total temperature of the main flow. In this sense, particularly for the small combustor, it is considered that the subtle difference between fuel-air mixture rates toward the plasma jet leads to a large difference in the combustion performance. 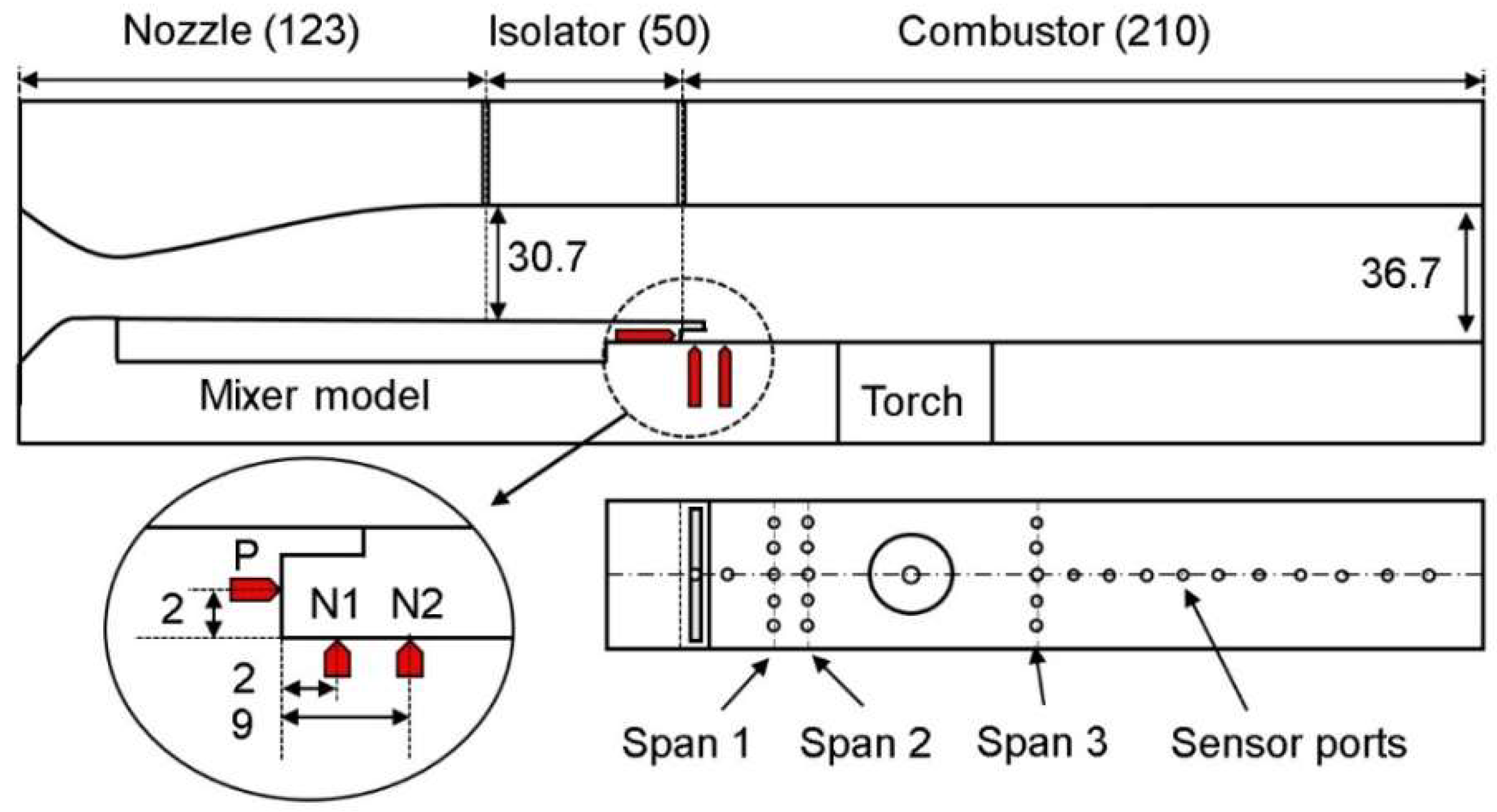 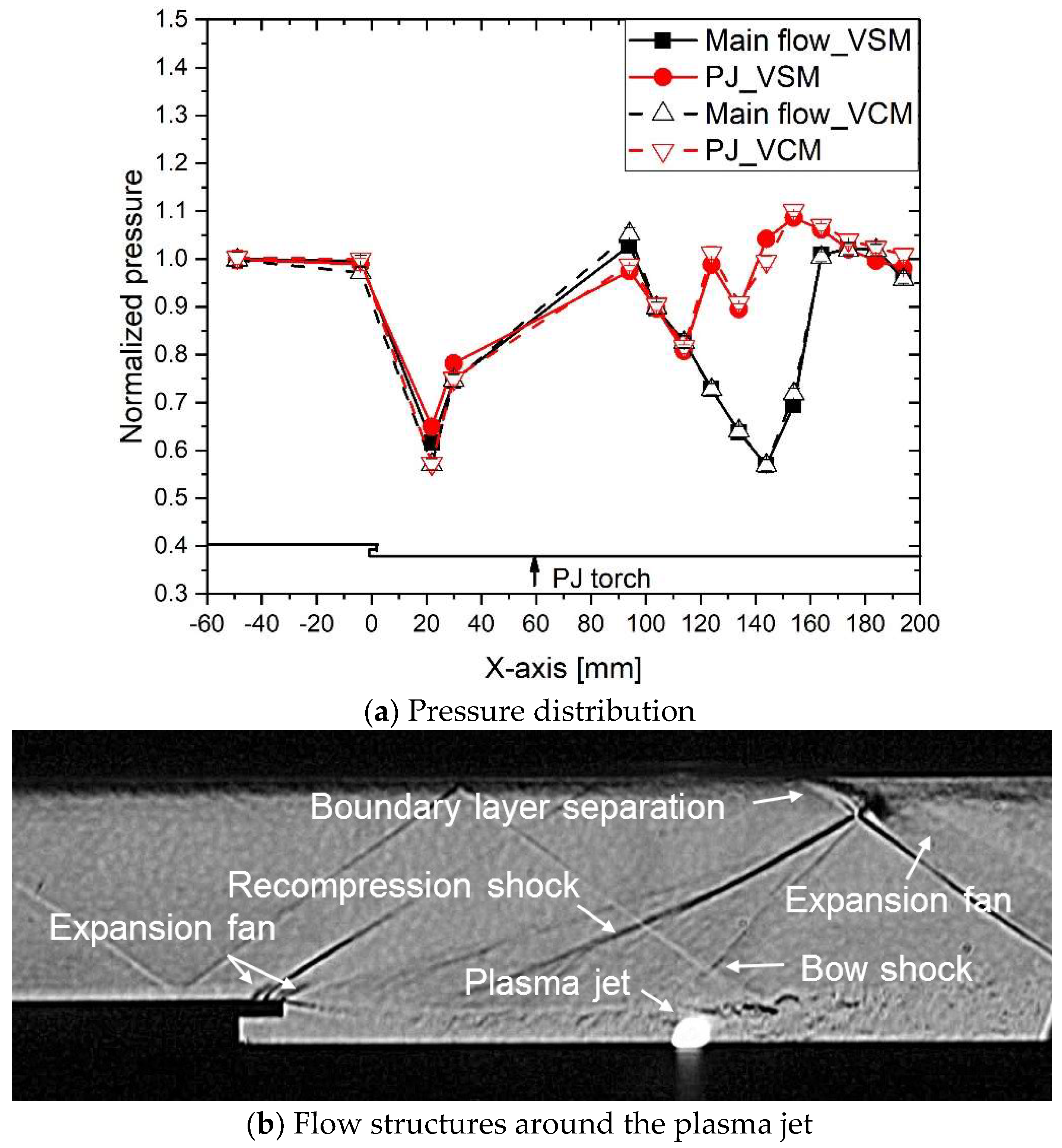 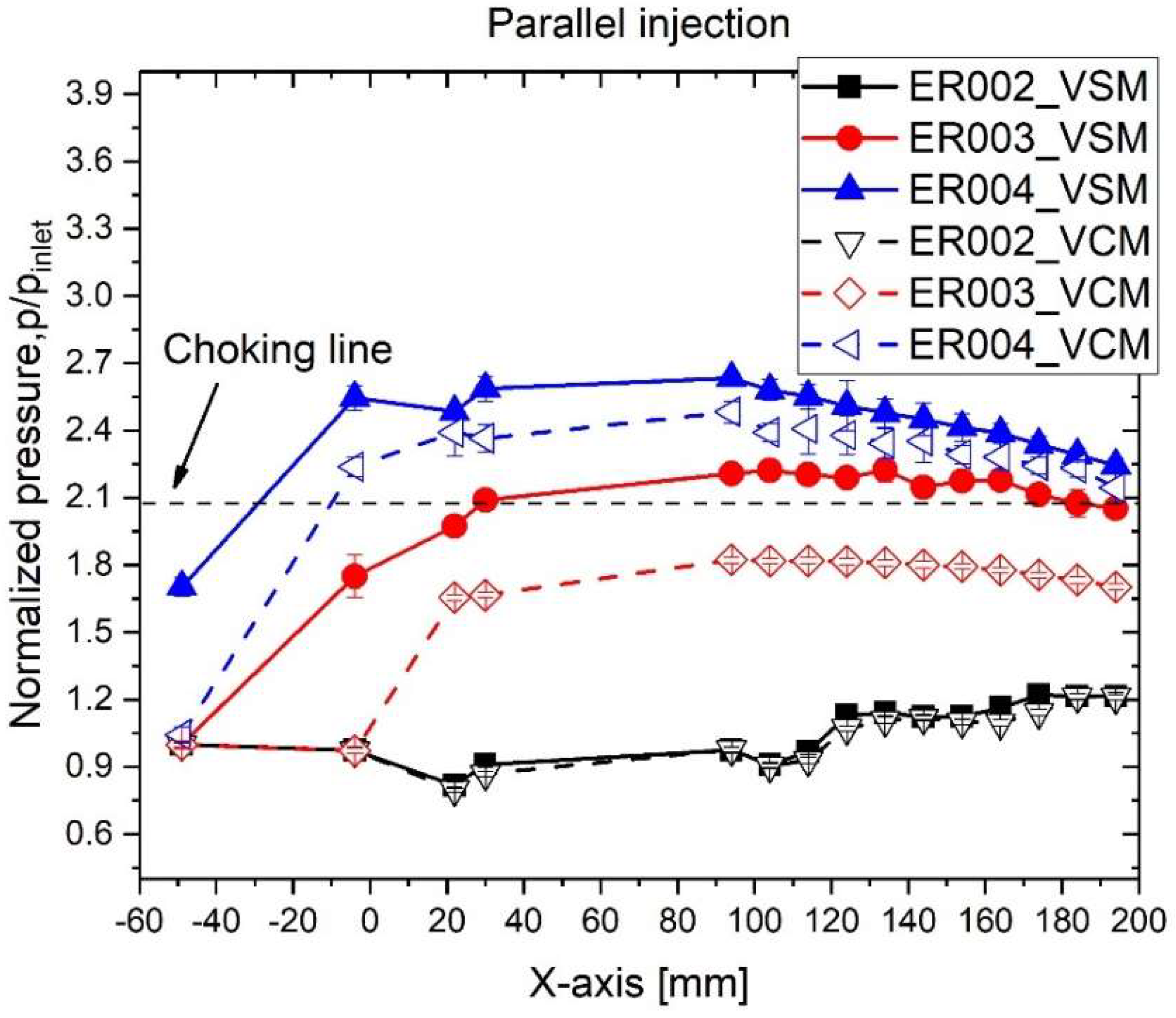 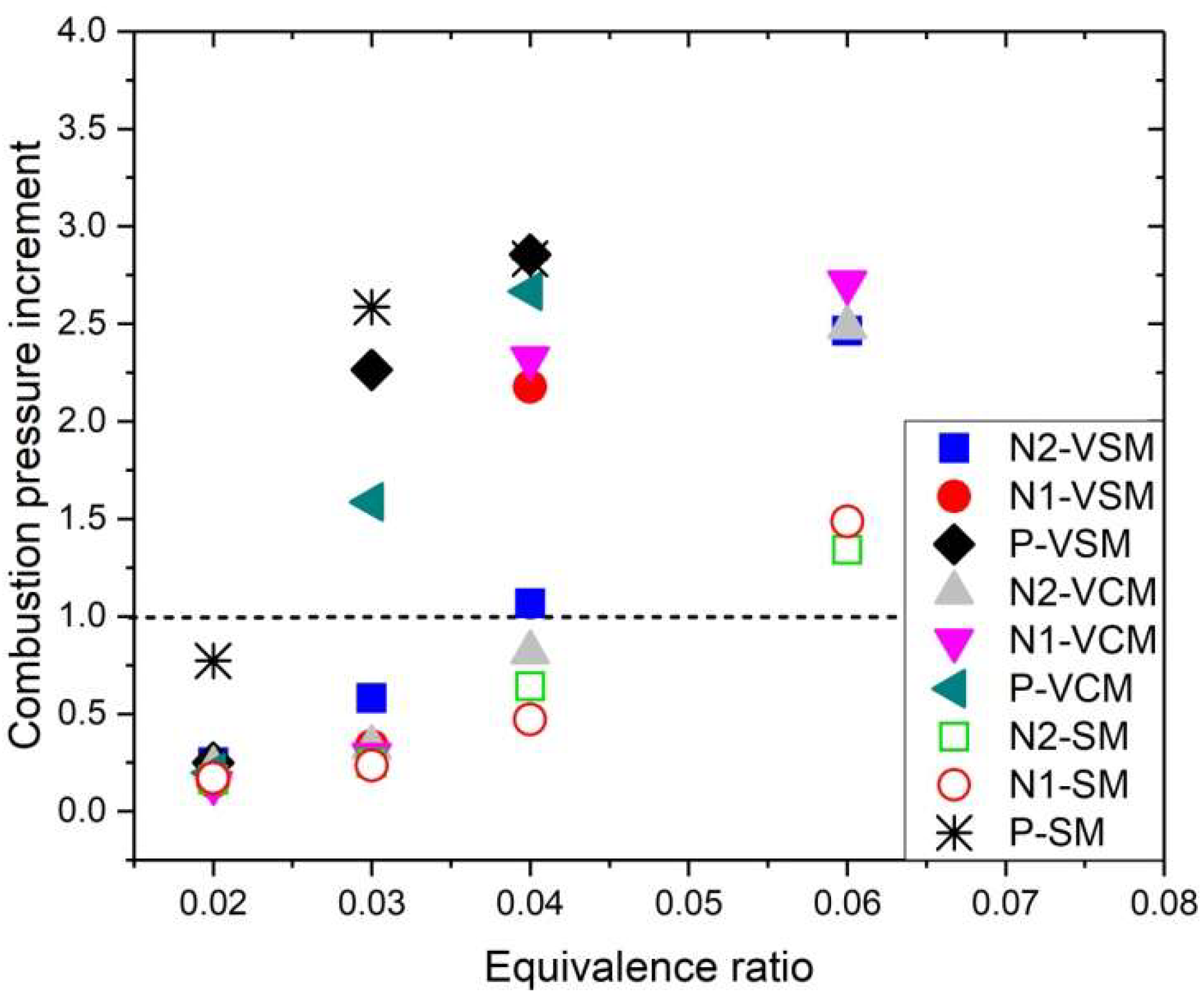