Control and Restrictions of a Hybrid Renewable Energy System Connected to the Grid: A Battery and Supercapacitor Storage Case

:
Nanofluids, which are liquids containing nanoparticles, are used to modify heat transfer performance in various systems. To explain the mechanism of heat transfer modification with nanofluids, many theories have been suggested based on numerical simulations without experimental validation because there is no suitable experimental method for measuring the velocity fields of nanofluid flows. In this study, the measurement accuracy of micro-particle image velocimetry (μ-PIV) is systemically quantified with Al2O3 and multi-walled carbon nanotube (MWCNT) nanofluids. Image quality, cross-correlation signal-to-noise ratio, displacement difference, and spurious vector ratio are investigated with static images obtained at various focal plane positions along the beam pathway. Applicable depth is enough to investigate micro-scale flows when the concentrations of Al2O3 and MWCNT nanofluids are lower than 0.01% and 0.005%, respectively. The velocity fields of Hagen–Poiseuille flow are measured and compared with theoretical velocity profiles. The measured velocity profiles present good agreement with the theoretical profiles throughout. This study provides the criteria for μ-PIV application and demonstrates that μ-PIV is a promising technique for measuring the velocity field information of nanofluids.
Keywords:
nanofluids; velocity field measurement; particle image velocimetry; correlation signal-to-noise ratio

Over the past century, energy consumption reduction has received much attention in various research fields. In heat transfer systems such as heat exchangers and electronic components, many researchers have focused on the reduction of energy consumption called heat transfer enhancement [1,2]. As recent systems are becoming compact in size, shape, and weight, traditional methods of heat transfer are inadequate. To improve heat transfer performance in miniaturized systems, nanofluids, which are liquids containing nanometer-sized particles called nanoparticles, were introduced in 1995 by Choi and Eastman [3]. Nanofluids showed better thermal characteristics than base fluids. Since then, various studies have been widely conducted in the research fields of heat transfer using nanofluids, and it is found that the addition of nanoparticles affects thermo-physical properties such as thermal conductivity, viscosity, and surface tension [4,5,6,7,8,9,10,11,12,13].
In addition to conductive heat transfer related to thermo-physical properties, convective heat transfer using nanofluids has also been studied [13,14,15,16,17]. The Nusselt number for nanofluids is different to that for base fluids. This means that the addition of nanoparticles alters the convective heat transfer mechanism. To design an efficient heat exchanger with nanofluid convection, a prerequisite is precise understanding of the mechanism. Therefore, many researchers have proposed several mechanisms including the effect of Brownian motion, thermophoresis, and aggregation to explain the alteration of convective heat transfer due to the suspension of nanoparticles in a simple fluid [13,17,18]. These theories were derived based on the investigation of flow phenomena using numerical simulation because convective heat transfer is closely related to mass transfer by flows. However, these theories have not been experimentally validated because there is no detailed experimental flow information yet.
To measure the quantitative velocities of fluid flows, various techniques including hot wire, pitot tube, laser Doppler velocimetry (LDV), and particle image velocimetry (PIV) have been commonly employed [19]. The hot-wire and pitot-tube methods use a probe, which can disturb flows. LDV is a non-intrusive measurement method. However, it is not suitable for measuring information about the entire velocity field of fluid flows because it is a point-wise measurement technique. PIV is a non-intrusive optical technique measuring two-dimensional velocity fields with a high spatial resolution. Recently, PIV using tracing particles seeded in a working fluid has come to be utilized as a powerful and reasonable velocity field information measurement technique [20]. In a conventional PIV technique, a thin light sheet generated by laser and optics illuminates a plane in the flow and scattered light from a seeded particle is recorded using a camera with a macro lens. The incident laser light sheet is not retained owing to light absorption, diffraction, and refraction caused by the suspended nanoparticles in the nanofluids. Therefore, the conventional PIV technique using a laser sheet is inapplicable to measure the velocity field information of nanofluids.
Santiago et al. [21] introduced a micro-PIV (μ-PIV) system in which a microscope was implemented as a key element. In the μ-PIV technique, light is illuminated on the volume instead of a thin light sheet. The location and thickness of the measurement plane are determined by the focal plane and numerical aperture of an objective lens, respectively. To our knowledge, only Walsh et al. [22] attempted to measure nanofluid flows using the μ-PIV technique. Although the study suggested the measurement feasibility with a qualitative observation, no research has been reported on the velocity field measurement of nanofluid flows using the μ-PIV technique since then because of the lack of systematic quantitative analysis of the measurement accuracy, which is essential for practical use.
In this study, we systematically analyze the measurement accuracy of the μ-PIV technique for measuring nanofluid flows. Al2O3 and multi-walled carbon nanotube (MWCNT) nanofluids at various concentrations are used as test samples. To quantify the effect of focal depth on the measurement accuracy, a cross-correlation signal-to-noise ratio (SNR) is calculated using static images acquired at various depths. Velocity fields of simple tube flows are measured to investigate the effects of particle motion and velocity gradient on the measurement accuracy.

In this study, Al2O3 and MWCNT nanofluids with deionized (DI) water as the base fluid were prepared to analyze the measurement accuracy of μ-PIV. Al2O3 nanoparticles are most widely used owing to their easy availability and low cost. MWCNT nanofluids represent high enhancement in Nusselt number in most of the previous studies [13]. A two-step method was employed to prepare nanofluid solutions [5]. To prepare the nanofluids, Al2O3 nanoparticles and MWCNT were purchased from KoreaRND. α-Al2O3 nanoparticles with a mean size of 80 nm and purity of 99.9% were selected. MWCNT with the carboxyl group was employed for dispersion stability. MWCNTs have a mean diameter of 5–10 nm, length of 10–30 μm, and purity of more than 95%. Al2O3 (0.005, 0.01, 0.1, 1, and 2.5 vol%) and MWCNT (0.005 and 0.01 vol%) nanofluids with different concentrations were prepared.
Various surfactants such as sodium dodecyl sulfate, gum arabic, and cetyltrimethylammonium bromide (CTAB) were employed to enhance the dispersion stability of Al2O3 nanoparticles in the base fluid, and the cationic dispersant CTAB among various surfactants represents the best stability [23,24]. In this study, CTAB was added to the nanofluids to keep the particles properly spread in the base fluid. The added CTAB was 0.25 times of Al2O3 in mass. After dispersing the nanoparticles and CTAB in DI water, the nanofluids were stirred by a magnetic stirrer for 30 min. Thereafter, for better stability, the pH level was also controlled to avoid reaching the iso-electrical point (IEP) at which stability deteriorates. The IEP of Al2O3 nanofluids is 8 and the pH of nanofluids was reduced to 3 by adding a buffer solution of NaOH and HCl at 0.1 mM. Finally, Al2O3 nanofluids were prepared by an ultrasonification process (STH-750S, Sonictopia) for 1 h. MWCNT nanofluids were prepared by the same procedure except for the surfactant addition and pH control. The viscosity of Al2O3 is 1.01, 1.01, 1.02, 1.09 and 1.17 mPa·s when the concentration of Al2O3 is 0.005%, 0.01%, 0.1%, 1% and 2.5%, respectively. The density of Al2O3 is 998.2, 998.3, 998.9, 1005.5 and 1016.8 kg/m3 when the concentration of Al2O3 is 0.005%, 0.01%, 0.1%, 1% and 2.5%, respectively. The viscosity of MWCNT is 0.98 and 1.01 mPa·s when the concentration of MWCNT is 0.005% and 0.01%, respectively. The both densities of MWCNT are 998.2 kg/m3 when the concentration of MWCNT is 0.005% and 0.01%.

Figure 1 shows the schematic representation of the experimental setup of microscopic imaging system. A 2.8 W continuous laser (Shanghai Dream Laser Technology, Ltd., Shanghai, China) was employed in the present study to excite polymer fluorescence particles with 0.5 μm average diameter (Duke Scientific Corporation, CA, USA). Two plano-convex lenses were used to expand the beam and the corresponding focal lengths are 250 and 50 mm, respectively. A narrow focal plane was formed using a 20× water immersion objective lens with a NA of 0.5. The depth of correlation (δzcorr), which is highly related to the particle images, was influenced by the focal plane thickness [25]. δzcorr is calculated as follows [26]: where f# is the focal number of the lens, dp is the particle diameter, M is the lens magnification, λ is the fluorescent wavelength, and ε is the signal threshold parameter. The corresponding δzcorr was 12 μm. A 532 nm notch filter was employed to obstruct the backscattering of green light. Images were acquired by a high-speed camera (SA 1.1, Photron, Japan) at 2000 fps for a static fluid and 500 (Reynolds number (Re) = 1) and 5000 (Re = 10) fps for tube flows. The field of view was 1000 × 1000 μm (1024 × 1024 pixels).
For quantifying the measurement accuracy, a simple rectangular chamber with a slide glass cover was made. Mixtures of nanofluid and fluorescent microparticles were filled in the chamber and static fluid images at various depths were acquired. The depth (positive z in Figure 1) was described from the upper cover. To validate the measurement feasibility under actual flow conditions, the nanofluid with fluorescent microparticles was pumped into fluorinated ethylene propylene microtube with a diameter of 500 μm using a syringe pump. The volume flow rate was 0.025 and 0.25 mL/min with Re of about 1 and 10, respectively.

In this study, the measurement accuracy of the μ-PIV technique is systemically quantified for measuring nanofluid flows with static images captured at various depths. Al2O3 and MWCNT nanofluids with different concentrations were prepared. Image quality is strongly affected by the depth of the imaging plane owing to the semi-transparent optical property of nanofluids. The cross-correlation SNR, displacement difference, and spurious vector ratio were analyzed with artificial image pairs. The applicable depth is up to a z of 1000 μm, which is enough in the investigation of micro-scale flows when the concentrations of Al2O3 and MWCNT nanofluids are lower than 0.01% and 0.005%, respectively. The combined effects of image quality and particle motion on the measurement accuracy were also investigated by measuring simple tube flows. The measured velocity profiles well agreed with the theoretical profile throughout for all the samples. Systematic observation of the measurement uncertainty gives the criteria for the use of μ-PIV and demonstrates that μ-PIV is a promising technique for measuring the velocity field information of nanofluids. This study would be helpful to validate theories and understand mechanisms about nanofluid heat transfers.

This work was supported by the Soonchunhyang University Research Fund and the Human Resources Program in Energy Technology of the Korea Institute of Energy Technology Evaluation and Planning (KETEP), which was granted financial resources from the Ministry of Trade, Industry & Energy, Republic of Korea [grant number 20194030202410]. 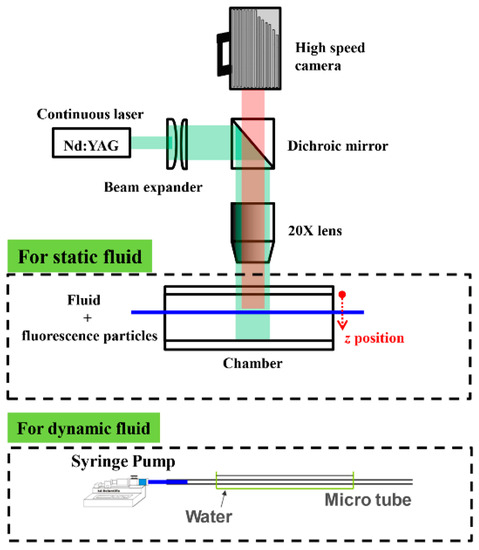 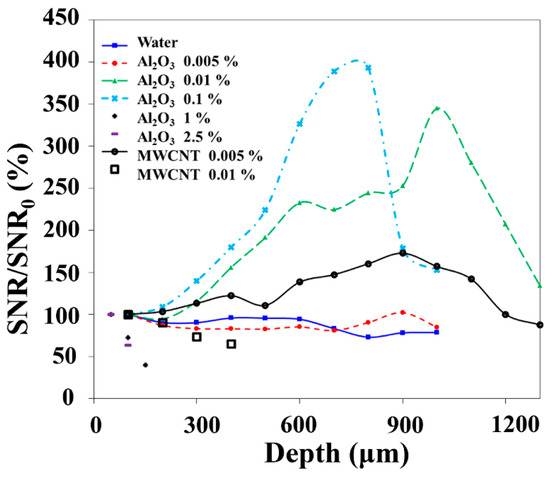