Figure 1 shows a schematic of the low-temperature, high-pressure triaxial apparatus used for the in-situ synthesis and mechanical property testing of self-developed hydrate sediments. The axial loading pressure ranged from 0–250 kN, the adjustable loading rate was 0.001–6 mm/min, and the three-axis pressure chamber (i.e., hydrate synthesis reactor) could set the confining pressure and pore pressure, ranging from 0–30 MPa. The sample size was Ø = 50 mm × 100 mm, the system operating temperatures were −30–50 °C (±0.5 °C), and the temperature range of the triaxial pressure chamber was approximately −30–50 °C (±0.5 °C). The device was mainly composed of a reaction kettle, a film-forming sediment preparation system, a stress loading system, a temperature control system, a confining pressure loading system, and a vacuum system. The temperature and pressure data during the experiment were monitored via computer in real time. The data acquisition rate of the computer reached up to 6 times per second, which could accurately monitor the temperature and pressure changes.

The sand used in this experiment was a natural sand from the South China Sea. After screening with a 40–60 mesh sieve, deionized water was used to remove impurities, such as mud, ash, and salt. After preparation, the median grain size of the sand (d50) was found to be 377 µm, and the porosity was 33%; the grain size distribution of the sand is shown in Figure 2. The deionized water used in the experiment was made in the laboratory. The experimental clay was kaolin, for which the molecular formula is Al2Si2O9H4, and the relative molecular mass is 258.16.

2.3.1. Synthesis and Preparation of Samples

The sand used in the experiments was sieved and washed with deionized water, before being placed in an oven and allowed to stand at 104 °C for 10 h. After drying, a standardized amount of sand was placed into a plastic container, then the weighed clay was added in batches, and stirred simultaneously. After the mixture was almost uniform, the deionized water was added and stirred until the agglomerated particles were invisible. The sand–clay mixture was then left to stand under closed conditions for 24 h, so that the deionized water was evenly distributed among the sand grains. A rubber mold with a thickness of 0.8 mm was fixed to the base of the test bench, and then a water-permeable plate, a stainless steel metal mesh, and a fast filter paper were sequentially placed at the bottom. The metal mold was fixed outside of the rubber mold with a rubber band. The prepared sand sample was layered into the mold and compacted by a compactor. The filter paper, metal mesh, and water-permeable plate were then placed in the upper layer of the sand sample in-turn. Next, a two-way air intake cover was installed, and the sample was evacuated by a pump to detect the airtightness of the device. Afterward, the metal mold was removed and finally, the pressure chamber was closed with screws.
Water was injected into the confining pressure chamber, which slowly increased the pressure in the chamber via the booster pump, and simultaneously introduced methane gas into the sample chamber by means of the upper and lower two-way air intakes. This ensured the entire supercharging process. The pressure was always higher in the pressure chamber than in the sample chamber (i.e., the confining pressure was ~1.5–2.0 MPa higher than the pore pressure). Finally, the confining pressure was increased to 10 MPa, and the pore pressure was stopped at 9.0 MPa. The methane gas source was turned off, the sample chamber was connected to the buffer tank, the temperature of the system was maintained at 20 °C by a circulating water bath, and the sample was allowed to stand for 24 h to allow for sufficient inhalation. Thereafter, the temperature was adjusted to 5.0 °C for 48 h, before finally being adjusted to 2.0 °C for 48 h. The pore pressure of the sample was observed to judge whether or not the hydrate was completely formed.
After the hydrate had completely formed, the valve connected to the buffer tank in the sample chamber was closed. Low-temperature deionized water at ~2 °C was injected into the sample from the bottom of the sample chamber by a syringe pump, thereby draining the excess methane gas in the experiment, and changing the sample from a gas-saturated state to a water-saturated state. The remaining amount of free gas in the sample was judged by observing the gas–liquid separator at the bottom as the liquid content when the water discharge rate in the gas–liquid separator was essentially the same as the injection rate of the injection pump, and the volume of deionized water was used. When the pore volume of the sample had approximately doubled, the free gas was completely driven off by deionized water. In the process of water flooding, it was necessary to ensure that the pore pressure was lower than the experimentally required pore pressure of ~2.0 MPa, and that the pressure of the deionized water in the syringe pump was higher than the experimentally required pore pressure of ~1.0 MPa, but lower than the confining pressure. There was a pressure difference between the deionized water and the sample, such that the deionized water could be injected directly. After the water flooding process was completed, the pressure of the sample was increased using the syringe pump to the pressure required for the experiment, and the temperature was raised to 6.0 °C for the shear test.

2.3.2. Shearing and Decompression of Samples

Figure 7 shows the volumetric strain curves for sediments with different clay proportions. It can be seen that in the first stage of shearing (i.e., when the axial strain rate was 0–2.2%), the volume of all hydrate sediment samples slightly increased as the strain rate increased and the magnitude of the change was maintained at ~0.5. The reason for this may be that in the first stage, the pore pressure of the experiment was always maintained at 8.0 MPa, which is higher than the equilibrium pressure of the phase, and the hydrate was hardly decomposed. Thus, the relationship between the hydrate and the sediment skeleton did not have much of an influence. This caused the hydrate sediment skeleton to not undergo much deformation. Additionally, the effective confining pressure at this stage was always 2.0 MPa, and such a pressure condition was not enough to destroy the particles of the hydrate sediment. Therefore, the interaction between the particles and the relative position did not change much, which resulted in there being no significant change in the volume of the entire hydrate sediment sample.
In the second and third stages of the experiments, the axial strain rates were 2.2–4.7% and 4.7–15%, respectively, and the volume of hydrate sediments with different clay contents increased with the axial strain rate. With the reduction of hydrate content, an important clipping phenomenon occurred. The volumetric change in the second stage was generally >2.0%, while the shear shrinking phenomenon was more obvious in the third stage. The change in the volume of the sample with 20% clay content in the third stage even reached 5.0%. The reason for this may be that the pore pressures of the hydrate sediment samples in these two stages were lower than the phase equilibrium pressure of the hydrate at the same temperature, especially in the third stage. Thus, during the shearing process, the hydrate in the sample gradually decomposed, resulting in the formation of pores in the middle of the hydrate sediment skeleton. Under the influence of a certain effective confining pressure, some of the finer particles of clay filled the skeleton under the actions of the free water and gas generated by decomposition. Additionally, due to the large effective confining pressures in these two stages, some of the sediment particles may have been shredded. Under the external pressure, the shredded particles would have experienced larger positional changes, resulting in a change in the skeleton of the hydrate sediment sample, and ultimately in the volumetric reduction of the entire sample.
With the increase of clay content, the volumetric shearing effect of hydrate sediments became more obvious, likely because the strength of the clay was less and its compressibility was higher than that of the quartz sand. Therefore, as the clay content increased, the volume became more compressed. Figure 8 shows the grain size curve of the sediments before and after the triaxial compressive shearing of 40–60 μm specimens. It can be seen from this figure that the particle sizes before shearing were larger than afterward. This means that after shearing, the higher effective confining pressure and axial load became part of the sand. Additionally, the volume of the hydrate sediment sample suddenly declined each time the axial load pressure was unloaded during the experiment. This may have been due to the fact that these two stages comprised a process of hydrate decomposition and drainage. First, the depressurized hydrate was decomposed, and a certain amount of gas and the free water generated by decomposition were discharged, such that many pores were generated among the hydrate sediment samples. Moreover, in the process of free water and gas discharge, sand and clay also underwent substantial displacement under the movement of the free water and methane gas, which could have significantly changed the skeletal structure of hydrate sediments, especially when they were not decomposed. Finally, the sediment skeleton played a very important role in cementation, and the originally fixed skeleton was destroyed after decomposition; because of the increase in the effective confining pressure, the compression of the sample became more pronounced.

The stress–strain relationship of hydrate sediments containing clay (kaolin) during shearing is mainly divisible into three stages, namely elastic strain, plastic strain, and the strain yielding stage. In multi-stage triaxial shear tests with discontinuous depressurization, the mechanical strength varied with hydrate decomposition. With the increase of the axial strain rate under triaxial compression, all experiments showed that the elastic strain was gradually transformed into plastic strain. During the course of these experiments, the strain yielding phenomena changed, which indicates that the strain of the specimen could be restored at the beginning, but with the progressive loading of the axial load, the structure of the specimen was gradually destroyed, and the damage became irreversible.
The proportion of clay in the methane sediment affected the mechanical strength of the hydrate sediment sample. This may have been because the clay particles were smaller and could fill the pores of the coarser sediment skeleton, while the clay offered less support to the skeleton, and the hydrate more strongly cemented the skeleton with increasing clay content. As the proportion of clay increased, the strength of the entire sample gradually decreased. The clay also affected the volumetric strain during methane hydrate shearing. Regardless of the amount of clay added, the hydrate sediments shrank, but as the hydrates gradually decomposed, the shrinkage of the sediments became more pronounced as the clay content increased. The reason for this may be that the strength of the clay was less than that of the quartz sand, and the change in volume during the shearing process was greater than that of the quartz sand. As the hydrate decomposed, the pores between the quartz sand skeletons gradually increased, and the smaller clay particles filled the pores of the skeleton under the external shearing force, thereby causing the shearing behavior observed. 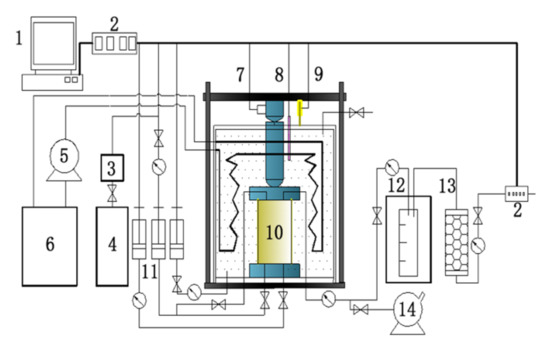 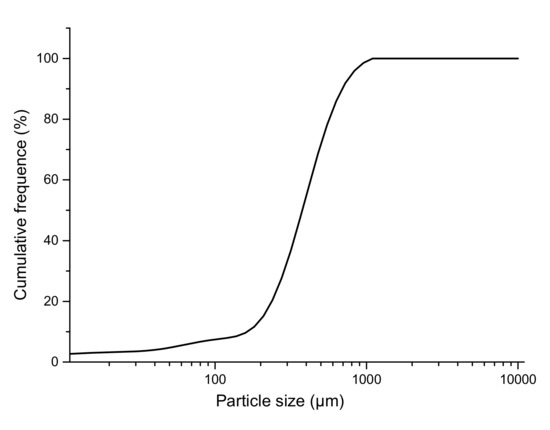 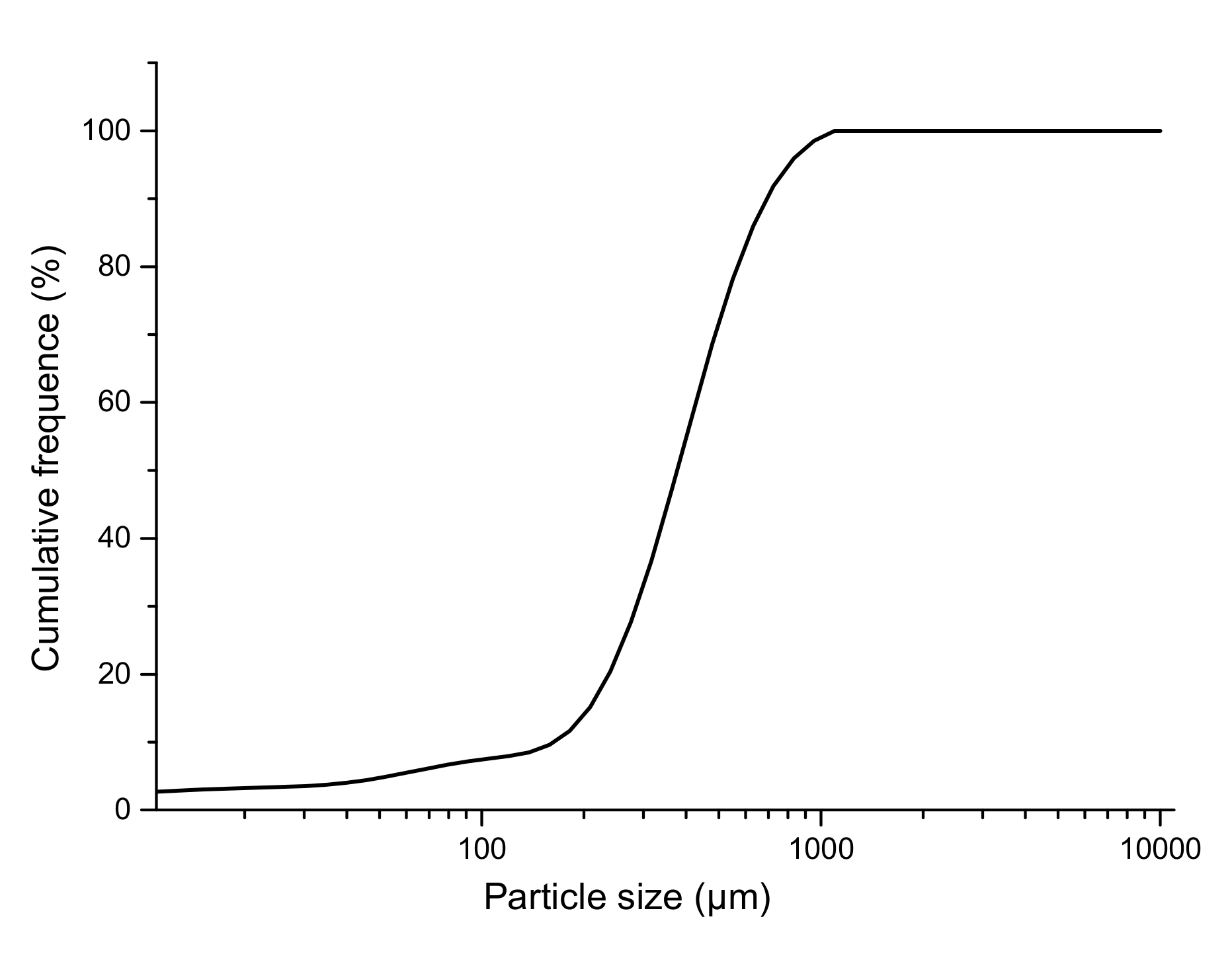 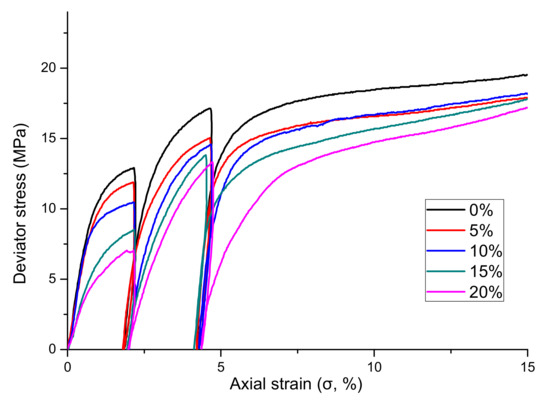 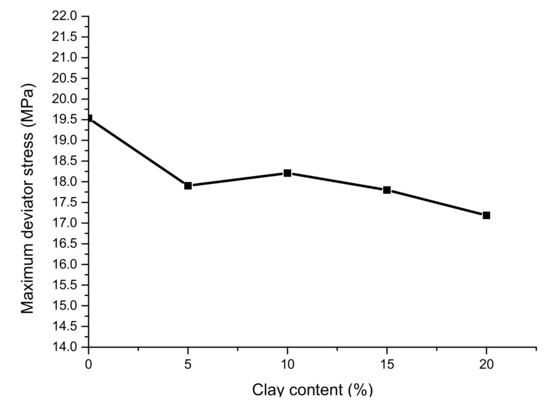 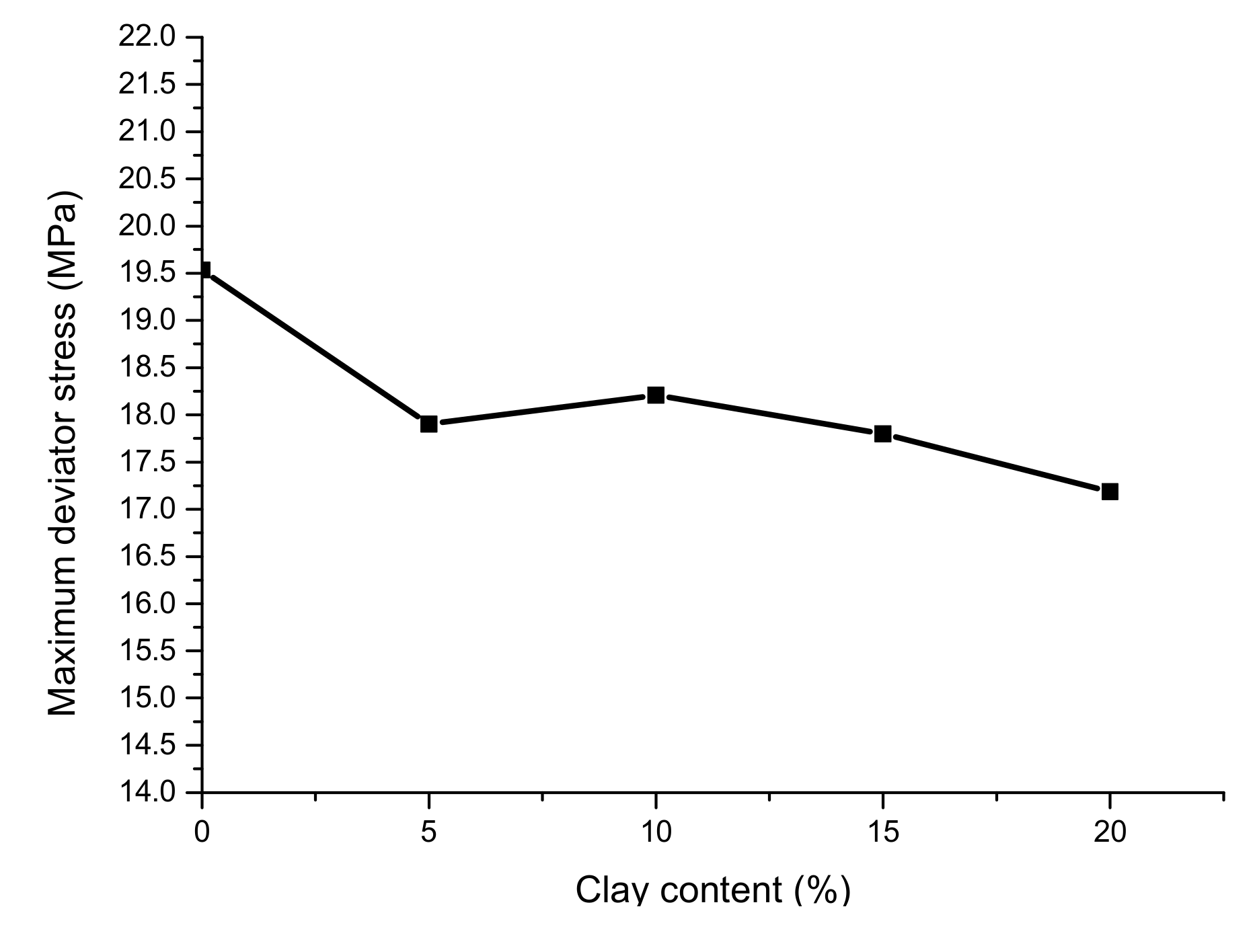 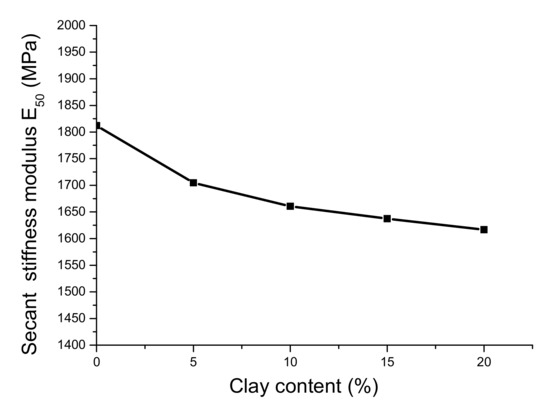 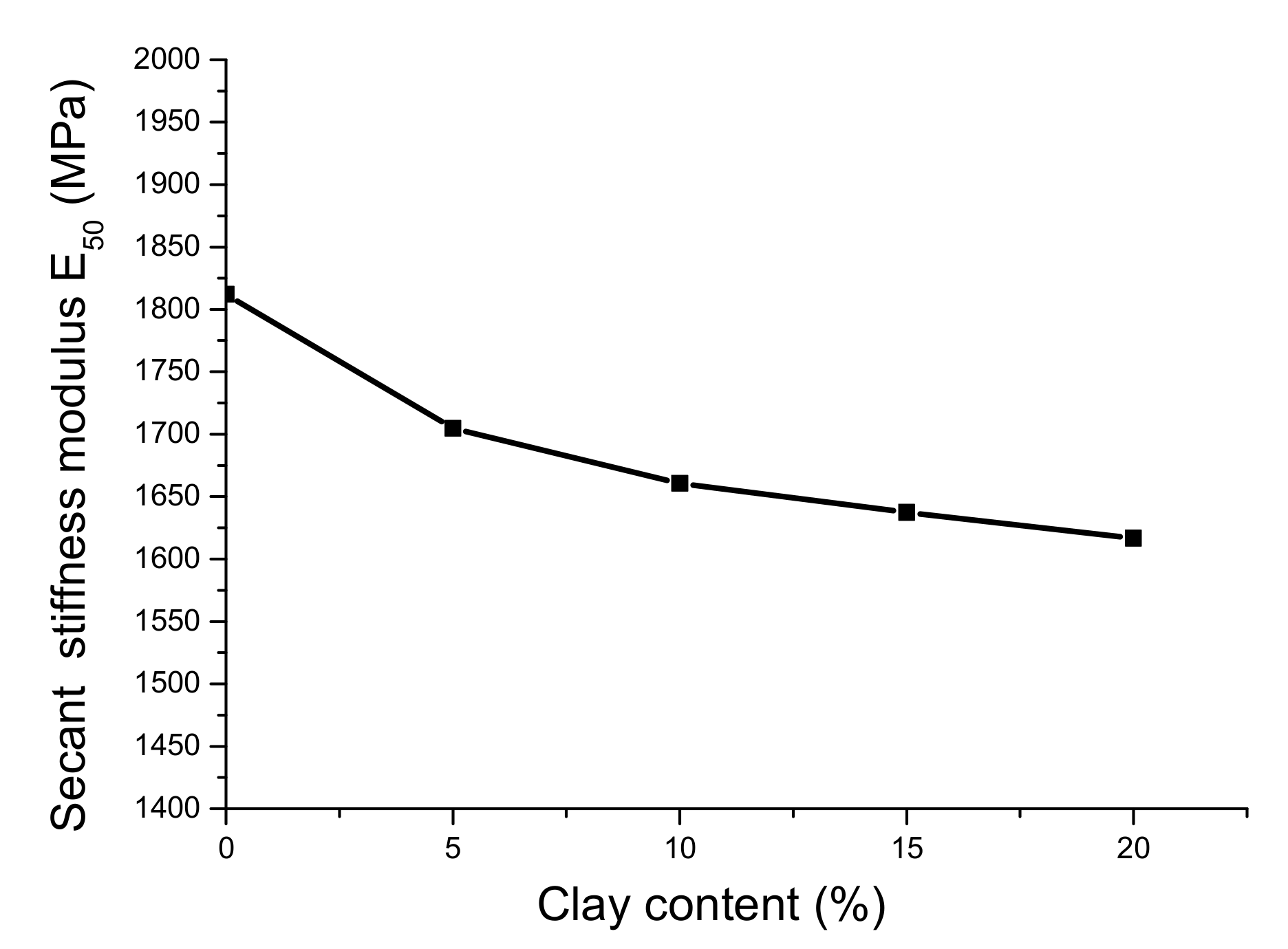 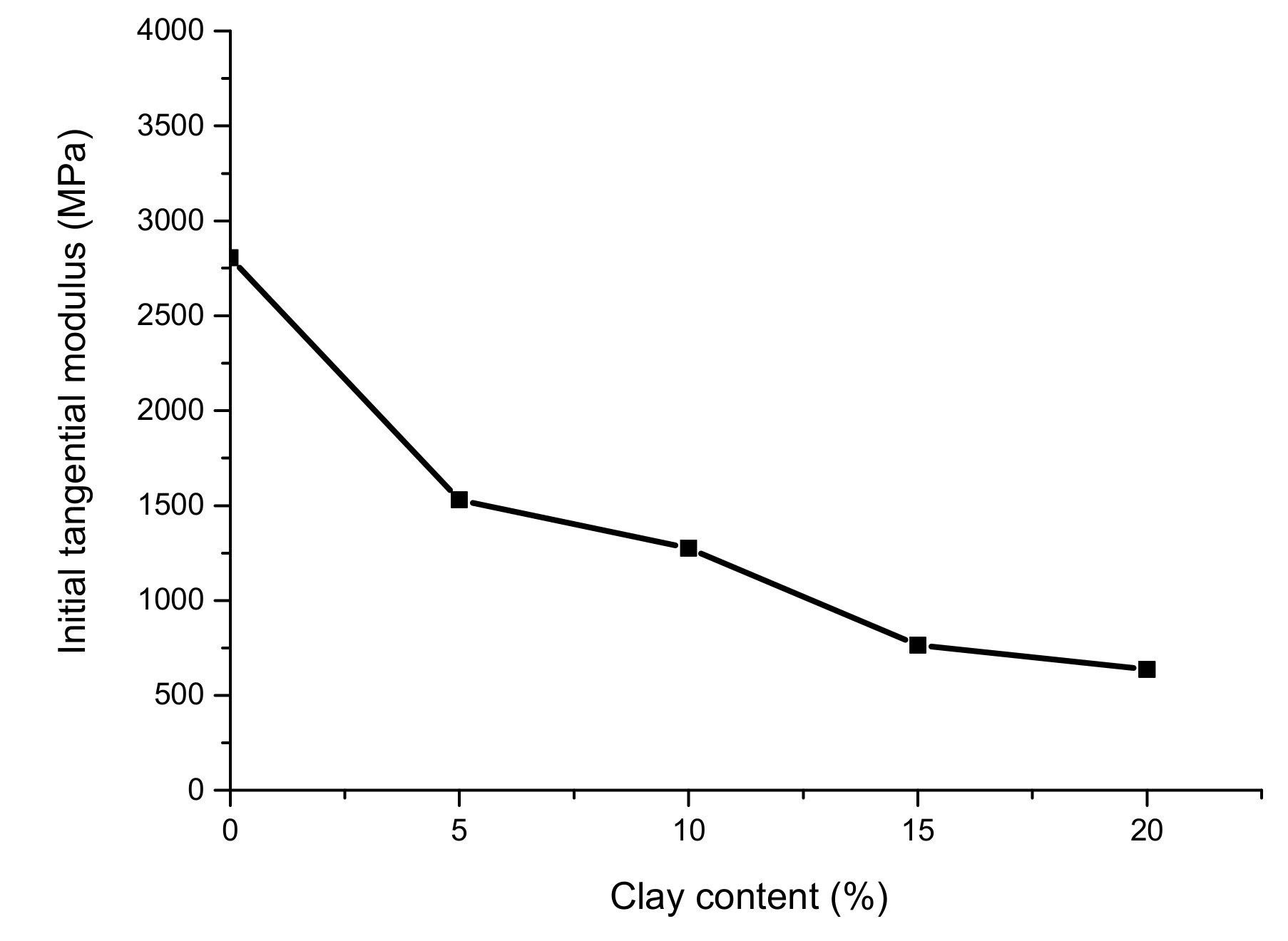 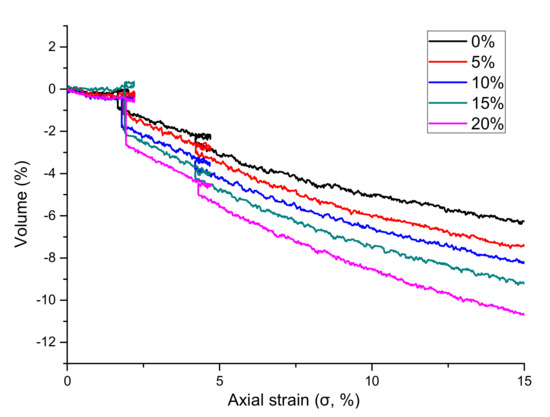 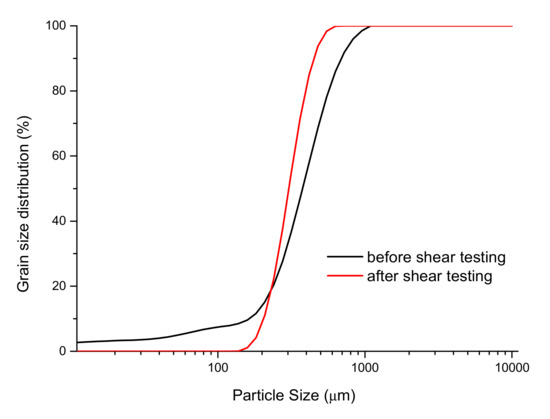 Table 1. Sample parameters for shear experiments (Nos. 1–5).
Table 1. Sample parameters for shear experiments (Nos. 1–5).
© 2019 by the authors. Licensee MDPI, Basel, Switzerland. This article is an open access article distributed under the terms and conditions of the Creative Commons Attribution (CC BY) license (http://creativecommons.org/licenses/by/4.0/).
We use cookies on our website to ensure you get the best experience. Read more about our cookies here.
Accept
We have just recently launched a new version of our website. Help us to further improve by taking part in this short 5 minute survey here. here.
Never show this again