Impact of Sampling Technique on the Performance of Surrogate Models Generated with Artificial Neural Network (ANN): A Case Study for a Natural Gas Stabilization Unit

Large-scale wind turbines with a large blade radius rotates under fluctuating conditions depending on the blade position. The wind speed is maximum in the highest point when the blade in the upward position and minimum in the lowest point when the blade in the downward position. The spatial distribution of wind speed, which is known as the wind shear, leads to periodic fluctuations in the turbine rotor, which causes fluctuations in the generator output voltage and power. In addition, the turbine torque is affected by other factors such as tower shadow and turbine inertia. The space between the blade and tower, the tower diameter, and the blade diameter are very critical design factors that should be considered to reduce the output power fluctuations of a wind turbine generator. To model realistic characteristics while considering the critical factors of a wind turbine system, a wind turbine model is implemented using a squirrel-cage induction motor. Since the wind speed is the most important factor in modeling the aerodynamics of wind turbine, an accurate measurement or estimation is essential to have a valid model. This paper estimates the average wind speed, instead of measuring, from the generator power and rotating speed and models the turbine’s aerodynamics, including tower shadow and wind shear components, without having to measure the wind speed at any height. The proposed algorithm overcomes the errors of measuring wind speed in single or multiple locations by estimating the wind speed with estimation error less than 2%. View Full-Text
Keywords: Doubly-fed Induction Generator (DFIG); wind speed estimation; tower shadow; wind shear Doubly-fed Induction Generator (DFIG); wind speed estimation; tower shadow; wind shear
►▼ Show Figures 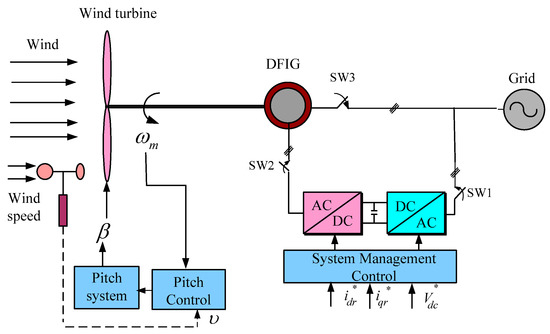