Total Cost of Ownership Based Economic Analysis of Diesel, CNG and Electric Bus Concepts for the Public Transport in Istanbul City
Previous Article in Journal

There have been several studies conducted to measure the effects of renewable energy penetration on the electric power spot price.
However, most of these studies are conducted in countries where wholesale electric power markets are mature such as Germany, France, or the United Kingdom. In these markets, the total transactions being traded on the exchange market often account for at least 40% of the whole market, of which renewable energies make up for about 30% of the energy mix (METI [30]).
However, in the case of Japan, the JEPX is still under its slow developmental stage, with approximately 12.1% of the whole production volume being exchanged on it as of 2018, of which a very small contribution is from renewable energies (METI [1]). In addition, there are few disclosures on renewable energy transactions on the JEPX, which has caused difficulties in exploring the relationship between renewable energies and the JEPX spot price. This paper serves as the first work in this field in Japan and it notes that with the increased share of renewable energies, the JEPX spot price tends to drop. Of all the green energies, solar radiation shows a negative effect, with one solar radiation hour leading to a jump of several% of the JEPX spot price in our model (1) to (3). The speculation mentioned in Section 3 was confirmed that the JEPX spot price will drop when the supply of renewable energies increases. Compared with other research in the field, the results of this paper are similar in terms of the overall effect and appear to be robust. This work is deemed to be the first to measure how renewable energy generation influences the electric power spot price on the JEPX. However, because of the unavailability of data at the time of research, several proxies are used for regression estimations and analysis. Future research can be extended and well developed once all the information relating to the generation of renewable energies is published by the JEPX.

Appendix A. Production of Renewable Energies

In this study, due to the lack of information on renewable energy generation in the Japanese energy mix and the amount of renewable energy traded on the JEPX, as well as the shortage of information on the demand for electric power, proxy variables are used as a replacement for modelling and analysis.
Hydroelectric power is the conversion of energy from water accumulated from rain or snow into electricity, using a system of tanks and dams. Hydroelectric power is one of the biggest sources of energy in several countries including Japan thanks to its extremely low fixed cost and availability of inputs (rainfall/snowfall stored in rivers). Nowadays, the most widely used method for hydroelectric power generation calculation originates from the Kalman Filtering principle. where is the next day hydro power production output; F is the transition matrix; is the current day hydro power production output; is the current day coefficient matrix rainfall input; is the current day rainfall input level; is the system noise.
The calculation process is quite complicated and involves technical engineering, but basically, it is concluded that the hydropower production output of one day is dependent on the rainfall input of the day before. We assume the hydroelectric power production H in this paper as: is the efficiency of the hydropower production and r is the one day before rainfall.
Solar power is the conversion of energy from solar radiation into electricity directly through photovoltaic (PV), or indirectly through solar power concentrated on lenses, mirrors, or a tracking system. In order to estimate the solar power production output S, the following formula is globally accepted:where E is solar power to be generated (kWh); A is the total solar panel area (m); r is the solar panel yield or efficiency (%); H is the annual average solar radiation on tilted panels; is the performance ratio, the coefficient for losses (ranging between 0.5 and 0.9, usually it is set at 0.75 for calculation purposes). Following the formula, the real-time solar radiation has a linear relationship with the solar power to be generated. We assume the solar power production S in this paper as: is the efficiency of the solar power production and s is the current day solar radiation hours.
Wind power is the conversion of air flow (wind velocity) into electricity using installed turbines. There have been several complicated calculations and equations for wind power generation. The first method is based on Betz’s theory which was developed by the German engineer, Albert Betz in the beginning of the 20th century. The equation for wind power (W) is as follows:where P denotes wind power generation (kWh); denotes air density in kg/m; A denotes rotor swept area (m); denotes coefficient of performance; V denotes wind velocity (m/s); denotes generator efficiency; denotes gear box bearing efficiency.
Of all the factors, wind velocity or wind speed is considered to be the main one affecting the generation of wind power. Wind speed is taken in cubic form as per the formula. We assume the wind power production W in this paper as: is the efficiency of the wind power production and is the cubic form of the current day wind speed.
So, the production of all renewable energies is assumed as: 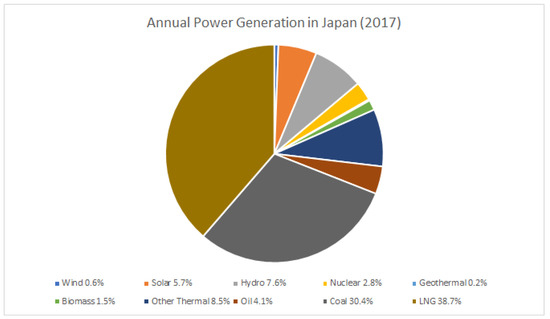 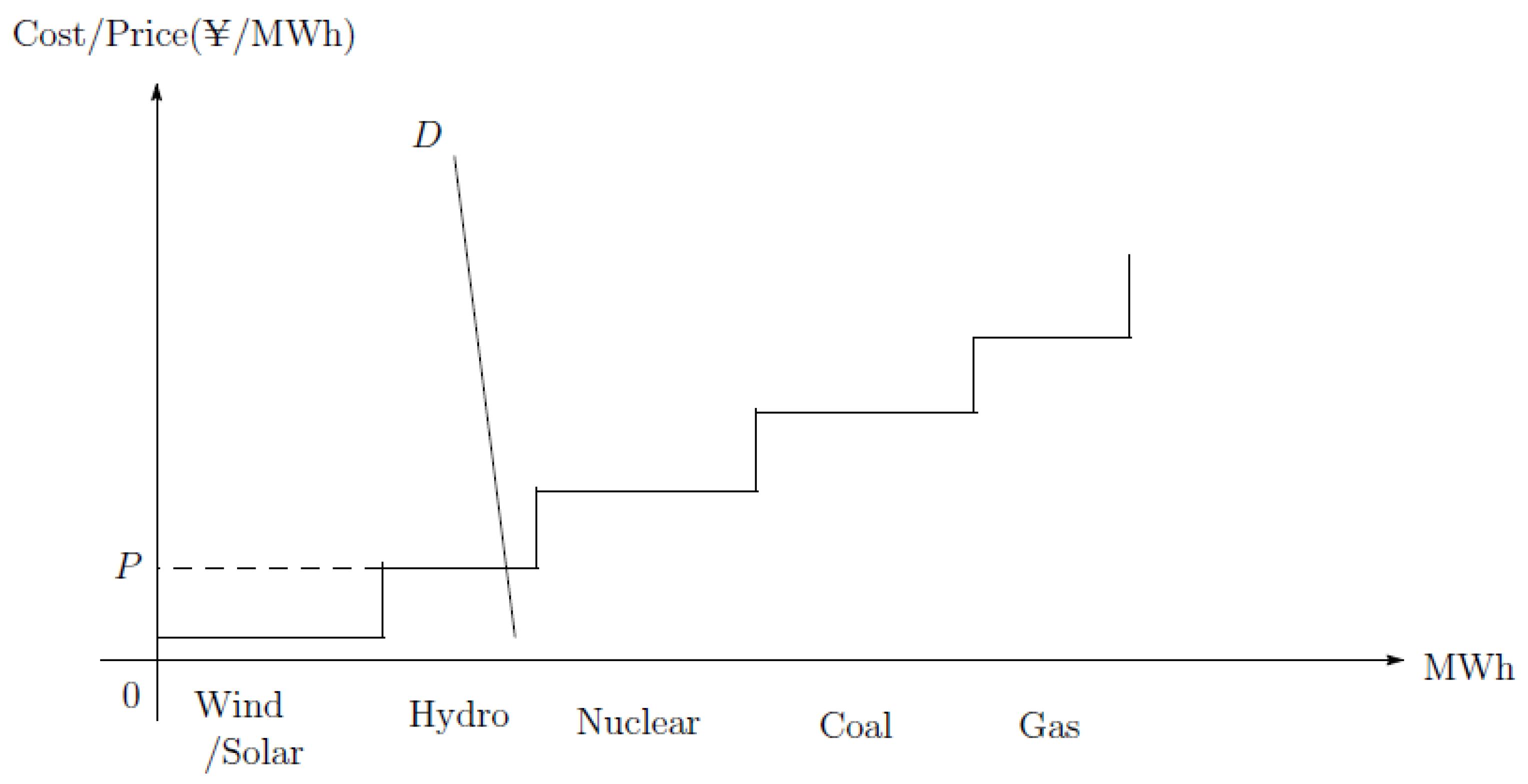 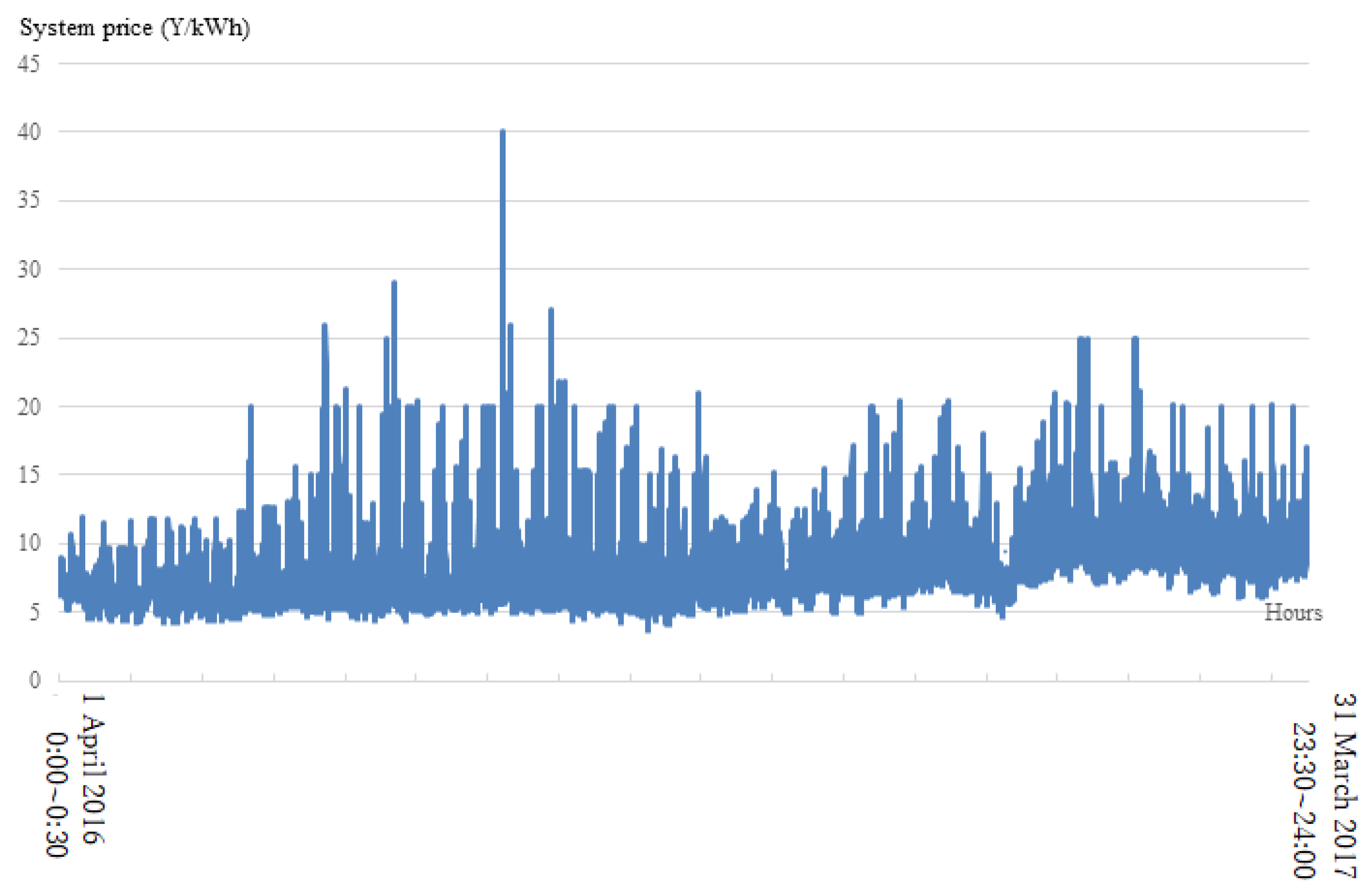 Table 3. Result of the empirical model.
Table 3. Result of the empirical model.
* Statistically significant at 1% level.
© 2018 by the authors. Licensee MDPI, Basel, Switzerland. This article is an open access article distributed under the terms and conditions of the Creative Commons Attribution (CC BY) license (http://creativecommons.org/licenses/by/4.0/).
We use cookies on our website to ensure you get the best experience. Read more about our cookies here.
Accept
We have just recently launched a new version of our website. Help us to further improve by taking part in this short 5 minute survey here. here.
Never show this again