Self-consumption energy facilities are presented as viable and sustainable solutions in the energy transition scenario in which many countries are immersed. However, they rely on dispersed and private investments in the territory. Given the uneven growth in the number of self-consumption facilities in Europe, the main objective of this study is to identify and measure the investment determinants in self-consumption facilities. To this end, the main influential incentives and barriers are identified through the aggregate analysis of the regulatory framework for self-consumption in several European countries, and the empirical characterization of Spanish facilities as a multiple case study, to define the common features of the investments made. The technical, economic, and financial characterization of real self-consumption facilities in climatic zones of southern Europe is a significant contribution of the present work. There are few samples of this type in the studies published to date, which have mainly been prepared from case studies or statistical data without identifying particular facilities. Cost-related variables have been identified as the most important variables in private investment decisions, and potential influential factors on these variables that could be regulated have been pointed out as relevant. It is also worth highlighting the elaboration of an analytical framework based on this conceptual approach, which has been proven to be useful to depict regulatory scenarios and to compare the positioning for the development of self-consumption systems in different countries. A model that transfers the influence of the determining factors to the deployment of self-consumption under specific regulatory scenarios has been developed and applied to the case of Spain. As a general reflection, to increase the adoption of this kind of technology and encourage consumers to make private investments, policies for renewable energy must consider self-consumption and microgeneration as the main axis, by increasing the availability of energy when necessary. For instance, the promotion of energy storage from these kinds of facilities could receive priority treatment, as well as rewarding the electricity surplus in the interests of security of supply in a period of energy transition towards a new, more sustainable model. Incentive schemes, aids to compensate for the additional costs resulting from the battery storage or easing restrictions in terms of contracted power would foreseeably increase the rates of adoption of the technology, favoring its faster development in terms of research and development and product innovation. View Full-Text
Keywords: self-consumption; solar energy; investments; remuneration policies; prosumers; drivers and barriers self-consumption; solar energy; investments; remuneration policies; prosumers; drivers and barriers
►▼ Show Figures 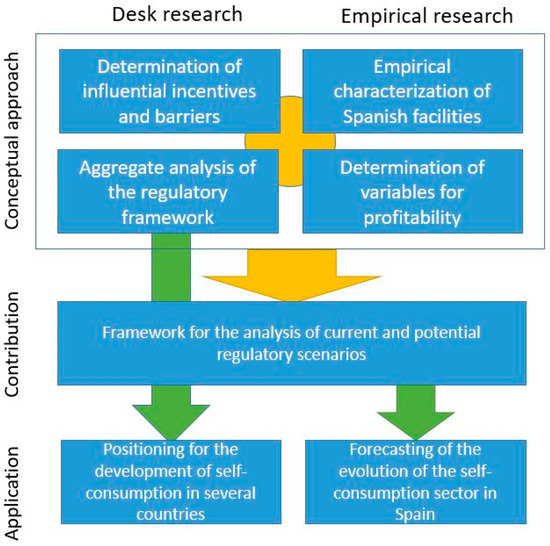