Possible Interactions and Interferences of Copper, Chromium, and Arsenic during the Gasification of Contaminated Waste Wood

1
Department of Chemical and Biological Engineering, University of Ottawa, Ottawa, ON K1N 6N5, Canada
2
Natural Resources Canada, CanmetENERGY-Ottawa, Ottawa, ON K1A 1M1, Canada
*
Author to whom correspondence should be addressed.
†
This article was produced under a collaboration between staff at the University of Ottawa and staff at CanmetENERGY, Ottawa, a laboratory of the Government of Canada. Canadian law provides for the Crown to retain copyright to materials produced by its employees in the course of their work. The Crown is a co-owner of the copyright of this paper.
Energies 2018, 11(8), 1967; https://doi.org/10.3390/en11081967
Received: 7 June 2018 / Revised: 10 July 2018 / Accepted: 23 July 2018 / Published: 28 July 2018
(This article belongs to the Section Energy Fundamentals and Conversion)
View Full-Text Download PDF
Browse Figures

Reduced order models (ROMs) are increasingly applied to entrained flow gasification development due to reduced computational requirements relative to computational fluid dynamics (CFD) models. However, they require greater a posteriori knowledge of the reactor physics. A significant parameter influencing ROM outputs is the jet half-angle of the solid fuel and oxidant mixture in the gasifier. Thus, it is important to understand the geometry of the jet in the gasifier, and how it is dependent on operating parameters, such as solid and carrier gas flow rates. In this work, an existing model for jet half-angles, which considers the ratio of surrounding gas density to jet core density, is extended to a dry solids jet with impinging gas. The model is fitted to experimental jet half-angles. The jet half-angle of a non-reactive flow was measured using laser-sheet imaging for solid fluxes in the range of 460–880 kg/m2·s and carrier gas fluxes in the range of 43–90 kg/m2·s at the transport line outlet. Jet half-angles ranged from 5.6° to 11.3°, increasing with lower solid/gas loading ratios. CFD simulations of two reactive conditions, with solid and gas fluxes similar to experiments, were used to test the applicability of the proposed jet half-angle model. View Full-Text
Keywords: jet half-angle; gasification; imaging; modelling jet half-angle; gasification; imaging; modelling
►▼ Show Figures 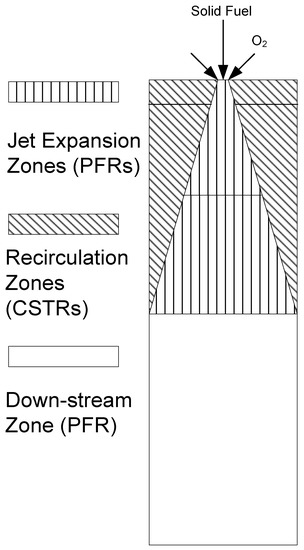