After the accession to the European Union (EU), the Republic of Croatia has assumed the obligation of increasing the use of energy from renewable sources. Based on Directive 2009/28/EE on the promotion of the use of energy from renewable sources [1], in 2020, the proportion of energy from renewable sources in terms of gross final consumption at the EU level should account for at least 20 percent [2].
The Government of the Republic of Croatia is committed to encouraging investments in research, development, and the application of technologies for the utilization of energy from renewable sources (RES) in all types of plants. According to the National energy strategy (2009), incentives were provided for energy generated by wind power plants. The share of wind generated energy in the total consumption of electricity in Croatia will eventually amount to between 9% and 10% in 2020 [3]. The incentive system for investments in renewable sources of energy is based on the model of feed-in tariffs guaranteeing the purchase of all electricity produced during certain time periods at prices higher than market prices. The incentive program has shown itself as particularly effective in achieving the goal of increasing the production of electricity from wind power plants. Indeed, according to data from the Croatian Energy Regulatory Agency (HERA) [4], in 2016 the share of electricity produced from wind power plants in Croatia with respect to total electricity produced was 8.85%.
The use of renewable sources of energy has numerous social and economic advantages. RES application reduces harmful emissions, such as CO2, and plays a significant role in the protection of the environment. RES deployment also induces positive economic effects on other domestic sectors included in the RES value added chain. Economics literature provides a broad scope of methods for evaluating the total effects of renewable sources of energy on the rest of the economy as presented in the short literature review in the next section. The approach most frequently applied in the macroeconomic analysis of the role of direct, indirect and induced effects of renewable sources of energy in the national economy is the input-output analysis. Despite numerous analytical possibilities of the input-output analysis, the issue of the economic effects of wind power plant deployment on the Croatian economy has not been previously explored. The contribution of this research is reflected in the evaluation of the total economic effects of the deployment and operation of wind power plants in Croatia for the first time. These effects are expressed in terms of employment and gross value added (GVA) as the most important indicators of economic performance and competitiveness.
This paper is organized in a number of sections. The introduction is followed by an overview of the literature on the total effects of wind power plants on the national economy. Section 3 describes the research methodology and data sources used in the study, while Section 4 presents the empirical results of the total effects of constructing and operating wind power plants on the economic activities in Croatia. Section 5 discusses the results in the context of previous findings. Finally, the conclusion presents an outline of policy implications as well as recommendations for further research.

With the aim of achieving the strategic goals of reducing environmental pollution from the emission of CO2 and other pollutants, Croatia has decided to support the production of energy from renewable sources. The procedure for the entry of certain types of RES plants into the feed-in tariff scheme has been defined in 2010. Investors contract the long-term purchase of produced energy with the government agency HROTE at supported prices, which are higher than the market electricity prices. The feed-in tariffs scheme has led to significant positive results, achieving the goal of a 10% share of energy produced from new RES plants included in the scheme a few years before the planned deadline in 2020.
The research in this paper focuses on quantification of the indirect and induced economic effects, resulting from the energy policy measures that support wind power plant deployment. Incentivizing investments in wind power plants contributes positively to the economic activity of equipment suppliers and also related contractors, installing, and maintaining such equipment. Increasing activity of producers of RES equipment and intermediate inputs leads to an increase in employment and induces an additional income for the household sector, in support of previous research findings. The production of wind turbines and other equipment necessary for wind power plants is not yet developed in Croatia. The novelty of this research primarily relates to the finding that even economies that are oriented towards "foreign" technology in the deployment of wind power plants recorded socioeconomic benefits effects if indirect and induced effects are included. Total effects are somewhat less compared to the results from recent research, which is generally focused on industrially developed countries. However, Croatian producers participate in equipping power plants, especially with services for installation, construction works, transport, and other supporting services.
In the period of intensive investments in wind power plant deployment, their effect on overall employment in the Croatian economy accounted for more than 4000 persons. The planned quota for applying the system of feed-in tariffs for energy produced in wind power plants was fulfilled significantly before the planned deadline and investment activity has recently decreased. Therefore, the economic effects in the recent period include the effects in the intermediate consumption channel, which continue to be important and contribute to employing almost 2500 people annually. However, the input-output approach has some limitations regarding the stability of technical coefficients and import contents. When a more up-to-date input-output table for the Croatian economy becomes available, future research will focus on testing the robustness of the results.
The new energy strategy of the Republic of Croatia for the future long-term period is currently being developed in 2018, but it is widely expected that the share of RES energy will increase further. If the industrial policy measures are better linked to the energy strategy, the inclusion of domestic producers in the overall value added chain of particular components for the equipment may well increase. As a result, the total effects of wind power plant deployment in the future may become even more significant. 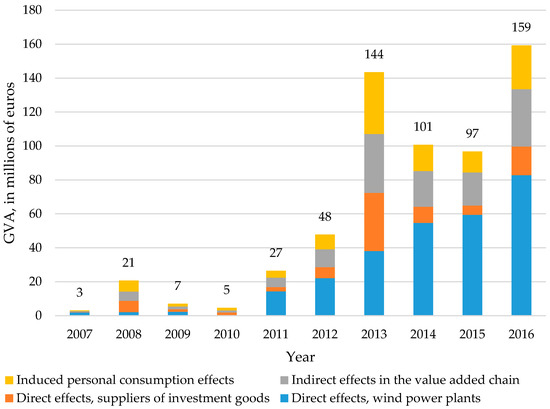 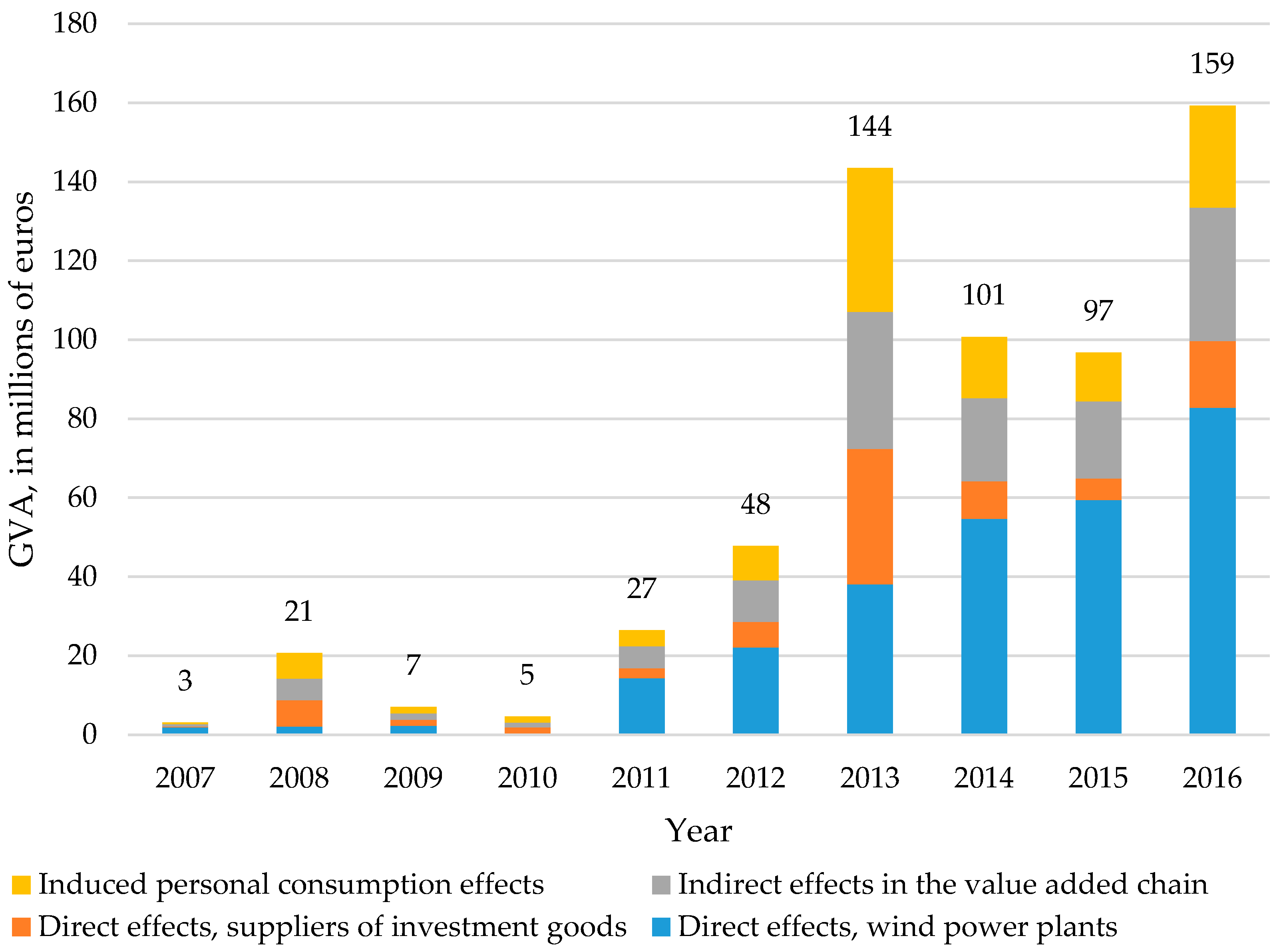 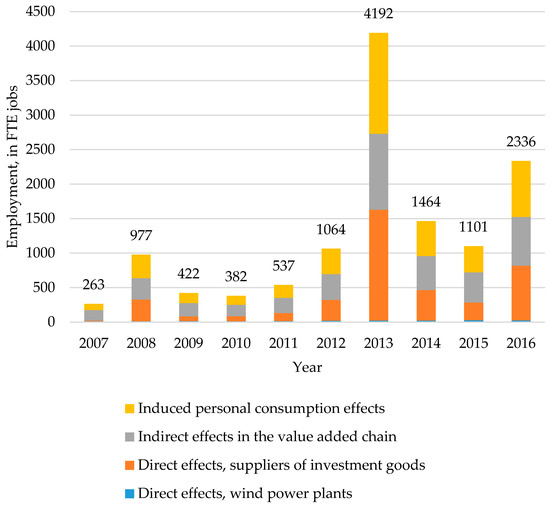 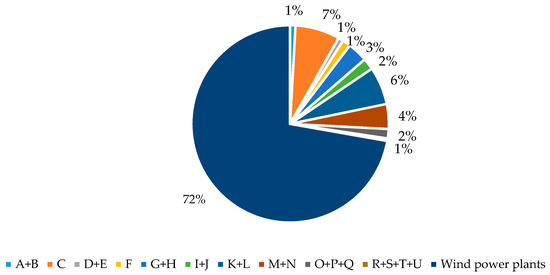