Spatial Distribution of the Baltic Sea Near-Shore Wave Power Potential along the Coast of Klaipėda, Lithuania

Researchers are in search of parameters inside Li-ion batteries that can be utilized to control their external behavior. Physics-based electrochemical model could bridge the gap between Li+ transportation and distribution inside battery and battery performance outside. In this paper, two commercially available Li-ion anode materials: graphite and Lithium titanate (Li4Ti5O12 or LTO) were selected and a physics-based electrochemical model was developed based on half-cell assembly and testing. It is found that LTO has a smaller diffusion coefficient (Ds) than graphite, which causes a larger overpotential, leading to a smaller capacity utilization and, correspondingly, a shorter duration of constant current charge or discharge. However, in large current applications, LTO performs better than graphite because its effective particle radius decreases with increasing current, leading to enhanced diffusion. In addition, LTO has a higher activation overpotential in its side reactions; its degradation rate is expected to be much smaller than graphite, indicating a longer life span. View Full-Text
Keywords: Li-ion battery; anode materials; half-cell modeling Li-ion battery; anode materials; half-cell modeling
►▼ Show Figures 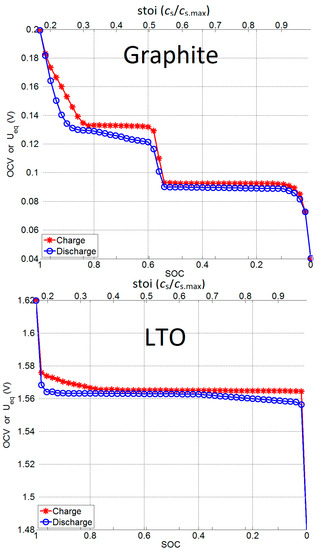