The exploitation of technologies with which to harness the energy from ocean currents will have considerable possibilities in the future thanks to their enormous potential for electricity production and their high predictability. In this respect, the development of methodologies for the economic viability of these technologies is fundamental to the attainment of a consistent quantification of their costs and the discovery of their economic viability, while simultaneously attracting investment in these technologies. This paper presents a methodology with which to determine the economic viability of tidal energy projects, which includes a technical study of the life-cycle costs into which the development of a tidal farm can be decomposed: concept and definition, design and development, manufacturing, installation, operation and maintenance and dismantling. These cost structures are additionally subdivided by considering their sub-costs and bearing in mind the main components of the tidal farm: the nacelle, the supporting tidal energy converter structure and the export power system. Furthermore, a technical study is developed in order to obtain an estimation of the annual energy produced (and, consequently, the incomes generated if the electric tariff is known) by considering its principal attributes: the characteristics of the current, the ability of the device to capture energy and its ability to convert and export the energy. The methodology has been applied (together with a sensibility analysis) to the particular case of a farm composed of first generation tidal energy converters in one of the Channel Island Races, the Alderney Race, in the U.K., and the results have been attained by means of the computation of engineering indexes, such as the net present value, the internal rate of return, the discounted payback period and the levelized cost of energy, which indicate that the proposed project is economically viable for all the case studies. View Full-Text
Keywords: renewable energy; marine currents; tidal energy; economic viability; cost assessment; life-cycle costs renewable energy; marine currents; tidal energy; economic viability; cost assessment; life-cycle costs
►▼ Show Figures 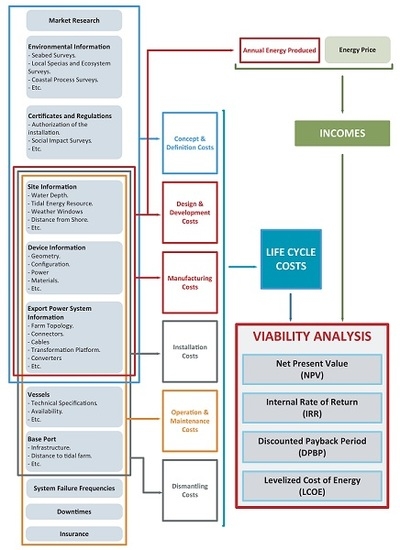