Analyzing social systems, particularly financial markets, using a complex network approach has become one of the most popular fields within econophysics. A similar trend is currently appearing within the econometrics and finance communities, as well. In this study, we present a state-of-the-artmethod for analyzing the structure and risk within stockmarkets, treating them as complex networks using model-free, nonlinear dependency measures based on information theory. This study is the first network analysis of the stockmarket in Shanghai using a nonlinear network methodology. Further, it is often assumed that markets outside the United States and Western Europe are inherently riskier. We find that the Chinese stock market is not structurally risky, contradicting this popular opinion. We use partial mutual information to create filtered networks representing the Shanghai stock exchange, comparing them to networks based on Pearson’s correlation. Consequently, we discuss the structure and characteristics of both the presented methods and the Shanghai stock exchange. This paper provides an insight into the cutting edge methodology designed for analyzing complex financial networks, as well as analyzing the structure of the market in Shanghai and, as such, is of interest to both researchers and financial analysts.
Keywords: dependency networks; financial markets; complex systems; mutual information dependency networks; financial markets; complex systems; mutual information

To apply networks based on correlation, mutual information and partial mutual information in the reality of the Shanghai Stock Exchange, so as to find their properties and the characteristics of the market itself, we have obtained daily log returns for 158 stocks belonging to the Shanghai Stock Exchange, as well as the index of this market (SSE Composite Index). The data on prices cover 1288 days between the 5 January 2009 and the 30 April 2014 and have been obtained from the Yahoo! Finance database. The choice of this particular period is motivated by two ways. First, we want to comment on the current state of the market in Shanghai, and thus, we take the data after the turmoil of the worldwide crisis of 2008. Second, we want the data to be sufficiently long, as mutual information does not work well for very short time series, but we also want the data not to be very long, so as not to lose economic homogeneity. The time series describing daily closing prices are transformed in the standard way for analyzing price movements, which is so that the data points are the log ratios between consecutive daily closing prices: , and those data points are, for the purpose of the mutual information estimator, discretized into four distinct states through the common procedure of binning into quantiles. The choice of the number of bins, as well as the discussion of the whole procedure can be found in [71]; here, we only note that the results are robust with regards to the choice of the number of quantiles. Additionally, the 158 stocks are divided into 10 sectors and 34 subsectors according to Bloomberg. Bloomberg has also provided the latest earnings per share ratios for all studied stocks.
On this basis, we have created six networks. For each of the above-introduced distances, , and , we have created a minimally-spanning tree and a planar maximally-filtered graph. All of those networks are undirected, weighed graphs, where nodes denote stocks and links denote closeness between them (in terms of correlation or (partial) mutual information). The nodes (the stocks) are assigned an economic sector and subsector according to Bloomberg’s classification, which does not affect the topology, and is only used later to compare how well the presented methods recreate sector structure from price changes alone, which is one of the main results of the general methodology [22]. Thus, we are able to comment on the different characteristics of these and, in particular, show that using partial mutual information is beneficial to the analysis, especially against the most commonly-used methodology based on Pearson’s correlation coefficient. A minimally-spanning tree based on partial mutual information is presented in Figure 1, and a planar maximally-filtered graph based on the same distance is presented in Figure 2. The most important stocks (in terms of node degree) are labeled with their tickers. These are as follows: 601588, Beijing North Star Co Ltd; 601168, Western Mining Co Ltd; and 601898, China Coal Energy Co Ltd. 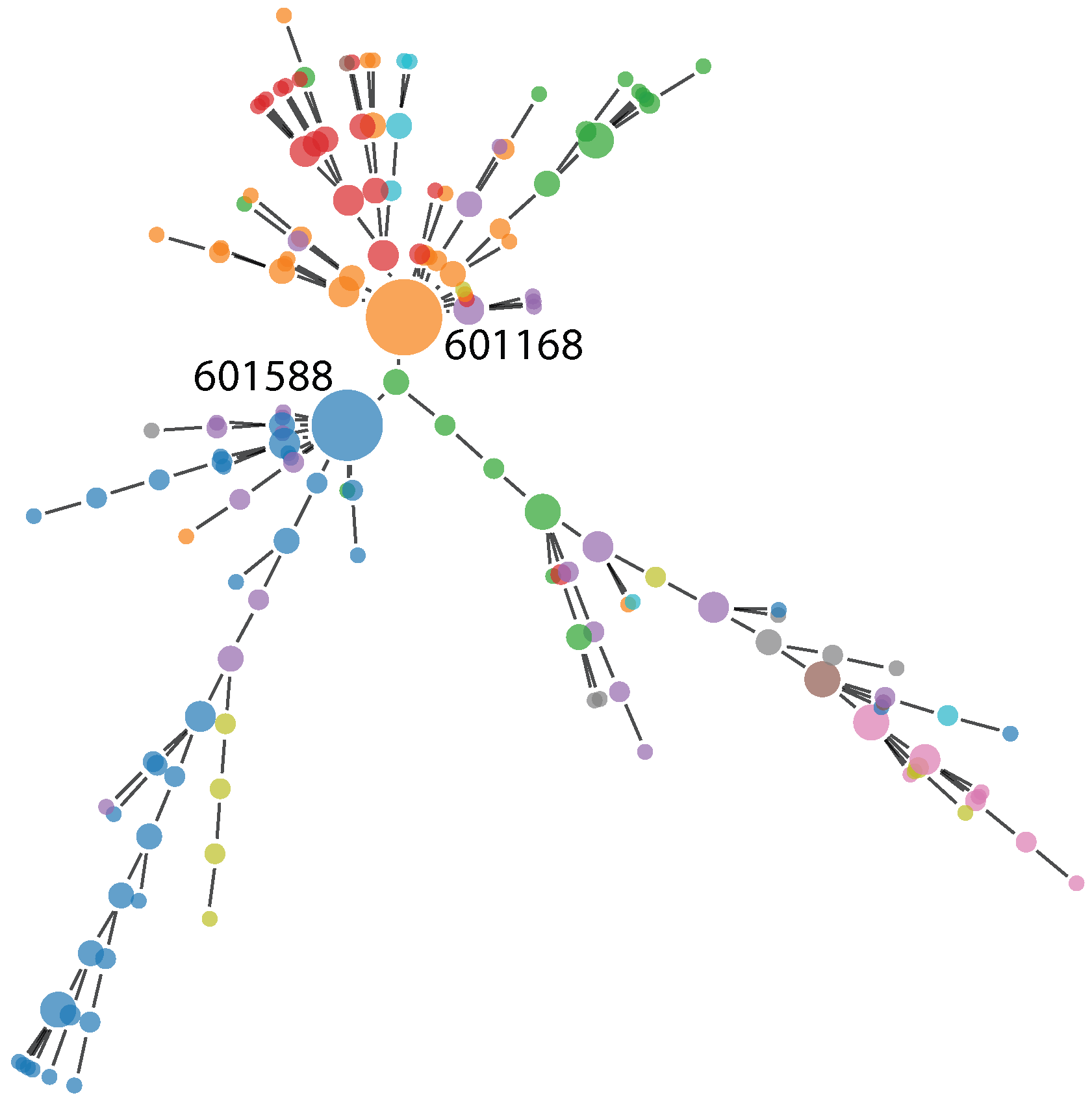 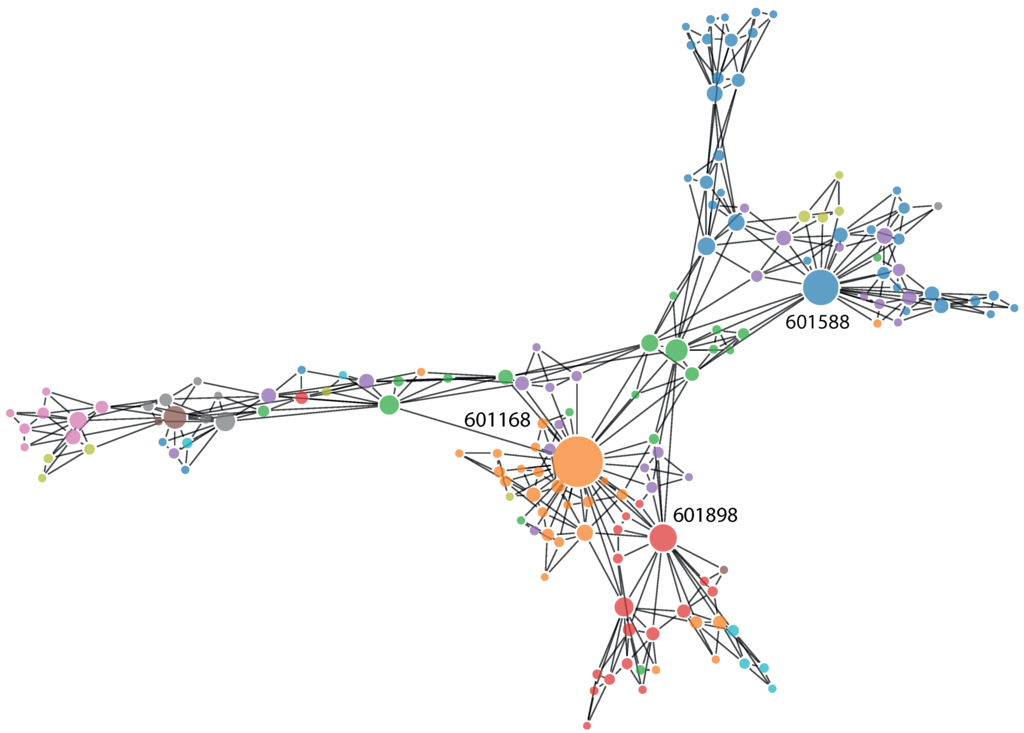 As mentioned above, both MST and PMFG show the strongest relations between assets, which create clusters based mostly on the economic sectors. This information is important, as it cannot be reproduced by simulating a virtual market [22]. Note that all nodes in the networks we have created are attributed as belonging to a specific economic sector (according to Bloomberg). As such, we may analyze how strongly the filtered graphs (MST, PMFG) are based on economic sectors. For this purpose, we calculate the ratio between the number of links between the stocks belonging to the same economic sector (according to Bloomberg) and the number of all links in the created networks. If a network were only to consist of links between stocks (nodes) belonging to the same economic sector, this ratio would be equal to 100% (in practice, this would require only one sector, as there must be (at least an indirect) link between all nodes within MST and PMFG).
Calculating the percentage of intra-sector links within the created networks allows us to see which of these networks reproduces the sector structure of the Shanghai Stock exchange from the price changes in the most accurate manner. The results are presented in Table 1. We note that it is very hard to probe the statistical significance of these results (a sample of one, as we only create one network based on each dependency measure and topology; there is not enough data to create multiple networks and test it this way), and as such, we base our conclusions mostly on the agreement between these results and results obtained in other studies, which cover different markets and analyze different years; see the discussion below. Nonetheless, we have performed a bootstrap analysis by shuffling the rows of the matrix containing log returns repeatedly without replacement in order to create a large number of surrogated time series of returns. After each shuffling, we calculate the correlation and mutual information between the original and shuffled log returns, create minimally-spanning trees on this basis and calculate the percentage of intra-sector links within these to observe how likely the results are due to pure chance. We applied this procedure a thousand times and have obtained a distribution of the percentage of intra-sector links within the networks based on surrogate data (close to being Gaussian) with a mean of 12.85% and a standard deviation of around 4% for correlation-based networks and an average of 4.18% with a standard deviation of around 1% for mutual information-based networks. These findings further increase our confidence in the results presented in Table 1. First, the obtained intra-sector link ratios are already stunningly significant at over 11 standard deviations above the mean for correlation-based networks and even more for mutual information-based networks. Second, as mentioned above, the ratio of intra-sector links is lower for networks based on mutual information than correlation (for surrogate data); thus, being the opposite for the original data makes us believe that this is due to the economic structure being unveiled by mutual information, rather than statistical noise. 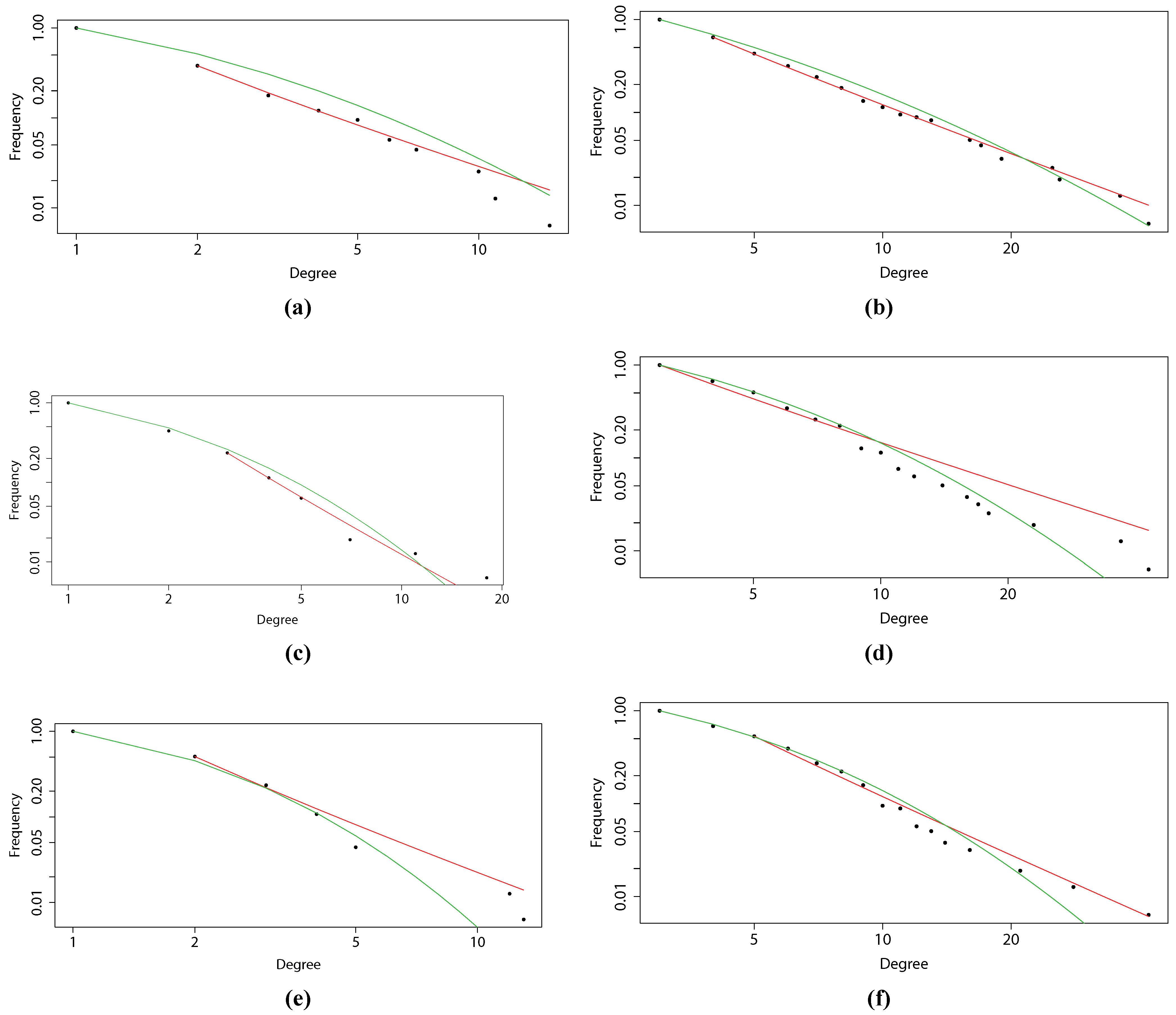 Finally, we look into how stocks with various levels of importance in the studied networks (in terms of node degree) behave economically in terms of earnings per share ratio. There is a negative correlation between node degree within the network presented in Figure 1 and the earnings per share (EPS) ratio for all studied companies, with a magnitude of around −0.1. Further, the two hubs in the networks (nodes with the largest degrees: 13 and 12) have modest EPS ratios, while all the outliers (both negative and positive) in terms of EPS are characterized by low degrees (five or less) within the studied networks. Additionally, in Table 2, we have presented the sum of the degrees for stocks in all studied sectors, the average degree for a stock in all studied sectors and the average EPS ratio in all studied sectors in MST and PMFG based on partial mutual information.

In this paper, we have presented a methodology of creating financial networks based on partial mutual information. This is different from the most common methodology based on correlation, both in allowing nonlinear interdependencies in the analysis and in accounting for the mediating influence of third parties in pairwise dependencies within financial markets. We have applied this methodology to the Shanghai Stock Exchange and found that this methodology does indeed present a better picture of the market, particularly reconstructing the sector structure of the market more precisely, while retaining the (almost) scale-free property of the networks. Finally, we have commented on the resulting picture of the Shanghai Stock Exchange. We have found that the market is quite diversified and mature, even compared with more established markets. Further research should look into other stock exchanges in China and the region. Studies should also try to enhance the methodology to present the structure of markets in an even more clear and precise manner.

All authors contributed to this paper in equal measures.