Cross-Border Venture Capital Investments: What Is the Role of Public Policy?

Our work relates to the literature supporting that the VIX also mirrors investor sentiment and, thus, contains useful information regarding future S&P500 returns. The objective of this empirical analysis is to verify if the shape of the volatility futures term structure has signaling effects regarding future equity price movements, as several investors believe. Our findings generally support the hypothesis that the VIX term structure can be employed as a contrarian market timing indicator. The empirical analysis of this study has important practical implications for financial market practitioners, as it shows that they can use the VIX futures term structure not only as a proxy of market expectations on forward volatility, but also as a stock market timing tool.
Keywords: VIX futures; volatility term structure; future equity returns; S&P500 VIX futures; volatility term structure; future equity returns; S&P500

The CBOE Futures Exchange (CFE) launched VIX futures in March 2004. For a detailed description of the VIX futures market and its trading application, see Fassas and Siriopoulos (2012). According to the contract specifications, the exchange “may list for trading up to nine near-term serial months and five months on the February quarterly cycle.” In practice, during the first two years of trading of the VIX futures contracts (until 8 March 2006), there were four contracts listed. The CFE gradually increased the listed contracts series from four to six on 9 March 2006, to seven on 24 April 2006, to nine on 23 October 2006, and finally, to ten on 22 April 2008 (this is still the number of series currently trading).
The dataset of the current analysis consists of the daily closing prices of spot VIX and the seven nearest VIX futures for the period from 4 January 2010–29 December 2017. The daily prices were retrieved from the website of the CBOE Futures Exchange. We set the beginning date of our sample in 2010, because that was the year in which the average daily volume of VIX futures began to increase significantly. According to CBOE data, the average daily volume was 4543 in 2009 (approximately at the same level compared to 2007 and 2008), while in 2010, it reached 17,430; in 2016, the average daily volume reached 238,773 contracts.
The present estimation of the VIX futures term structure (following Äijö (2008), Krylova et al. (2009), and Fassas (2012)) was conducted on each trading day by fitting a linear model of the available futures prices and spot VIX level as a function of time to maturity based on the least squares criterion using the following specification:
FVIXi,t = α + βTtMi,t + εt
in which FVIXi,t represents the price of VIX futures contract i on day t and TtMi,t is the time to maturity in days for the respective contract i on day t. Spot VIX was considered as the price for VIX futures with maturity equal to zero. Everyday t, we considered seven futures contracts and the spot VIX. The estimated VIX futures term structure was the daily estimated coefficient β.
Table 1 reports the descriptive statistics of the estimated VIX futures term structure time-series1. The estimated term structure is in units of volatility percentage points per year. Thus, the mean VIX term structure estimate of 2.32 indicates that the level of VIX futures price increases, on average, by 2.32 volatility percentage points per one-year horizon, or about 0.193 percentage points per month. A simple t-test for means and the Wilcoxon signed ranks test for medians showed that the upward-sloping term structure was statistically significant (at the 1% significance level). Therefore, on average, during the period under examination (January 2010–December 2017), the VIX futures term structure was upward-sloping, i.e., short-term VIX futures traded at lower price than long-term contracts.
However, the range of observations was relatively large, suggesting that the VIX futures term structure was considerably time varying. In fact, as shown in Figure 1, the VIX futures term structure may change considerably and turn from upward-sloping to downward-sloping, and vice versa, in a limited period of time. Furthermore, although the estimated term structure tended to be upward-sloping, there were also periods of a downward-sloping term during the time under review. For example, for the larger part of 2010 and 2011, the slope changed sign several times as stock prices experienced relatively high variability over the first two years of the bull market (which began in March 2009 and still holds).
After 2012, there were relatively limited instances of backwardation with most notable one in August 2015 (during the late summer 2015 selloff, which proved short-lived). Actually, during the last year (2017), the VIX term structure did not turn negative once, as VIX reached exceptionally low prices and remained in extremely low levels for an extended period of time. With VIX at such low levels, it is not surprising that VIX futures traded at a premium. Theoretically, when spot VIX is very low compared to its long-term average level, as was true during the 2016–2017 period, VIX futures trade at a premium because market participants expect that VIX will rise in the future. Conversely, when VIX is very high, VIX futures trade at a discount, implying that spot VIX will eventually decline to its normal levels.

3. The Relationship between the VIX Futures Term Structure and Future S&P500 Returns

The usual regression statistics for Equation (2) for all four time horizons are given in Table 2. In particular, we include the coefficient estimators and their Newey–West standard errors, the adjusted R-square, the F-statistic, and the Durbin–Watson statistic. The coefficient of negative slope (Slope−t) had a negative sign in all cases, and it was statistically significant in the three out of four time horizons under review (except the monthly horizon). This means that whenever the estimated VIX term structure took negative values (i.e., the VIX futures were in backwardation), the subsequent future return of S&P500 was positive. It is noteworthy that the Slope−t coefficient increased (in absolute terms) as the time horizon increased (−0.1687 for daily returns vs. −1.1809 for quarterly returns), indicating that the contrarian effect was stronger in the long run. On the contrary, the coefficient of the positive term structure (Slope+t) was not statistically significant in any instance, suggesting that when the VIX futures term structure was in contango (as it normally is), there was no meaningful market timing signal for S&P500 returns. Therefore, the upward-sloping VIX futures term structure cannot be associated with either subsequent market weakness or strength. This conclusion is closer to Lubnau and Todorova (2015), who argued that low implied volatility levels did not necessarily indicate complacency as Simon and Wiggins (2001) and Giot (2005) suggested. Furthermore, the coefficients of the negative slope were in all cases higher (in absolute values) than the respective coefficients of the positive slope, and these differences were statistically significant. Finally, we should note that the adjusted R-squared estimates were low and ranging from 0.01 (for daily observations) to 0.035 (for quarterly observations), but still, these results are economically significant and potentially useful, since we are talking about future returns (Drechsler and Yaron, 2010). For comparison purposes, Fassas and Papadamou (2018) reported adjusted R-squared measures regarding the predictive power of the variance premium ranging from just above 0.01–0.09, while Bollerslev et al. (2009) reported measures ranging from 0–0.04 at a monthly horizon, and Drechsler and Yaron (2010) reported an estimate of 0.03.
The results of Equation (3) (reported in Table 3) are comparable and suggest that VIX futures term structure can be used as a stock market timing tool. In particular, the lower percentiles (D1–D4, which correspond to 5–20 percentiles) coefficients were statistically significant in all cases and had statistically higher coefficients compared to the respective higher percentile coefficients (which correspond to the positive values of the VIX futures term structure, i.e., when the term structure is in contango). Similar to the results regarding Equation (2), the coefficients for the low percentiles (which corresponded to the negative values of the VIX futures term structure) increased as the time horizon increased. The R-squared estimates were also comparable with the respective estimates of Equation (2). Our empirical findings were not surprising and consistent with prior findings related to VIX and future returns (Giot 2005, Banerjee et al. 2007), which shows the existence of a significant negative volatility risk premium.
Thus, our empirical findings showed that VIX futures term structure can indeed be used as a stock market timing tool, as particularly the negative slope of the structure can be considered as a contrarian market timing indicator. This finding is consistent with Feldman et al. (2018), who showed that the VIX futures curve captures pivotal moments in the U.S. stock market. In addition, it also coincides with investors’ view that a downward-sloping VIX term structure is as an indication of an oversold market. The VIX futures term structure will ultimately flatten out, and according to the empirical history, this will happen when the stock market advances. The downward-sloping VIX futures term structure suggests that short-term volatility is relatively high compared to its long-term level and that investors expect a decrease in volatility in the future (Zhang et al. 2010). This may prove bullish for the stock market as there is an inverse relationship between VIX and S&P500 returns (usually when VIX declines, S&P500 advances).
In conclusion, the VIX term structure, besides its usefulness as a market timing signal when it is in backwardation, can also be used for constructing trading strategies that attempt to earn the term structure risk premium, when it is in contango (which is historically the case). An investor that simultaneously buys the VIX and S&P500 Index puts for the same expiration month can capture this volatility premium. At expiration, the prices of spot and future VIX should converge; therefore, either spot VIX will rise or VIX futures price will fall. In the first case, if spot VIX advances, the VIX puts will be worthless, but most likely, the S&P500 puts will be profitable (since when VIX rises, S&P500 falls). In the second case, if spot VIX does not increase, the VIX futures price will fall, and the VIX puts will become profitable (since their pricing is based on the futures price and not on the cash VIX value).

The authors would like to thank the editor and the two anonymous reviewers for their helpful comments and suggestions. 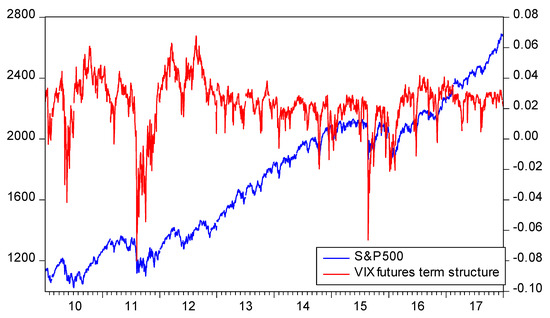