:
Temozolomide (TEM) as a single agent or in combination with capecitabine (CAPTEM) is active in well-differentiated advanced neuroendocrine tumors (NETs) of gastro-entero-pancreatic and thoracic origin. The predictive role of MGMT-promoter methylation in this setting is controversial. We sought to prospectively evaluate the MGMT-promoter methylation status ability to predict outcomes to TEM-based chemotherapy in patients with NET. A single-center, prospective, observational study has been conducted at the ENETS Center-of-Excellence Outpatient Clinic of the IRCCS Policlinico Sant’Orsola-Malpighi in Bologna, Italy. Patients with advanced, gastro-entero-pancreatic or lung well-differentiated NETs candidate to TEM-based chemotherapy and with available tumor samples for MGMT-promoter methylation assessment were included. The MGMT-promoter methylation status was analyzed by using pyrosequencing. The primary endpoint was progression-free survival (PFS) by the MGMT-promoter methylation status. Secondary endpoints included overall survival (OS), objective response rate (ORR), disease control rate (DCR), and safety. Survival outcomes were compared by restricted mean survival time (RMST) difference. Of 26 screened patients, 22 were finally enrolled in the study. The most frequent NET primary sites were the pancreas (64%) and the lung (23%). MGMT promoter was methylated in five tumors (23%). At a median follow-up time of 47.2 months (95%CI 29.3–89.7), the median PFS was 32.8 months (95%CI 17.2–NA), while the median OS was not reached. Patients in the methylated MGMT group, when compared to those in the unmethylated MGMT group, had longer PFS (median not reached [95%CI NA–NA] vs. 30.2 months [95%CI 15.2–NA], respectively; RMST p = 0.005) and OS (median not reached [95%CI NA–NA] vs. not reached [40.1–NA], respectively; RMST p = 0.019). After adjusting for confounding factors, the MGMT-promoter methylation status was independently associated to the PFS. Numerically higher ORR (60% vs. 24%; p = 0.274) and DCR (100% vs. 88%; p = 1.00) were observed in the methylated vs. unmethylated MGMT group. TEM-based chemotherapy was well-tolerated (adverse events grade ≥3 < 10%). In this prospective study, MGMT-promoter methylation predicted better outcomes to TEM-based chemotherapy in patients with NET.
Keywords:
neuroendocrine neoplasms; chemotherapy; biomarkers; epigenetic; gastroenteropancreatic

Temozolomide is an orally-available alkylating agent active in advanced neuroendocrine tumors (NETs), both as monotherapy (TEM) or in association with capecitabine (CAPTEM). Studies have reported objective response rates (ORR) with TEM ranging from 30 to 70%, with even higher rates in combination-therapy studies, in particular with CAPTEM, in pancreatic NETs (panNETs) [1,2,3]. On the other hand, TEM-treatment efficacy seems to be lower in intestinal NETs, with an ORR of 7% [4].
Current guidelines recommend the use of TEM in monotherapy or in association for the treatment of advanced midgut, thoracic, and panNETs [5,6,7,8]. However, there is no guide for clinicians to choose TEM over other treatments or to sequence and improve patient selection.
The DNA damage dealt by TEM is repaired by the “suicide” enzyme O6-methylguanine-DNA methyltransferase (MGMT) [9]. Because of its mechanism of action, the intracellular quantity of MGMT, which is regulated by gene-promoter methylation, is inversely correlated with TEM activity [10]. Among the different assays available, pyrosequencing is the most used to assess MGMT-gene-promoter methylation [11,12]. The correlation of the MGMT-promoter methylation status with response to TEM has been proved in brain tumors, and its assessment is standard in gliomas [13,14,15,16]. Nevertheless, data about the role of this biomarker in NETs are still debated because conflicting results have been reported. However, a prospective trial showed that the combination of capecitabine plus temozolomide was associated with a significant improvement in PFS compared to temozolomide alone in advanced pancreatic NEN patients [17]. This can be due to the retrospective nature of these studies and the different methods used to assess MGMT silencing, including promoter sequencing and immunohistochemistry (IHC) [18,19,20,21,22,23,24,25,26].
Because of the impact in the treatment of NETs, we sought to investigate prospectively the role of the MGMT-promoter methylation status as a predictive biomarker of response to TEM-based chemotherapy in patients with advanced well-differentiated gastro-entero-pancreatic (GEP) and thoracic NETs.

A single-center, prospective, observational study was conducted at the ENETS Center-of-Excellence Outpatient Clinic of the IRCCS Policlinico Sant’Orsola-Malpighi of Bologna (Italy). Between November 2018 and October 2021, well-differentiated gastro-entero-pancreatic or thoracic NETs (WD-NET) of all patients who were candidate to receive TEM-based chemotherapy were tested for MGMT-promoter methylation status before treatment start and were followed-up according to clinical practice. Data-lock date was October 15, 2022. All patients provided written informed consent for treatment and for all the procedures related to the study. This study was approved by a local IRB (Comitato Etico Indipendente, IRCCS Policlinico Sant’Orsola-Malpighi of Bologna) and was conducted in accordance with the principles of the Declaration of Helsinki (revision of Edinburgh, 2000).

The analysis was performed at the Molecular Pathology Laboratory at IRCCS Policlinico Sant’Orsola-Malpighi of Bologna. MGMT-promoter methylation status was evaluated using pyrosequencing. To be considered fully evaluable, the samples had to contain more than 80% tumor cells. DNA extraction from formalin-fixed, paraffin-embedded tissue (from surgical resection specimen or biopsy of primary tumor or metastases) was performed after deparaffinization using a purification kit (MasterPure DNA, Epicentre, Madison, WI, USA). Genomic DNA was modified by bisulfite conversion (EZ DNA Methylation Gold Kit, Zymo, Irvine, CA, USA). Pyrosequencing was performed using the PyroMark Q24 CpG MGMT kit (Qiagen, Hilden, Germany) on a PyroMark Q24 System (Qiagen). Data were analyzed and quantified with the PyroMark Q24 Software 2.0.7 (Qiagen). The mean percentage of the five CpG methylated islands detected by the kit was used for analysis. An 8% cut-off was used, accordingly to neuro-oncology clinical practice: MGMT was considered methylated if methylated alleles were more numerous than not-methylated alleles by at least 8%; otherwise MGMT was scored as not methylated [29,30].

The primary objective of the study was to evaluate the role of MGMT-promoter methylation status in predicting the response to TEM-based regimens in NETs. The primary endpoint of the study was progression-free survival (PFS) by MGMT-promoter methylation status. Secondary objectives of the study include the evaluation of activity by MGMT-promoter methylation status and safety of TEM-based regimens. Secondary endpoints were thus objective response rate (ORR), disease control rate (DCR), and overall survival (OS). Safety of TEM-based treatments was assessed by monitoring any adverse events (AEs). Finally, an analysis to evaluate the costs of this analysis and its feasibility in clinical practice was performed. PFS was measured as the time from treatment start to radiological progression according to RECIST v1.1 or death by any cause, whichever occurred first, while OS was measured as the time from treatment start to death by any cause. ORR and DCR were the rate of the sum of complete response (CR) and partial response (PR), and of CR, PR and stable disease (SD), respectively, assessed according to RECIST v1.1 criteria by a NEN-expert radiologist (C.M.).

Twenty-six patients meeting the inclusion criteria were enrolled in the study. One patient was excluded due to the deterioration of their clinical conditions before the treatment started (screening failure), and three patients were excluded from the analysis due to inadequate material for the MGMT-promoter methylation status assessment (insufficient tissue for DNA extraction or technical problems with the assay). Overall, 22 patients were included in the final analysis (Figure 1).

Eleven patients (50%) received CAPTEM and eleven patients (50%) received TEM as monotherapy (Table 3). Of the 11 patients undergoing CAPTEM treatment, 2 discontinued capecitabine but continued the TEM treatment: 1 patient for toxicity and 1 as maintenance treatment after 42 cycles of CAPTEM combination. TEM-based was the first-line treatment in eight cases (36%), the second line in five (23%), and the third or beyond line in nine (41%). The median time to progression observed in the previous treatment line was 7.5 months (95%CI 4–15). The median duration of the TEM-based treatment was 13 months (95%CI 9–34), with a median number of cycles of 12 (IQR 9–22). The median follow-up time was 23 (IQR 13–44) months. At the time of the data analysis (October 15, 2022), 11 patients (50%) were still receiving TEM-based treatment, 2 (9%) discontinued treatment following a long-lasting response, 3 (14%) discontinued treatment for AEs, and 6 (27%) discontinued for PD, of whom 4 had died. In our cohort, three (60%) out of the five MGMT-methylated patients received the doublet therapy (CAPTEM), while two (40%) received temozolomide as a single agent. In the non-methylated group (17 patients), 8 (47%) patients received the doublet therapy, while 9 (53%) received temozolomide alone (Fisher’s p = 1.00).

3.4. Exploratory Analysis in Patients with panNET

The costs related to the MGMT-promoter methylation analysis have been evaluated. For each patient, three assays had to be performed: one on the tested tumor sample, one on a non-neoplastic sample, and one on a positive control (a known MGMT-methylated sample). Processing each assay costs around EUR 20, thus the cost for the final analysis of each patient is EUR 60. Overall, for the 22 patients included in this study, the methylation assays have costed EUR 1320, and the number needed to be tested to find a MGMT-unmethylated tumor was 4.4. Since the observed RMST difference for PFS has been 43.37, there has been a 1.97 RMST PFS increase for each assay performed, and an increase of 1 RMST in PFS has been observed every EUR 30.44.

The study was conducted in accordance with the Declaration of Helsinki, and approved by a local IRB (Comitato Etico Indipendente, 04/05/2017; IRCCS Policlinico Sant’Orsola-Malpighi of Bologna, 12/02/2020). 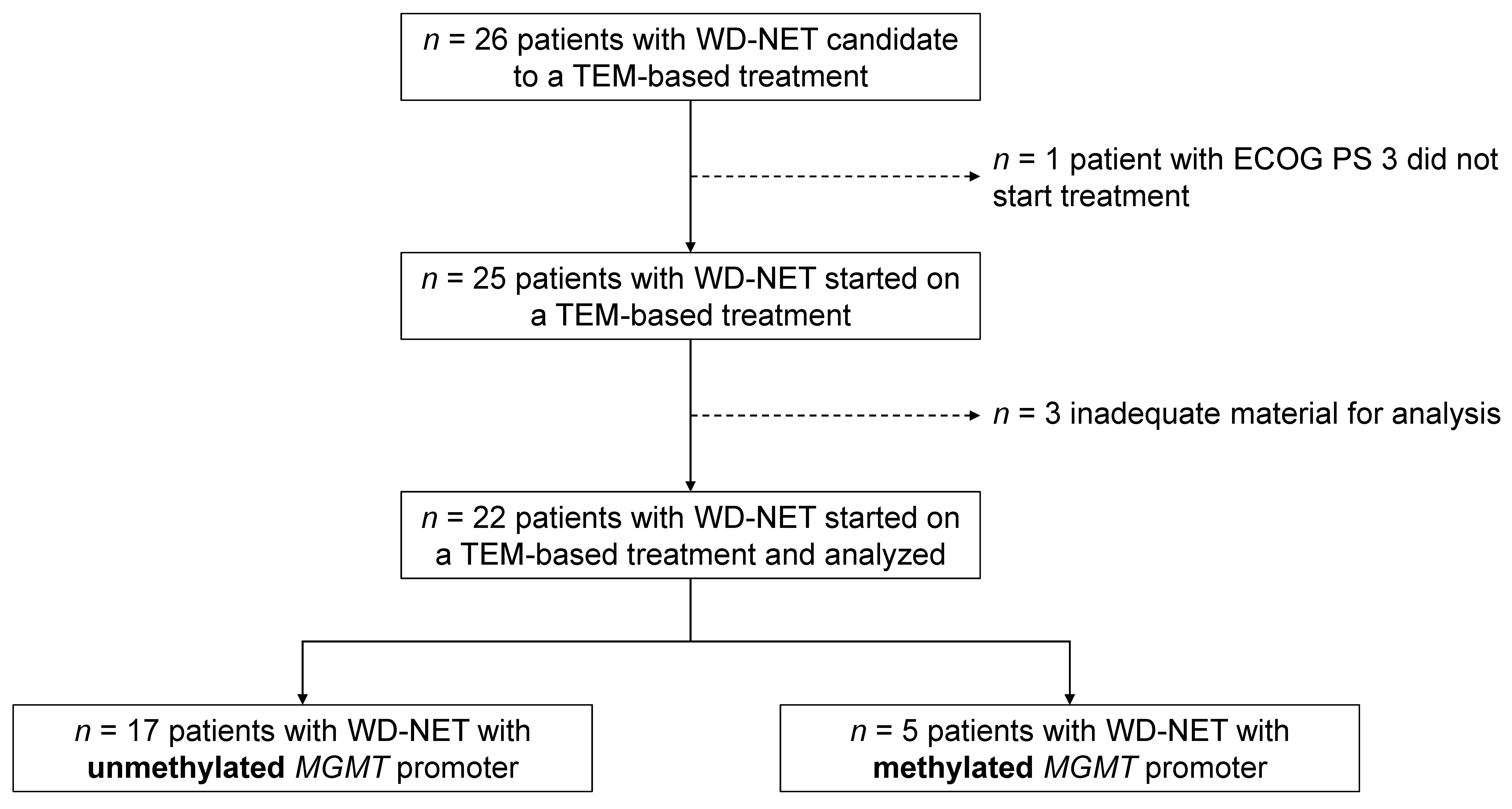