Neoadjuvant Therapy in Lung Cancer: What Is Most Important: Objective Response Rate or Major Pathological Response?
Previous Article in Journal

Incidence, Etiology, Prevention and Management of Ureteroenteric Strictures after Robot-Assisted Radical Cystectomy: A Review of Published Evidence and Personal Experience

The most common adverse reactions to rituximab are infusion-related reactions (IRR). We evaluated the efficacy of split dosing the first rituximab infusion over two days to reduce IRR incidence in patients with hematological cancer and a high lymphocyte count. This is a retrospective observational study conducted in two healthcare centers in Quebec, Canada. The study enrolled patients with white blood cell counts ≥25.0 × 109/L who received their first rituximab dose for hematological cancer between December 2007 and May 2020. One healthcare center used asymmetrical split dosing, while the other used symmetrical split dosing. A total of 183 treatment episodes were collected from 143 patients. Among patients who received a fractionated dosing schedule, 42% developed an IRR from the first rituximab infusion compared with 50% for the standard protocol (adjusted relative risk, 0.89; p = 0.540). No significant difference was observed in IRR severity between either groups. However, 24% of patients who received the asymmetrical protocol developed an IRR compared to 68% for the symmetrical protocol (adjusted relative risk, 0.32; p = 0.003). These results suggest that an asymmetrical split dosing could be effective in reducing the incidence of IRR and is preferable to a symmetrical one. View Full-Text
Keywords: fractionated dosing schedule; high lymphocyte count; infusion-related reactions; rituximab; split dosing fractionated dosing schedule; high lymphocyte count; infusion-related reactions; rituximab; split dosing
►▼ Show Figures 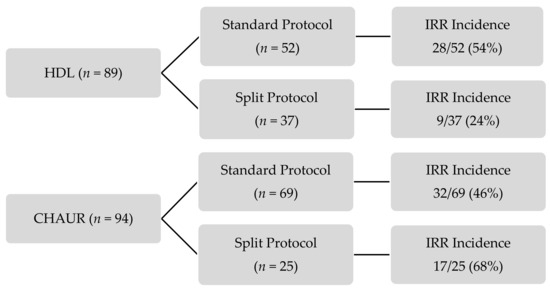