A total of 63 female patients (mean age of 53.32 ± 9.47 years; ages ranged from 33 to 75 years) were qualified for our retrospective analysis. Between 2016 and 2019 they were put forward for NAC due to breast cancer in the University Clinical Center of the Medical University of Silesia in Katowice, Poland. Inclusion criteria encompassed: a diagnosis of breast cancer (based on core needle biopsy), minimal stage of T1N+, age of more than 18 years, completion of NAC treatment, surgery after NAC, and a complete set of imaging examinations—CESM; ultrasonography (US) of the breast, lymph nodes, and abdomen; and chest X-ray. Exclusion criteria were as follows: known BRCA1 or BRCA2 mutation (to provide the highest radioprotection), pregnancy, anaphylaxis or anaphylactoid reaction to a contrast agent in medical history, e-GFR of less than 60 mL/min, chronic kidney disease in stage 3 or higher, and incomplete NAC. Patients with significant post-biopsy changes (e.g., hemorrhage) affecting image quality were also excluded. A full description of the study group is in Table 1.
Due to the retrospective nature of this study, the local ethics committee of the Medical University of Silesia repealed the requirement for informed consent (decision number PCN/0022/KB/157/20). All the test procedures were carried out in compliance with the ethical principles of the 1964 Helsinki Declaration and its subsequent amendments.

After the end of breast cancer diagnosis, each patient’s final decision concerning the proper treatment was made by the multidisciplinary breast cancer team (BCU) unit, taking into account patients’ preferences. Following the decision by the BCU team, 98% of patients received chemotherapy based on anthracyclines and taxanes (for a period of 12 weeks), including 30% in the “dose-dense” regimen. Only one patient did not receive anthracyclines due to a limited dose of anthracyclines in earlier treatment of Hodgkin’s disease. Due to the lack of public funding for trastuzumab in this center in the years 2016–2019 (no drug prescription government program), all the cancer patients with positive HER2 were treated outside our center and were not included in this analysis.

All CESM examinations were performed in our hospital. They were carried out with the use of a digital mammography device dedicated to performing dual-energy CESM acquisitions (SenoBright, GE Healthcare, 3000 N. Grandview Blvd., Waukesha, WI, USA). An intravenous injection of 1.5 mL/kg of body mass of non-ionic contrast agent was performed using a power injector at a rate of 3 mL/s with a bolus chaser of 30 mL of saline. In CESM mode, the device automatically performed a pair of exposures (low- and high-energy) in each view. Specific image processing of low-energy and high-energy images was done. This processing aimed to obtain subtraction images to highlight contrast enhancement and suppress structured noise due to fibroglandular breast tissue. The morphological information obtained from low-energy images of CESM is similar to the morphological information given by standard mammography and the functional information obtained from subtraction images of CESM visualizes the vascularization of breast lesions [24,25,30]. For each view, the CESM technique made it possible to obtain two images: a low-energy acquisition at 26–30 kVp and a high-energy acquisition at 45–49 kVp, with these values depending on breast density and thickness. Motion blur could be sometimes observed on subtraction images due to movements between the acquisition of low- and high-energy images. All of the images obtained were in the DICOM format [31]. The total examination time was usually 10 min. After examination, the patients were observed for approximately 30 min for any adverse reactions that may have occurred after administration of the contrast agent.

All CESM examinations were carried out two times: just before the beginning of NAC and as a follow-up examination 2 weeks before the end of chemotherapy to evaluate its effect (and to inform decisions about possible changes in therapeutic strategies). For our retrospective analysis, we performed renewed CESM image evaluations with every patient. Such evaluations were made separately by two different radiologists with 20 years of experience and a minimum of 5 years’ experience in CESM image interpretation. Radiologists were blinded from each other and from the results of histopathological examination. CESM images were assessed according to the Breast Imaging-Reporting and Data System (BI-RADS) scale. Three measurements were taken in the CC and MLO projections, while the statistical analysis encompassed one—i.e., the largest dimension of the tumor. The tumor dimensions were compared while analyzing:
The response to preoperative chemotherapy was evaluated based on the Response Evaluation Criteria in Solid Tumors (RECIST) 1.1 criteria. The response was classified as follows: complete response (CR, disappearance of all lesions); partial response (PR, ≥30% dimensional reduction), stable disease (SD, <30% dimensional reduction/<20% dimensional increase), and progressive disease (PD, ≥20% dimensional increase) [17,32]. For this article, PR, SD, and PD have been classified as “non-CR”.
After surgery, a comparison of the NAC response, evaluated with the use of CESM (both low-energy and spectral images), to the histopathological study results was undertaken. Our analysis of histopathology (HP) was used as a “golden standard” against which the effectiveness of both CESM image types in NAC response detection could be analyzed.

The histopathological examination was conducted in the Histopathology Laboratory of our center by two pathologists with broad experience in breast cancer diagnostics. The greatest dimension of the tumor, necessary for determining the T descriptor in the pTNM classification apart from the macroscopic measurement, was verified histopathologically. This verification was undertaken using a microscope and the Olympus Cell Sens Dimension® software (Japan, 2013). Tumors up to 2 cm were excised whole, serially, on a cross-sectional basis with a margin of 0.2 to 0.4 cm and embedded in a paraffin block after each cross-section. Tumors measuring over 2 cm that could not fit within a single paraffin block were divided into two or more parts by making parallel cuts of the lesion. Next, they were marked in pairs with ink of the same color and the individual layers were given numbers to allow for the restoration of the largest section of the tumor. The T value of the tumor was the total of the parallel measurements of the particular parts of the lesion.

Tumors that underwent histopathology examination were used as the “gold standard” and compared to the tumor sizes derived from CESM images. The normality of the distribution was assessed using the Shapiro–Wilk test and the continuous variables were summarized using the arithmetic mean with standard deviation for data following a normal distribution or a median with quartiles 1 and 3 for data demonstrating anon-normal distribution. Comparison of four respective aspects referring to the maximal tumor dimension (defined as the maximum of three dimensions measured in the CESM and histopathology) included the Pearson’s correlation coefficient (R-value) in order to measure the strength of the relationship between low-energy and subtraction images of CESM measurements. Paired t-tests were used to assess mean differences between each analyzed study participant. The correlations of data are illustrated by plotting the actual measurements while all paired measurements for each patient are summarized using paired linear plots. A p-value of <0.05 was considered statistically significant. The diagnostic performance indexes for low-energy and subtraction images for complete response and non-complete response were tested using the Clopper–Pearson test with 95% confidence intervals. Statistical analyses were carried out using Statistica 10 (StatSoft Inc., Tulsa, OK, USA) and MedCalc Statistical Software 16.4.3 (MedCalc Software by, Ostend, Belgium) software.

Due to the possibility of assessing vascularity, CESM is characterized by high sensitivity in the assessment of CR after NAC. The use of morphological assessment alone is insufficient. CESM correlates well with the sizes of residual lesions from histopathological examination but tends to underestimate the dimensions.

Due to the retrospective nature of this study, the local ethics committee of the Medical University of Silesia repealed the requirement for informed consent (decision number PCN/0022/KB/157/20). All the test procedures were carried out in compliance with the ethical principles of the 1964 Helsinki Declaration and its subsequent amendments.

Data are available upon special request. 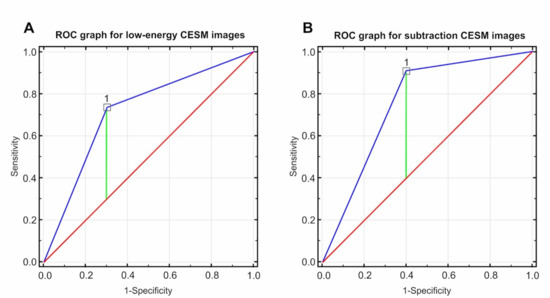 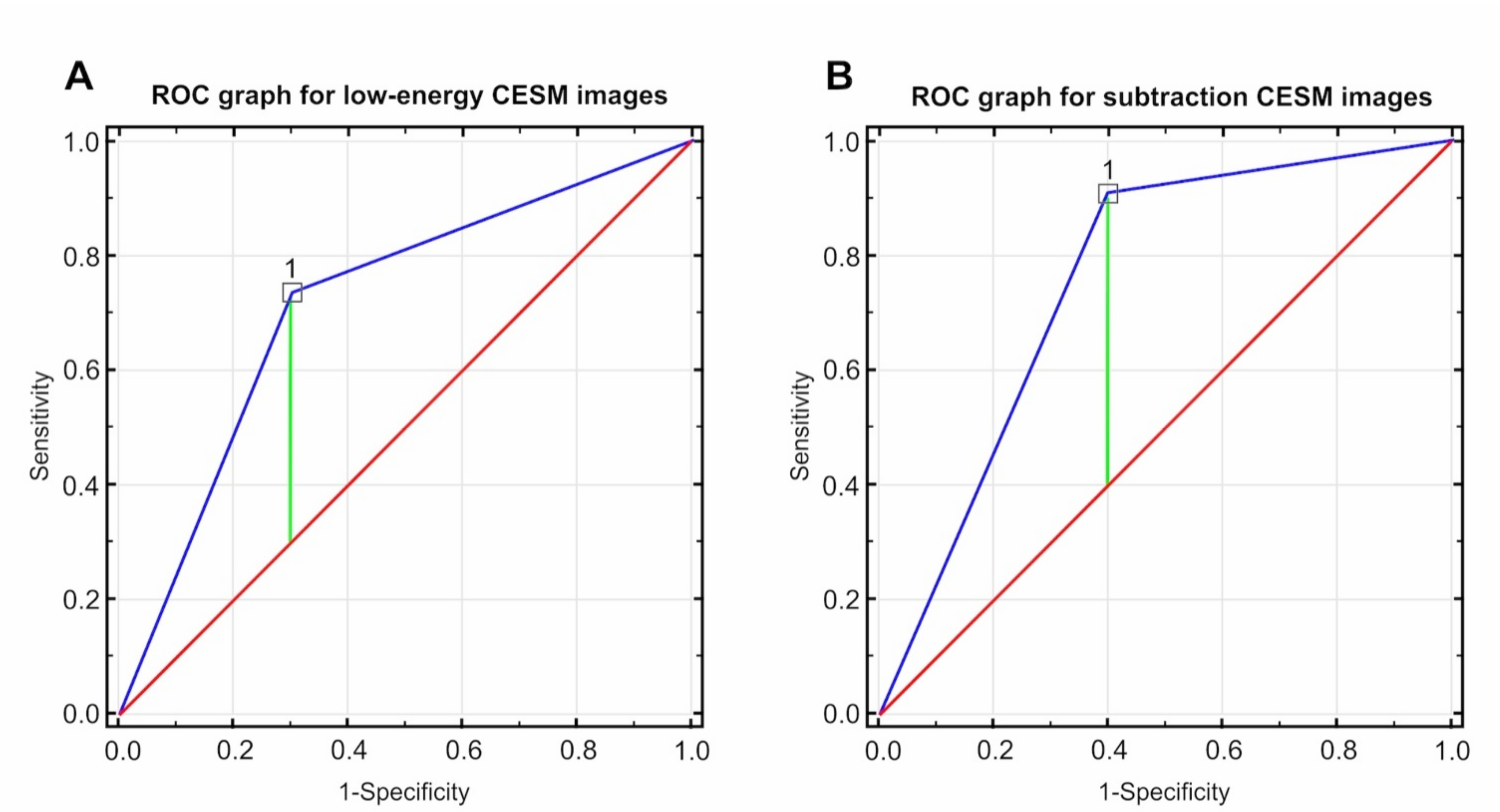