Multivariate Analysis of the Predicted Probability of Smoking Behavior of Foster Care Minors: Results of a Study from Romania
Previous Article in Journal

Effect of a Nutritional Support System to Increase Survival and Reduce Mortality in Patients with COVID-19 in Stage III and Comorbidities: A Blinded Randomized Controlled Clinical Trial

The SARS-CoV-2 disease was first identified in Wuhan, China, in December 2019 [1] and was declared a global pandemic on March 11, 2020, by the World Health Organization [2]. Epidemiologically, according to the WHO until December 2021, there are a total of 270,155,054 confirmed cases with a total of 5,305,991 deaths, with a 2.18% mortality rate and a hospital mortality rate between 15% and 20% [3]. In Mexico the number of deaths amounts to 296,984. The mortality rate is 9.07% [4,5] with hospital mortality of 46% and 75% among intubated patients [6,7]. Comorbidities such as obesity, systemic arterial hypertension (SAH), and type 2 diabetes mellitus (DM 2) have been associated with more severe disease symptoms [8]. Treatment is not specific; international guidelines recommend analgesia, retroviral, steroids, anticoagulation, and the occasional use of monoclonal antibodies, depending on the stage, the thrombotic risk, and renal and liver function [9].
Regarding nutritional support, the European Society for Parenteral and Enteral Nutrition (ESPEN) Guidelines recommend an energy calculation of 27–30 kcal/kg/day, proteins up to 1.5 g/kg/day, carbohydrates, and lipids with a proportion of 30:70 and 50:50 in patients with respiratory failure [10]. The evidence of nutrients, probiotics, minerals, and certain vitamins for therapeutic use is limited, although some are studied to improve the prognosis of patients [11]. It is known that patients with COVID-19 are catabolic and decrease their protein reserve together with cachexia and hyporexia, provoking nutritional deficit and dysbiosis [12,13]. If malnutrition prevails, it compromises immunity and inflammatory response, so a Nutritional Support System (NSS) may be necessary to reduce complications due to SARS-CoV-2, the progression to MVA, and even death [14]. The aim of this study was to investigate the effect of the NSS to increase survival and reduce mortality in patients with stage III COVID-19 and comorbidities.

A randomized, blinded, controlled clinical trial was conducted at Centro Medico ISSEMyM Toluca (CMI), State of Mexico. The clinical phase started in September 2020. At discharge, each patient was followed for 40 days or until death. Recruitment ended in February 2021 and follow-up ended in April 2021.
Sampling and group assignment: Consecutive cases. Randomization was performed in blocks of 10 patients, assigned by a sequence of random numbers obtained from the Excel program and divided into two groups.
A triple blinding was planned: 1. Participants had no contact with each other because they were isolated, and when collecting informed consent, they were made aware that nutritional support might or might not be included with their meals as well as being part of regular medication or not; 2. The evaluators (treating physicians, care, and laboratory personnel) were unaware of the patient’s allocation; 3. Outcomes Assessors.
One hundred and fifty patients were interviewed, 80 were chosen and randomized, and 40 patients were assigned to each group. The two groups were: 1. Control Group (CG); and 2. Intervention Group (IG) (Figure 1).
After deaths, there were 33 patients in the CG and 39 patients in the IG who completed the follow-up on day 40. The nutritional adequacy and calculation of all the patients in the study were performed by the hospital nutrition department before they were enrolled in the study; this department did not know the assignment of the patients. The nutritional intake in the baseline was assessed by food diary analysis. Food diaries were applied and collected by the research team; each patient was followed up from the initial interview until hospital discharge.
The IG received the NSS, which consists in:

Table 1 summarize the effects of the nutrients contained in the NSS.
The clinical staff, evaluators, and patients were unaware of the treatment assignments. The research team was responsible for the administration of the NSS without any other patient or treating physician in the study being aware of it.
Discharge criteria were: spO2 > 90% with a minimum of 2 L of supplemental oxygen, BR < 20 bpm, T° < 37 °C, with no data of sepsis.

Data distribution in numerical variables was analyzed using Shapiro–Wilk normality test. For the analysis of overall survival and mortality, progression to ventilation, and survival and mortality in intubated patients, Kaplan–Meier curves and significant difference by Log-Rank were used.
For the intergroup comparison analysis of the numerical variables, a t-test or Mann–Whitney test was used. For the intragroup analysis, paired t-test or Wilcoxon test was used.
For the analysis of qualitative variables, the Fisher’s exact test (one-sided) was used; p values ≤ 0.05 were considered indicative of statistical significance. The programs used were Prism 6 and SPSS Statistics version 25.

Informed consent was obtained from all participants. The Declaration of Helsinki, the Nuremberg Code, and the Mexican Standard NOM-012-SSA3-2012 were considered. The research was approved by the research committee of the Faculty of Health Sciences of the Universidad Anáhuac México Norte, registration number: 202062, CONBIOETICA-15-CEI-004-20160729, the research committee of the CMI Toluca, registration number: 207C0401010201S/JIC/155/2020, and Clinical Trials registration code: NCT04507867.

Eighty patients were chosen and randomized, and 40 were assigned to each group. After the deaths, 33 CG patients and 39 IG patients completed follow-up at day 40.

3.2. Survival and Mortality of the Studied Patients

Our study provides important results on the positive effect of NSS on survival and decreased mortality in these hospitalized patients with COVID-19, associating that the use of different nutrients together, in addition to the adequate regulation of the microbiota, is determinant for the clinical improvement, prognosis, and evolution of the disease.
Although more multicenter studies are needed to corroborate the impact of these findings and to replicate the results obtained to recommend their use, this study leaves a precedent of a significant effect in a small sample that may serve other researchers to consider complementing new therapeutic lines.

Data supporting the reported results can be obtained by contacting the corresponding author.

We would like to thank the authorities of Centro Medico ISSEMyM Toluca for providing us with their facilities and equipment as well as the execution of laboratory studies, Alimentos Esenciales para la Humanidad, Telomer Lab SA de CV, and Jesse Adams for supporting us with the review of this article. 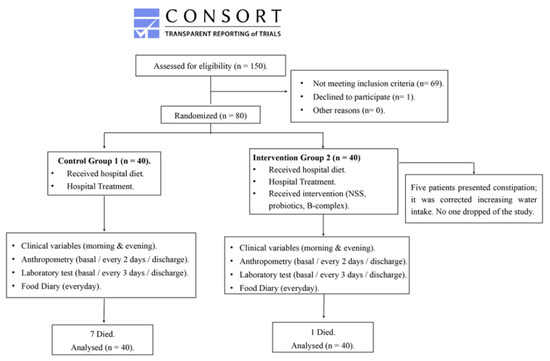 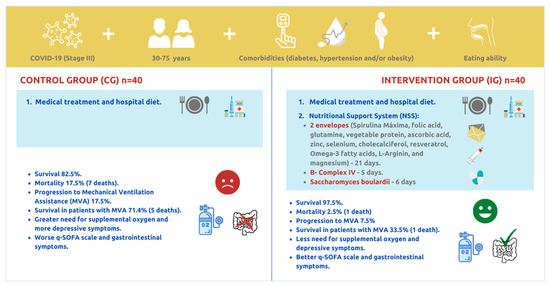 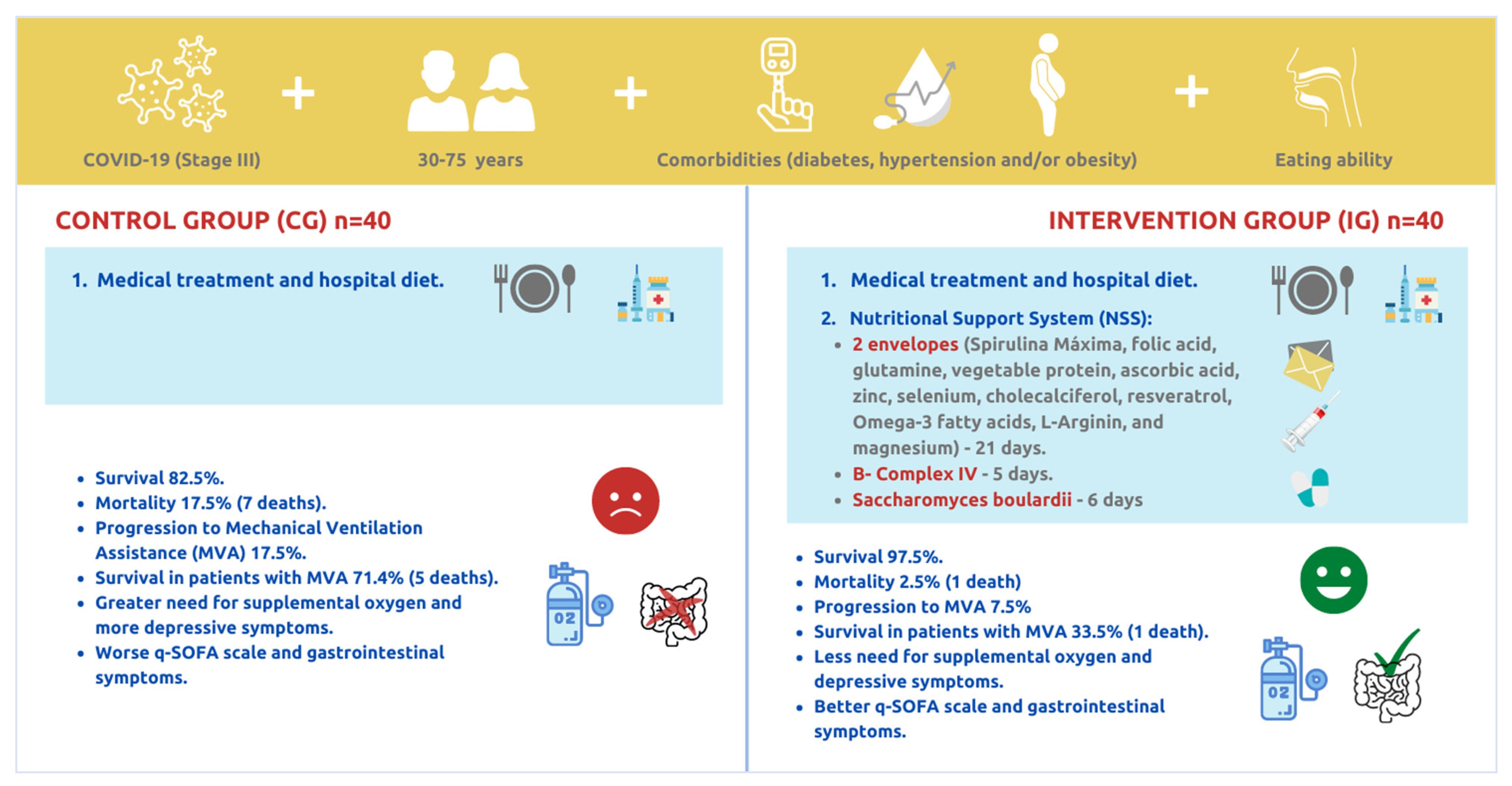