Children’s and Families’ Determinants of Health-Related Behaviors in an Italian Primary School Sample: The “Seven Days for My Health” Project
Previous Article in Special Issue

The purpose of this study was to verify if a conditioning activity was effective to elicit postactivation performance enhancement (PAPE) and to increase the performance in vertical jump (VJ) in elite female volleyball players. Eleven national Superliga-2 volleyball players (22.6 ± 3.5 years) were randomly assigned to an experimental and control group. Countermovement jumps (CMJ) were performed on eight occasions: before (Pre-PAPE) and after activation (Post-PAPE), after the match (Pre-Match), and after each of the five-match sets (Set 1 to 5). ANOVA showed significantly increased jump performance for the experiment between baseline (Pre-PAPE) and all the following tests: +1.3 cm (Post-PAPE), +3.0 cm (Pre-Match), +4.8 cm (Set 1), +7.3 cm (Set 2), +5.1 cm (Set 3), +3.6 cm (Set 4), and +4.0 cm (Set 5), all showing medium to large effect size (0.7 < ES < 2.4). The performance of the control group did not show significant increases until Set 3 (+3.2 cm) and Set 5 (+2.9 cm), although jump heights were always lower for the control group than the experimental. The use of conditioning activity generates increased VJ performance in Post-PAPE tests and elicited larger PAPE effects that remain until the second set of a volleyball match.
Keywords: back squat; countermovement jump; sports performance; PAP; RM; training back squat; countermovement jump; sports performance; PAP; RM; training

Twelve Superliga 2 players of University of Alicante volleyball team volunteered to participate in this study (Table 1). Informed consent was obtained from all subjects involved in the study, who read and signed the document before any action in the study was taken. The study was conducted according to the guidelines of the Declaration of Helsinki [40], and approved by the Ethics Committee of University of Alicante (UA-17 November 2018).
The inclusion criteria were to have 4 years of experience minimum in the practice of volleyball in a national competition and to have previous knowledge in both strength training and half-squat exercise. The exclusion criteria were not to participate in all the tests involved in the study or to suffer injury or illness that prevents the performance of the tests. A control group participant suffered an injury during the experimental process, therefore, she was excluded from the experimental procedure and subsequent analysis.

The experimental design shown in Figure 1 consisted of three phases: individualization, activation, and match, which are described in more detail as follows.

2.3.1. Estimation of 1RM in the Half-Squat Exercise

In order to determine the load corresponding to the 1RM percentage in the half-squat exercise for the PAP protocol, the relationship between force and velocity was analyzed, since the speed of execution and the percentage of 1RM are proportional to each other [41]. An incremental loading test was carried out, in which the initial load was established at 30 kg and was gradually increased in 10 kg steps until mean barbell velocity was below 0.50 m/s (i.e., around 80% of 1RM). Afterward, the load was increased from 5 kg and at the end of the test, with speeds close to 0.30 m/s, increments of 1 kg were made to reach 1RM in the most precise way [42,43]. The value of 1RM was considered the load interpolated in the force–velocity profile with the average acceleration velocity value for the half-squat exercise of 0.30 m/s [44]. The players were refrained from performing physical activity 48 h previous to the test to ensure the absence of fatigue.

To determine the possible effect of the activation on PAPE in the lower train, countermovement jump (CMJ) heights were measured using a jump mat [45]. CMJ was performed starting from the standing position, with their feet in the center of the jump mat and hands positioned at the hips in akimbo position. After an auditory signal, subjects performed a knee flexion before jumping vertically to maximum height and were instructed to land in the center of the jump mat. A video camera monitoring players in sagittal plane was used to control that knee flexion reached the right joint angle. Three attempts were carried out with a 60-s resting time [44] and the highest value was considered for data analysis [45].

Considering that the sample were players with four years of minimum experience in volleyball training, they can be considered as trained subjects, so the guidelines set by Dobbs et al. (2018) in their meta-analysis were observed, as well as the corresponding 3-repetition activation protocol at 90% intensity of 1RM [35,46] with a resting time of 8 min. Such a protocol follows the margins indicated by these authors [26] and also the rest of the studies consulted [23,24,32,34,45].
Prior to activation, a standardized warm-up was performed for both groups, control and experimental, consisting of 4 min of soft running followed by 4 min of dynamic stretching; then 2 min of speed and changes of rhythm and direction inside the playground, and 5 consecutive CMJ jumps to finish [23]. After the warm-up, 2-min rest period was performed, followed by an initial evaluation of jump height before activation (Pre-PAPE test).
The experimental group performed the activation protocol, consisting of an approaching phase (12 repetitions with 20 kg, 3-min rest, 5 repetitions at 50% of 1RM, 3-min rest), followed by a conditioning phase (3 repetitions at 90% of 1RM). The control group executed the same approaching phase as the experimental group, but when the experimental group performed the conditioning phase control group executed a maintenance workout, consisting of smooth running interspersed with slight changes of direction and 3 vertical jumps. After 8 min, CMJ was measured (Post-PAPE test) to both groups with an identical methodology to that of the Pre-PAP data collection.

2.3.4. PAPE Monitoring during a Volleyball Match

After warm-up was finished, both groups performed a CMJ test before starting the match (Pre-match) and also just at the end of every set of the match (Set 1 to Set 5). This procedure allows describing the evolution in the height reached for volleyball players in a match, as well as to check whether the experimental group shows enhancement derived from PAPE and how much this condition lasts.

Descriptive data are presented as mean and standard deviation. Due to the small sample size, the Shapiro–Wilk normality test was used, which resulted in a normal distribution. The differences in jump height between Pre-PAPE, Post-PAPE, Pre-match, Set 1, Set 2, Set 3, Set 4, and Set 5, in regards to experimental and control groups were evaluated using a repeated-measures ANOVA, including the different tests in time points as an intragroup variable and group as a between-subjects factor. Variance homogeneity and homogeneity of the error variances were verified via the Mauchly’s test (p = 0.304) and the Levene’s Test of Equality of Error (p range between 0.192 and 0.892 for all comparisons). In addition, a t-test for independent samples was conducted to compare differences on improvement percentage between experimental and control groups. The level of significance was set at p ˂ 0.05. The d index was analyzed to determine the magnitude of an effect independent of sample size [47] and to classify the effect size, the criteria of Rhea for elite trained athletes were applied (d < 0.25 trivial; 0.25 ≤ d > 0.50 low; 0.50 ≤ d > 1.0 moderate; d ≥ 1.0 Large) [48]. In this quasi-experimental study, the sample is composed of volleyball elite players competing at a national level. Power analysis conducted with G*Power (v3.1.9.7, Heinrich-Heine-Universität Düsseldorf, Düsseldorf, Germany) indicated a minimum sample size of n = 11 subjects in order to detect an effect size of Cohen’s d = 1.6 with 80% power (α = 0.05, two-tailed) [49].

The use of conditioning activity consisting of three repetitions of 90% of 1RM in the back half-squat exercise generates differences in the increase in CMJ heights between control and experimental group in Post-PAPE tests and elicited larger PAPE effects that remain until the second set of a volleyball match. The results of this study suggest that, if the activation is fitted individually on the correct form, and combined with an optimal warm-up, PAPE may be used to improve vertical jump performance, a key feature in volleyball and other related sports. Therefore, the inclusion of such protocols in volleyball warm-ups should be considered by coaches and physical trainers of volleyball teams. However, further investigation should be carried out, following different warm-up strategies with a wider sample in order to generalize the results achieved in the present study.

This research was funded by Generalitat Valenciana, grant number GV/2021/098.

The study was conducted according to the guidelines of the Declaration of Helsinki, and approved by the Ethics Committee of University of Alicante (UA-17 November 2018, date of approval 20 December 2018).

Data can be obtained through the corresponding author on reasonable request. 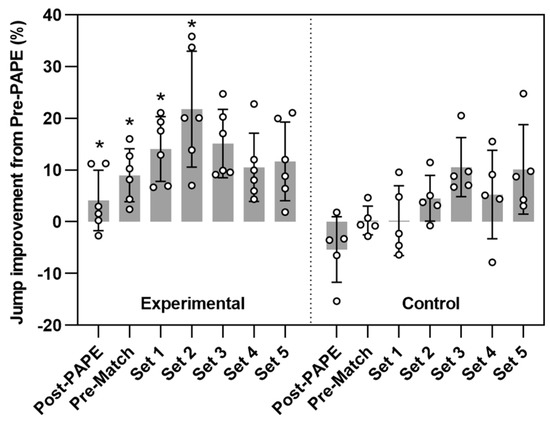