Impacts of High Environmental Temperatures on Congenital Anomalies: A Systematic Review
Next Article in Special Issue

Yeong In Kim
1 and

Serum alanine aminotransferase (ALT) activity has been used as a predictor of overall health status, as well as for liver function monitoring [1]. The liver produces the enzyme ALT; a high serum ALT level is indicative of liver diseases such as cirrhosis or hepatitis. However, recent studies have revealed that a significantly reduced ALT level increases the mortality rate in the elderly population [2,3]. According to a meta-analysis report, each 5 U/L decrease in serum ALT increases mortality [4]. Thus, significantly reduced ALT level could be a result of frailty [2,5]. In elderly individuals with frailty, multiple organ failure may occur. Moreover, sarcopenia may occur because of decreased muscle synthesis, and the synthesis of body-controlled substances may decrease because of decreased liver function. Albumin is synthesized in the liver, and studies have shown an association between a reduced serum albumin level and frailty and mortality [6,7]. ALT is also an enzyme synthesized in the liver that decreases with aging [8].
The term “frailty” refers to a condition of vulnerability to external stress, wherein the physical function is reduced to protect homeostasis; however, frailty itself does not raise the risk of death [9]. Frailty can occur due to illness, but about 32% of elderly individuals without any disease are known to be frail [10]. Frail individuals cannot recover from severe stress situations, which can lead to death [11]. Ischemic stroke is one of the most physically stressful diseases [12]. Patients with stroke experience extreme physical stress, even if they have fully recovered without complications [13].
Frailty and ischemic stroke are common among the elderly. To our knowledge, no study has investigated the relationship between a significantly reduced ALT level and mortality after ischemic stroke. We assumed that a significantly reduced ALT level is related to frailty and could increase the all-cause mortality rate following an ischemic stroke. The aim of this research was to investigate whether a significantly reduced ALT level increases the all-cause mortality rate in the elderly with ischemic stroke.

Between February 2014 and April 2019, a retrospective study of 901 patients with ischemic stroke admitted to a university-affiliated hospital was conducted. A review of the medical records of these patients diagnosed using magnetic resonance imaging or computed tomography was performed. The exclusion criteria and number of patients excluded were as follows: suspected liver disease (ALT level >40 U/L; n = 92), not the first episode of acute ischemic stroke (n = 244), insufficient medical records (n = 8), and age < 65 years (n =234).
Finally, 323 participants were enrolled in the study (Figure 1), which was approved by the university-affiliated hospital’s Institutional Review Board.
Of the 901 patients, 92 patients with ALT levels over 40 were excluded and 244 patients had a previous history of stroke. Of the remaining stroke patients, 8 patients had insufficient medical records, and 234 patients under the age of 65 were excluded. Finally, 323 subjects were enrolled in the study.

Factors known to be linearly associated with mortality, such as initial NIHSS score at admission, age, Cr, total cholesterol, and ESR, were used as continuous variables [14,15,16,17,18,19,20,21].
A serum albumin level of less than 3.5 g/dL, glucose level of more than 7.3 or less than 3.7 mmol/L, and Hb level of less than 11 g/dL are all considered risk factors for death [6,18,22]. Both underweight and obesity are considered to be related to a higher risk of death. BMI (kg/m2) was used as a categorical measure, and participants were divided into the following four groups: underweight (18.5), average weight (18.5–24.9), overweight (25.0–29.9), and obese (over 30) [23,24]. According to a meta-analysis report, each 5 U/L decrease in serum ALT increased mortality [4]. The criterion for significantly reduced ALT level was set at 10 U/L, based on previous research.

Participants of the study were divided into the expired group (those patients with death after acute cerebral infarction) and surviving group (those patients who survived after acute cerebral infarction). The differences between groups were compared statistically. An independent t-test for continuous variables and Fisher’s exact test or chi-square test with a post-hoc Bonferroni test for categorical variables were used. Continuous variables were defined as the mean standard deviation for normally distributed variables and categorical variables as frequency and percentage.
The cumulative risk of overall survival at 79 months was estimated using the Kaplan–Meier method. Stratified analyses were made for the ALT level (<10 U/L, and 10–40 U/L). Time-to-event comparisons were made using the log-rank test.
The relationship between a significantly reduced ALT level (less than 10 U/L) and mortality was assessed using a multivariate Cox proportional model (Forward stepwise: Conditional) that controlled for possible confounding factors including age, sex, TOAST classification, stroke location, hemispheric localization, initial NIHSS at admission, SBP at admission, SBPV, thrombolytic treatment, reduced albumin level (less than 3.5 g/dL), reduced Hb level (less than 11 g/dL), abnormal glucose level (more than 7.3 or less than 3.7 mmol/L), serum Cr, ESR, NLR, total cholesterol levels, BMI, history of hypertension, diabetes mellitus, atrial fibrillation, coronary artery occlusive disease, cancer, smoking, and alcohol consumption. A statistically significant value was defined as a p-value of less than 0.05.
For testing the proportional hazard assumption in the Cox model, first we used a visual inspection of the log minus log curve. Second, a time-dependent Cox regression analysis was additionally performed to investigate whether the time-dependent covariate was not significant.
The statistical analysis was performed using the Statistical Package for the Social Sciences, version 22.0 (IBM Corp., Armonk, NY, USA).

This study enrolled 323 older adults aged ≥65 years. Their mean age was 76.5 ± 6.6 years and their mean survival time was 37.1 ± 20.4 months; death was reported in 96 (29.7%) cases. IVtPA treatment was performed in 13 patients (4.0%), and the mean time to IVtPA treatment was 68.8 ± 30.5 min. Stent retriever treatment was performed in 20 patients (6.2%), and the mean time to stent retriever treatment was 132.7 ± 60.0 min. IVtPA with stent retriever treatment was performed in three patients (0.9%). The general characteristics of the expired and surviving groups are shown in Table 1. Compared with the surviving group, the expired group was older and normal weight, with higher levels of initial NIHSS at admission, SBPV during the first 24 h, creatinine levels, and ESR value, and with lower levels of ALT, albumin, and Hb (Table 1).
Figure 2 is a Kaplan–Meier survival function with a stratified analysis for the ALT level (<10 U/L and 10-40 U/L). The cumulative 79-month survival was 27.4% in patients with a significantly reduced ALT level versus 63.1% in patients with a normal level of ALT (p < 0.001).
The association between the selected risk factors and all-cause mortality was assessed through univariate analysis (Supplementary Material Table S1). Table 2 shows the unadjusted and adjusted hazard ratio (HR) for all-cause mortality for a significantly reduced ALT level. Elderly patients with ischemic stroke with a significantly reduced ALT level had an increased risk of all-cause mortality in both the unadjusted (HR = 2.73, 95% CI 150 1.50–4.98) and adjusted analyses (3.24, 1.95–5.41). In addition, age, initial NIHSS score, and serum Cr levels at diagnosis were also significant risk factors. A visual inspection of the log minus log function showed that the assumption of proportional hazards was appropriate. To further the testing of the proportional hazard assumption in the Cox models, we additionally generated the time dependent covariates by creating an interaction between the ALT level and a function of survival time, and included this in the model. The time dependent covariate was not significant.

In conclusion, a significantly reduced ALT level at diagnosis (less than 10 U/L) is an independent risk factor that increases the mortality rate in the elderly after ischemic stroke.

The following are available online at https://www.mdpi.com/article/10.3390/ijerph18094915/s1, Table S1: Univariate analysis. Hazard ratio and 95% CI for all-cause mortality, according to the selected risk factors.

No funding was received for this research.

This retrospective chart review study was performed in line with the principles of the Declaration of Helsinki. Approval was granted by the Institutional Review Board of the Catholic Kwandong University International St Mary’s Hospital (IRB No. IS19RISI0037).

Not applicable. Our research was a retrospective study and was thus did not need to obtain the appropriate participants’ informed consent. 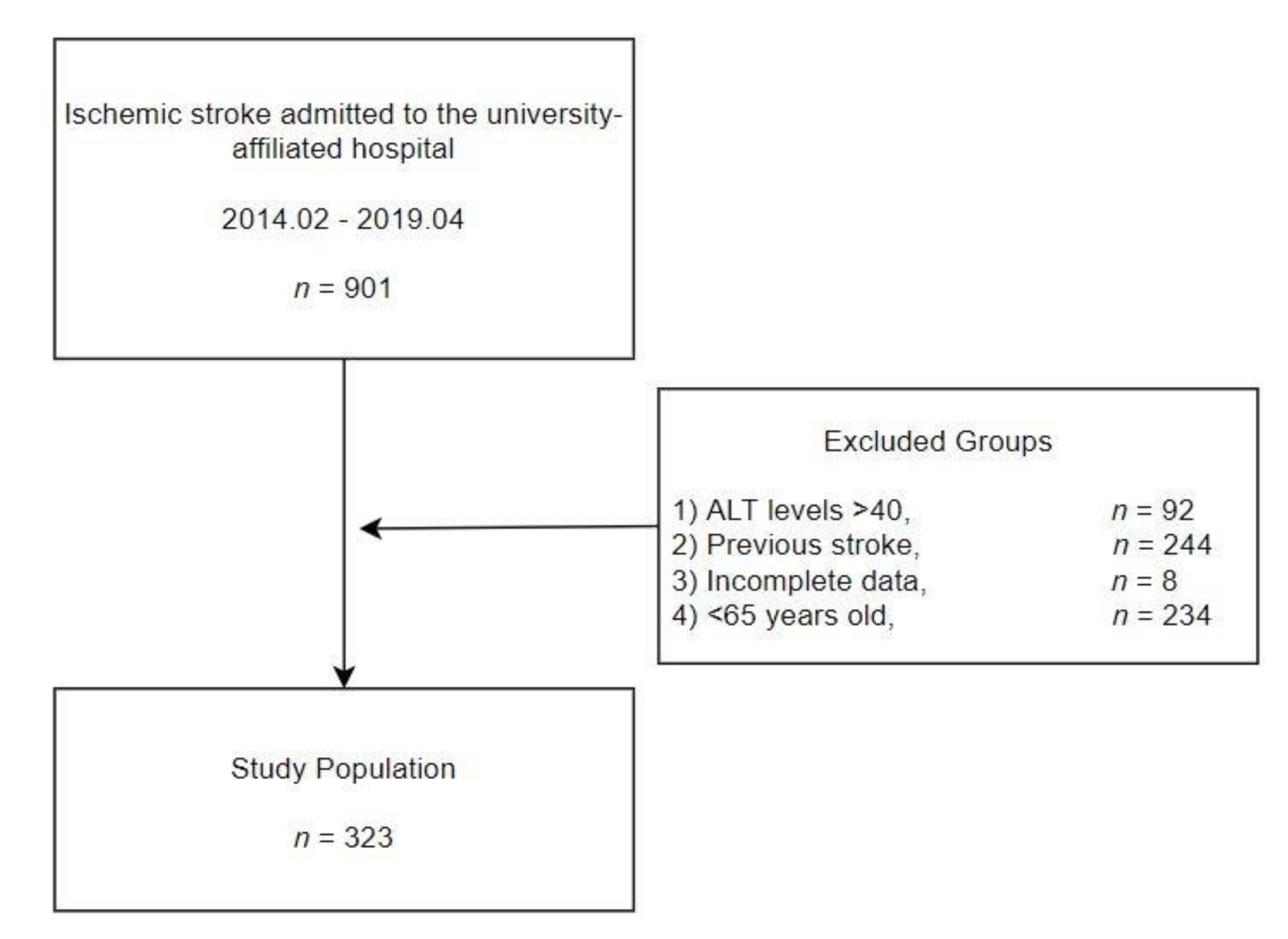