Acrylamide in Bakery Products: A Review on Health Risks, Legal Regulations and Strategies to Reduce Its Formation
Previous Article in Journal

Municipal solid waste (MSW) can pose a threat to public health if it is not safely managed. Despite prior research, uncertainties remain and refurbished evidence is needed along with new approaches. We conducted a systematic review of recently published literature to update and expand the epidemiological evidence on the association between MSW management practices and resident populations’ health risks. Studies published from January 2005 to January 2020 were searched and reviewed following PRISMA guidelines. Eligible MSW treatment or disposal sites were defined as landfills, dumpsites, incinerators, waste open burning, transfer stations, recycling sites, composting plants, and anaerobic digesters. Occupational risks were not assessed. Health effects investigated included mortality, adverse birth and neonatal outcomes, cancer, respiratory conditions, gastroenteritis, vector-borne diseases, mental health conditions, and cardiovascular diseases. Studies reporting on human biomonitoring for exposure were eligible as well. Twenty-nine studies were identified that met the inclusion criteria of our protocol, assessing health effects only associated with proximity to landfills, incinerators, and dumpsites/open burning sites. There was some evidence of an increased risk of adverse birth and neonatal outcomes for residents near each type of MSW site. There was also some evidence of an increased risk of mortality, respiratory diseases, and negative mental health effects associated with residing near landfills. Additionally, there was some evidence of increased risk of mortality associated with residing near incinerators. However, in many cases, the evidence was inadequate to establish a strong relationship between a specific exposure and outcomes, and the studies rarely assessed new generation technologies. Evidence gaps remain, and recommendations for future research are discussed. View Full-Text
Keywords: MSW; public health; epidemiology; PRISMA guidelines MSW; public health; epidemiology; PRISMA guidelines
►▼ Show Figures 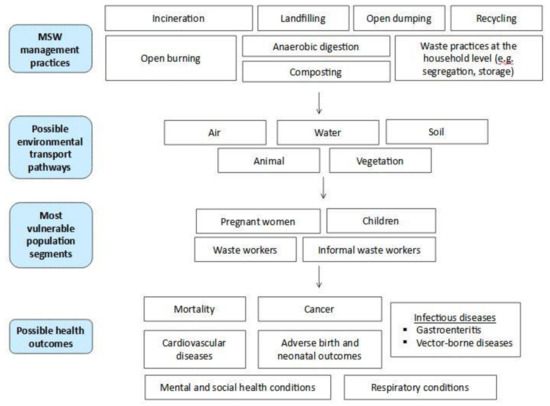