Globally, stroke was the second leading cause of death in 2017 [1], accounting for nearly 11% (6.2 million) of total deaths [2]. In China, stroke was the leading cause of death in recent years [3,4]. However, whereas symptomatic stroke is relatively easily recognized clinically, asymptomatic brain infarcts are often ignored [5]. Brain infarcts (BI) are commonly found in people who undergo magnetic resonance imaging (MRI) examinations and the prevalence of these infarcts was reported in 8–28% of participants in previous studies [6]. Most MRI-defined BI are asymptomatic and are not associated with stroke symptoms [7], but are considered a precursor of symptomatic stroke and may be associated with dementia [8,9,10]. Due to a lack of effective therapies for stroke and dementia, it is critical to evaluate risk factors to prevent or delay the occurrence of MRI-defined BI. Ambient air pollution is a major public health concern worldwide, especially in lowand middle-income countries [11]. According to the Global Burden of Diseases Study (GBD) 2019, 11.3% (2.92 million) of all women’s deaths and 12.2% (3.75 million) of all men’s deaths were attributable to air pollution [12]. Ambient air pollution also has various adverse health effects. The GBD 2013 showed that air pollution contributed 29.2% of stroke burden [11], and the literature reveals that air pollution was associated with brain health and central nervous system diseases [13,14]. Although previous studies linked genetic and lifestyle risk factors with stroke and MRI-defined BI [7,15], evidence regarding the associations of ambient air pollutants with MRI-defined BI is limited [16,17,18]. Previous observational studies were conducted in high-income countries with relatively good air quality but the results were inconsistent [16,17,18]. In addition, the sample size of these studies was relatively small (N < 2000) [16,17,18]. There are no studies on the association of air pollution with MRI-defined BI in China. Understanding the association of air pollution and MRI-defined BI is critical for prioritizing action to prevent stroke and dementia in China and globally, as well as for the management of air pollution. Therefore, in this study, we investigated the associations of air pollutants and MRIdefined BI using data from routine health examinations covering 174 cities in 30 provinces of China.

Data on concentrations of particulate matter (PM)2.5, PM10, nitrogen dioxide (NO2), and carbon monoxide (CO) were obtained from China’s National Urban Air Quality Realtime Publishing Platform during 2015–2017, periods just prior to the study. For each city, average annual concentrations of PM2.5, PM10, NO2, and CO were estimated by averaging the concentrations from 2015 to 2017. The monitoring data have been extensively used in China, and the details of data collection are described in previous studies [19,20].

All participants underwent MRI examinations, adhering to a standardized scan protocol. We used axial T1 weighted images, T2 weighted images, proton density weighted images or fluid -attenuated inversion recovery sequences on 1 T or 1.5 T MRI scanners (more than 85% of MRI scanners are 1.5 T scanners). All MRI scans were assessed by two experienced radiologists and disagreements were solved by consensus through discussion. MRI-defined BI was defined as an area of abnormal signal intensity that lacked mass effect with a size ≥3 mm in diameter [7,21].

Demographic characteristics, anthropometric parameters, blood samples, and medical histories for each participant were collected by trained health professionals during the health examinations. Data on the gross domestic product (GDP) per capita were collected from the China Statistical Yearbook for 2017. The daily mean air temperature and relative humidity in 2018 were derived from the China Meteorological Data Sharing Service System (http://data.cma.cn/) (accessed on 12 April 2021). The average smoking rate was extracted from a national survey of smoking prevalence published in Lancet Respiratory Medicine [22]. Hypertension was defined as systolic blood pressure ≥140 mm Hg, or diastolic pressure ≥90 mm Hg, or a history of hypertension. Diabetes was determined by a fasting level of plasma glucose ≥7.0 mmol/L or a history of diabetes. Dyslipidemia was defined as having any of the following: triglyceride level ≥2.3 mmol/L, total cholesterol level ≥6.2 mmol/L, high-density lipoprotein cholesterol level <1.0 mmol/L, low-density lipoprotein cholesterol level ≥4.1 mmol/L, or a history of dyslipidemia. Fat liver disease was detected by ultrasonography, performed by experienced technicians. Atrial fibrillation was identified by the examination of electrocardiograms. Renal disease was defined according to an estimated glomerular filtration rate of <60 mL/min/1.73 m2 [23].

The characteristics of study participants according to MRI-defined BI were compared using analysis of variance (ANOVA) and the chi-squared test for continuous and categorical variables, respectively. We computed Spearman correlation coefficients for four air pollutants (PM2.5, PM10, NO2, and CO) and meteorological variables. Multivariate logistic regression models were used to estimate the associations between air pollutants and MRIdefined BI. When air pollutants were considered as continuous variables, we also report the odds ratios (ORs) and 95% CIs of MRI-defined BI for each 1 SD increase in the concentrations of air pollutants. We specified three incremental models that sequentially adjusted for potential risk factors of MRI-defined BI. First, we adjusted for age (continuous) and sex. We also adjusted for city-level gross domestic product (GDP). Next, we adjusted for temperature. The final model (model 4) was considered as the main model and further used in subgroup analyses and sensitivity analyses.
We conducted subgroup analyses to estimate whether the associations between air pollutants and MRI-defined BI varied by age (<65, ≥65 years old) and sex. We tested the interactions in the final model. To test the robustness of the results, we also conducted sensitivity analysis by further adjusting for the relative humidity, or further adjusting for the province-level average smoking rate, or further adjusting for the individual body mass index (<18.5, 18.5–23.9, 24.0–27.9, ≥28.0 kg/m2), hypertension, diabetes, dyslipidemia, atrial fibrillation, fatty liver disease, and renal disease.
In addition, we used restricted cubic splines to flexibly model the associations of air pollutants with MRI-defined BI. In the cubic spline models, we adjusted for age, sex, citylevel GDP, and temperature.
All analyses were performed using SAS 9.4 (SAS Institute, Cary, NC, USA) and R version 3.6 (http://www.r-project.org/) (accessed on 12 April 2021). Statistical significance was defined as two-sided p < 0.05.

The characteristics of the study participants are shown in Table 1. A total of 1,400,503 participants were included in the study. The locations and city-level characteristics of the 174 cities are shown in Supplementary Figure S1 and Supplementary Table S1. Of the study participants, 95,671 participants (6.8%) were found to have brain infarcts in MRI scans. The mean age of study participants was 46.4 (SD 12.4) years and the mean age of participants with MRI-defined BI was 58.8 (SD 10.4) years. Compared with those without MRI-defined BI, participants with MRI-defined BI were more likely to be men, older, overweight or obese, and had higher prevalence of hypertension, diabetes, and dyslipidemia (all p < 0.001; Table 1).
The mean (SD) concentrations of air pollutants were 51.12 (15.61) μg/m3 for PM2.5, 88.93 (30.08) μg/m3 for PM10, 35.98 (10.07) μg/m3 for NO2, and 1.07 (0.29) mg/m3 for CO. These air pollutants generally had a moderate to high correlation with each other (Table 2).
The associations between exposure to air pollutants and MRI-defined BI are shown in Table 3. The adjusted OR (95% CI) for MRI-defined BI was 2.00 (1.96–2.03) for PM2.5, 1.68 (1.65–1.71) for PM10, 1.58 (1.55–1.61) for NO2, and 1.57 (1.54–1.60) for CO, comparing the highest with the lowest tertiles of air pollutant concentrations. Each 1 SD increase in air pollutants was associated with increased risk of MRI-defined BI; the adjusted ORs (95% CIs) for PM2.5, PM10, NO2, and CO were 1.42 (1.40–1.43), 1.35 (1.34–1.36), 1.28 (1.27– 1.29), and 1.30 (1.29–1.31), respectively (Table 3).
Restricted cubic splines were used to visualize the associations between air pollutants and MRI-defined BI (Figure 1). Consistent with the findings of our primary analysis, we observed that the risk of MRI-defined BI increased with higher concentrations of PM2.5, PM10, NO2, and CO based on the cubic spline models.
In the exploratory subgroup analyses, the associations between air pollutants and MRI-defined BI were significant in all subgroups, though the associations were stronger in older age groups. This difference was also found in a stratified analysis by sex for the association between PM2.5 and CO and MRI-defined BI, with a stronger association observed in men (Table 4).
The results were generally robust in sensitivity analyses by further adjusting for the relative humidity, or further adjusting for the average smoking rate, or further adjusting for the body mass index, hypertension, diabetes, dyslipidemia, atrial fibrillation, fatty liver disease and renal disease (Table 5).

In conclusion, we found that exposure to air pollutants (PM2.5, PM10, NO2, and CO) was associated with the risk of MRI-defined BI.

Individual informed consent was waived due to only anonymous information was used in the study.

All data used to support the findings of this study may be released upon application to the Meinian Institute of Health (Beijing, China), which can be contacted through Yi Ning (email: [email protected]).

We thank all study participants and appreciate the contributions made by Shijun Li and all health professionals in health screening centers. 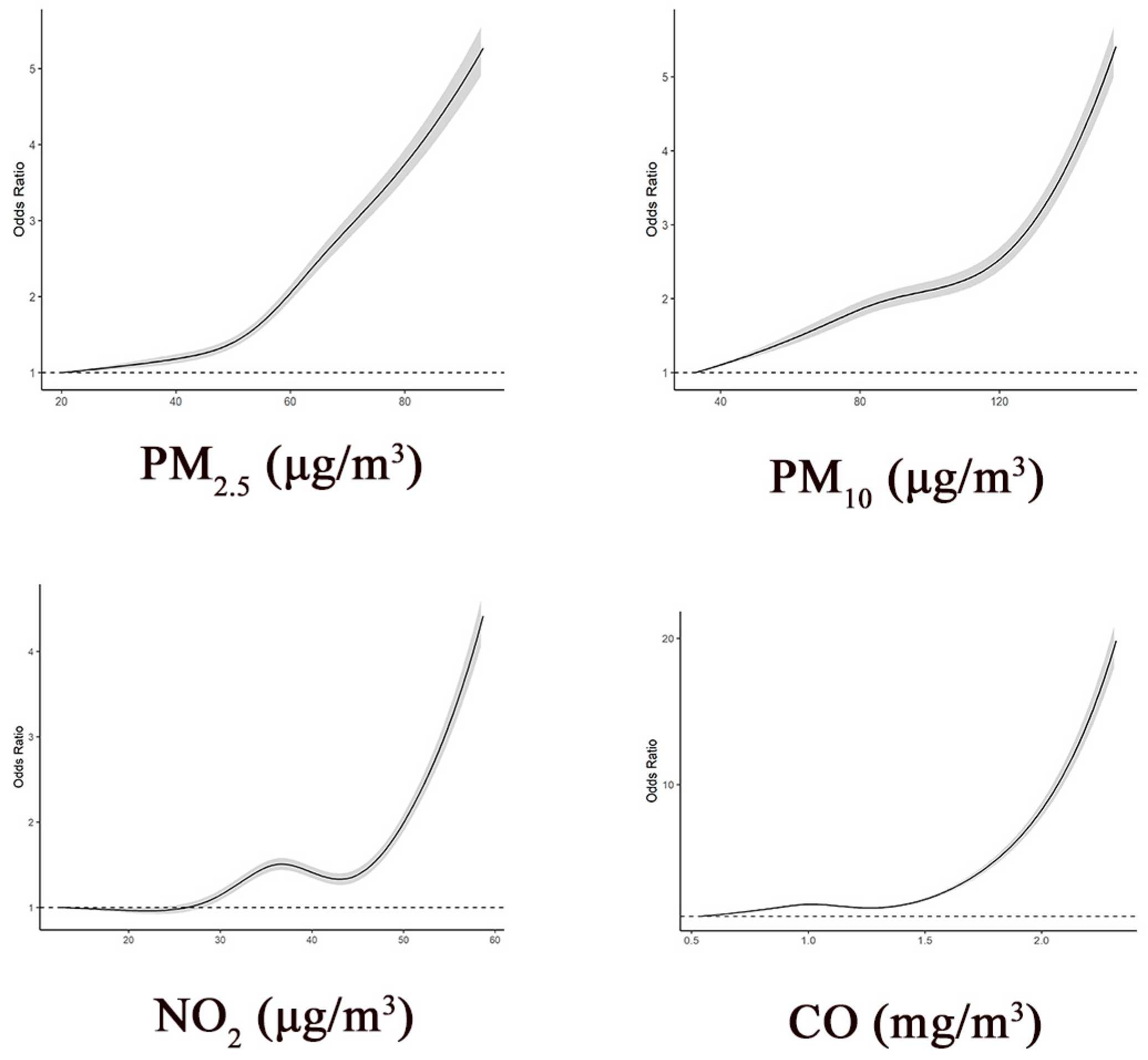