Adherence Is More Than Just Being Present: Example of a Lay-Led Home-Based Programme with Physical Exercise, Nutritional Improvement and Social Support, in Prefrail and Frail Community-Dwelling Older Adults
Previous Article in Special Issue

Factors Associated with Practice of Chemical Pesticide Use and Acute Poisoning Experienced by Farmers in Chitwan District, Nepal

In view of increasing irrational use and unsafe handling of pesticides in agriculture in Nepal, a descriptive cross-sectional study was conducted to assess the practice of chemical pesticide use and acute health symptoms experienced by farmers. A total of 790 farmers from the Chitwan district were randomly selected for the study. X2 test, T-test, and Multiple Logistic Regression were used for analysis. Among the farmers, 84% used exclusively chemical pesticide. Farmers with better knowledge on pesticide handling were 8.3 times more likely to practice safe purchasing, four times more likely to practice safe mixing and spraying, and two times more likely to practice safe storage and disposal. Similarly, perception/attitude of farmers about chemical pesticide policy and market management was significantly associated with the practice of farmers during purchasing, mixing and spraying, and storage and disposal. Among the users of chemical pesticides, 18.7% farmers experienced one or more pesticide related acute symptoms of health problems during the previous 12 months. Farmers with unsafe practices of pesticide handling were two times more likely to suffer from acute poisoning. It is concluded that knowledge about pesticide handling and favorable perception/attitude on pesticide policy and market management are the predictors of safe use of pesticide. View Full-Text
Keywords: pesticides; safety measures; acute poisoning; Nepal pesticides; safety measures; acute poisoning; Nepal
►▼ Show Figures 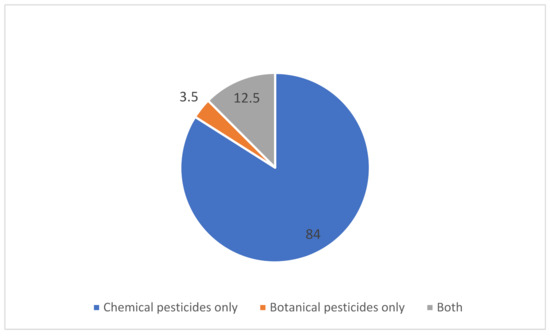