Surveillance for Severe Acute Respiratory Infections among Hospitalized Subjects from 2015/2016 to 2019/2020 Seasons in Tuscany, Italy
Previous Article in Special Issue

Study on Characteristics of Particulate Matter Resuspension in School Classroom through Experiments Using a Simulation Chamber: Influence of Humidity

Effects of Vehicle Load on Emissions of Heavy-Duty Diesel Trucks: A Study Based on Real-World Data

Vehicle loads have significant impacts on the emissions of heavy-duty trucks, even in the same traffic conditions. Few studies exist covering the differences in emissions of diesel semi-trailer towing trucks (DSTTTs) with different loads, although these vehicles have a wide load range. In this context, the operating modes and emission rates of DSTTTs were analyzed under varying loads scenarios to understand the effect of vehicle loads on emission factors. First, second-by-second field speed data and emission data of DSTTTs with different loads were collected. Then, the methods for calculating the scaled tractive power (STP) and the emissions model for DSTTTs were proposed to evaluate the effect of different loading scenarios. The STP distributions, emission rate distributions, and emission factor characteristics of different loaded trucks were analyzed and compared. The results indicated that the STP distributions of DSTTTs that under the unloaded state were more narrow than those under fully loaded or overloaded conditions. The emission rates of carbon dioxide (CO2), carbon monoxide (CO) and total hydrocarbon (THC) for DSTTTs under a fully loaded state were significantly higher than those under an unloaded state. However, due to the influence of exhaust temperature, the emission rates of nitrogen oxides (NOx) among fully loaded trucks were lower than those under the unloaded state when STP bin was above 4 kW/ton. The emission factors of CO2, CO, THC, and NOx for fully loaded trucks demonstrated the largest increases at low-speed intervals (0–30 km/h), which rose by 96.2%, 47.9%, 27.8%, and 65.2%, respectively.
Keywords: diesel semi-trailer towing trucks; vehicle load; STP distribution; emission rates; emission characteristics diesel semi-trailer towing trucks; vehicle load; STP distribution; emission rates; emission characteristics

Due to the limitation of data acquisition conditions, vehicle data were obtained in two ways. One method was the acquisition of second-by-second activity data of the DSTTTs, which was used to study the operation difference between various load states under the same traffic modes; the other method was by gathering vehicle emissions data, which was used to establish an emission rate model to analyze the differences in emission rates among trucks with varying loads.
A total of 10 DSTTTs were identified in Shandong Province to gather second-by-second operating speed data using OBD devices to study STP distribution characteristics for DSTTTs under different loads. The speed data collected for this study covered three conditions: unloaded, fully loaded, and overloaded. The payloads information of DSTTTs was obtained from a weighbridge prior to each test. The test vehicle information was listed in Table 1. The gathered activity data included 1,692,632 records of second-by-second DSTTTs trajectories under the unloaded condition, 1,454,043 records under the fully loaded condition, and 452,502 records under the overloaded condition. Study data were collected from 28 March 2020, to 10 June 2020.
Meanwhile, truck emissions data were collected using a PEMS instrument (HORIBA OBS-ONE, Japan) from 23 August 2018 to 10 September 2018, in Heibei province. The emissions data collected covered the unloaded condition and fully loaded condition. The detailed information on DSTTTs used for emissions testing is provided in Table 2. The DSTTTs weights were roughly 14.5 tons for unloaded trucks and 49.0 tons for fully loaded vehicles. The quality control of the collected data was carried out through speed and acceleration. One was to eliminate data with a speed exceeding 120 km/h, and the other was to filter the data by using the 98% acceleration distribution quantile as the threshold. After rigorous data quality control procedures, a total of 153,215 valid second-by-second emissions data were retained, including 101,432 records for empty trucks and 51,783 records for fully loaded trucks.

After controlling for data quality, the interval of 2 km/h was used to divide the speed bin and the time proportion of samples in each speed interval analyzed. As shown in Figure 2, the average speeds of unloaded, fully loaded, and overloaded trucks were 48.68 km/h, 60.45 km/h, and 45.39 km/h, respectively. The speed distribution of unloaded trucks was more scattered and the time proportion of samples in each speed bin below 92 km/h exceeded 1%. There were three peaks in the speed distribution for the unloaded trucks, which were 2 to 4 km/h, 62 to 64 km/h, and 88 to 90 km/h, respectively. This speed distribution could be explained by the idea that trucks queuing up to load in a logistics park led to long-term low-speed operation, while unloaded vehicles typically use unrestricted access roads to get to closer loading points, resulting in vehicles in medium speed operation, or using restricted access roads to return from further destinations after unloading to make them operating at a relatively high speed. Fully loaded trucks operated mainly in the speed ranges of 58 to 88 km/h. This situation is likely because the trucks reached their destination via the restricted access roads after loading cargo. Finally, the speed data of overloaded trucks were more concentrated than those with the no-load and a full load. The overloaded vehicles mainly operated in the speed range of 42 to 66 km/h and there was relatively limited operation data available in the high-speed range. These trucks typically drive on unrestricted-access roads to avoid administrative penalties and, due to vehicle performance limitations and driver safety considerations, the operating speed of such overloaded trucks was relatively low.
A time-alignment error typically existed in data streams from the exhaust gas collection system and the global positioning system or OBD devices’ speed recorder. In this study, different data sources were used to calculate STP and emission rates and there was a time lag reflecting different operating modes of the vehicle at the same time. For example, in Figure 3, the CO2 emission data of trucks lagged the operating speed at the same time. This study presumed that the time of the STP was considered as the basic timeline in the calibration method. Then, the time alignment sequence was readjusted based on the maximum correlation coefficient between the STP and emission data. It should be emphasized that the various pollutants must be modified individually with operating speed due to discrepancies in time-alignment errors for different pollutants. The consistency of CO2, CO, THC, NOx and STP values were significantly improved following correction for time-alignment error.

To avoid the impact of road slope on the analysis of truck activity loads, sloped roads, both uphill and downhill with slopes exceeding 1.5%, were marked during the data quality control process. These tagged data were then excluded when performing data analysis to calculate STP values. The formula was calculated using Equation (1) as follows without the parameter of road gradient: where STPt = STP value at time t (kW/ton), vt = operating speed at time t (m/s), at = transient acceleration of truck operation at time t (m/s2), m = gross truck weight (tons), A = rolling resistance coefficient (kW-s/m), B = rotational resistance coefficient (kW-s2/m2), C = aerodynamic drag coefficient (kW-s3/m3), and fscale = scaling factor, with a fixed value of 17.1 being suggested [27].
As shown in Equation (1), the A, B, and C were constant for a specific vehicle type. Moreover, the speed, acceleration, and gross vehicle weight determined its calculated STP values. Therefore, for the same operation mode, an increase of m led to a proportional increase in STP values. In this study, the values of m used for calculating STP values for DSTTTs that were unloaded, fully loaded, and overloaded were 14.5 tons, 49.0 tons, and 61.5 tons, respectively. The method for obtaining the STP distribution and emission rates under different loads was as follows:

(1)
Calculating second-by-second STP values of trucks under unloaded, fully loaded, and overloaded conditions using Equation (1) where the value of m was selected according to each load state.
(2)
Clustering STP values to obtain the STP Bins, and those values were divided into various bins defining the equivalent interval as 1 kW/ton, as shown in Equation (2):

where STP Bin # = ID of the STP pool, and n = an integer
Obtaining STP distributions by computing the time percentage in each STP bin within a defined speed interval for unloaded, fully loaded, and overloaded trucks. The continuous speed data were divided into trajectories, each consisting of 60 consecutive seconds of operating data. The average speed was calculated for each trajectory using Equation (3). Then, the trajectories were put into trajectory pools with specific speeds based on their average speed. Meanwhile, the specific-speed trajectory pool was defined by the speed bin with an equal spacing of 2 km/h, as shown in Equation (4):
The mean and standard deviation were calculated separately for each pollutant in the STP Bin. The mean value plus and minus three times the standard deviation was used as the threshold value within each STP bin to ensure that the second-by-second emission rate data were within the corresponding threshold values. After removing abnormal data, the average emission value in each STP bin was taken as the pollutant’s emission rate. The average emission rate was calculated using Equation (5) as follows: where ERij= average emission rate of emission i in STP bin j (g/s), ERijn = the n-th measured value of emission i in STP bin j (g/s), and Nij = the amount of data of emission i in STP bin j.

2.3. The Calculation Method of Emission Factor Based on STP Distribution and Emission Rate

3.3. Characteristics of Emission Factors for DSTTTS under Different Loading Conditions

STP distribution and emission rates are crucial factors affecting the emission of DSTTTs under different load states. An emission model of DSTTTs under different load states was established according to the field operating data collected by OBD and the emissions data obtained by PEMS. This study refined the STP computing method according to the load, making it practicable to analyze emissions for on-road trucks with various load states in the same traffic scenarios. Differences in STP distributions, emission rates, and emission factors for DSTTTs at various loads were analyzed. The most significant findings from this study can be summarized as follows:

The emissions model proposed in this study is able to evaluate the differences in emission associated with various loading conditions and provided a potential method to adjust vehicle emissions according to load weight and traffic conditions. However, this study failed to obtain emissions data of DSTTTs in an overloaded state, and the effect of road type on DSTTTs’ emissions has not been discussed. It is necessary to conduct a more in-depth study on more fine-grained load states and road types in the future.

The authors would like to thank the Key Laboratory of Transport Industry of Big Data Application Technologies for Comprehensive Transport and State Environmental Protection Key Laboratory of Vehicle Emission Control and Simulation (VECS) for providing the vehicle emissions and operational data. 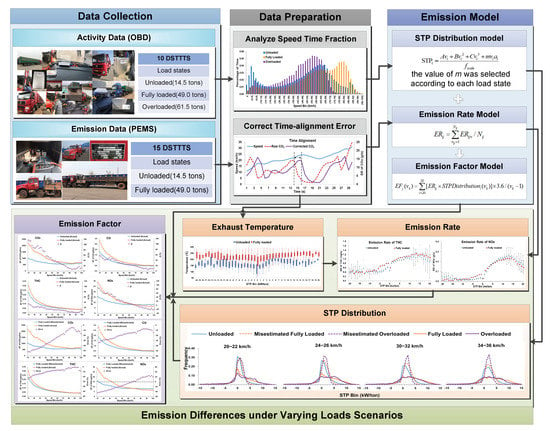 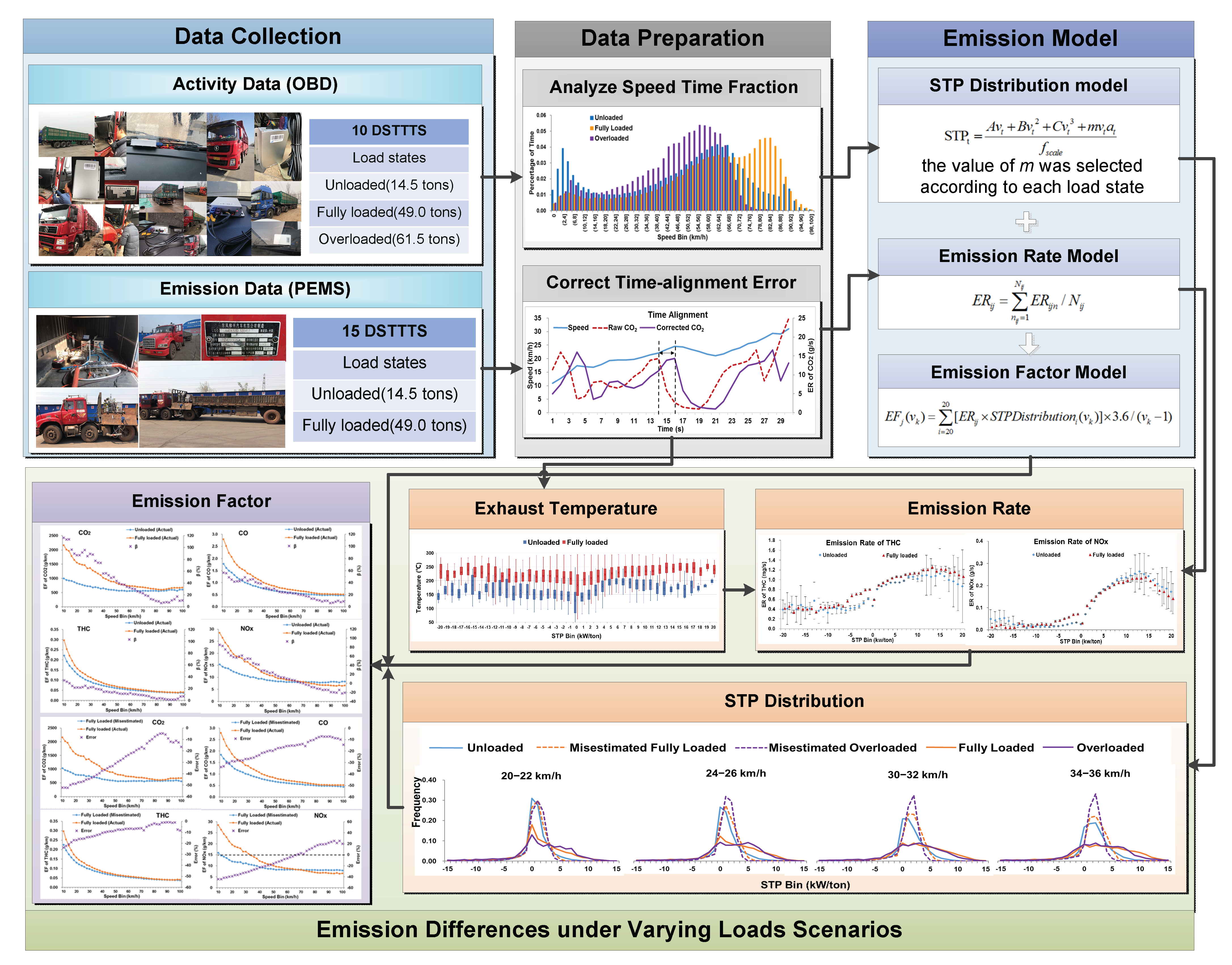 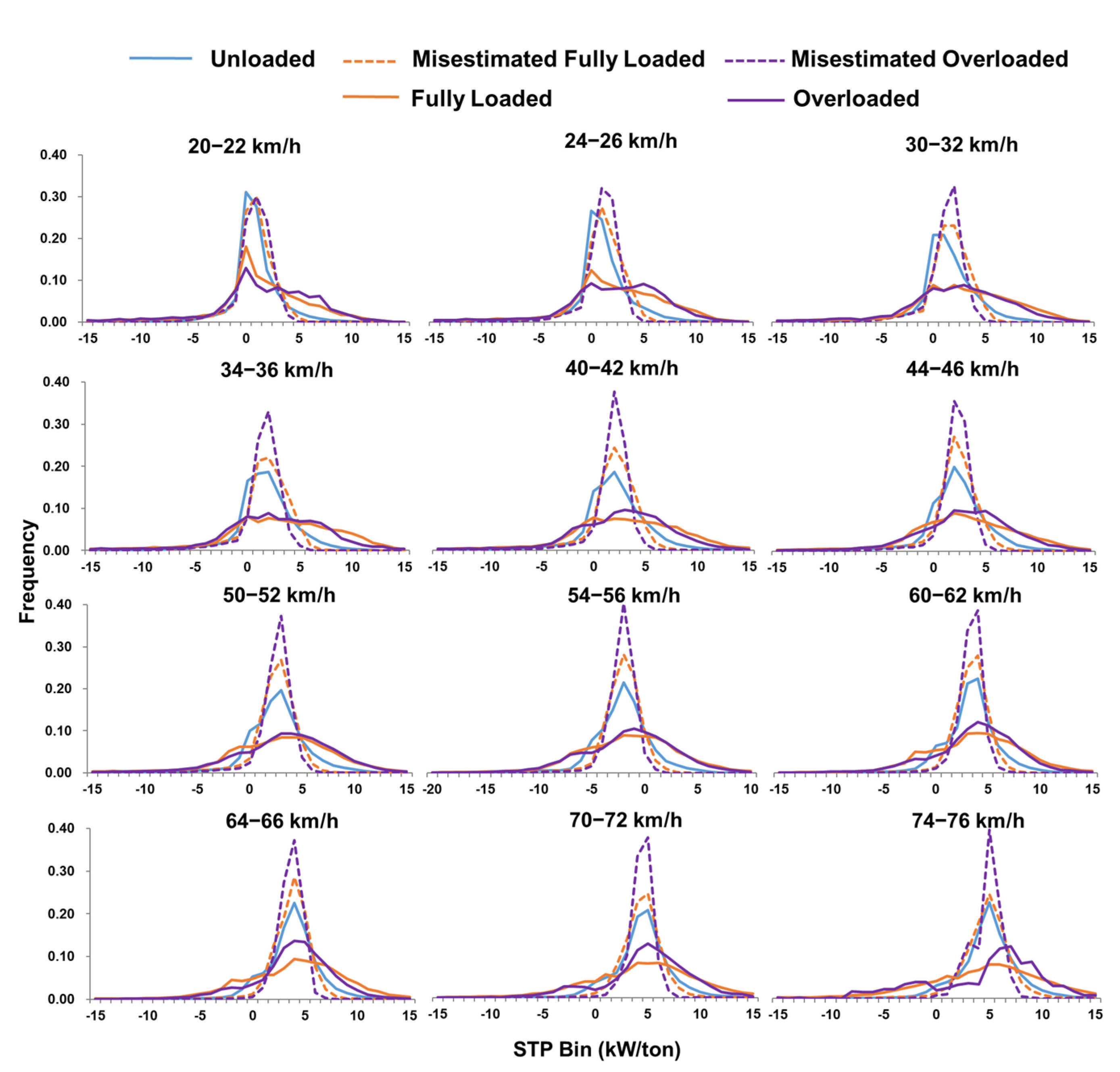 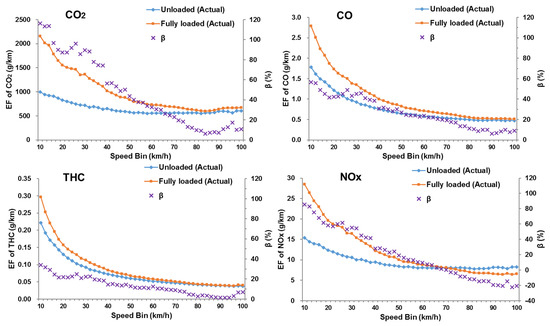 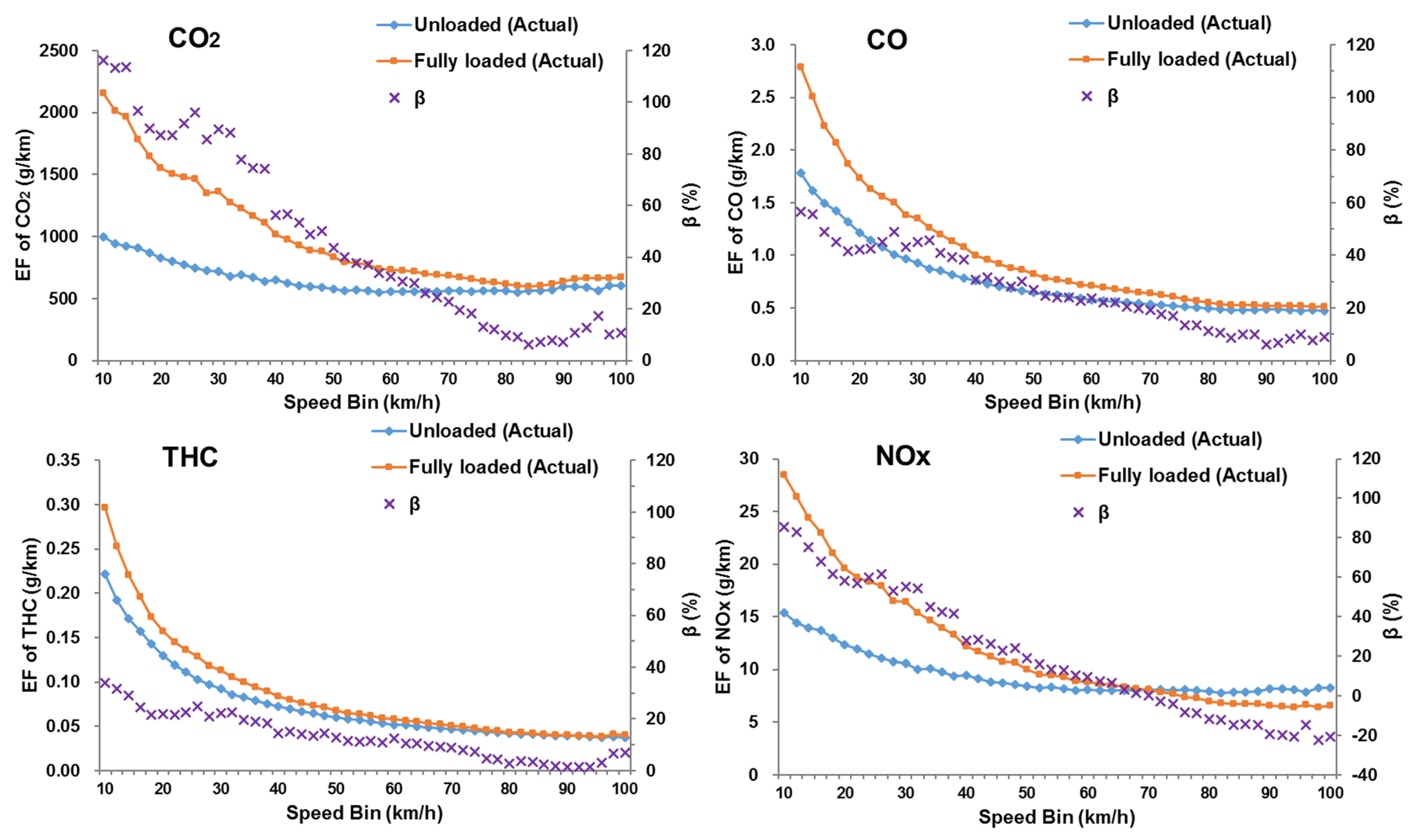 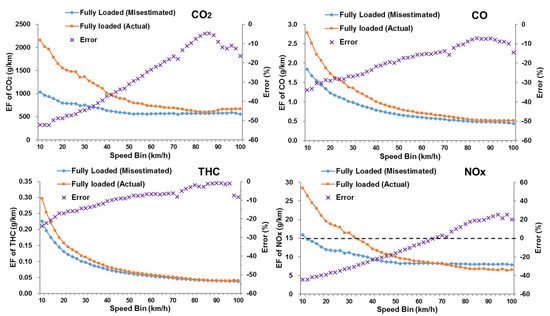