The Impact of Dietary Knowledge on Health: Evidence from the China Health and Nutrition Survey
Next Article in Special Issue

The participants—25 elderly people (65–79 years) living in urban apartment houses in the city of Lahti, Finland—were chosen from a large prospective study called GOAL (Good Aging in Lahti region, 2002–2012). The original GOAL study aimed to find connections between the living environment and chronic diseases and functional disabilities in the elderly and retired population [58]. In 2015, 60 GOAL participants were invited to participate in a follow-up study (2015–2016). In the follow-up study, stool samples for microbial analysis and survey data were collected [23,25]. Twenty-five participants from the follow-up study living in urban areas were included in this pilot study, and 10 of them were rural-second-home users. The second-home users were asked to report the number of years they had been using a second home, the number of visiting days per year, and how much time was usually spent outdoors vs. indoors (Table 1).
All participants with at least one of the following noncommunicable diseases (NCDs, also known as chronic diseases) affecting the immune response were excluded in the 2015 follow-up study: celiac disease, rheumatoid arthritis, chronic obstructive pulmonary disease, diabetes, psoriasis, multiple sclerosis, corticosteroid-treated asthma, chronic obstructive pulmonary disease, and actively treated or metastatic cancer. Daily smokers and participants with dementia or treated with corticosteroid and other immunosuppressive medication were also excluded. If the participants were treated with antibiotics within the last six months before giving the stool samples, they were excluded. None of the participants owned pets with access to the outdoors.

In this study, stool samples collected in August 2015 were analyzed (see [23], Supplementary Figure S2 for a flowchart describing the sample collection and subsequent processes). Samples collected in August were used because the summer vacation season is the peak rural-second-home season in Finland and because exposure to environmental microbiota among aging Finns is high during the summer months [56]. Sample collection, DNA extraction, and amplicon sequencing were described in our previous study [44]. In short, participants took the samples independently using a collection kit and stored them at −20 °C until the samples were collected by the study personnel. The samples were transferred in dry ice and stored at −80 °C until further analyses. DNA was extracted from 30 to 60 mg of frozen, unprocessed stool, and bacterial community analyses were based on the amplification of the V4 region of 16S rRNA. Raw sequence reads are available in the Sequence Read Archive (https://www.ncbi.nlm.nih.gov/sra accessed on 31 March 2021) with accession numbers SAMN08991885–SAMN08992045.

Paired-end sequence data (.fastq) from the stool samples were processed using Mothur (version 1.39.5, http://www.mothur.org accessed on 31 March 2021) [59], as described in our earlier studies [23,44], following the protocols by Schloss and Westcott [60] and Kozich et al. [61]. The sequences were aligned using the Mothur version of SILVA bacterial reference (version 132) [62]. Less abundant (≤10 sequences across all experimental units) operational taxonomic units (OTUs) were removed to avoid PCR or sequencing artifacts [63]. Each sample was subsampled to 4024 sequences to control for the varying number of sequences.
The 16S rRNA OTU data were picked against the Greengenes Database [64] according to 97% similarity, and the OTU table was used to predict metabolic functions by referencing the Kyoto Encyclopedia of Genes and Genomes (KEGG) ortholog database (release 89.0) in PICRUSt (http://picrust.github.io/picrust/ accessed on 31 March 2021) [65].

Statistical analyses were conducted for the whole bacterial community at different taxonomic levels (i.e., OTU, family, order, class, and phylum) and for the functional orthologs. At the OTU level, analyses were conducted within the most abundant dominant gut phyla and predominant colon families (Table 2); p-values were corrected with Benjamini–Hochberg correction to account for the multiple testing [66].
The Shannon and Simpson diversity indices, observed richness, and predicted functional orthologs of the bacterial communities were compared between the rural-second-home users and the control group using the Student’s t-test or Mann–Whitney U test. The Student’s t-test was used when the data were normally distributed based on the Shapiro–Wilk test, and the Mann–Whitney U test was used when the data were not normally distributed.
Differences in the bacterial community composition between the groups were compared using permutational multivariate analysis of variance (PERMANOVA; 999 permutations). The bacterial community compositions were visualized with non-metric multidimensional scaling (NMDS). Both PERMANOVA and NMDS were based on the Bray–Curtis dissimilarity. All statistical analyses and data visualization were performed using the R statistical software environment (version 4.0.3, R Foundation, Vienna, Austria) [68] and the packages phyloseq (version 1.32.0) [69], ggplot2 (version 3.3.2) [70], and vegan (version 2.5-6) [71].

3.1. Characterization of the Bacterial Communities

Based on Illumina MiSeq sequencing of the bacterial 16S rRNA gene, the most common bacterial phyla in the stool samples of the rural-second-home users and the control group were Firmicutes, Bacteroidetes, Proteobacteria, and Actinobacteria (Figure 1).

3.2. Diversity of the Bacterial Communities

The permutational analysis of variance (PERMANOVA) revealed that the fecal bacterial community compositions did not differ between the rural-second-home users and the control group at the OTU (Figure 3) or any other taxonomic level (Table 4).
According to the predicted gut metagenomic functions, the fecal microbiota of the rural-second-home users showed lower levels of RIG-I-like receptor signaling pathway than the control group (p = 0.019). No other differences in the functional orthologs were observed (p > 0.1, except for endocytosis (p > 0.006); data not shown).

This study was conducted according to the guidelines of the Declaration of Helsinki and approved by the Ethics Committee of Tampere University Hospital (approval code R15044).

We would like to thank all the ADELE team members for their support, volunteers for participating in the study, CSC—IT Center for Science, Finland, for computational resources, and personnel at the Environmental Laboratory at the University of Helsinki for laboratory services. BEI Resources (American Type Culture Collection, ATCC) are also gratefully acknowledged for the Genomic DNA from Microbial Mock Community (HM-276D). 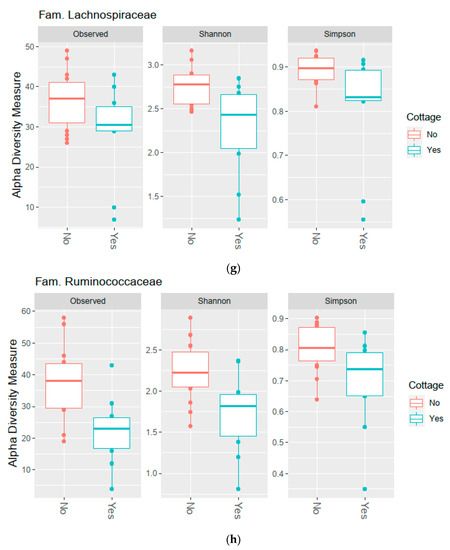