Bone metabolism and the trace element content associated with it change at each stage of degenerative disease. The aim of this study was to find out about the role of the analyzed elements in different stages of hip osteoarthritis. Elements associated with oxidative and enzymatic processes were analyzed depending on the changes in the radiological images of the hip joint. Element content analysis was performed by the inductively coupled plasma mass spectrometry analytical technique. The femoral head in severely osteoarthritic hips (KL3–4) compared to mild grade osteoarthritis (KL2) had a greater content of Cu (median 1.04 vs. 0.04), Sr (median 38.71 vs. 29.59), and Zn (median 75.12 vs. 63.21). There were no significant differences in the content of Mo, Cr, and Fe in the femoral head and neck between the groups. The Cu/Fe correlation was negative in the KL2 group (−0.47) and positive in the KL3–4 groups (0.45). Changes in the content and correlation of trace elements in the hip joint explain the changes in metabolism dependent on the severity of degenerative changes.
Keywords: trace elements; metalloproteinase; femoral bone; hip osteoarthritis stages; grades trace elements; metalloproteinase; femoral bone; hip osteoarthritis stages; grades

Osteoarthritis (OA) is a common disease that mainly involves cartilage destruction, synovial inflammation, osteophyte formation, and subchondral bone sclerosis [1,2]. The content of enzymatic and oxidative elements and their correlations in bone tissue have so far been analyzed in OA of the hip joints [3,4], knee joints [5,6], and intervertebral disc [7,8].
Enzymatic elements (Ca, Zn, Cu, and Mo) are cofactors of enzymes, e.g., metalloproteinases (MMPs), involved in the pathogenesis of degenerative joint lesions. Interleukin-1 beta (IL-1ß) and tumor necrosis factor alpha (TNF-α) stimulate the production of matrix-degrading enzymes such as disintegrin and thrombospondin motif metalloproteinases (ADAMTS) produced by macrophages, fibroblasts, and chondrocytes [1]. Degenerative changes depend on oxidative processes, which are necessary enzyme cofactors, such as superoxide dismutase (Cu and Zn), catalase (Cu and Fe), and various types of glutathione peroxidases (Se) [9].
The influence of the severity of degenerative changes on the content of metals and their correlation in femoral bone has not been investigated in humans. The aim of this study was to present the role of the analyzed elements in the pathogenesis of OA. This study will help indirectly show metabolic changes taking place in the bone in response to the progressive degenerative process.

The sample consisted of 58 patients who underwent total hip replacement (THR). All patients lived in the Greater Poland region of Poland, a region that has no major industry concentration [4]. Table 1 shows the characteristics of the patients enrolled in the study.
The inclusion criteria were age >60 years, primary OA, no exposure to environment pollution of air, water, or soil, and no contact with chemicals (i.e., fertilizers, plant protection arable, heavy metals, paints, adhesives, plaster, tannery articles, photographic chemicals, reagents used in metallurgy, other chemicals, and detergents). The interview of exposure to environmental pollutants was conducted with the use of a questionnaire completed during a hospital stay.
The exclusion criteria were secondary degenerative changes and hip fractures, history of cancer, liver or kidney failure, heart failure of class III or IV according to the New York Heart Association (NYHA), and taking drugs that affect bone metabolism, such as mineral supplements, neuroleptics, chemotherapeutic agents, immunosuppressive drugs, corticosteroids, or antidepressants.

2.2. Characterization and Sampling of Femoral Bone Samples and Determination the Elemental Metals

The bone samples were prepared based on the method described by Zioła-Frankowska et al. [10]. Directly after acquisition, the trabecular subchondral bone was separated from the femoral heads under sterile conditions. Samples were cut from the head and neck of the femur. In the case of the femoral neck, samples were collected with a patch section thickness of 1–2 mm, and a 5 mm slice was taken in the shape of a triangle. After preparation, the concentration of selected metals was determined using an ICP-OES spectrometer (VISTA-MPX; VARIAN, Victoria, Mulgrave, Australia).

All of the subjects included in this study were undergoing bilateral anteroposterior radiography of the hip. Two orthopedists, blinded to the subjects’ clinical symptoms, assessed the radiographs independently using the Kellgren–Lawrence (KL) radiographic system. Stage 2 is described as definite osteophyte formation with possible joint space narrowing; stage 3 as multiple osteophytes, definite joint space narrowing, sclerosis, and possible bony deformity; stage 4 as large osteophytes, marked joint space narrowing, severe sclerosis, and definite bony deformity. A participant was diagnosed with radiographic hip OA if at least one of the hip joints was graded as KL grade 2 or above. Two groups of patients were selected: Mild OA (KL2) and severe OA (KL3–4).

The analysis used Statistica software (Version 13.0, StatSoft Inc., Tulsa, OK, USA). To compare the impact of various environmental factors on the concentration of analyzed metals in the bone, we used a Mann–Whitney U-test (p < 0.05). In addition, we determined the Spearman’s rank correlation between the trace elements occurring in the materials and between the different studied metals in different stages of OA. Chemometric analysis was performed to evaluate variables from the independent assumption showing the mutual relationships between the analyzed factors by applying principal component analysis (PCA).

Our results indirectly confirm that there are differences in the metabolism of femoral bone depending on the severity of OA. We showed significant differences in the content of the five elements Cu, Zn, Sr, Mg, Ca, and P in the femoral head between mild and severe OA. The contents of metals and their correlations in various tissues can therefore be treated as a marker of oxidative stress and metabolic changes. Therefore, the correlations may indirectly explain the oxidative and enzymatic causes of the OA and investigate the mechanisms related to the formation of osteophytes and subchondral sclerosis.

This project was partly financed with funding received from the National Science Center in Poland (MINIATURA 2 2018), under grant agreement no. 2018/02/X/NZ5/03688.

The use of biological samples in this research was permitted by the Bioethical Committee of the University of Medical Sciences in Poznan (Poland) (permit no. 391/16), and all patients provided written informed consent prior to participation.

This data can be found at: https://1drv.ms/x/s!AmJVkCPyMge3kADmkGCWfaz6cPkq (accessed on 22 March 2021). 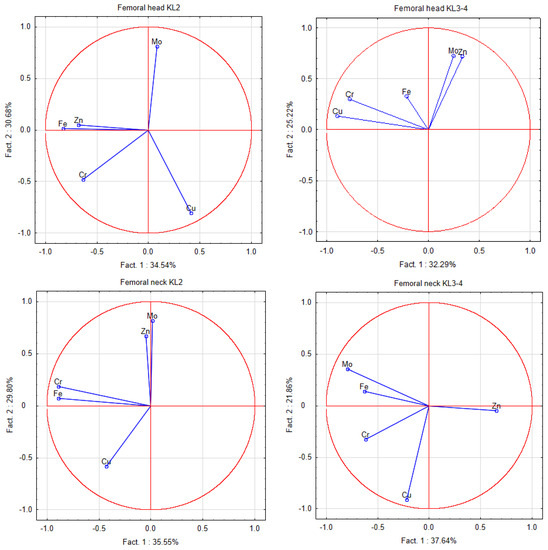 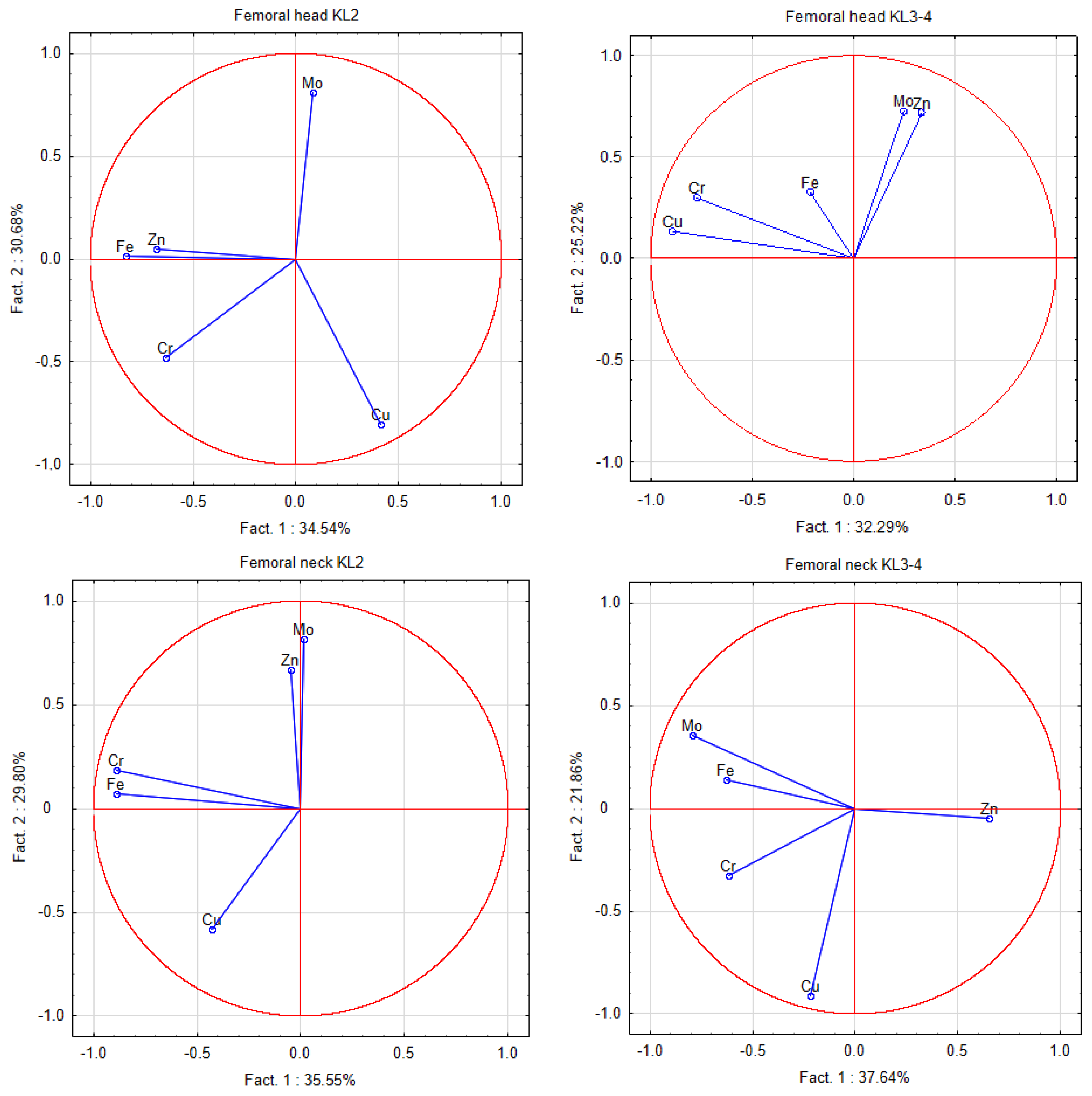