Vegetables, Potatoes and Their Products as Sources of Energy and Nutrients to the Average Diet in Poland
Next Article in Special Issue

Accuracy of a Smartphone Application Measuring Snoring in Adults—How Smart Is It Actually?
Previous Article in Journal

Analyses of Weight/Blood Pressure Changes before and after Tonsillectomy in Adults: A Longitudinal Follow-Up Study

Chronic tinnitus causes a decrease in well-being and can negatively affect sleep quality. It has further been indicated that there are clinically relevant gender differences, which may also have an impact on sleep quality. By conducting a retrospective and explorative data analysis for differences in patients with tinnitus and patients diagnosed with tinnitus and insomnia, hypothesized differences were explored in the summed test scores and on item-level of the validated psychometric instruments. A cross-sectional study was conducted collecting data from a sample of tinnitus patients (n = 76). Insomnia was diagnosed in 49 patients. Gender differences were found on aggregated test scores of the MADRS and BDI with men scoring higher than women, indicating higher depressive symptoms in men. Women stated to suffer more from headaches (p < 0.003), neck pain (p < 0.006) and nervousness as well as restlessness (p < 0.02). Women also reported an increase in tinnitus loudness in response to stress compared to men (p < 0.03). Male individuals with tinnitus and insomnia have higher depression scores and more clinically relevant depressive symptoms than women, who suffer more from psychosomatic symptoms. The results indicate a need for a targeted therapy of depressive symptoms in male patients and targeted treatment of psychosomatic symptoms, stress-related worsening of insomnia and tinnitus in women. View Full-Text
Keywords: tinnitus; insomnia; sleep; sleep disturbance; depression; gender difference tinnitus; insomnia; sleep; sleep disturbance; depression; gender difference
►▼ Show Figures 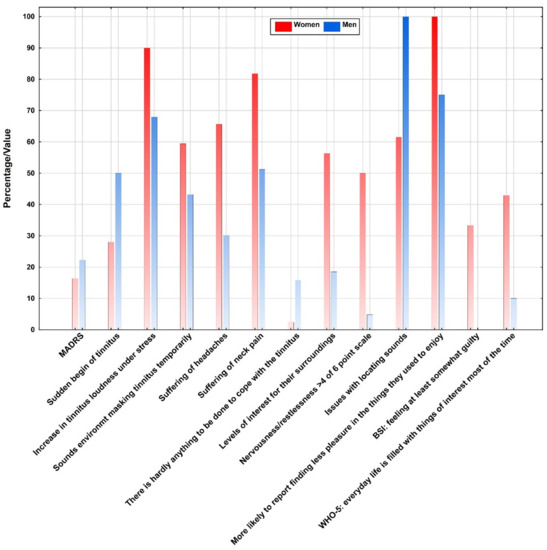