Microplastics: A Threat for Male Fertility
Previous Article in Journal

The past decades were witnessing unprecedented habitat degradation across the globe. It thus is of great significance to investigate the impacts of land use change on habitat quality in the context of rapid urbanization, particularly in developing countries. However, rare studies were conducted to predict the spatiotemporal distribution of habitat quality under multiple future land use scenarios. In this paper, we established a framework by coupling the future land use simulation (FLUS) model with the Intergrated Valuation of Environmental Services and Tradeoffs (InVEST) model. We then analyzed the habitat quality change in Dongying City in 2030 under four scenarios: business as usual (BAU), fast cultivated land expansion scenario (FCLE), ecological security scenario (ES) and sustainable development scenario (SD). We found that the land use change in Dongying City, driven by urbanization and agricultural reclamation, was mainly characterized by the transfer of cultivated land, construction land and unused land; the area of unused land was significantly reduced. While the habitat quality in Dongying City showed a degradative trend from 2009 to 2017, it will be improved from 2017 to 2030 under four scenarios. The high-quality habitat will be mainly distributed in the Yellow River Estuary and coastal areas, and the areas with low-quality habitat will be concentrated in the central and southern regions. Multi-scenario analysis shows that the SD will have the highest habitat quality, while the BAU scenario will have the lowest. It is interesting that the ES scenario fails to have the highest capacity to protect habitat quality, which may be related to the excessive saline alkali land. Appropriate reclamation of the unused land is conducive to cultivated land protection and food security, but also improving the habitat quality and giving play to the versatility and multidimensional value of the agricultural landscape. This shows that the SD of comprehensive coordination of urban development, agricultural development and ecological protection is an effective way to maintain the habitat quality and biodiversity. View Full-Text
Keywords: habitat quality; multi-scenario analysis; FLUS; InVEST model; the Yellow River Delta habitat quality; multi-scenario analysis; FLUS; InVEST model; the Yellow River Delta
►▼ Show Figures 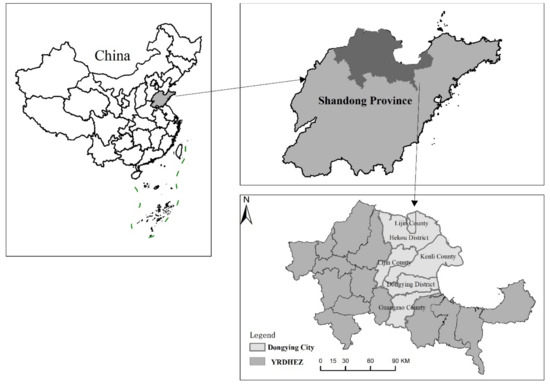