Fake News and Covid-19 in Italy: Results of a Quantitative Observational Study

Who Guides Vaccination in the Portuguese Press? An Analysis of Information Sources

Sources of information are a key part of the news process as it guides certain topics, influencing the media agenda. The goal of this study is to examine the most frequent voices on vaccines in the Portuguese press. A total of 300 news items were analysed via content analysis using as sources two newspapers from 2012 to 2017. Of all the articles, 97.7% included a source (n = 670). The most frequent were “governmental organisations”, “professional associations” and the “media”. Less frequent sources were “university scientists”, “governmental scientific bodies”, “consumer groups”, “doctors”, “scientific companies”, “NGOs” and “scientific journals”. Most articles used only non-scientific sources (n = 156). A total of 94 articles used both categories and 43 used exclusively scientific sources. Our findings support the assertion that media can be an instrument to disseminate information on vaccines. Nevertheless, despite being present in most articles, the number of sources per article was low, therefore not presenting a diversity of opinions and there was a lack of scientific voices, thus suggesting lower quality of the information being offered to the audience. View Full-Text
Keywords: content analysis; media; newspaper; public health; sources; journalism; vaccine content analysis; media; newspaper; public health; sources; journalism; vaccine
►▼ Show Figures 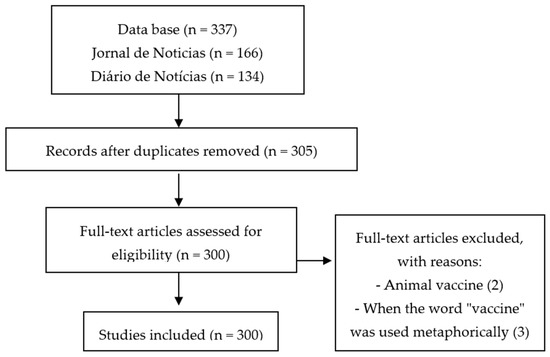 
Langbecker A, Catalan-Matamoros D. Who Guides Vaccination in the Portuguese Press? An Analysis of Information Sources. International Journal of Environmental Research and Public Health. 2021; 18(4):2189. https://doi.org/10.3390/ijerph18042189