The Critical Role of Coping Strategies in Moderating Loneliness and Quality of Life: Parallel and Unique Processes among Transgender and Heterosexual Cisgender People in Pakistan

Fibromyalgia: Evidence for Deficits in Positive Psychology Resources. A Case-Control Study from the Al-Ándalus Project

Fibromyalgia is a chronic disease characterised by widespread musculoskeletal pain and additional physical and psychological symptoms that usually include fatigue, poor sleep quality, stiffness, depression, anxiety and cognitive difficulties [1,2]. As a consequence, people with fibromyalgia report substantial functional limitations, which may lead to high health resource use and lost productivity, resulting in significantly higher costs [3,4]. In fibromyalgia, the exclusive focus on negative aspects has traditionally dominated [5]. However, positive psychology has been defined as the scientific study of positive experiences and positive individual traits [6], which refers to people’s ability to maintain positive functioning in the face of adversity and challenges [7,8].
In fibromyalgia, previous case–control research has extensively focused on the affective sources, such as positive and negative affect [9,10,11], which are the emotional components of subjective well-being, i.e., people’s evaluations of their lives [12]. In comparison to peers without fibromyalgia, those with the disease have reduced levels of positive affect and increased levels of negative affect [9,10,11]. However, scarce attention has been paid to the cognitive-, emotional- and personality-related aspects of positive psychology despite the fact that they may play a key role in adaptation to chronic pain [13]. Satisfaction with life is the cognitive component of subjective well-being, i.e., the cognitive evaluation of one’s life [12,14]. It has been observed that satisfaction with life is low in people with chronic pain [15,16]. Dispositional optimism (herein after referred to as optimism) is the generalised expectancy that good things will happen in the future and bad things will be minimal [17]. In the general population, higher optimism is related to better health [18,19,20]. In fibromyalgia, higher optimism is associated with less perceived barriers to goal attainment during disease flares [21,22]. Emotional repair is the ability that people have to regulate their emotional states themselves [23], enhancing the positive states and minimising those which are negative. In people with chronic pain, higher emotional repair is associated with lower pain [24]. Collectively, it seems that satisfaction with life, optimism and emotional repair may play a role in adaptation to fibromyalgia. However, previous case–control studies have not comprehensively characterised the levels of affective, cognitive and personality aspects of positive psychology in fibromyalgia. Addressing this gap in the knowledge may help to develop tailored therapies focused on reducing fibromyalgia deficits in positive psychology and, consequently, the severity of the disease.
Therefore, the aim of the present case–control study was to compare the levels of positive affect, negative affect, satisfaction with life, optimism and emotional repair in a large sample of women with fibromyalgia (cases) and age-matched women without fibromyalgia (controls). On the basis of the previous evidence, the hypothesis of the present study was that, in comparison to controls, women with the disease would have more unfavourable scores in all of these positive psychology resources.

Participants from the eight provinces of Andalusia (southern Spain) were recruited for the present case–control study through local fibromyalgia associations via e-mail, letter, telephone or university press. Additionally, participants with fibromyalgia (cases) were asked to recruit non-fibromyalgia (control) participants with a similar age and socio-demographic characteristics to conduct comparisons between groups. All potential participants (n = 960) gave their written informed consent after receiving detailed information about the study aims and procedures before taking part in the study. The inclusion criteria for participants with fibromyalgia were: (1) to be an adult woman (aged 18 to 65 years old); (2) to have a medical diagnosis of fibromyalgia from a rheumatologist (participants were requested to provide their medical records to confirm their diagnosis); and (3) to meet the 1990 American College of Rheumatology (ACR) fibromyalgia criteria [25,26]. The inclusion criteria for control participants were: (1) to be an adult woman (aged 18 to 65 years old); and (2) not to meet the 1990 ACR fibromyalgia criteria [25]. Additionally, fibromyalgia or control participants with either acute/terminal illness (such as cancer, stroke, recent cardiopathy, severe coronary disease, schizophrenia or any other disabling injury) or severe cognitive impairment, as defined by a score of less than ten on the Mini-Mental State Examination (MMSE) [27,28], were excluded. All tests were performed by the same trained group of researchers to reduce inter-examiner error. The study was reviewed and approved by the Ethics Committee of the “Hospital Virgen de las Nieves” (Granada, Spain), registration number: 15/11/2013-N72. The ethical guidelines of the Declaration of Helsinki (modified in 2000) were followed.

Assessments took place over three consecutive days. On day 1, the MMSE was conducted, socio-demographic data were collected and a tender point examination was conducted. On day 2, participants filled out the PANAS, SWLS, LOT-R and TMMS-ER questionnaires at home without supervision. On day 3, participants returned the questionnaires to the research team who reviewed all of them, and potential doubts were resolved.

Descriptive statistics include means and standard deviations for continuous variables as well as frequencies and percentages for categorical variables. Internal consistency of the instruments was assessed by Cronbach’s α coefficient with acceptable values ≥0.70 [39]. Before main analyses, t-test and chi-square test analysis (in continuous and categorical variables, respectively) were used to identify differences between groups (i.e., participants with and without fibromyalgia) in the potential socio-demographic confounders; namely age, marital status and education level. Statistical differences in education level between women with and without fibromyalgia were found and, thus, it was included as a covariate in all the analyses.
Multivariate analysis of covariance (MANCOVA) was conducted to compare the mean scores of fibromyalgia and non-fibromyalgia groups on positive psychology resources. In MANCOVA, the group was entered as the independent variable; all the positive psychology resources were entered as dependent variables and education level was entered as a covariate. The effect size was calculated using Cohen’s d (standardised mean differences) to compare all the positive psychology variables. Cohen’s d values were interpreted as small (~0.2), medium (~0.5) or large (~0.8) effects [40].
All analyses were performed using Statistical Package for Social Sciences (IBM SPSS Statistics for Windows, version 26.0; Armonk, NY, USA), and the level of statistical significance was set at α = 0.05 (two-tailed).

This work was supported by the Spanish Ministry of Economy and Competitiveness (I+D+i DEP2010-15639, I+D+I DEP2013-40908); the Spanish Ministry of Education (FPU15/00002), Excellence actions: Units of Excellence; Unit of Excellence on Exercise and Health (UCEES). F.E.-L. has received funding from the European Union’s Horizon 2020 research and innovation programme under the Marie Skłodowska-Curie grant agreement no. 707404. The funders of this study did not have any role in the study design, data collection and analyses, decision to publish or preparation of the manuscript.

The study was conducted according to the guidelines of the Declaration of Helsinki and approved by the Ethics Committee of the Hospital Virgen de las Nieves (Granada, Spain); registration number: 15/11/2013-N72.

We would like to thank the researchers of the cts-1018 research group, particularly Manuel Delgado-Fernández, and acknowledge the “Fibromyalgia, Chronic Fatigue Syndrome and Chemistry Sensibility Federation” (“ALBA ANDALUCIA”, association of fibromyalgia, Andalucía, southern Spain). 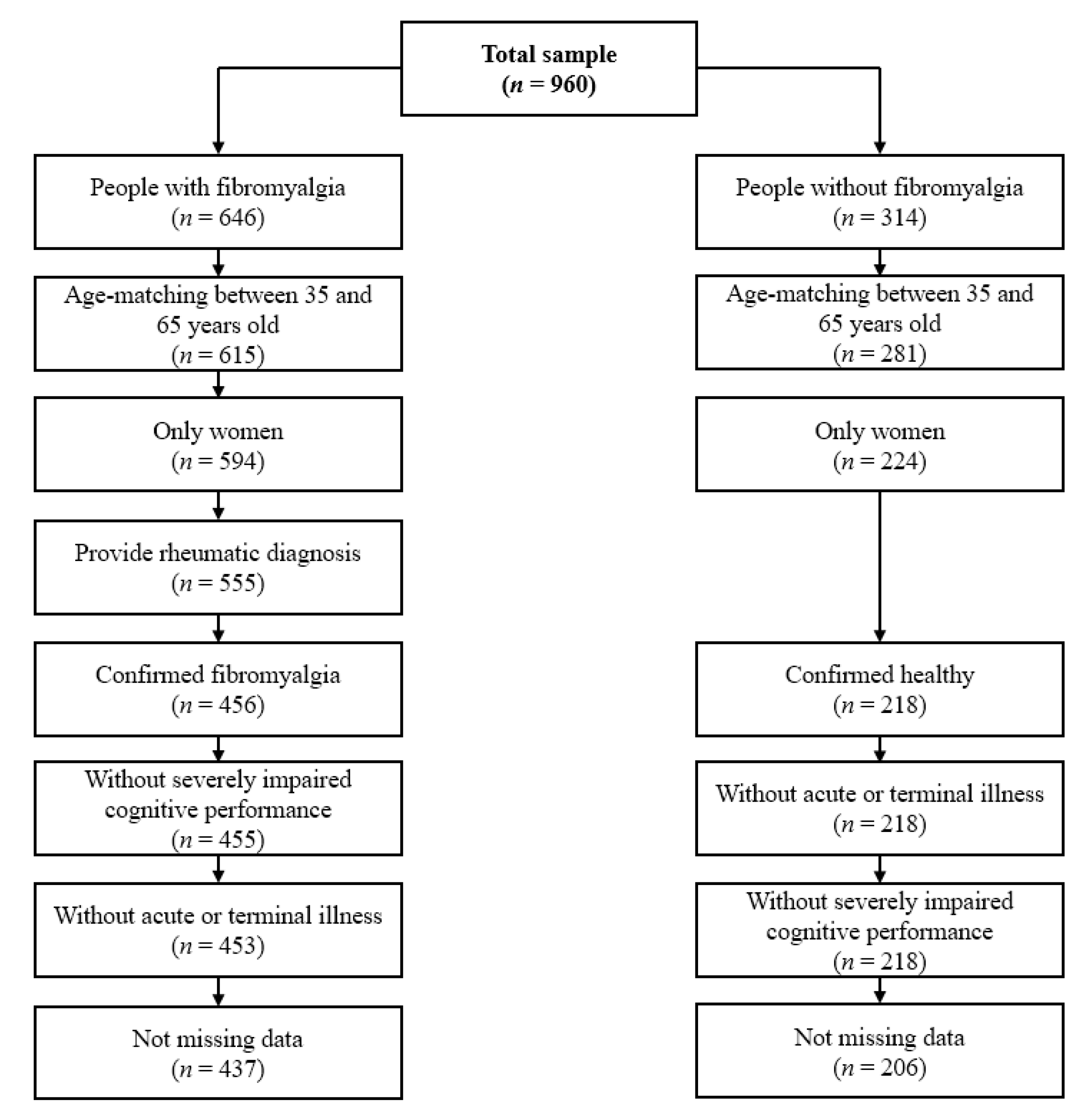