The Nutritional Condition of the Spanish Soldier: “Spain. Nutrition Survey of the Armed Forces, a Report by the Interdepartmental Committee on Nutrition for National Defence 1958”
Previous Article in Journal

The Escape from Malnutrition of Chilean Boys and Girls: Height-for-Age Z Scores in Late XIX and XX Centuries

Children’s Diet during the Early Stages of the Nutritional Transition. The Foundlings in the Hospital of Valencia (Spain), 1852–1931

:
The nutritional transition brought about profound changes in the nutrition of the European population in the 19th and 20th centuries. The predominant consumption of cereals gave way to kilocalorie-, protein-, vitamin- and mineral-rich diets that involved a greater intake of animal products. However, not all population groups underwent this transition at the same pace; socio-economic conditions, sex and age led to important inequalities. This article uses institutional sources to analyse the nutrition of children during the early stages of the nutritional transition and to compare it with that of other age groups (adult psychiatric patients). The study examines the average diets and nutritional balance of foundlings in the Hospital General de Valencia from 1852 to 1931. The main conclusion of the study is that, throughout the period under study, foundlings were exposed to a poor, traditional diet, characterized by structural deficits and imbalances. This may have affected their physical growth, health and biological wellbeing in adulthood, and demonstrates that the nutritional transition was anything but a homogeneous process.
Keywords:
living standards; nutritional transition; children nutrition; nutritional balance; hospital diets; inequality; Spain; 19th and 20th centuries

Over the last century, an intense historiographical debate has discussed the evolution of the living standards of the working class during the process of industrialization, involving the examination of demographic, economic, anthropometric and wellbeing indicators. Within this broad historiographical trend, increasing attention has been paid to the evolution of alimentary patterns and changes in diet structures. The growing consumption of kilocalories, proteins and animal fats, which partially replaced the traditional diet based on cereals and other vegetal foodstuffs, between the mid-19th century and the first half of the 20th century, is a process known as the nutritional transition. In Spain, this process began later than in other European countries, owing to a belated economic and industrial development. This slowed down a series of processes that the specialised literature has identified as key for the nutritional transition, including increased income levels, improved production and distribution of animal products, scientific–technical advances and urbanisation, among others [1,2,3,4,5,6].
The nutritional transition and its kilocalorie-, protein- vitamin- and mineral-rich diets improved the nutrition of the Spanish and European populations. This had a direct effect on mortality rates, life expectancy, height and health [7]. However, it is reasonable to ask if all population groups enjoyed the advantages of the nutritional transition equally, and thus to determine the effect of inequality factors such as socio-economic status, sex and age [8,9].
Nutritional needs change with age (Life Course Perspective) and are particularly sensitive to income, so it is not unreasonable to think of children as being particularly vulnerable to nutritional deficits, especially when they depend on family units within which food resources are unevenly distributed. Studies based on the resource dilution model suggest the possible impact of family size on the allocation of childcare duties on children [10]. In terms of food consumption, attempts have been made to validate the model based on differences in stature [11,12]. However, historiography has paid little attention to child nutrition, with a few exceptions, such as Crawford’s study of Irish workhouse diets in the 19th century [13]. The children hosted by this institution ranged in age from 9 to 15 years, and their diets were based on potatoes and bread; Hawkins and Tanner examined the alimentary practices of a British children’s hospital in the 19th century and the early 20th century, emphasizing the therapeutic value assigned to nutrition in these institutions to care for urban working-class children who arrived to hospital in poor physical and nutritional condition [14]. More recently, Scholliers studied the nutrition of children (aged 2–14) in the 19th century based on the regulations of two hospitals in Brussels. This author argues that no general trends about child nutrition in Europe can be established, although there is solid evidence that it followed a similar path to adult diets (but they were always comparatively poorer). Scholliers concludes that child nutrition deteriorated during the first half of the 19th century, to improve rapidly in the second half of the century, especially in the decades that followed the First World War [15,16]. Studies which are not based on institutional diets agree that child nutrition during this period was highly deficient [17,18].
The primary aim of this article is to assess child nutrition in the context of the early stages of the nutritional transition through the analysis of institutional sources, which can provide valuable evidence for the issue at hand, as well as to outline some of the factors that affected this change in the diets. Specifically, we have examined the diets of foundlings in the Hospital General de Valencia from 1852 to 1931 in order to establish their main characteristics and evolution over time, and estimate some of the possible causes of these diet changes and their nutritional balance in comparison with other hospital diets. The composition of the diet takes into account foodstuffs consumed, kilocalorie content and nutritional balance, and is compared with the Recommended Dietary Allowances (RDA) [19], which are especially important for child development.
The paper is organized as follows. Following the Introduction, the Materials and methods sections describes in detail the sources and methodologies used. The Results section analyses the evidence, which is contextualized and interpreted in the Discussion section. Finally, the paper closes with a Conclusions section.

This article has analysed changes in the diet of foundlings in the Hospital General de Valencia in the context of the early stages of the nutritional transition. This has enabled us to accurately outline the nutritional deficiencies faced by infants, in line with other studies about infant nutrition in Western Europe. The data presented give a quantitative perspective of an issue that is often formulated qualitatively. The use of hitherto underexploited sources has made it possible to determine the nutritional profile of the diets and, therefore, their differences with those provided to adult psychiatric patients. Foundlings were among the most unprivileged social groups, and their diet was based on traditional foods and generally poor in vitamins, so that by the 1920s they had barely begun to feel the positive effects of the nutritional transition. These dietary differences were especially significant concerning animal-based foodstuffs, which were more expensive.
All this emphasizes that the nutritional transition was anything but a homogeneous process, and that it did not involve a generalized change in diet structures. During the whole period under study, the diet of foundlings was characterized by structural imbalances and deficits, although things improved in the opening decades of the 20th century. Valencian foundlings faced important deficits in vitamins and some minerals, owing to the excessive predominance of cereals in their diet and the insufficient quantities of animal products, fruits and vegetables consumed. This could affect their growth, health and biological wellbeing later in life.
These results can also contribute to a more fact-based approach to the evolution of sanitary conditions during the whole life cycle. As reliable primary sources are scarce, no studies have yet addressed the relationship between infant nutrition and growth in later stages from a historical perspective, a pending challenge for historical research. However, anthropometric history has put forward some evidence upon which some tentative hypotheses can be based. According to the literature, the height of Mediterranean Spanish 21-year-old adults barely increased during the second half of the 19th century, growing at a faster pace from the late 19th century and, especially, the 1920s onwards [61,62]. This trend is particularly pronounced among low-income social groups [62,63]. Many environmental factors affect height, but nutrition is one of the most important among them. Was the evolution in the height of army recruits in the second half of the 19th century related to the deficits in infant nutrition reflected in hospital diets, and to the general improvement of the diet in the 20th century? Historiography must address these questions in the future by digging out reliable primary sources that enable us to reconstruct past diets, especially among the most vulnerable social groups.

We are grateful to Roser Nicolau for her comments and suggestions. This article has also benefited from the comments of the journal’s referees. Obviously, all errors remain our own. 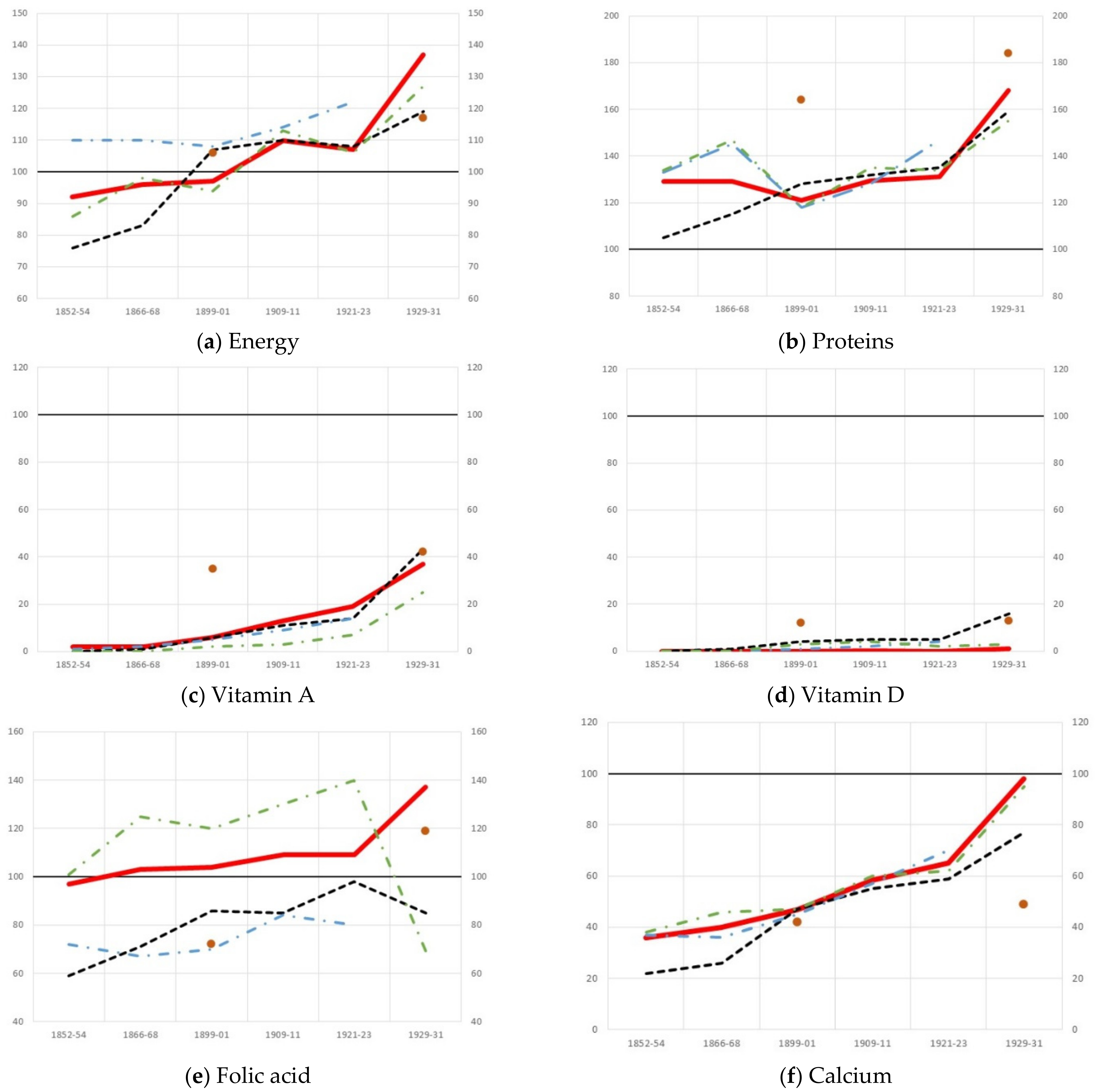