Organization of a Hospital Ward Aimed at Admitting Patients with SARS-CoV-2: An Economic and Epidemiological Perspective
Previous Article in Journal

Aedes albopictus is a cosmopolitan mosquito species capable of transmitting arboviruses such as dengue, chikungunya, and Zika. To control this and similar species, public and private entities often rely on pyrethroid insecticides. In this study, we screened Ae. albopictus collected from June to August 2017 in Mecklenburg County, a rapidly growing urban area of North Carolina, for mutations conferring pyrethroid resistance and examined spatiotemporal patterns of specimen size as measured by wing length, hypothesizing that size variation could be closely linked to local abundance, making this easily measured trait a useful surveillance proxy. The genetic screening results indicated that pyrethroid resistance alleles are not present in this population, meaning that this population is likely to be susceptible to this commonly used insecticide class. We detected no significant associations between size and abundance-related factors, indicating that wing-size is not a useful proxy for abundance, and thus not useful to surveillance in this capacity. However, mosquitoes collected in June were significantly larger than July or August, which may result from meteorological conditions, suggesting that short-term weather cues may modulate morphological traits, which could then affect local fecundity and virus transmission dynamics, as previously reported. View Full-Text
Keywords: Aedes albopictus; pyrethroid resistance; morphological traits; weather cues Aedes albopictus; pyrethroid resistance; morphological traits; weather cues
►▼ Show Figures 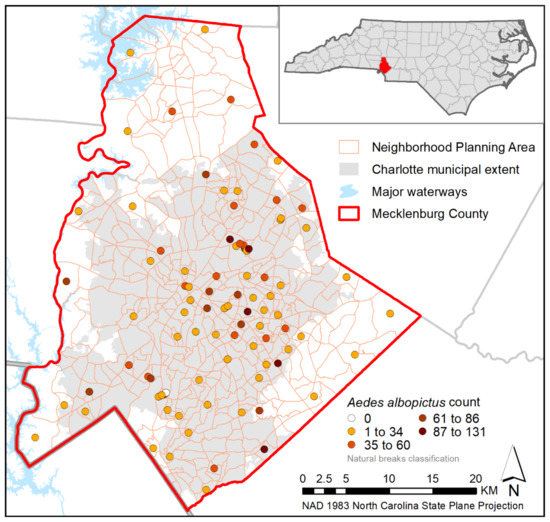