“We Have to Be Strong Ourselves”: Exploring the Support Needs of Informal Carers of Aboriginal and Torres Strait Islander People with Cancer
Previous Article in Journal

‘The Little Engine That Could’: A Qualitative Study of Medical Service Access and Effectiveness among Adolescent Athletics Athletes Competing at the Highest International Level

The natural environment has profoundly affected and restricted human behavior and life, especially in the early years with low productivity and underdeveloped technologies. The natural environment has an irreplaceable influence on human society’s formation and it shapes human personality characteristics, such as risk appetite, cooperation preference, and dedication [36]. Following Bjørnskov [7], Nannestad [37] and Uslaner [38], we use similar questions from large-scale survey to measure social trust. The social trust data that we employ in this article is from the 2012 China Family Panel Studies (CFPS). China Family Panel Studies is a national, large-scale, multidisciplinary social tracking survey project which is conducted by China Social Science Research Center of Peking University since 2010. The samples in this survey cover 25 provinces across the country. The CFPS survey questionnaire has four questionnaires for specific groups: community questionnaire, family questionnaire, adult questionnaire and children questionnaire.
We use adult questionnaire data in 2012 in this article. The 2012 China Family Tracking Survey (CFPS) adult data observations used in this paper are distributed in 231 counties, covering 25 provinces, cities and autonomous regions across the country. In the adult questionnaire tracking survey, two questions directly measure social trust. The first question is: “Generally speaking, do you think most people can be trusted, or you can’t be too careful”? The respondents have two options: one is “most people can be trusted”, and the other one is “you can’t be too careful”. We use the answer to this question to represent the generalized trust level of the respondent. Specifically, if the respondent chooses the first option, his generalized trust level is high, and we set the variable generalized trust = 1. Otherwise, generalized trust = 0. Besides, this survey has another question regarding social trust, which is “Please score your trust for the following categories of people from 0–10: parents, neighbors, Americans, strangers, cadres, and doctors. 0 means very distrustful, and 10 means very trusting”. The second question’s answer shows respondents’ trust in some specific groups of people that they often come into contact with or barely come into contact with. By adding up the scores to those six specific groups of people, we can measure the average level of social trust in specific groups. The descriptive statistics of the general trust and the trust of specific groups of the samples are involved in Table 1. When human beings face external risks such as flood and drought, they need to cooperate to resist threats. Thus, social trust may be influenced by natural disasters.

2.2. Data of Long-Term Natural Disasters and Other Variables

China has a vast territory and a large geographical span. There are big differences in geographical environment and climatic conditions between the South and the North. In addition, the different types of major food crops in the North and South will lead to differences in human behavior when resisting the risk of external natural disasters, which in turn affects the general trust in others in different regions. In order to ensure the robustness of the results of this paper, based on the previous research, this paper divides the respondents to those residents in the North and in the South. Table 5 reports the results of this split-sample regression. The frequency of long-term natural disasters significantly affects the people’s general trust, regardless of whether the respondent lives in the South or in the North; the higher the frequency of natural disasters, the higher the general trust in the region, which is consistent with the results above. Interestingly, the regression of the southern subsample shows that floods have a significant impact on the general trust of the region, while the impact of drought is not significant. The regression of the northern subsample shows just the opposite. A possible explanation is that flood, the disaster that particularly destroys rice production, occurs more frequently in the South, where rice is the dominant crop; therefore, floods have a more significant impact on trust in the South. On the other hand, the main food crop in northern China is wheat, a crop that is fairly fragile to droughts. Unfortunately, droughts occur frequently in northern China, so they generally have greater impacts on trust in the northern areas.

Funding support from the Natural Science Foundation of China (71873121) is gratefully acknowledged.

The datasets used and analyzed in the current study are available from the corresponding author on reasonable request. 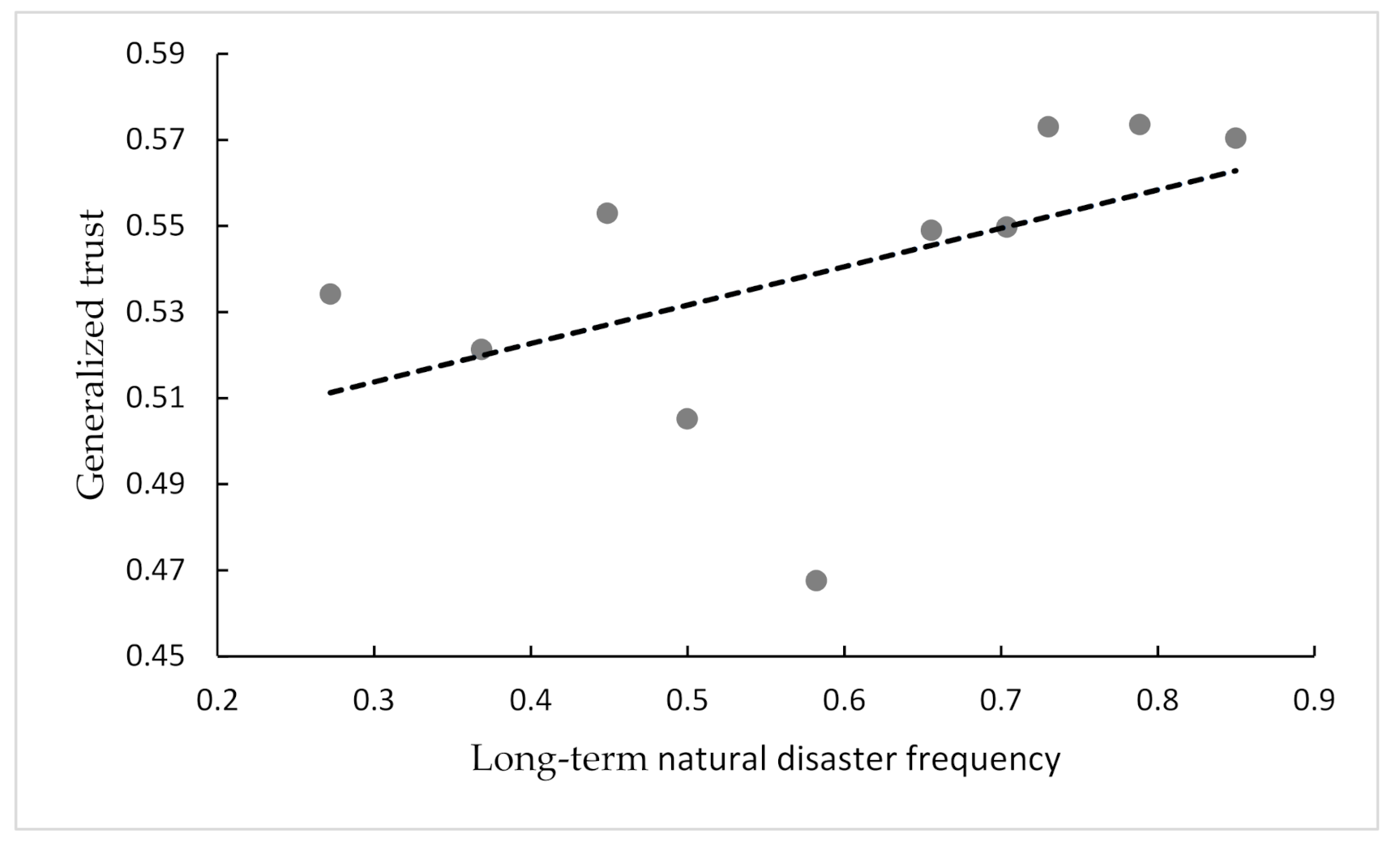 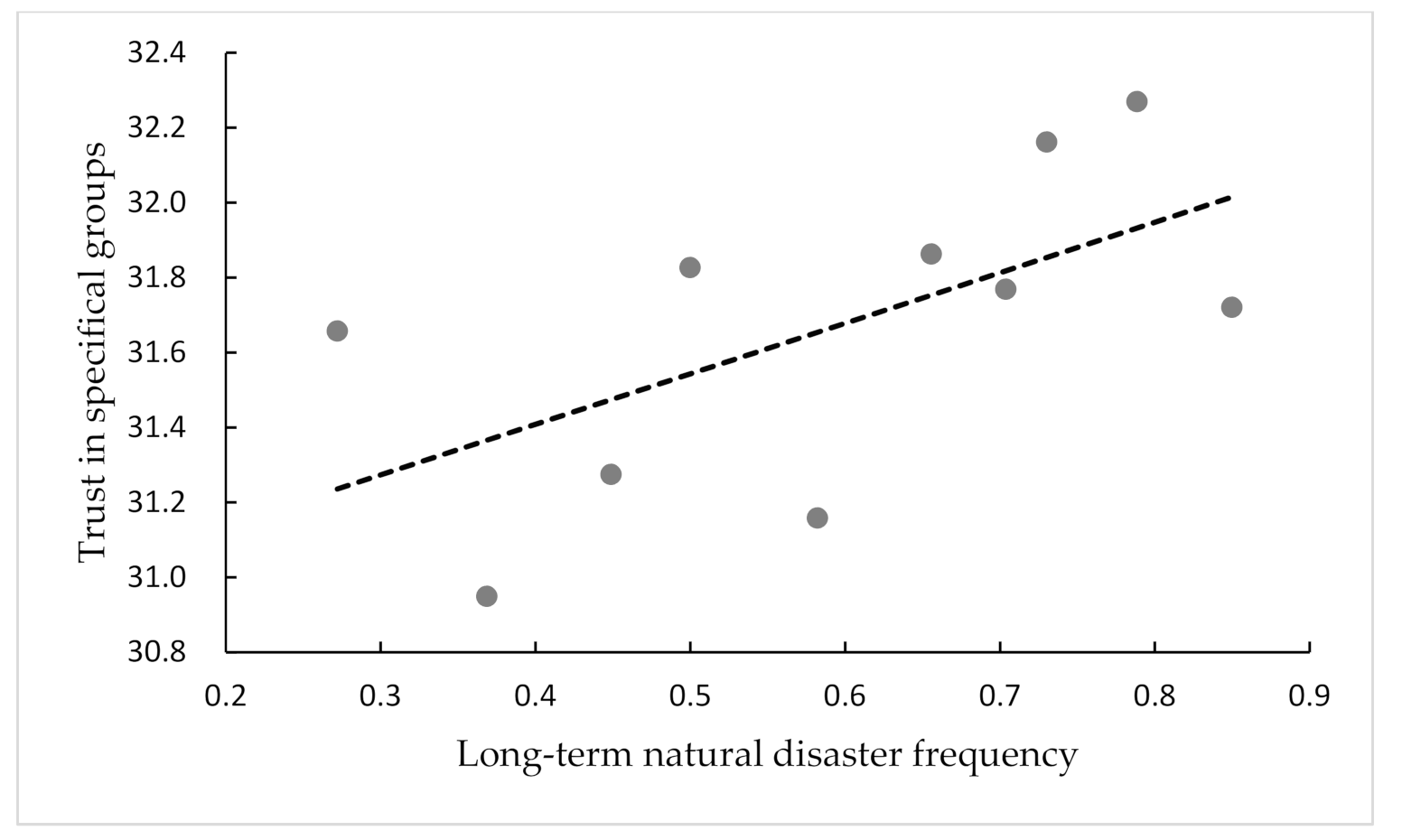