Impact of Malocclusion, Tooth Loss and Oral Hygiene Habits on Quality of Life in Orthodontic Patients: A Cross-Sectional Study
Previous Article in Journal

This Italian observational real-world study aims to assess in chronic hepatitis C virus (HCV) patients treated with pangenotypic direct acting agents (pDAAs) glecaprevir/pibrentasvir (GLE/PIB) or sofosbuvir/velpatasvir (SOF/VEL) the potential drug–drug interactions (DDIs) with concomitant medications prescribed, with a focus on cardiovascular and system nervous (CNS) co-medications. Data were collected from administrative databases covering 6.9 million health-assisted individuals. All patients prescribed SOF/VEL or GLE/PIB between 11/2017 and 12/2018 were included. Patients were analyzed while on DAA. DDIs were identified according to the Liverpool University tool. Overall, 3181 HCV patients were included: 1619 in the GLE/PIB cohort and 1562 in the SOF/VEL cohort. SOF/VEL patients were generally older than GLE/PIB ones (mean age 58.4 vs. 53.1, p < 0.001) and had more cardiovascular and CNS comorbidities (58% vs. 42%, p < 0.001 and 33% vs. 28%, p = 0.002, respectively). Contraindications due to DDIs in the GLE/PIB cohort affected 9.3% and 3.2% of patients before and on DAA, respectively, while the percentages in the SOF/VEL cohort were 3.2% before and 0.4% after pDAAs initiation. Among GLE/PIB patients, 2.7% had cardiovascular drugs (all statins) contraindicated while on DAA. The potential DDIs between cardiovascular drugs and SOF/VEL were mainly with statins (5%). SOF/VEL was prescribed in patients with older age and with more cardiovascular and CNS comorbidities. Despite this, a proportion of contraindicated drugs lower than that of GLE/PIB was registered. View Full-Text
Keywords: drug–drug interactions; glecaprevir/pibrentasvir; HCV; sofosbuvir/velpatasvir drug–drug interactions; glecaprevir/pibrentasvir; HCV; sofosbuvir/velpatasvir
►▼ Show Figures 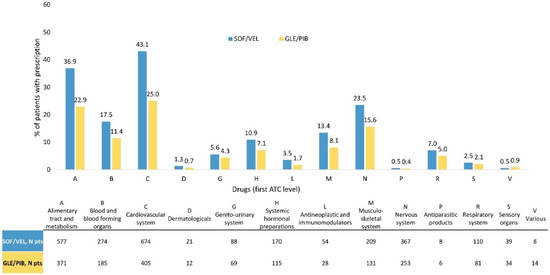