Burnout in Intensive Care Unit Workers during the Second Wave of the COVID-19 Pandemic: A Single Center Cross-Sectional Italian Study

Proposal for the Inclusion of Tobacco Use in Suicide Risk Scales: Results of a Meta-Analysis

When a person decides to attempt suicide, their whole environment falls into disarray. Each year, around 800,000 people take their own life globally [1]. Suicide is the leading cause of external death in countries such as Spain, where its incidence is well above that of deaths caused by traffic accidents [2]. Furthermore, for each death by suicide, there are more than 20 attempted suicides [1]. Despite these figures, the social stigma associated with suicide [3] and taboos and silence that surround it for fear of the ‘contagion effect’ [4], may be one reason why it is not prioritized as an essential public health problem. For this reason, we believe that the creation of prevention measures is of vital importance.
In contrast, in 2018, a total of 1337 million people worldwide were smokers [5], despite efforts by world governments to curb this habit. Considering that numerous studies suggest that tobacco use increases suicide risk [6,7,8,9], further research is warranted to deepen our scientific understanding of this relationship. Many of the risk factors for suicide are also risk factors for being a smoker: being young, non-white, lower income, less education, unmarried, unemployed, less religious, anxiety, depression, psychoses, substance use problems, low self-esteem, risk taking, having a serious physical illness, impulsivity, aggression, and antisocial personality [7]. This may allow tobacco use to be included in the suicide risk assessment protocols, and treatment of this addiction could be considered a social health intervention for implementation alongside other suicide prevention measures. However, the main suicide risk assessment instruments, such as the SAD PERSONS scale [10], do not currently include smoking as an independent predictive factor.
Previous meta-analyses conclude that smoking is associated with a higher risk of completed suicide [11]. However, we do not know how smoking could influence the rest of the suicidal spectrum behaviours, since we have not found any prospective meta-analyses that analyse each of these behaviours separately. In the case of concluding that such association exists, we would be closer to considering smoking as a modifiable risk factor for suicide.
Therefore, the objective of this present study was to carry out a meta-analysis (MA) of prospective cohort studies that assessed the magnitude of the relationship between tobacco use and the suicidal spectrum (autolytic ideation, suicidal plan, suicide attempt, and death by suicide). Previous suicide ideation is the most robust predictor of later ideation. Prior non-suicidal self-injuries or suicide attempts confer the most risk for later suicide attempts and previous suicide attempts and suicide ideation are among the strongest predictors of suicide death [7]. Our hypothesis was that the risk of implementing suicidal behaviours would follow the following order: smokers > ex-smokers > non-smokers. In contrast to previous studies [11,12], we considered every dimension of the suicidal spectrum and included studies from all over the world, without excluding populations with mental illnesses, such as substance-related disorders.

This report was prepared according to the PRISMA guidelines for reporting in systematic reviews and meta-analyses [13]. The protocol was registered with the Prospero Centre for Reviews and Dissemination on 13 July 2020 (CRD42020197569), available at the following address: www.crd.york.ac.uk/PROSPERO/display_record.php?ID=CRD42020197569 (accessed on 4 June 2021).

We searched for relevant studies in the PubMed, Cochrane library, Scopus, Web of Science, TRIP, and SCIENCE DIRECT databases on 24 August 2020. The search terms were ‘suicide OR suicidality OR suicidal OR self-inflicted death OR completed suicide’ AND ‘smoke OR smoking OR tobacco OR cigarette OR cigar OR nicotine OR tobacco use disorders OR electronic cigarette OR smokeless tobacco’ AND ‘prospective OR follow OR longitudinal OR cohort OR risk ratio OR hazard ratio OR survival analysis OR follow up OR relative risk’. We also reviewed the list of citations included in these articles, reviews, and meta-analyses.

The following inclusion criteria were applied: (1) prospective cohort design; (2) the exposure of interest was the smoking habit itself; (3) the participants were classified as non-smokers (NS), former smokers (FS), or current smokers (CS); (4) outcomes were suicidal ideation (thoughts about committing suicide), suicidal plans (making a plan for committing suicide), suicidal attempts (attempting suicide), and/or death by suicide; (5) original papers reporting relative risks (RRs) or hazard ratios (HRs) and their 95% confidence intervals (CIs) of suicidal ideation, plans, attempts, and/or deaths by suicide (or data to calculate these) were provided.
The exclusion criteria were as follows: (1) case–control, cross-sectional, or retrospective designs; (2) did not distinguish between current and former smokers; (3) the exposure was the age of initiation of smoking or high versus low smokers were compared; (4) mixed outcomes (suicidal behaviour, accidents, and violence) were reported, and the risk of suicidal behaviour could not be separated from among these data.
Prospective cohort studies in any type of population were used in this MA, irrespective of language, publication data, nationality, race, age, and gender.

The articles assessed for eligibility were divided into two parts; two authors independently extracted the information from each half (a total of four researchers) by using a standardised form and resolving any disagreements though discussion with the other two authors until a consensus was achieved. The variables extracted from the studies were author names, year, country, language, study population, sample size, sample age, gender, follow-up duration, study quality evaluated through the Newcastle–Ottawa Scale (NOS; [14]), smoking exposure (NS, FS, and CS), suicidal outcomes (ideation, plans, attempts, and/or death), and RRs or HRs and related 95% CIs (preferably with the most adjusted factors). When these data were not provided directly, they were calculated using the data provided.

We used the RR and their 95% CIs to state the association between smoking and suicidal behaviours and employed a random-effects model. We performed the statistical analyses using Epidat 3.1 software (Xunta de Galicia, A Coruña, Spain; Pan American Health Organization (WHO), Washington, DC, USA). Because this program was designed in Spain, in its outputs the decimals are expressed with commas. Therefore, in Figures 2–5, commas are to be interpreted as decimal points.

The NOS [14] was used to evaluate the methodological quality of the studies included. This scale allocates a maximum of nine stars to the domains: selection, comparability, exposure, and outcome of studies.

We performed a sensitivity analysis by repeating the MA the same number of times as selected studies (N = 20), each time omitting one study and combining all the remaining one and plotting influence graphs. We decided whether we needed to analyse subgroups of studies by performing heterogeneity and sensitivity analyses.

Our initial search returned 3800 articles. We eventually included 20 articles in this MA; Figure 1 shows the evaluation process we followed to select these studies.
Of the 20 selected articles, 15 examined deaths by suicide, 3 looked at suicidal ideation, and another 3 investigated suicide attempts. Although the results obtained regarding suicidal ideation and suicide attempts were unreliable because we found very few studies examining these areas, we included them for informational purposes. We only found one article that had studied suicide plans (FS RR = 1.20, 95% CI [0.60, 2.40]; CS RR = 1.50, 95% CI [0.90, 2.80]) and so the MA could not be carried out for this part of the spectrum. An MA was carried out for the relationship between exposure to tobacco (FE and CE) and all suicidal behaviours (ideation, plans, attempts, and death). Finally, to assess whether there was a difference between male and female smokers, the studies that presented gender data were selected and a separate MA was performed for each sex (6 studies for women and 9 studies for men). Table 1 shows the characteristics of the studies included in these meta-analyses [15,16,17,18,19,20,21,22,23,24,25,26,27,28,29,30,31,32,33,34]; all included studies were in English.

3.2. Smoking and Risk of Death by Suicide

3.3. Smoking and Risk of Suicide Ideation

3.4. Smoking and Risk of Suicide Attempts

3.5. Smoking and Risk of Suicidal Behaviours

The risk of death by suicide is 2.5-times higher among smokers. Men who smoke have twice the risk of suicide, while female smokers have an even higher risk (a 2.5-fold increase). Exposure to tobacco, whether present or past, almost doubles the risk of presenting some behaviour on the suicidal spectrum (ideation, plans, attempts, or death by suicide). Thus, the systematic evaluation of tobacco use should be included in every patient assessment (particularly in individuals at an apparent risk of suicide) and the treatment of smoking ought to be part of suicide prevention strategies.

I.E. and A.B. designed the study. I.E. performed the database search. I.E., M.C., A.J. and A.B. selected the articles and extracted the information. R.M. and G.H. resolved disagreements, supervised and wrote the study, and obtained the resources and funding for the work. A.B. did the data analysis and wrote the material and methods and results sections. I.E., M.C., A.J., R.M. and G.H. wrote the introduction and discussion sections. All authors have read and agreed to the published version of the manuscript.

This research was funded by Research Foundation of the Provincial Hospital of Castellón, grant numbers CAF-20-036 and CAF-20-037.

Data from this study are available from the corresponding author on request.

The authors have no conflict of interest to declare. The funders had no role in the design of the study; in the collection, analyses, or interpretation of data; in the writing of the manuscript, or in the decision to publish the results. 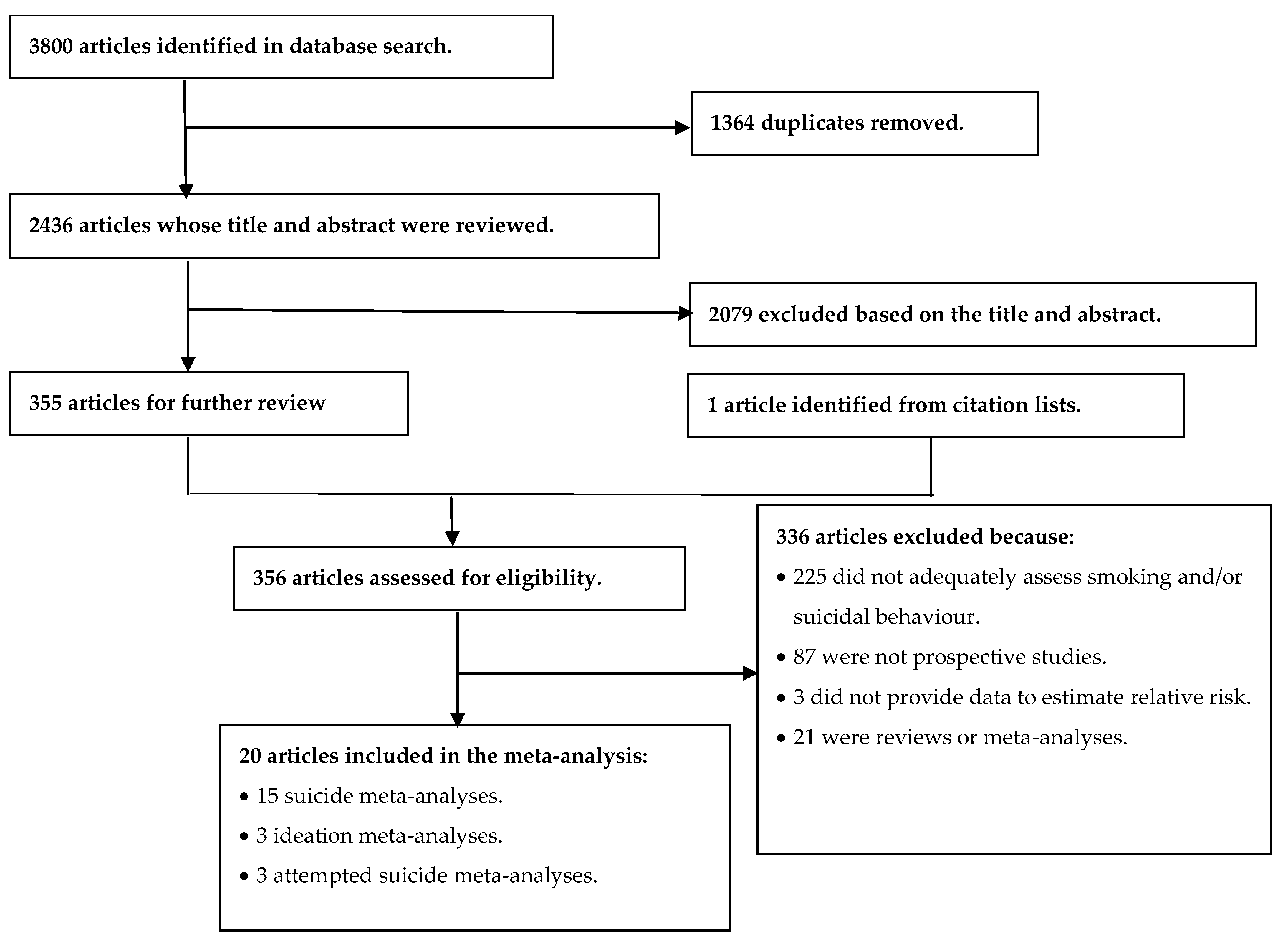 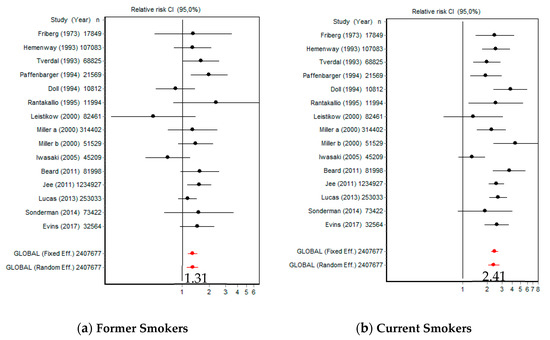 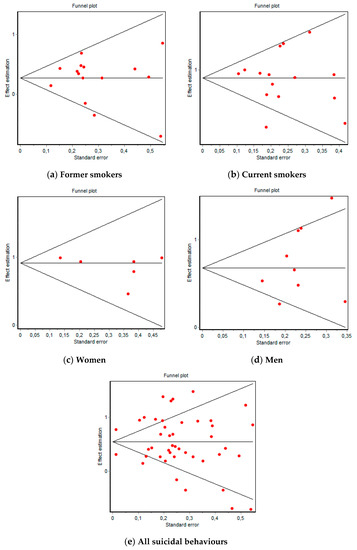