The Relationship of School Start Times, Sleep Duration and Mental Health among a Representative Sample of High School Students in Colorado, 2019

This study investigated the PAH levels in Wistar rats exposed to ambient air of the Port Harcourt metropolis. Twenty Wistar rats imported from a nonpolluted city (Enugu) were exposed to both indoor and outdoor air. Following the IACUC regulation, baseline data were obtained from 4 randomly selected rats, while the remaining 16 rats (8 each for indoor and outdoor) were left till day 90. Blood samples were obtained by cardiac puncture, and the PAH levels were determined using Gas Chromatography Flame-Ionization Detector (GC-FID). GraphPad Prism (version 8.0.2) Sidak’s (for multiple data set) and unpaired t-tests (for two data sets) were used to evaluate the differences in group means. Seven of the PAHs found in indoor and outdoor rats were absent in baseline rats. The mean concentrations of PAH in indoor and outdoor animals were higher than those of baseline animals, except for Benzo(a)pyrene, which was found in baseline animals but absent in other animal groups. Additionally, Dibenz(a,h)anthracene, Indeno(1,2,3-c,d)pyrene, Pyrene, 2-methyl, and other carcinogenic PAHs were all significantly higher (p < 0.05) in outdoor groups. The vulnerable groups in Port Harcourt are at the greatest risk of such pollution. Therefore, urgent environmental and public health measures are necessary to mitigate the looming danger. View Full-Text
Keywords: particulate matter; polycyclic aromatic hydrocarbons; Port Harcourt metropolis; Wistar rats particulate matter; polycyclic aromatic hydrocarbons; Port Harcourt metropolis; Wistar rats
►▼ Show Figures 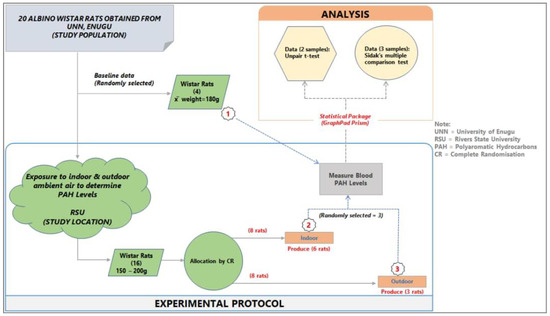